Fischer has been busy upgrading their alpine touring (AT) boot line up with a refresh of their popular Transalp Series. They eliminated the Transalp Pro and made room for the Ranger Free series of boots which come in a 130, 120, 100 and 90 flex rating and are named accordingly. There is also a women’s version in a 110 and 90 flex. These new Ranger Free DYN Boots are a freeride touring boot for those who want to ski aggressively with maximized stiffness and minimal weight. The Travers boots remain in Fischer’s arsenal as their lightest ski touring boot and compliment the more versatile Transalp and Ranger Free options. In this review, we’ll focus on the Fischer Ranger Free 130 Walk DYN Boots and discuss how they fit, walk and ski. 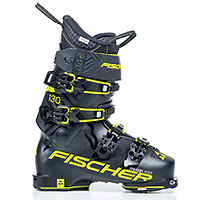 The Fischer Ranger Free 130 AT Boots are freeride touring boot that will take you anywhere to ski anything. 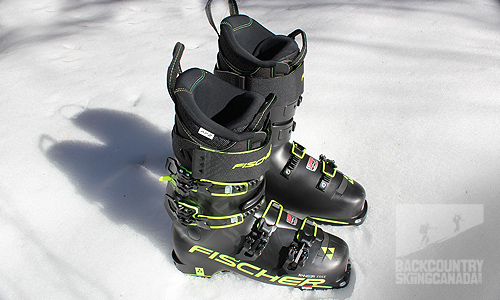 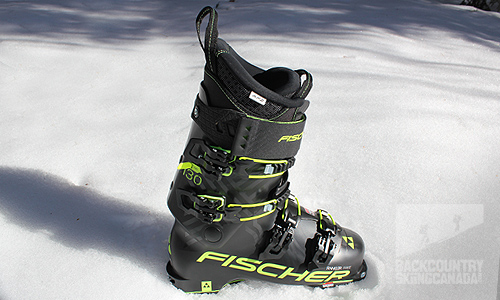 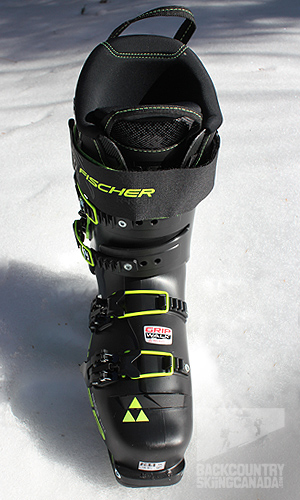 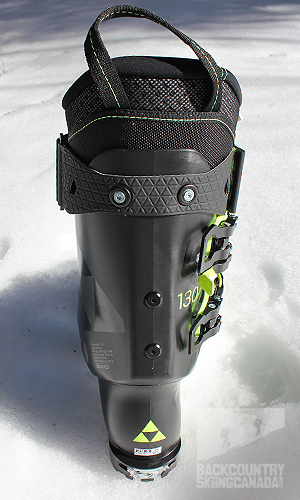 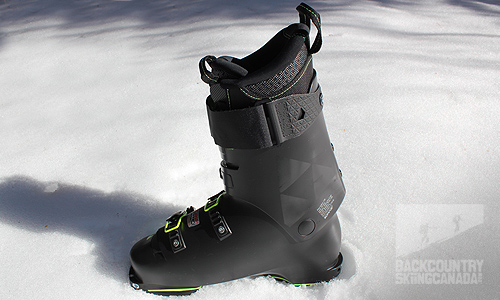 While not the lightest boot in the freeride touring category given the Ranger Free 130’s beefier liner and alpine style buckles, it still comes in at a respectable 3,120g for the pair. This four buckle overlap construction boot looks and feels very alpine in nature and provides an impressive 130 flex rating but its full Grilamid shell and cuff keep it much lighter than traditional alpine boots. The integrated ski/walk mechanism is activated by a small lever located under the top buckle and provides 55° range of motion. The low cable tension makes the lever easy to switch from ski to walk and back again with very little effort. Its convenient location means that you can open and close it in conjunction with the top buckle to maximizes the boot’s mobility. In order to take full advantage of the Ranger Free 130’s 55° cuff rotation, you’ll have to fully unbuckle the top two buckles and power strap. The built-in latch catchers on the top two buckles ensure that they won’t come lose and clank around in walk mode. 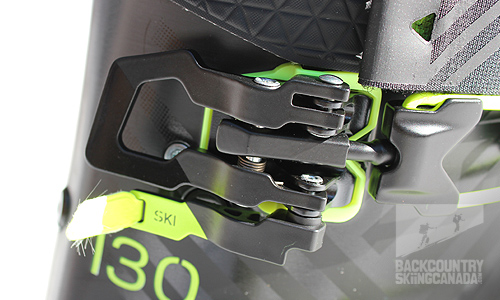 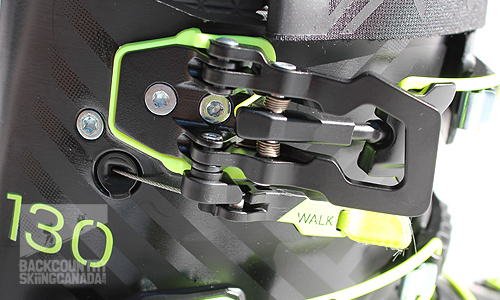 Inside the shell the ski/walk mode mechanism is easily accessible should you need to do some maintenance. 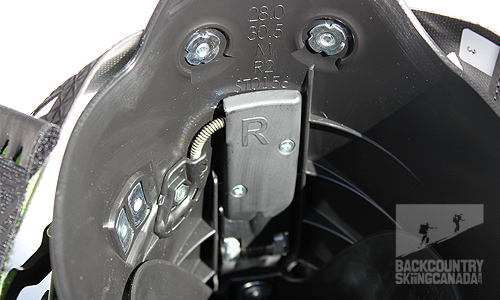 On the bottom of the Ranger Free 130’s you’ll find GripWalk soles rather than a traditional full length Alpine Touring Vibram sole. These soles can be replaced should they wear out or become damaged and can also be swapped out for alpine soles which are available separately. This makes the Ranger Free 130’s compatible with GripWalk and MNC bindings as well as Walk to Ride (WTR) or Multi-Norm Certified (MNC) bindings. 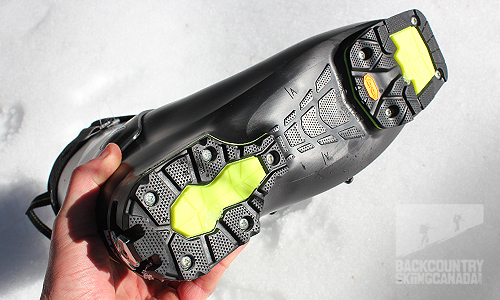 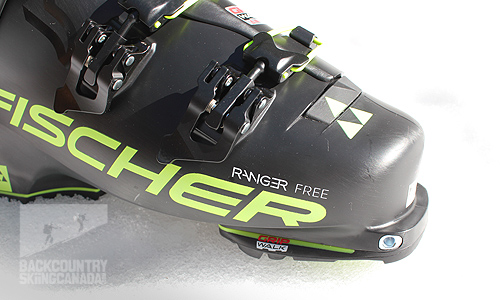 The 50mm velcro power strap is basic but does the job it needs to do. 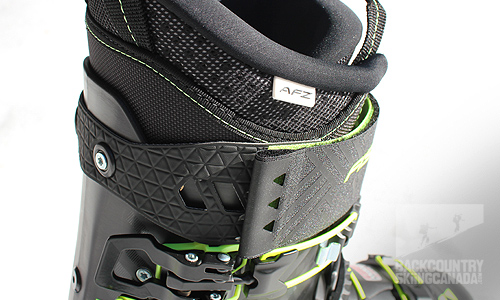 The liners are comfortable and plusher than standard AT boot liners. 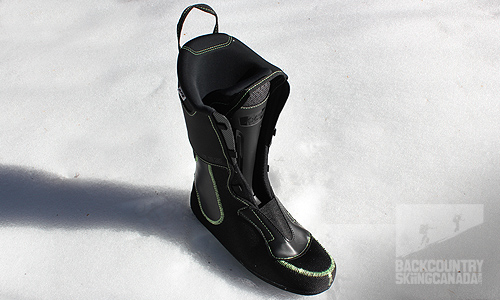 Fischer’s Ranger Free 130 Walk DYN Boots are a freeride touring boot similar to the Atomic Hawx Ultra XTD 130, Nordica Strider Pro 130 Dyn, Scott Superguide Carbon, Tecnica Zero G Guide Pro and to some extent even the Tecnica Zero G Tour Pro Boots. All of these are four buckle overlap construction AT boots with about the same amount of cuff rotation and a 130 flex. While only the Nordica Strider Pro 130 is heavier, this doesn’t mean that the Ranger Free 130 is heavy by any means but it is at the top end of this category. This is, however, why the Ranger Free 130 is more of a freeride touring / resort boot rather than a dedicated AT boot which is made for lapping up vert on big days and ski traverses.

I found the Ranger Free 130’s flex pattern to be progressive, starting softer initially before slowly increasing in resistance and stiffening up the deeper it was pushed. I was expecting something more attuned to a true alpine boot but was pleasantly surprised, especially given the overlap construction design of this boot. On the flip side, the Ranger Free 130’s 55° of cuff rotation was impressive for a burly AT boot. To take advantage of the full 55° in walk mode it’s necessary that you loosen the top two buckles and the power strap. This extra step provides a nice deep forward flex which is impressive for a freeride touring boot. The only issue that may arise is that since the flex is so deep, the top and forefoot buckles can come in contact with one another and make some noise on the skin track. Although the Ranger Free 130’s not quite in the same class as a dedicated AT boot such as the Scarpa Maestrale which are much lighter and only have a three buckle configuration, they still got the job done.

The Ranger Free’s slim 99mm last feels much roomier than advertised although the heel pocket did require some boot fitting love in order to work for me as it was initially quite loose. My average to slightly wider foot didn’t quite fit the volume that the Ranger Free 130’s provided, customer footbeds helped rectify this, however.

I found that the Ranger Free 130’s skied well in challenging conditions and provided good feedback and input to and from the ski. Switching over to walk mode was easy and rather effortless given that Fischer used a low tension cable mechanism. I was expecting much more muscle to be required in order to switch from walk to ride like with the Dynafit Hoji Pro Tour Boots. Although this cable design adds complexity to the ski/walk mechanism I have had no problems to date and see that it’s easy to access and take apart should something go wrong.

If you are looking for a lighter more AT specific boot then perhaps hold out until fall 2019 when Fischer will once again be upgrading their Travers Boot line. I got a sneak peek at the recent Winter Outdoor Retailer Show and there are big things coming for Fischer.