There is no denying the fact that the sport of backcountry skiing is on a tear. It’s the only segment of snow sports that is growing at the moment. It’s the reason you’ll see the big players like Atomic and Salomon coming out with new ski touring specific gear. Not everyone, however, wants to be a euro-rando-racer, some just want to be able to tear up the resort and head out for a few backcountry laps without having their gear slow them down in either discipline. It only makes sense then that Atomic, who is #1 in ski sales and #2 in boots, utilize their wealth of experience to design an alpine touring boot that can ski like an all mountain boot. To do this, Atomic combined the power and all-mountain capability of their Hawx Ultra freeride ski boot with the natural movement and lightweight characteristics of their successful Backland Carbon AT boots. The result is what Atomic is calling their “Cross Over” Hawx Ultra XTD 130 Boots. We got a sneak peek at this new Atomic AT Boots this spring so that we could give you our thoughts and impressions prior to its 2017/18 release. 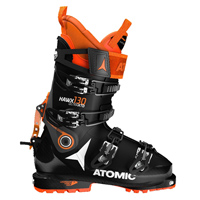 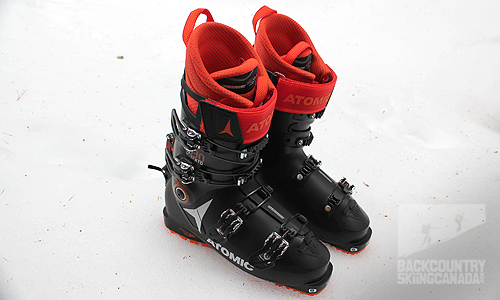 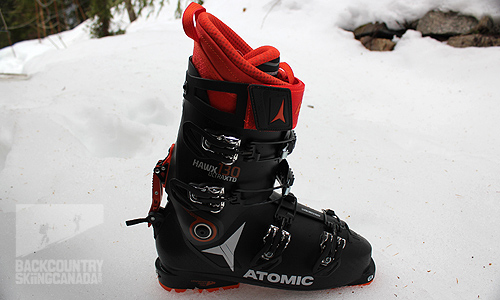 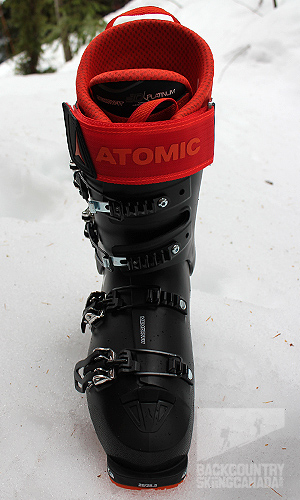 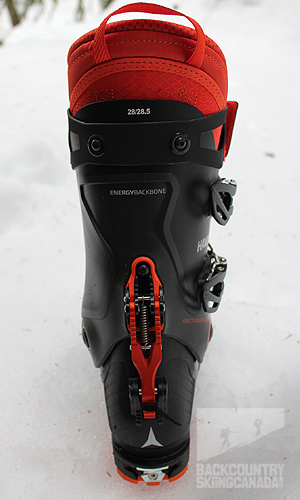 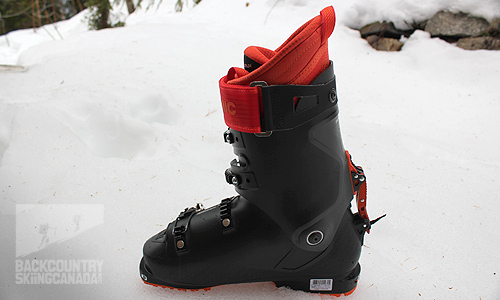 Atomic was able to keep the Hawx Ultra XTD 130’s weight sub three kilos by using grilamid for the shell and cuff. Grilamid is one of the lightest and strongest plastics used in ski boot construction today and plays a big part in the ability to achieve a 130 flex rating for such a light ski boot. With weight and flex well in the acceptable alpine touring range, the other important piece of the puzzle to perfect is cuff rotation. The Free/Lock 2.0 mechanism found on the Atomic Backland Carbon boots was integrated into the Hawx Ultra XTD 130’s since it is easy to use and incredibly light. It plays a big role in the Hawx Ultra XTD 130’s stiffness when in ski mode and unlocks an impressive 54° of cuff rotation when disengaged. Unlike with the Backland Carbon AT boots however, you will need to undo all the buckles and loosen the power strap in order to take advantage of the full range of motion while in walk mode. 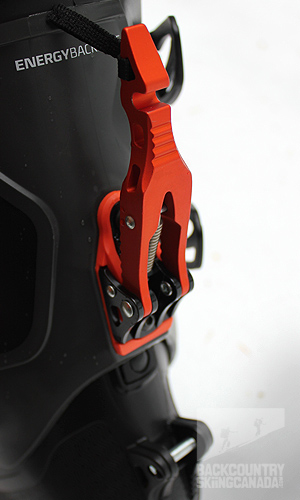 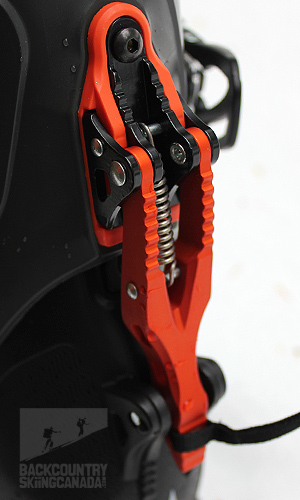 If the forward lean of the Hawx Ultra XTD 130 Boots is not to your liking there is an optional cuff spoiler that can be used to tweak things more to your liking. Simply replace the screws that affix the power strap with the longer ones found in the box and the rear spoiler can then be fastened to the grilamid cuff. In addition to the increased forward lean you’ll also notice added rearward support is provided.

The integrated WTR (walk to ride) rubber soles provide good traction and use a hard plastic Anti-Friction Device (AFD) in the heel and toe which provides a   TÜV-approved safe release while maximizing power transmission from the boot to the binding. This harder plastic also provides slower wear of the overall tread similar to the lugs found on the La Sportiva Spectre 2.0 Boots and the Dalbello Lupo AX 125 C Boots. The  Dynafit Certified low tech inserts are compatible with tech bindings such as the Marker Kingpin and G3 Ions and since the Hawx Ultra XTD 130 Boots have an ISO 9523 sole they also work with Marker Duke bindings and more. The Hawx Ultra XTD 130’s do not however, fit standard alpine bindings. 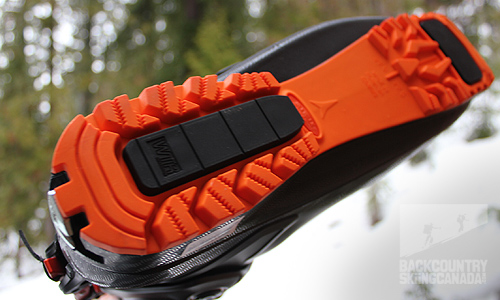 The Memory Fit 3D Platinum/Gold liners that are included with the Hawx Ultra XTD 130’s are able to be hand washed in 30°C/86°F water and air dried to remove any bacteria and stink that may build up over time. As well, should you wish to form fit the liners you can use a hot-air blower for 15 minutes or take them to your local ski shop and place them in a Memory Fit oven for 3-4 minutes. Your boot fitter will then be able to customize the liners and shell to your individual feet shape and anomalies. 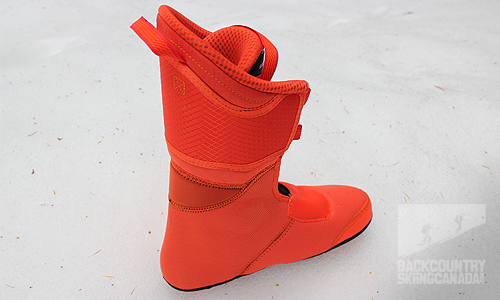 The buckles are fairly basic and do not exude quality, they also  don't have a buckle latch system to keep them out of the way while you put on and take off the boots. 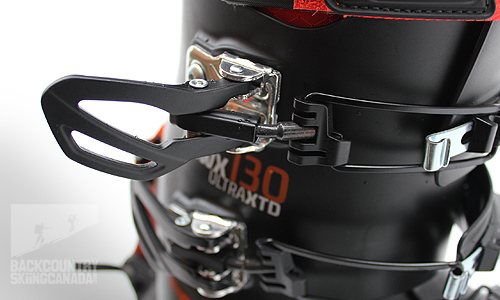 A built-in buckle catch for when you switch over to tour mode. 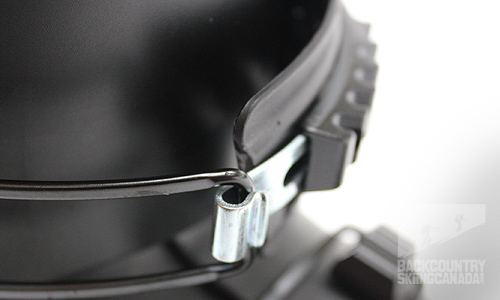 Like skis, the holy grail of ski boots is to be a ‘quiver of one’. A single boot that can tour and also knock out laps at the resort. This is the bullseye that Atomic was aiming for with their new Hawx Ultra XTD 130 Boots. While they’re not designed to be the lightest touring boot nor the beefiest downhill boot, but rather the best of both worlds. At just 2840g for the pair, the weight is truly impressive for an overlap construction boot and you’ll notice this every step you of the way on the up-track. I was further amazed at just how stiff the Hawx Ultra XTD 130’s were for this weight. Atomic reports a 130 flex rating and I’d say that this may be a little generous but overall feels close and is what gives these boots their performance on the way down. That and the Free/lock 2.0 mechanism from the Backland Carbon Boots. It’s a simple design that secures the cuff to the lower shell with out any give.

The Hawx Ultra XTD 130’s liner is not as substantial as those found in other alpine touring boots and closely resembles the liner found in the Atomic Backland boots. It’s light and minimal, so on colder days you’ll know it’s cold outside. That said it worked well on days I was out, however, you will need to replace the footbed as the one included is beyond minimal and offers up no support for those with high arches. I immediately tossed them and replaced them with my SIDAS winter 3Feet custom insoles—ahhhh!

As with most overlap construction boots, the Hawx Ultra XTD 130’s are difficult to get in/out of and you may have to fight with them on colder days or keep the shells super warm in the car on the drive to the trailhead. Given that they are a four buckle (plus power strap) boot the fit is satisfying, however, I did find that I needed my boot fitter to add inserts on the exterior of the liner to keep my heel seated properly.

I was quite impressed with how well the Hawx Ultra XTD 130’s toured. Their 54° of cuff rotation was adequate, although I was disappointed that all the buckles and power strap had to be released in order to take full advantage of this flex but that is the norm with most AT boots and overlap construction boots in particular.  While skiing the resort these boots felt very capable and were able to drive a fat ski such as my Volkl Vwerk Katanas which are 122 underfoot. The flex was very progressive considering that they are rated at a 130 but I did notice considerable lower shell deformation when you really leaned into them. The Atomic Hawx Ultra XTD 130’s closest competitor would have to be the Tecnica Zero G Guide Pro Boots  which we reviewed over here. While the Hawx Ultra XTD 130’s are a few hundred grams lighter and offer up 10° more cuff rotation I did find that the Zero G Guide Pro’s did have a much more comfortable and thick liner. They also skied with more authority in challenging conditions but did not come close when skinning uphill as the cuff rotation was inferior.

Overall, Atomic did an admirable job of combining the best of the Hawx boots with that of the Backland to create a competent crossover ski boot. A more substantial liner with a solid footbed and some buckles that stayed out of the way as you put on the boots would go a long way to making this a 2/2 for fit and functionality.

Get to know Atomic’s other AT boots in out ski boot review section here, specifically the Backland Carbon and Tracker 110’s.