Last season we reviewed the Fischer TransALP alpine touring (AT) boots which weighed in at a respectable 3440g / 7.6lb. This year Fischer upped its game considerably by unveiling their Travers and Travers Carbon AT boots which offer up considerable weight savings. We got our hands on a pair of the Travers Boots (incidentally the name is a combo of the words "Transalp" and "versatile" and is not based on the word "traverse”) and we found they were most definitely lighter at just 2160g/pair, compared to the 3440g for the TransALP boots. This diminutive weight puts the Travers boots in the same category as the Atomic Backland Carbon boots, Scarpa F1 boots, Arcteryx Procline boots, and Salomon’s soon to be released X-Alp boots. Make no mistake, the Fischer Travers Boots are as light as they get and could easily be used for skimo races. If the regular Fischer Travers Boots aren’t light enough for you, you can shell out an additional $100 for the carbon version which will shave a further 100g off the weight. 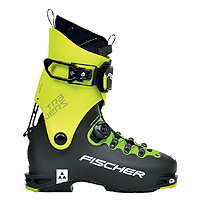 The Fischer Travers Boots have a unique BOA system over the forefoot as you can see in the image below. 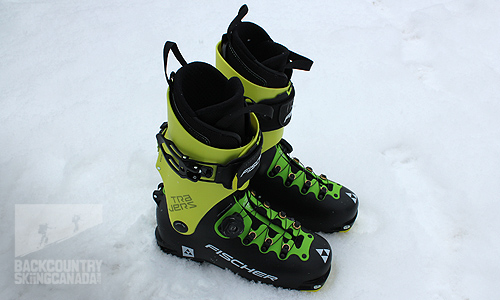 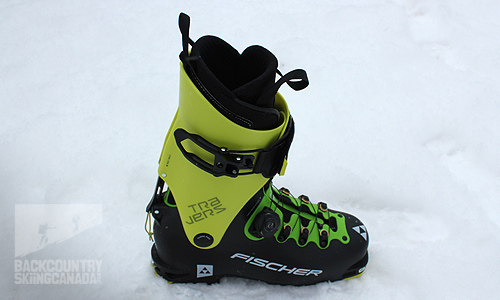 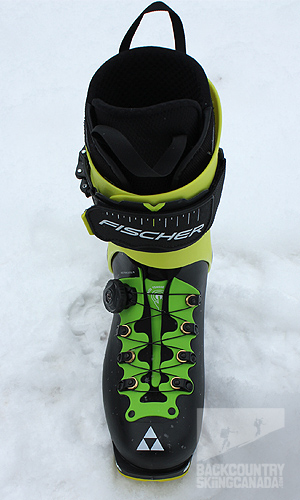 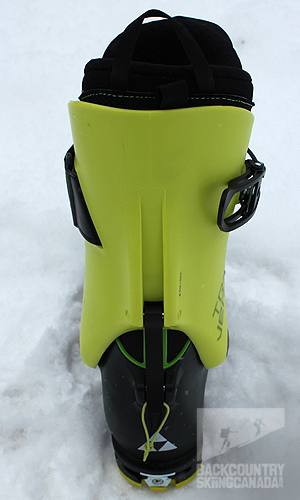 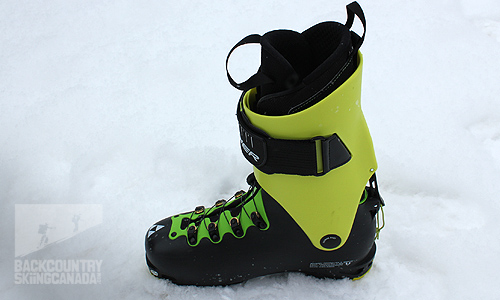 The lightweight nature of the Travers Boots is due to their thin Grilamid shell, their minimalist Thermoshape Lite liner, and the fact that they have no buckles. That’s right, Fischer did away with the standard ski boot buckle in favour of a Boa Closure System; Securing over the forefoot, with a single Velcro power strap on the cuff. The Boa Closure System is very similar to the system found on the new Scarpa F1 AT Boots, except that the Fischer system uses a series of brass wheels on both sides of the forefoot to ensure a complete enclosure and firm hold from your instep to your toes. This system allows for an uncomplicated, fast and precise adjustment which can easily be performed one-handed for quick boot entry and exit.

Since the cuff and lower portion of the boot don't overlap at the front of the boot or heel, the Travers offers an unprecedented 80° of cuff rotation, which is more than the human ankle. Breaking trail or skinning in the Travers is effortless and fluid thanks to this incredible range of motion. To keep snow and moisture out of the boot, Fischer integrated a waterproof gaiter that attaches to the lower shell and stretches almost to the top of the cuff.

While the thin Grilamid shell provides some support, the Travers is fairly soft with a very progressive flex. In order to stiffen the Travers torsionally, Fischer uses a Carbon/Aramid plate in the sole section, ensuring adequate power transmission to the ski and allowing it to drive fatter skis like the DPS 112’s (which we used to test the boot).

A lightweight ski boot for alpine touring or ski mountaineering 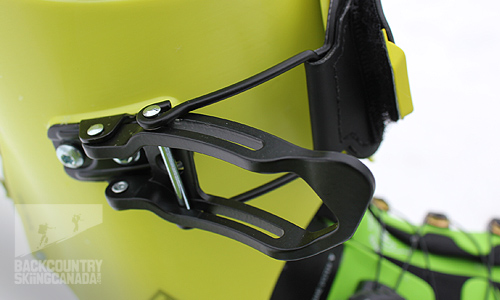 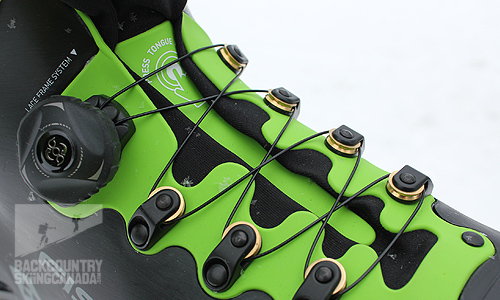 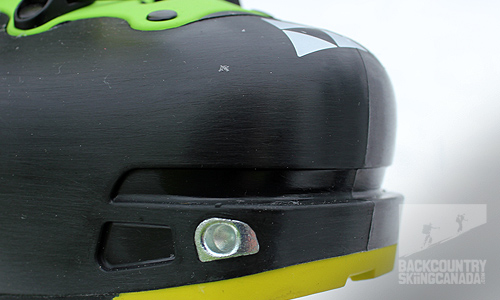 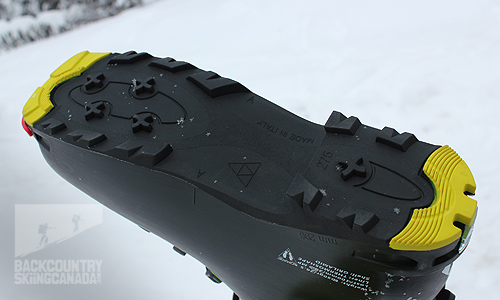 The left image shows the Fischer Travers Boot locked & loaded and ready to ski, on the right, the boot in walk mode. 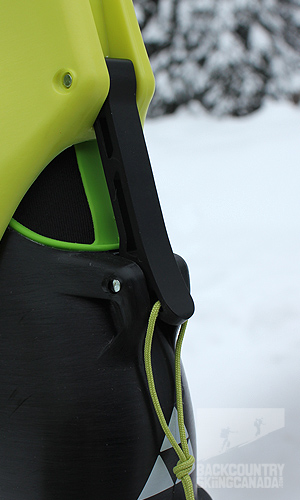 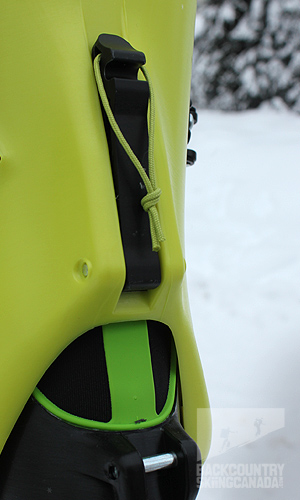 There’s no denying it, the Fischer Travers Boots are incredibly light. They’re in the same weight category as the Atomic Backland Carbon and Arc’teryx’s Procline boots, but are lighter than both by roughly 100g. If weight is your only concern, then the Travers is a clear winner. But most people also want a boot that can perform on the way down. Given their incredible light weight, my expectations for the Travers’ comfort and ski-abilty were not that high. However, as soon as I put one on, I knew I was in for a bit of a surprise. I was impressed by how well the Boa Closure System evenly cinched the shell around my forefoot. There were no pressure points like you often get with traditional buckles, but, you can’t tighten the BOA as much as you can traditional buckles; a bit of a trade off there. I have a size 10 foot so the 27’5’s fit me well, but I maxed out both the BOA System and power strap. The Power strap is sadly not adjustable, so I was not able to move the buckle to allow for a tighter fit. While heel hold is excellent right out of the box thanks to the BOA System, I did find that while skiing some heel lift was inevitable. The addition of a heel lock to the exterior of the liner by a qualified boot fitter, and my SIDAS custom insoles, helped reduce foot movement and took up some of the extra space inside the shell. Lateral foot mobility could be improved, however, and I attribute most of this deficiency to the minimal padding in the liner, and the fact that it tends to move around inside the shell (something that I felt on the skin track as well).

The walk/ski mode mechanism was impressively simple to use and provided a surprising amount of stiffness in ski mode. I did find that the flex was more than I’d traditionally like in an AT boot but again given the weight of the Travers, this is to be expected. The flex was very progressive, but when maxed out I did find that the bottom shell flexed in order to absorb some of this forward-leaning energy.

The Travers boots are fairly easy to put on and take off, but if you have a high arch like me, you will need to ensure all the BOA coil is at the top of the rollers to allow maximum space for getting into and out of the boot. It also helps to have the boot in walk mode. I found that the built-in waterproof gaiter got in the way since it uses Velcro to attach to the liner. But once I mastered the learning curve things became more efficient and it became less of an issue.

The location of the BOA System is high up on the outside of the boot to avoid contact with rocks when scrambling but remains in harms way compared to the Scarpa F1’s BOA placement. I also question the durability of the cable that’s used…time will tell.

Another thing to note is that the Travers is only compatible with tech bindings, but it does have enough of a heel welt that it works with the Marker Kingpin Bindings as well.

Bottom line, this is an AT boot for those obsessed with weight and who perhaps want to get into skimo racing without breaking the bank. This is not a boot for those that cherish the down more than the up.