The evolution of Alpine touring boots typically happens slowly over time, small changes are integrated to make them lighter and higher performing. Few if any go through the design revolution that the Tecnica Zero G’s have in their latest iteration. Make no mistake, this is a complete redesign of the Zero G Tour line up. The inaugural Zero G Guide Pro’s hit the market two years ago and in this time Tecnica has been quietly integrating a vast number of upgrades and improvements for the latest version which made its debut this fall as the Zero G Tour Pro. 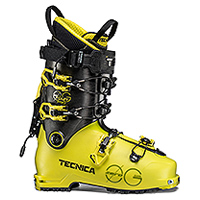 Light, stiff and lots of downhill perfomance in any terrain. 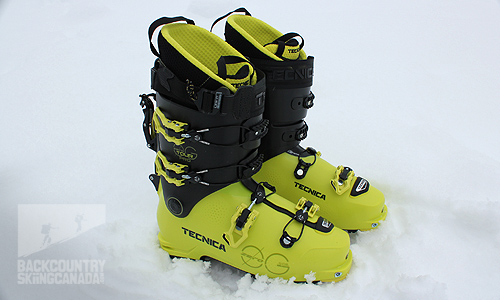 SHOW THE REST OF THE REVIEW / PHOTOS / VIDEOS
Have a watch of this video review of the Tecnica Zero G Tour Pro Boots we created, same boots different colour.

Lightweight ski touring gear typically compromises downhill performance in order to save on weight. Tecnica, however, has found a way to reduce the weight of their Zero G boots without eliminating features or performance. The genesis of the first generation Zero G Guide Pro boots was from their alpine line and thus the boots still felt like a downhill boot with a walk mode. The Zero G Tour Pro, however, is most definitely a dedicated ski touring boot and has been purpose-built from the ground up. 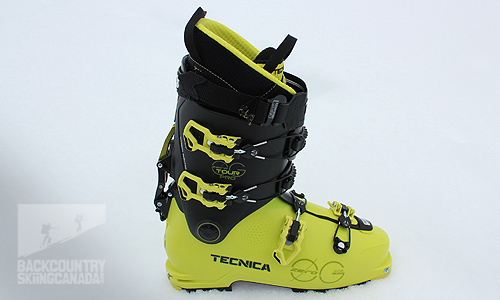 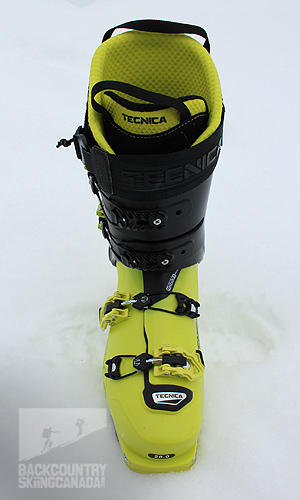 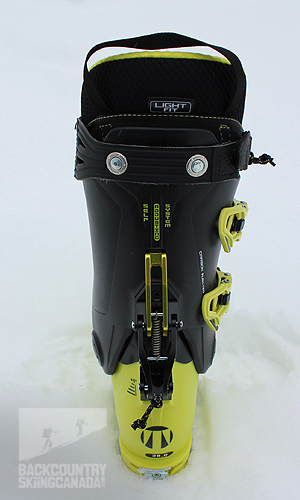 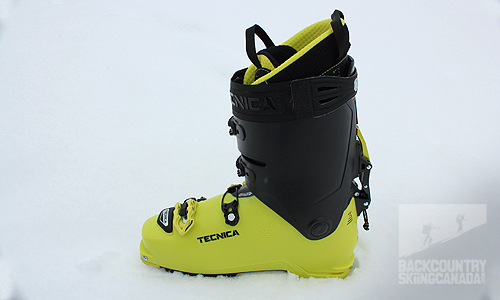 The Zero G Tour Pro Boots are Tecnica’s lightest and stiffest ski boot for backcountry skiing. Weighing under three pounds per boot, most of the weight savings has come from the use of Grilamid for the shell and the cuff, the latter being injected with carbon fibres. Tecnica chose to use Grilamid as it strikes the right balance between stiffness, durability, and lightweight. The dimpled shell is still customizable to your specific foot shape as is the Ultralight Fit liner. Backed with a waterproof, breathable membrane, the liners stay dry and comfy even when you're knee-deep in powder. 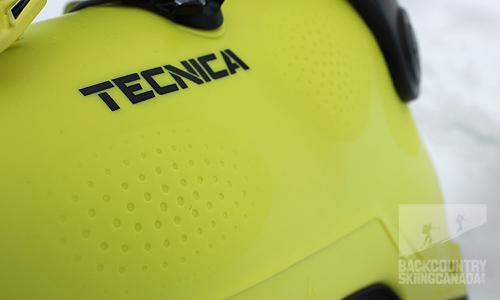 What’s more impressive is that Tecnica didn’t sacrifice the Zero G Tour Pro’s 130 flex rating in order to save on weight. Add to this the boot’s 55° of cuff rotation (up from 44° previously) and you’ve got a high performance ski down and a natural range of motion for the walk up. While the new full-length Vibram rockered soles and slimmer magnesium buckles are welcome upgrades the Light Lock Powerstrap is one feature that will make you smile. Its origins is from Tecnica’s Mach 1 boots, but this version is lighter with an aluminum hook at the end which facilitates quick and easy entry into the boot while the paracord loop provides a simple pull and release mechanism for quickly loosening the strap. 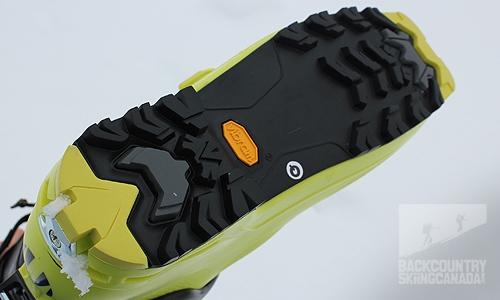 The previous Zero G ski walk mechanism was internal and while it worked the small switch on the spine of the boots didn’t exactly instil confidence and was challenging to use with gloves on. The new Double Locking Mobility Cuff System found on the Tour Pro’s is similar in appearance to the ski/walk mechanism you’d see on the Atomic Backland or Scarpa Maestrale Boots, but it’s not. Tecnica’s Double locking lever system engages at both the cuff (like most other AT boots) but also at the lower shell. This provides a more solid and safer connection that offers up increased performance, stability and more importantly stiffness. It also reduces the bulging of the lower shell during forward flex. Since the system is self-adjusting any kind of play that may creep in over time is automatically reduced. There is also a keeper hook that engages with the bottom bar to ensure it will never come undone when it is not supposed to, something that has plagued the Maestrale Boots. 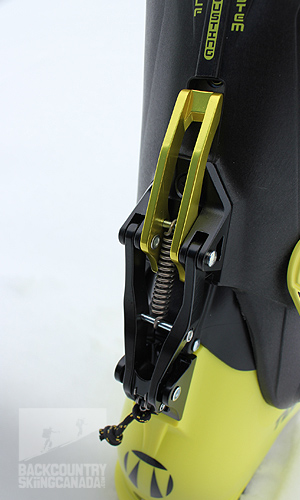 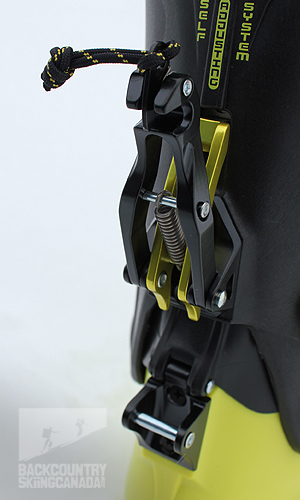 Below is a list of improvement found on the new Tecnica Zero G Tour Pro Boots when compared to the previous Guide Pro version:
Webbing lock power strap: lighter, more effective, simple on and off.
Ski /Walk mode lever: Easier to grasp with gloves on and is now external with a two-part anchoring configuration.
Soles: Vibram rubber with better traction and durability.
Shell: Lighter by 200g/boot with more internal volume but a less bulbous shape.
Cuff Rotation: Increased from 44° to 55°.
Buckles: Simple, lightweight wire design. 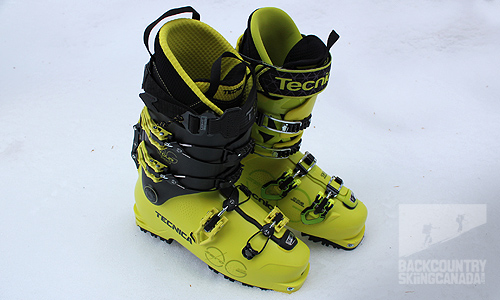 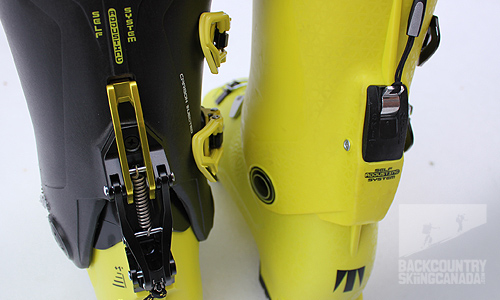 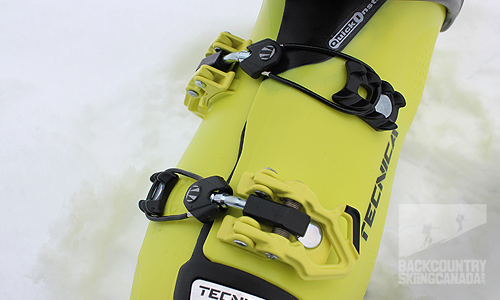 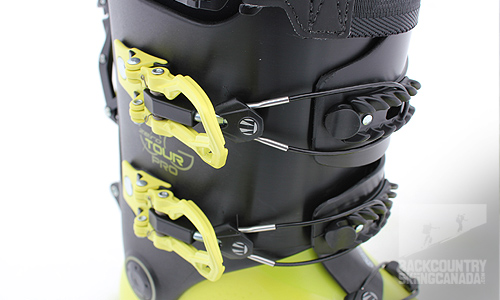 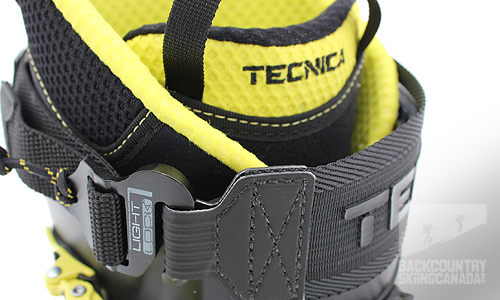 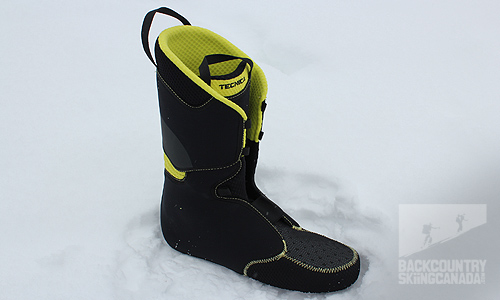 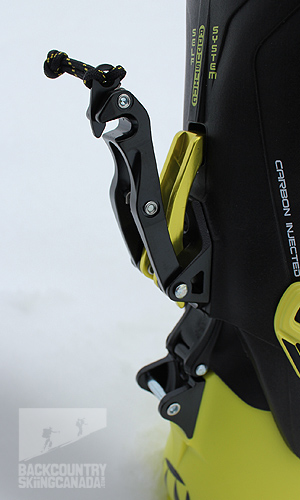 A 4-buckle AT boot with a carbon fibre-Grilamid cuff, 55° range of motion and flex rating of 130 weighing under 1,320 grams per boot… what’s not to love? For comparison, Tecnica’s Zero G Tour Pro Boots are most similar to the Atomic Hawx Ultra XTD 130 and Scarpa Maestrale RS. Like the Hawx, the Zero G uses an overlap construction which provides lateral rigidity reminiscent of alpine boots. Its forward flex is subtle and progressive just like an overlap cuff boot should be, yet it still provides a very respectable 55° range of motion in walk mode—the best of both worlds. On the downside, however, the boot’s design makes them noisy when flexed and in walk mode. A plastic on plastic squeak is obvious and while it won’t bother everyone, it sure does me.

In the back of the boots the Double Locking System is pure genius. Why engage the walk mechanism at just the cuff like most other AT boots, instead Tecnica goes one further and also latches it at the lower shell. A spring-loaded hook also automatically engages when latched so there’s no chance of it converting over to walk mode when you’re skiing. Each time you switch over to ski mode you have no idea that any of this additional technology is being engaged. It’s a seamless design and one that prevents icing up which I’ve encountered on other boots with external ski/walk mechanisms. The large and beefy design of the Double Locking System also makes it easy to engage/disengage which is a huge plus compared to the previous version.

The boot’s minimal buckle design saves on weight and is easy enough to use even with gloves on. I just wish the top two buckles used integrated catches to retain the buckle setting as I found that in walk mode they can come unlatched and I’d have to reset them when buckling back up at transitions.

The new rockered Vibram sole is far more effective for walking and climbing on rocks, something the previous Zero G boots was lacking and which attributed to their Frankenstein-like clunkiness.

When it comes to fit, the new Zero G Tour Pro Boots use the same 99mm last but the internal volume is substantially larger. There’s now room in the toe box for wiggling your pigglies and the volume over the arch is enhanced as well. I really appreciate this additional interior room and found the fit much more pleasing than the previous version since my foot is average to slightly wider. Most of this interior volume is gained by using a new thinner liner. In the past, Tecnica’s liners were made by Paulau and while they were very cush, they tended to take up too much room internally and also increase the bulbous look of the shell in order to accommodate them. Tecnica is now making the Ultralight-Light Fit liners found in the Zero G Tour Pro’s and they’ve incorporated breathability in the top toe section and a healthy hinge point on the back above the ankle where it’s needed. They are of course also fully heat-moldable.

The new and improved power strap is a welcome addition as it is no longer a giant piece of velcro, instead, the built-in ratchet allows for easy tightening. The strategically placed cord releases the powerstrap in an instant and is similar to that found on the new Dynafit Hoji Boots. Add to this the ‘U buckle’ which allows you to quickly unfasten the power strap completely for easy on and off, and you can tell that Tecnica was thinking about each and every little detail.

While evolutions are par for the course it takes a real revolution to truly change things for the better and Tecnica has done an outstanding job on the new Zero G Tour Pro Boots. They’ve morphed from a downhill boot that can ski tour to a ski touring boot that can downhill.