Innovation deserves recognition, especially when it speeds up your transition time and comes in such a lightweight and well fitting boot. The new Dynafit Hoji Pro Tour Boots have re-written the rules as to what an alpine touring boot should be. Oh, and it can ski the shit out of anything too!

There’s been a lot of hype about Dynafit’s new Hoji Pro Tour Boots, and for good reason. The genesis of this radical boot design began in 2013 and was a collaboration between pro freeride skier Eric “Hoji” Hjorleifson and Low Tech Bindign inventor Fritz Barthel. The two geniuses joined forces to create a new concept in ski touring boots and after four years of research & development along with extensive testing, the Hoji Pro Tour is finally here. 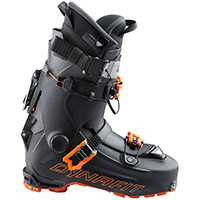 Get all the innovative details of the Dynafit Hoji Pro Tour AT Boots here in this overview video: 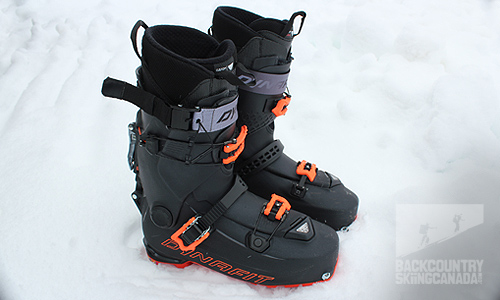 What makes the Hoji Pro Tour so unique is that you can switch from tour to ski mode by flipping a single lever. This may not sound overly revolutionary since most touring boots already unitize this ski/walk lever design. What makes the Hoji Pro Tour’s different is that when you switch from ski to walk mode this lever (located on the spine of the boot) simultaneously releasing the boot’s cuff, the top power strap and upper buckle. It’s one simple motion to release all three so you are truly in walk mode without having to unbuckle or adjust anything else, just flip the lever and you’re ready to walk. This ski/walk mechanism uses a series of cams/cables linked up to the top buckle and the Ultra-Lock Strap at the cuff of the boot. Release the Hoji-Lock System and the buckle and power strap open up, engage the lock system and the boot is ready to shred. 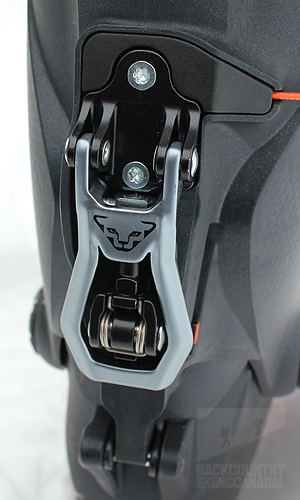 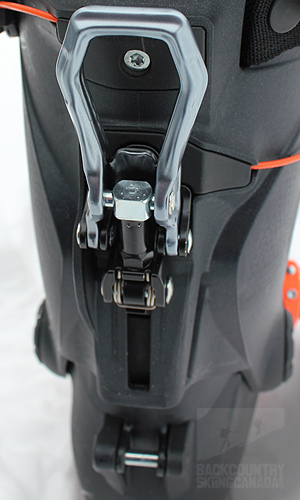 Eric Hjorleifson took the revered Dynafit Vulcan Boots and Frankensteined them into early prototypes of what would eventually become the Hoji Pro Tour Boots. You can see that prototype in this video we shot of Hoji last winter. This new design did away with a pin to lock the cuff and instead uses an innovative sliding tongue-in-groove spine to support the shell directly. This results in a super stiff ski boot with a very progressive flex. Switch the patented Hoji-Lock System from ski to walk and the sliding spine is pulled up and out of the way providing a cuff rotation of 55°. Downhill performance of the Hoji Pro Tour is like that of a traditional alpine boot since there is a direct connection between upper and shell with zero shell flex as found in other AT boots.

While the Hoji-Lock System is the star of the show, it’s by no means the only feature that’s worthy of attention. While the Speed Nose (or lack of a toe welt) is not a new feature in ski boot design it’s one that saves weight on the Hoji Pro Tour (albeit minimal) and improves the natural/fluid walking motion thanks to the setback pivot point of the tech inserts. If you haven’t toured in ski boots without a toe lug you’ll immediately notice the ease and natural stride that it provides. 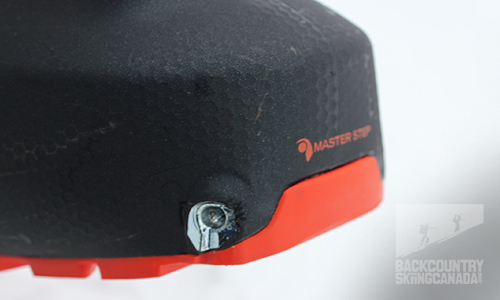 The Hoji Pro Tour has three micro-adjustable buckles with one located ideally over the instep to snuggly position your heel in the back of the boot. With a last width of 103.5mm these boots fit average to wide feet with minimal modification and boot fitting. With a cuff rotation of 55 degrees these boots were made for walking and the 11-degree forward lean angle provides an aggressive stance for hard-charging skiing. 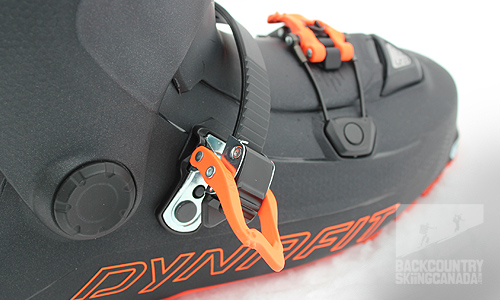 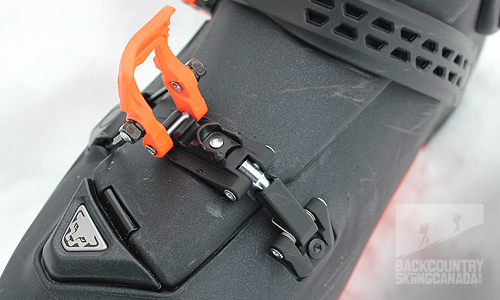 The Hoji Pro Tour also comes in a Hoji PX version for both women and men and is made with Pebax instead of Grilamid for those not as concerned about weight and who want to save a little cash. If you’re interested in hearing about the Dynafit Hoji Pro Tour Boots from the man himself then check out this video we shot prior to the boot’s release: 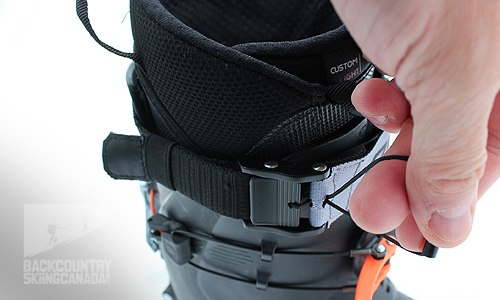 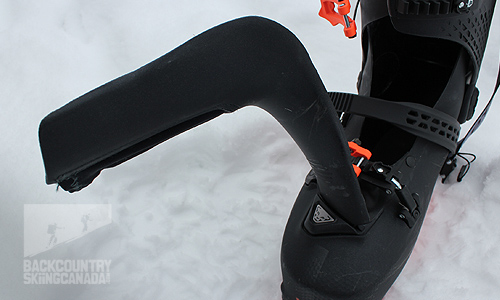 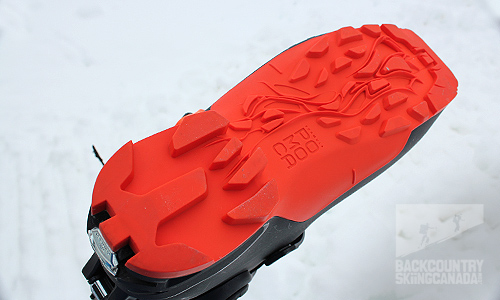 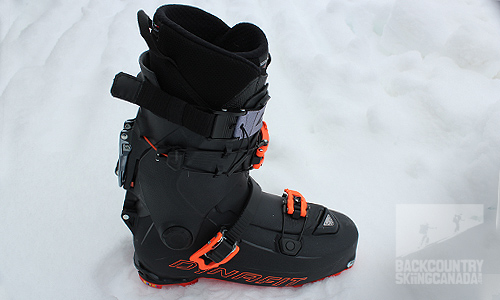 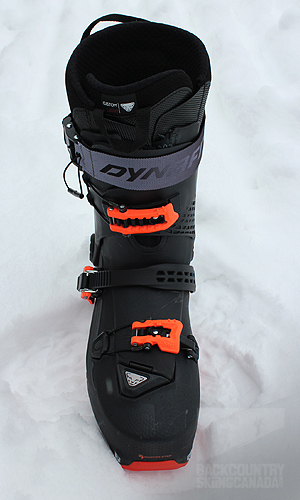 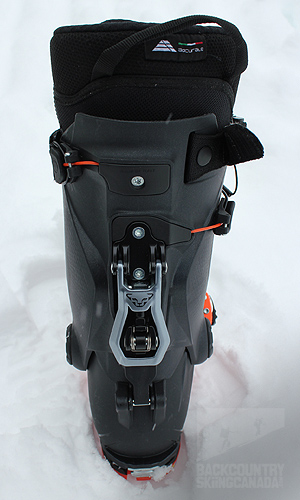 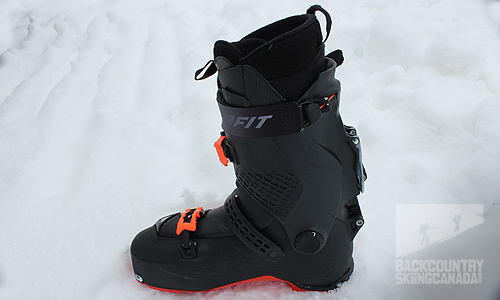 “A ski touring boot geared more for the climb or for the descent? As of Winter 2018-19, this basic ski touring question will finally be a thing of the past because the Hoji touring boot has turned the question of ‘either-or’ into simply ‘and.”

After a solid amount of testing, I’d have to concur with Dynafit's statement above. Not only is the Hoji Pro Tour a lightweight ski touring boot that climbs with ease it can also shred aggressively on the down. Thanks to the sub 3kg weight, Speed Nose design, 55° cuff rotation and of course the infamous Hoji-Lock System, this boot was truly made for long days and big vert. The 120 flex rating (which felt true to me) and the progressive flex gives it a solid feel that instils confidence on the way down. Although not designed as a purpose-built freeride boot the Hoji Pro Tour is a successful evolution of the Vulcan boot and where it’s origins came from. It was more than comfortable charging hard and driving a fat ski in whatever kind of conditions you threw at it. It felt very smooth and had zero play when flexed it was very progressive and smooth. The flex pattern started easy and ramped up without an abrupt end, it slowly got firmer without abruptly hitting the wall when maxed out. This makes for an energetic and lively decent whether charging hard, hitting bumps or pillows, or simply carving groomers. Compared to stiffer boots I’ve skied the Hoji Pro Tour hits the sweet spot between weight, stiffness and fun.

I have a pretty “normal foot shape” not wide and not narrow with a healthy arch underfoot and for this reason, the Hoji Pro Tour fit me remarkably well out of the box. While most complain about the spaciousness in the toe box, I feel it is just right. But then again I prefer to have wiggle room for my toes to keep them comfy and warm on colder days. It’s true that the heel pocket is tighter than most other AT boots, but again, I prefer this as it seats my ankle well and minimizes any lift of my foot. The only modification I had to do was, of course, cook the liners and then I placed a padded achilles lock on the exterior of each liner to further keep my heel seated in the back of the boot. I can now easily spend long days climbing and skiing in the Hoji’s w/o complaint.

While the 55° of cuff rotation is not going to break any records, what I really liked about it is that there is plenty of forward flex and it’s not all to the back. I’ve found previous Dynafit boots to have almost no forward flex with most of it to the back and on steeper inclines, this was an issue as you lean into the climb, not so with the Hoji Pro Tour's.

I’m a big fan of the Speed Nose design as it further enhances the walkability of these boots. Without a toe lug, the pivot point of the tech toes is located closer to your foot for a more natural walking position, this also makes the boots far more successful at stepping into tech bindings.

The cam lock on the Ultra-Lock Strap is a welcome feature as it’s much easier to release when compared to velcro and should be more durable over the long term. The integrated quick release is a simple design that makes it easy to release the powerstrap with a single pull, I only wish the powerstrap itself was longer to facilitate getting into the boots.

When compared to other AT boots the Hoji Pro Tour falls in the middle of the pack for weight, while it is lighter than the Salomon MTN Explore, Atomic Hawk Ultra XTD 120 and 130, it’s only slightly heavier than the Scarpa Maestrale RS and Tecnica Zero G Tour Pro. Something to keep in mind, however, is that because of the Hoji Pro Tour’s lack a toe welt and its thinner than normal heel welt it is not officially compatible with the Dynafit Beast, Salomon Shift, Marker Kingpin, Fritschi Tecton and all alpine bindings and AT frame bindings such as the Salomon Guardians. If you are a dedicated backcountry skier then don’t let this dissuade you, in my opinion, the Hoji Pro Tour is one of the top AT boots on the market and one that is changing the rules of the game.