Atomic made a big, bold entry into the lightweight AT boot market last winter at the Outdoor Retailer show with the debut of their new Backland Boot line up. This year, the prototypes have become a reality, and we’ve had a pair of the Backland Carbon Boots on the skin track for over a month now testing their limits. Although the Backland Carbon is designed as a light weight dedicated alpine touring boot, I also tested them in bounds on several groomer and powder days driving my Volkl V-Werks Katana skis (112mm under foot). I was very impressed with their performance, even though this was not the intended purpose they were designed for. Before we get into all of the testing results, lets jump in and talk about the design and features of this new über light AT (alpine touring) boot. 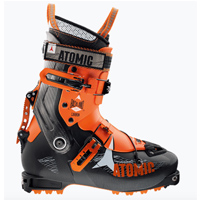 The Backland AT boots come in the regular Grilamid version for both men and women. The Backland Carbon boots are lighter and stiffer thanks to a carbon spine in addition to the Grilamid shell. Then there are the Backland Carbon Light boots, which as the name suggests, have the same great carbon spine but are even lighter than the other two models. All versions of the Backland boots have the memory fit shell which is heat mouldable, as is the lightweight thermo-mouldable liner, which uses Ultralon foam.

All of the Backlands are a two-buckle with a removable tongue for increased flex on the up track, and a lugged rocker sole for scrambling rocky summits (or just walking down stairs at the ski lodge).

The beefy external Free/Lock 2.0 mechanism on the heel quickly switches from ski to walk mode, and provides a full 74-degrees of motion for effortless skinning. The frictionless pivot which joins the upper shell to the lower uses a polymer bushings to provide smooth movement through the full range of flex. This, in addition to the 1,100-gram weight of each boot, makes them feel more like running shoes than AT boots.

It's one fine looking boot. 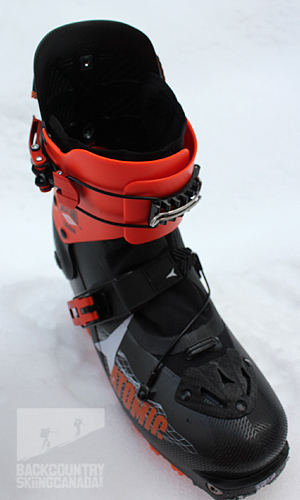 To keep your foot secure and ensure a solid ski experience, the Backland boots use two aluminum buckles and a 30mm power strap. The lower buckle is a cross lace system that uses a metal cable to wrap the lower foot securely. Each buckle has a built in catch latch system to ensure that your buckles don’t flail around aimlessly when open. You can easily open each buckle for walk mode then clamp them back down for skiing while maintaining your desired setting on each buckle.

Even though the Atomic Backland Carbon Boots offer up 74° of flex in walk mode, they are surprisingly stiff in ski mode with a progressive flex that enables you to drive a fat ski such as the Volkl V-Werks Katanaskis on groomers. It also has no problem railing big GS turns. The lower cuff height does take some getting used to while skiing, but the weight savings are much appreciated on the up track and the skiing performance doesn’t seem to be compromised. 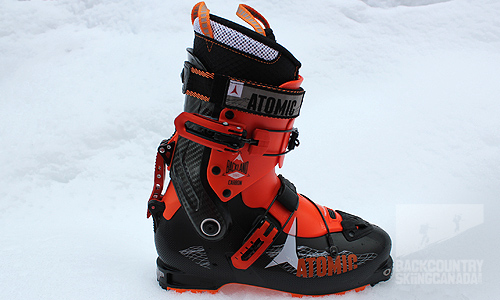 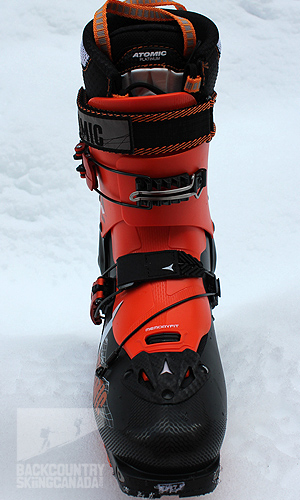 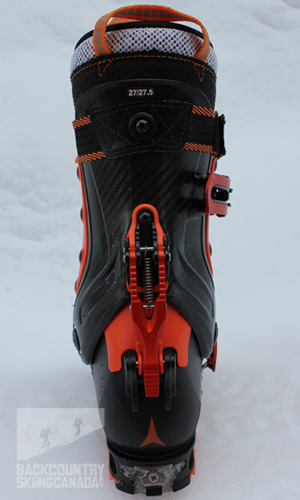 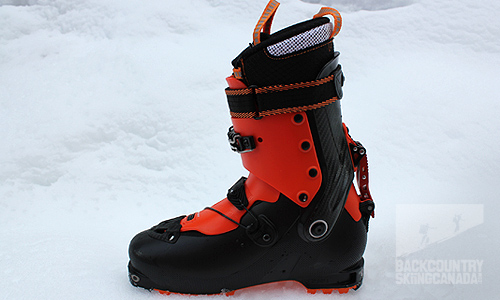 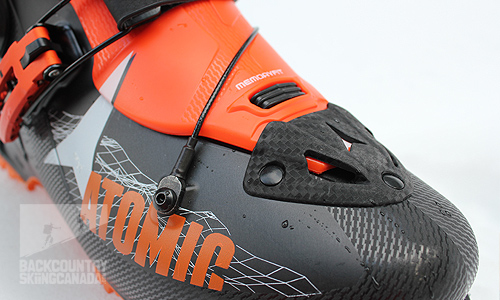 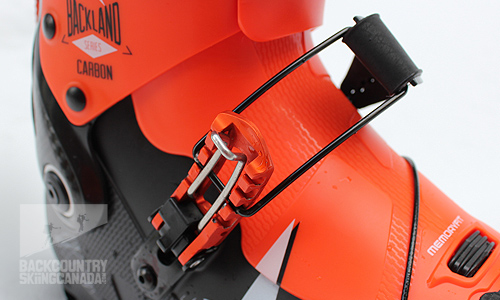 - Free/Lock 2.0 mechanism frees the cuff from the shell with adjustable forward lean. 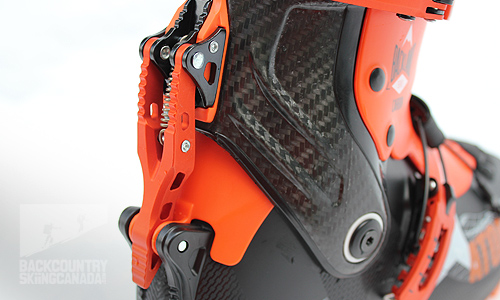 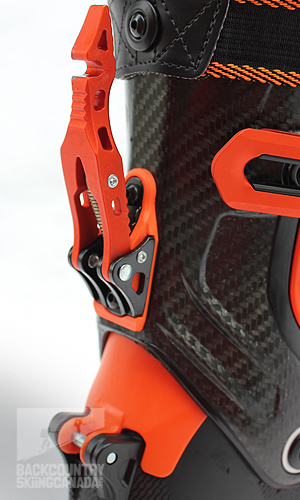 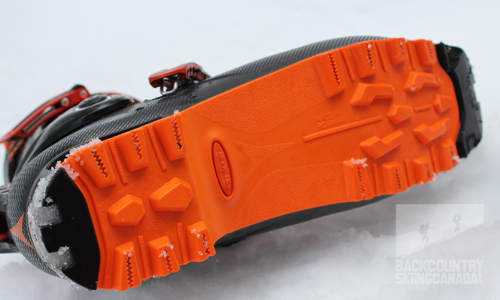 - Breathable platinum liner is made of lightweight Ultralon foam that is thermo-mouldable and hand washable. Perforations allow them to dry overnight. There are supportive zones in calf, ankle and tongue. 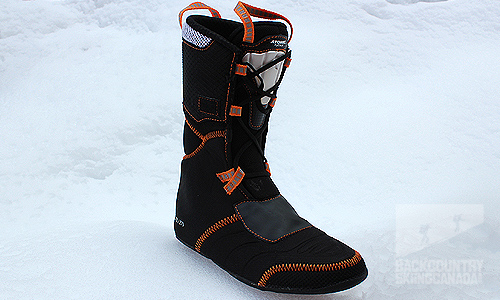 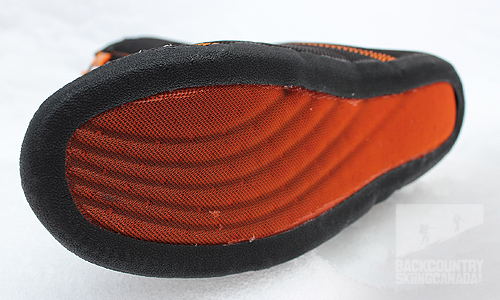 I applaud Atomic for producing such a well though-out and successful foray into the light weight AT boot category. Not only are they a great looking pair of boots, they also do what they were designed to do. Providing an incredible 74° range of motion (cuff rotation) in a silly, light weight, two buckle boot. If you are looking for a comparison, the Atomic Backland Carbon Boots are similar to the Dynafit TLT 6’s (which weigh 2100g), the new Scarpa F1 AT boots at 2200g, and also the new for 2016/17 season Arc’teryx Procline boots, which tip the scales at a reported 2380g. As you can see, Atomic is in good company, and hits the mark for a light weight touring boot at 2320 grams for the size 27 pair.

The new Arc’teryx Procline boots aren’t the only AT boots with a 3-point cross lace system on the forefoot, as Atomic also uses this system in the Backland and it works incredibly well. This buckle and cable system are pure genius and in effect work like two buckles across your forefoot. At first glance you may be skeptical about how well this buckle system will work, but trust me, it works as good if not better than traditional buckles. With only two buckles, the Backland Carbon boots maintain their light weight status while still holding your foot firm and stable.

The Free/Lock 2.0 mechanism that converts the Backland AT boots from ski to walk mode is a very rudimentarily designed when contrasted with all of the mechanics on the exterior of the boot. That being said, it works flawlessly, and is so simple that there is not much room for error since it’s not buried inside the shell. The only improvement that I think the mechanism might benefit from would be to enlarge the area you grasp to pull the lever up. (Currently it’s very small and can be difficult to use with large gloves on).

The overall fit of the Atomic Backland Carbon Boots was pretty spot on right out of the box for this reviewer. I have wide feet with high arches, but other than that, a pretty normal foot. I did, however, replace the stock foot beds with my custom moulded Sidas insoles to provide a better fit and take up any additional space within the boot. The memory fit shells and thermo-mouldable liners further fine tuned the fit and are a must-do for every skier prior to heading out into the backcountry. On the shell side, the Carbon Spine of the Backland Carbon boots provide increased stability and rigidity that a boot of this weight really benefits from. Lateral support is 100% solid and any unwanted shell flex is minimal thanks to this addition of carbon… plus it looks pretty cool.

In order to maximize cuff rotation for skinning, Atomic has incorporated a “quick click tongue” which is removable—should you choose. Several other AT boots offer this solution to improve range of motion. However, most of those boots admittedly don’t have even half the range of motion that the Atomic Backland Boots have (even without the buckles and power strap undone). Because of this the Atomic Backland boots are incredibly easy to walk in, with just a flick of the Free/Lock 2.0 mechanism. I’ve found that rarely (if ever) have I had to undo the power strap and top buckle while climbing. That being said, I have always opened up the lower forefoot buckle in order to keep my feet warm by facilitating blood flow to my toes. The built in catches on both buckles are super simple to use and effectively keeps the buckles set to where you want them. Simply open and close the buckles at will, with no need to worry about them flapping around. Because of these features I’ve never found the need to go through the hassle of removing the tongue, which involves totally unbuckling (power strap included). This is simply too much time and fuss for very little benefit in my opinion. Maintaining a little snugness by not totally opening everything up also limits the formation of blisters.

As for the inside of the Backlands, I did find the liners to be very minimal and thus a bit colder than most. Liners are a great area to save weight, and the Backland liners have shaved every extra gram in this area. While ski touring the cold was not as much of a problem, but standing around for long periods of time or skiing at the resort my feet got very cold. While there are reinforced areas on the shin and forefoot of the liners I still found that shin bang was inevitable, so in future versions I’d like to see some extra love provided to the liners to increase warmth and decrease shin-bang.

The other place that weight savings is achieved on the Backlands is with a shorter than average cuff height. To illustrate this, the La Sprotiva Spectre boots I normally run are easily 1-1.5” higher in the cuff, which means more support, comfort and control while skiing, but also additional weight. I think this is a small price to pay for a better ski experience, but I see the logic behind Atomic’s desire to keep things über light. Just something to understand before you commit to the Backlands.

The last point to mention is that the Atomic Backland Carbon boots have a much shorter sole length. I’m testing a size 28 boot which are typically a 314mm sole length, as in other AT boots like the La Sportiva Spectres or the Dynafit Ones. The Backland Carbons come in at just 298mm, so some binding adjustments were required in order to ski these boots on my current AT set up.

Overall, I’d have to say that the Atomic Backland Carbon boots are worth checking out if you are in the market for a super light, super flexible, dedicated ski touring boot. While there are a few tweaks that could be made in version two, this is a solid offering from Atomic, and one that deserves applause.