This year Tecnica introduced their Zero G Guide Pro Boots. They weigh just shy of 1500g, have a 130 flex rating and a 40° cuff rotation. I’d categorize the Zero G Guide Pros as an alpine touring boot. Ideal for side country laps, backcountry days, and resort skiing, a dedicated ski touring boot requires more range of motion and should be on the lighter side. The Zero G Guide Pro Boots would be in the same category as the Dynafit Vulcan and Salomon MTN Explore, but aren’t in the same league as the La Sportiva Spectres, Atomic Backland Carbons, or Scarpa F1s. These boots are exclusively for backcountry skiing, ideal for multi-day trips, and great for those looking for performance on the up more than the down. The Tecnica Zero G Guide Pro Boots perform best on the down. With four micro aluminum buckles and a shell mould that’s based on the new Cochise boots, the Zero G’s have the makings of a hard charging downhill boot. Tecnica saved weight in the cuff by incorporating cut-out windows, and are based on the same shell mould as the new Cochise boots. The use of Grilamid plastic saves significant weight in the Zero G Guide Pro’s. These are incredibly light boots considering the performance they provide. The support and control you experience on the down matches the performance of any 4-buckle alpine ski boot, and the boot also performs surprisingly well on the up. The Zero G Guide Pro’s have a pretty decent walk mode, and at 1524 grams you’ll feel like you’re wearing touring specific boots. 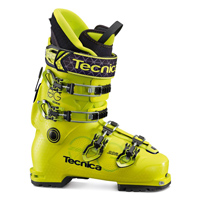 SHOW THE REST OF THE REVIEW / PHOTOS / VIDEOS
Lets start off with a 360° view of the Tecnica Zero G Guide Pro Boots. 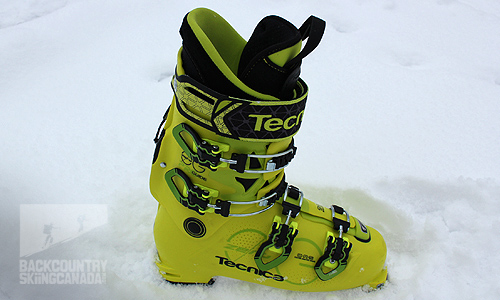 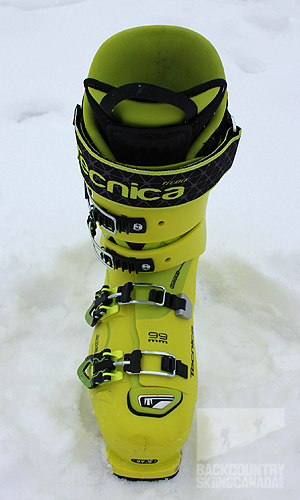 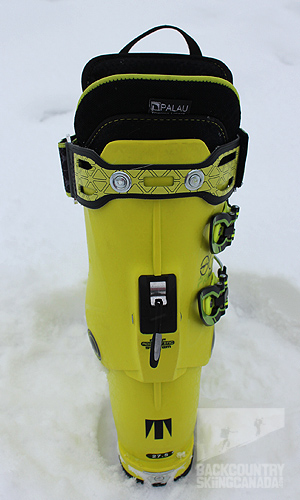 Tecnica’s Zero G Guide Pro Boots use an anatomically shaped shell they call C.A.S. After much research, I still have no idea what the acronym stands for. What I do know is that they have great out-of-the box fit, and if you need any shell modifications that’s what the dimples on the shell’s exteriors are for. The dimples are located both on the outside of the shell’s forefoot and at two locations on the inner side of the shell. These are traditional problem areas for some people, and the dimples allow for an added level of customization. Because there is less surface tension on the plastic in these three locations, a boot fitter can easily punch the shell providing more room for problem feet. Once punched the shell will retain its new shape with out deforming. An optional lacing system offers additional snugness, making the Tecnica Zero G Guide Pros feel more like a touring boot. The laces weigh 218 grams, so if you’re serious about weight then you may want to opt out of this option.

A Zero G Guide is available without the “pro”; These have a 110 flex, and weigh in a little heavier at 1700g, but with a reduced price of just $660. A women specific version is also available; The Zero G Guide W. 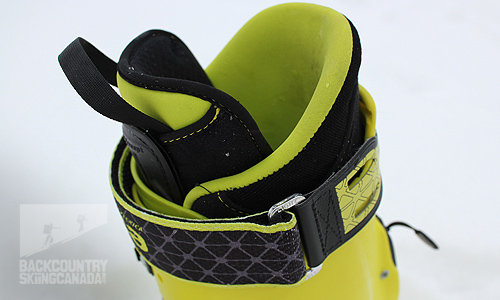 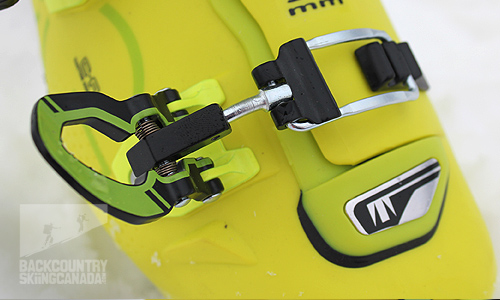 Having skied in the Dynafit Ones for the past three years mainly at the resort with the occasional ski tours, I was looking for a pair of boots that could replace these worn-out soldiers. I wanted something that skied like a downhill boot but could climb a skin track and walk around the ski lodge like a touring boot. This translates into a stiff, supportive boot that’s light with an adequate walk mode. This is precisely how I’d describe the Tecnica Zero G Guide Pro Boots.

The lateral support in the Zero G Guide Pro Boots is very good, and the flex while not being overly progressive does feel like a 120. However, Tecnica rates it at 130 (this is a totally subjective metric). No question though, this is a nice stiff boot that feels more like an alpine boot than a touring boot in the flex department.

As far as fit goes, I only made a slight modification to the liners and none to the shells. The liners are plenty warm for resort skiing and almost too warm for ski touring, unless of course you live in the Rockies where it’s always cold. Having skied these boots on cold (-15°C) and warmer days (-3°C) it feels like Tecnica didn’t skimp on the liners to try and save weight (as many other boot manufacturers do). After a quick heat mould the liners fit like a glove. However, I did find the toe box very small, so if you like more room up front be sure to request that when you get them moulded. The heel pocket on the other hand was very generous, and I found that while ski touring I had to keep the forefoot buckles tightened to avoid too much play and ultimately hot spots.

The cuff rotation on the skin track was adequate. But until you undo all the buckles and power strap to allow the full range to kick in, I found most of the range of motion was to the rear. Being used to the La Sportiva Spectre boots for touring, I typically don’t undo any buckles and am still rewarded with a huge walking flex; Not so with the Zero G Guide Pro Boots. But that’s to be expected in a much stiffer and performance oriented boot. While we’re on the subject of buckles, I have to mention the really cool feature that keeps the buckles out of the way while you’re getting in and out of the boots. Tiny stoppers are located behind each buckle so when you pull them back and out of the way they stay in that position until you are ready to buckle things up. This prevents the buckles from inadvertently catching on the ladders. Tecnica calls this their “Lift Lock Mechanism” and it’s found on each of the four Micro Aluminum Buckles. I call it pure genius. On the top two buckles, you’ll also find an Extended Cuff Hook that allows you to open these two buckles for maximum flex in walk mode without the buckles flapping around aimlessly, the hooks keeping them buckled but open. The only downside of the buckles is that I know I’ll find them cumbersome when ski mountaineering as they will undoubtedly catch on rocks and open when they shouldn’t. The two fore buckles are located quite far over the arch of the boot, and when post holing in deep snow I’m almost positive they will get hung up on things. I haven’t had any issue to date, but I also haven’t yet tested them while scrambling peaks or boot packing for longer periods of time.

One thing I’d also like to mention about the wear of the Tecnica Zero G Guide Pro Boots is that the shell does wear at the overlap location. As you can see below in the following image, the wear is easily evident. Bottom line, if you want a boot that’ll shred the resort and enable you to go beyond the ropes for laps on the skin track, then that is your boot. The Zero G Guide Pro is a good touring boot, and a great ski boot.