While Nordica is not known for being a backcountry brand (they typically leave this up to their sister company Blizzard) they are, however, venturing into the alpine touring (AT) boot market with their newly released Strider Pro 130 Dyn Boots. The Strider Pro takes essentially the same lower as the Nordica Speedmachine boots and combines it with Grilamid upper cuff in order to reduce weight and increase stiffness. Add to this a hike/ride mechanism and Dynafit certified inserts and the result is an All-Mountain AT boot that can lap the resort in the morning and go backcountry skiing in the afternoon. 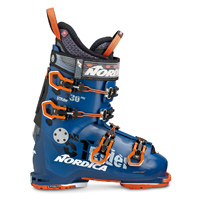 An overview of the Nordica Strider Pro 130 Dyn Boots. 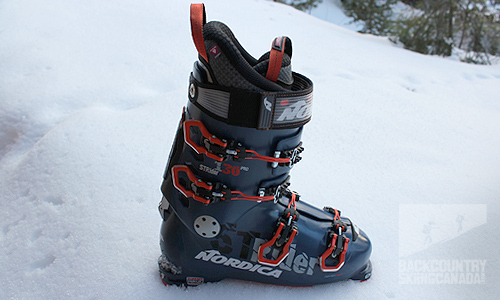 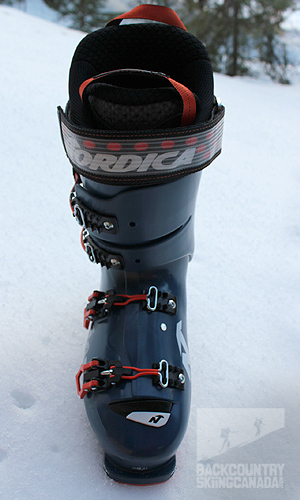 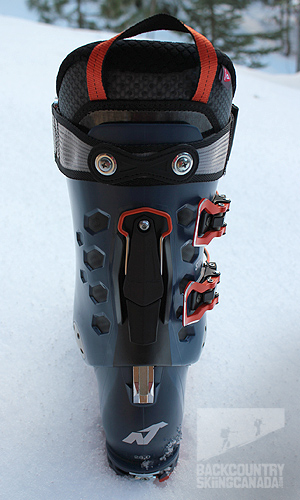 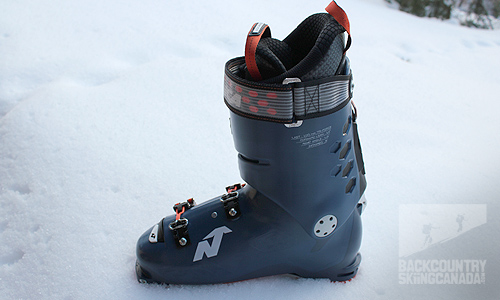 The Strider Pro 130 Dyn Boots are currently the only touring boot in Nordica’s line up and yet they have some admirable alpine touring features. Given that they use an overlap construction, the Strider Pro’s will feel and perform like an alpine boot but their 46° degrees of cuff rotation in walk mode (23° forward and 23° back) is fairly impressive, especially since they sport a true 130 flex. Along with this, the Tri-Force design and polyurethane lower shell (which can be molded with Nordica's Infrared molding system) provides an impressive power-to-weight ratio that rivals most downhill boots. 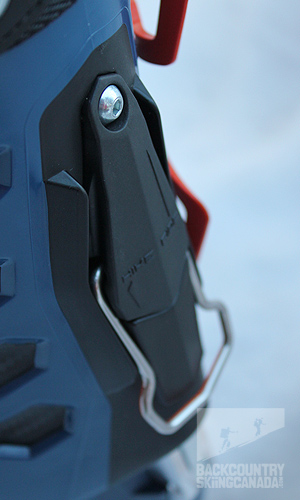 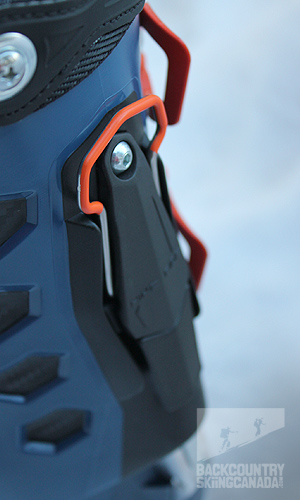 The Strider boot soles feature a Michelin tread (yup the tire company) for optimum performance and traction. To ensure durability, the Grip Walk toe and heel pieces are replaceable. These can also be swapped out with a DIN-compatible toe and heal that works with all alpine bindings. Since the default sole has rocker on the toe it has to be used with Grip Walk bindings, for alpine bindings the DIN-compatible toe and heel pieces would need to be swapped in. These will limit the fluidity and easy of your gate while walking in the resort’s lodge, but also enable the Strider Pro 130’a to ski on many more alpine style bindings. Since Dynafit certified inserts are embedded into the Strider Pro’s shell, they can be used with all tech bindings such as those from Dynafit, Marker, Salomon and G3. 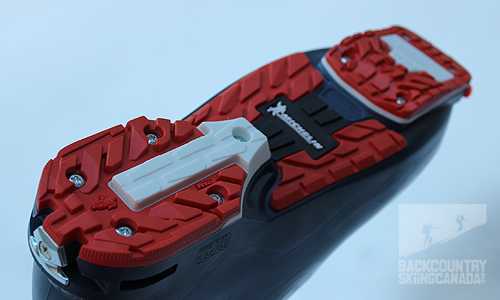 On the inside of the boots, you’ll find Cork Fit Primaloft insulated liners which keep your feet warm and comfortable. With a stiff upper for support and more flexible cork lower, these liners feel as beefy (if not more so) than high-end Intuition liners. These Cork Fit liners also sport touring features such as optional laces and a touring flex zone in the heel to facilitate walking. 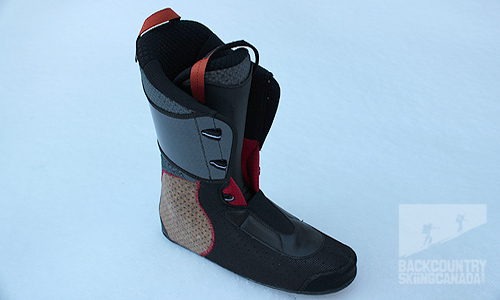 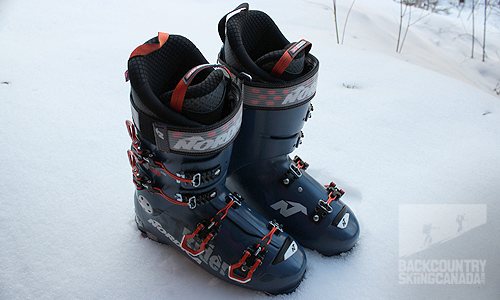 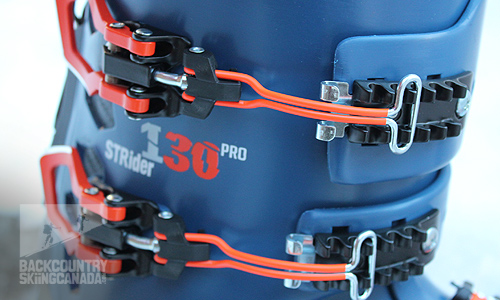 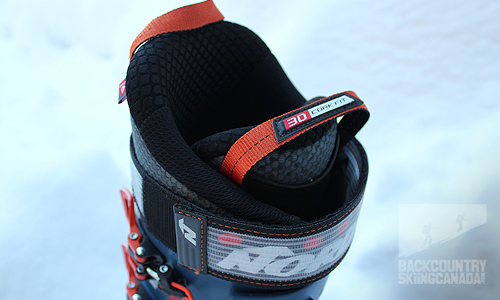 The first thing that I noticed with the Nordica Strider Pro 130 Dyn Boots was how well they fit my feet straight out of the box. While everyone’s foot is unique, I’d like to think that mine are pretty average, not too wide and not narrow, average arch, but not too much. At a size ten shoe, the 28.0 Strider Pro’s were supportive and well-cushioned thanks to their Cork Fit liners. The Primaloft built into the liners were plenty warm, but I do have concerns about the durability of the cork as it gets fairly abused when you insert and remove the liners for drying. I did replace the stock footbeds with my custom Sidas Insoles to help support my arches but other than that I skied them without needing to mold the shell and only had minor boot fitting done to make them truly feel like slippers.

Aside from comfort, I found the downhill performance to be that of a pure downhill boot which only makes sense given their overlap construction and 130 flex rating—which by the way felt pretty accurate but not as progressive as some other boots tested. With four buckles, the foot hold was impressive and my heel was seated well in the back of the boot while there was still plenty of volume in the forefoot around my toes. The micro buckles (which Nordica says are 15.5 g lighter than a traditional buckle) were easy to latch and unlatch but I wish I could say the same about the Hike/Ride lever on the back spine of the boots. As the lever does not protrude much beyond the shell of the boot, it proved very hard to grasp and operate with gloves on.

The Nordica Strider Pro 130 Dyn Boots are most similar to the K2 Pinnacle 130’s, however, the Strider Pro’s are much lighter, by about 500gm per boot. The Atomic Hawk Ultra XTD 130 Boots are also very similar with their overlap construction, although they are lighter than the Strider Pro’s by almost 800 grams per pair. The Tecnica Zero G Guide Pro Boots while also the same overlap construction, four buckle format and 130 flex are a couple hundred grams lighter per boot as well. These comparisons illustrate how the Strider Pro 130 Dyn Boots are in the same league as these alpine style boots and aimed at a skier who values the down more than than the up.

I wouldn’t recommend the Strider Pro 130 to skiers looking for a dedicated backcountry boot for long tours. It’s just not light enough, and it doesn’t walk well enough compared to the other options out there. While there is plenty of rearward flex, the forward flex is hindered by the upper cuff hitting the lower buckle since you need to open the top two buckles in order to maximize cuff rotation. However, skiers who want something that’s very competent inbounds, and who are primarily spending their time riding lifts and only hitting sidecountry laps or shorter tours, the Strider Pro 130 is a great choice. Powerful, comfortable and able to tackle any terrain.