Atomic’s 2022/23 touring boot line is separated into two categories: ‘Fast and Light’ and ‘All-Round’. The main difference is that the Fast and Light boots retain the BOA closure over the forefoot which helps reduce weight, while the All-Round boots have foregone the BOA system in favour of a traditional buckle and Z cable which Atomic calls their Cross Lace 2.0 Closure System. While this new system adds to the boot’s overall weight it also provides increased fit by using a buckle that tightens a cable that crosses the forefoot in a ‘Z’ pattern. This is similar in nature to the buckle systems found on the La Sportiva Skorpius CR Boots, Scarpa Maestrale XT Boots, Dalbello Quantum Free 110 Boots, Scott Cosmos Tour Boots and the La Sportiva Vanguard Boots. Of all the boots we’ve reviewed recently only the Scarpa F1 LT Alpine Touring Boots and Dalbello Quantum Asolo Boots have the BOA closure system and there are even rumours that Scarpa will replace the BOA with a Z-buckle system for next season.

Atomic uses the same 98mm chassis for the new 2022/23 Backland Carbon Boots and everything else remains pretty much the same other than the aforementioned BOA system going bye-bye and a new and improved liner being added. Read the rest of the review below for more on this as well as my thoughts on how the Backland Carbon Boots perform. 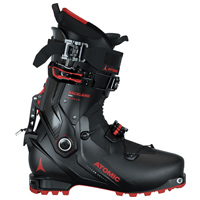 The new 2022/23 Atomic Backland Carbon Boots look very similar to their previous brethren but have a few changes that make them even better. 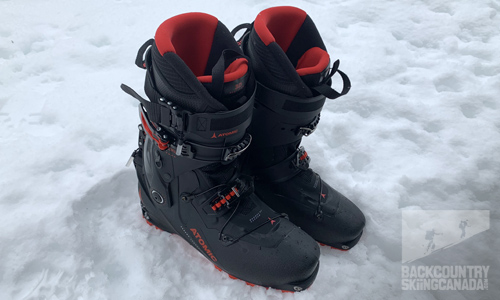 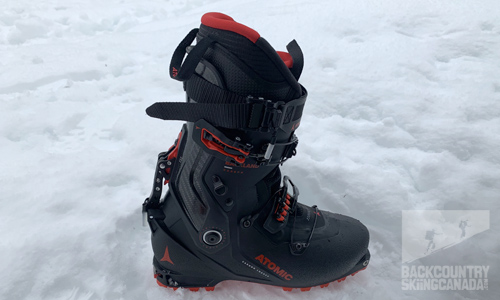 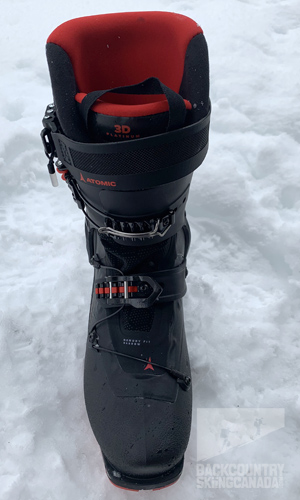 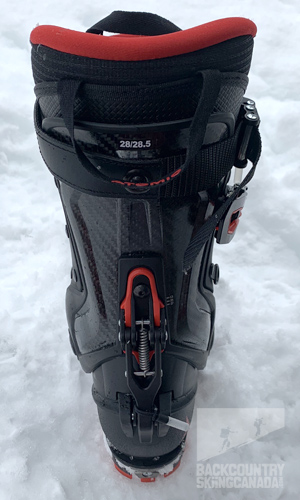 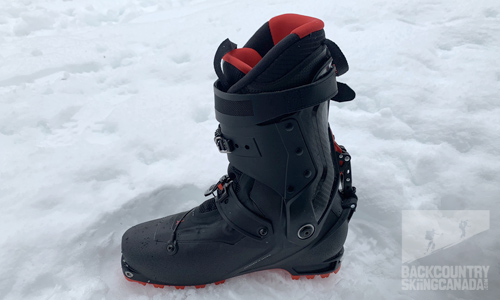 Atomic kept what worked from the previous Backland Carbon Boots and integrated it into the new 2022/23 version, namely the Free/Lock 4.0 ski/walk mechanism and Frictionless Pivot which allow for 74°range of motion. The 98mm last, carbon construction and overall lightweight design for comfortable walking on the up and power skiing on the down is also still in there. What did change is the liner and the aforementioned BOA System which have both been replaced. 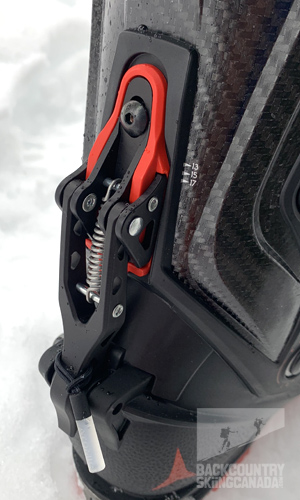 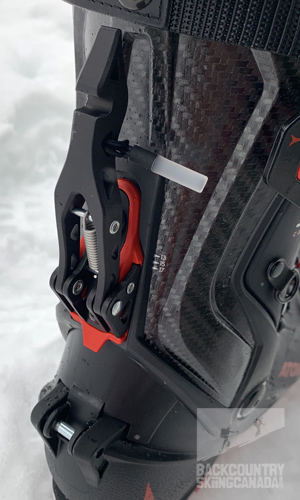 In order to provide a more secure fit, Atomic removed the BOA system over the forefoot and replaced it with a buckle and integrated Z cable system which they call the Cross Lace 2.0 Closure System. This new closure system more effectively wraps your foot thanks to the leveraged buckle design and three-point anchor system of the cable that wraps over the boot's forefoot in a Z pattern. 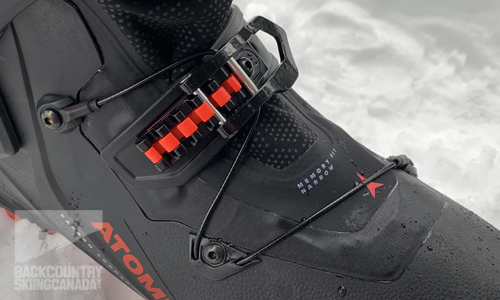 In addition to this Atomic also beefed up the Backland Carbon Boot Liners with new 3D Platinum liners made with Dry Fit Foam. This new material provides a longer-lasting fit with an improved foothold. The liner’s added cushioning provides more comfort and warmth for those that get cold feet while built-in breathable zones allow excess heat to escape, helping to keep your feet drier and warmer. A thicker tongue and plastic around the outer-upper cuff make for a more rigid fit with added support. This new liner construction will prove to be more durable over time as well as provide a better fit straight out of the box for most. As well, a new gaiter on the Backland shell uses Stretch Guard which makes it much easier to enter and exit the boot. 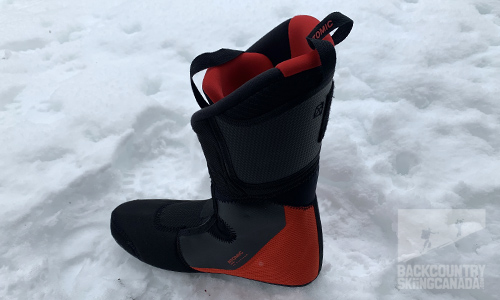 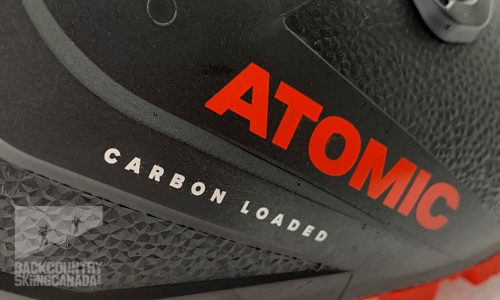 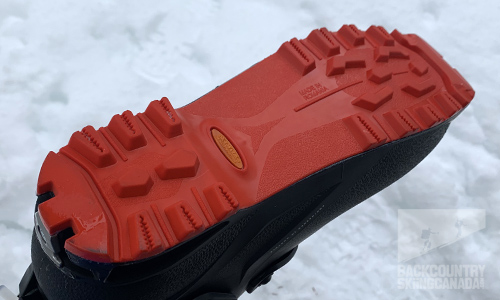 Other features include an adjustable power strap with a cam locking mechanism. 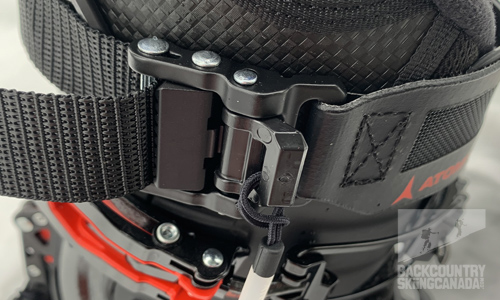 A buckle hanger so that you can easily open the top buckle without having it bounce around or lose your preferred setting. 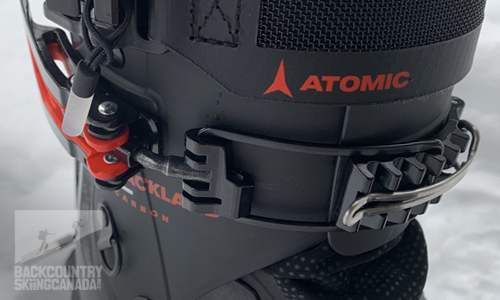 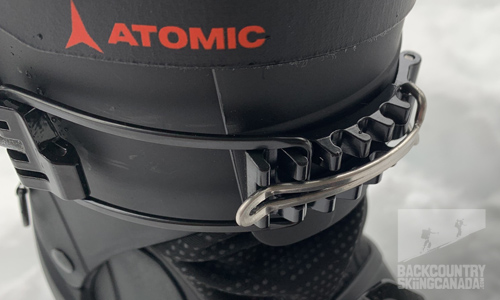 The top buckle also folds back and out of the way when fully open so that it does not interfere with your ski pants. 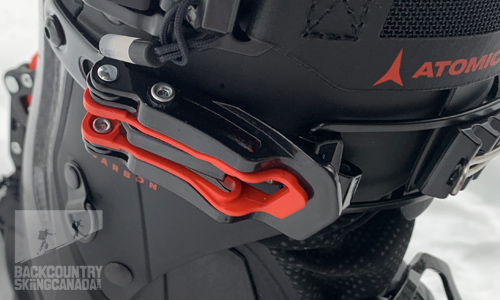 Overall the new 2022/23 Atomic Backland Carbon Boots are more of an evolution rather than a revolution. With the major changes being the forefoot closure system and liners most other features have remained the same, but what has changed is a huge improvement in my opinion. When I first reviewed the Backland Carbon Boots in 2016 and again in 2019 my main complaints were that the BOA system just didn’t allow me to tighten the boots enough to provide optimal foothold and that the liners were cold. Atomic addresses both of these issues (thanks Atomic!) with their new Cross Lace 2.0 Closure System and the new 3D liners.

To say that the Cross Lace 2.0 Closure System is an upgrade is putting it mildly. With the previous Backland Carbon Boots, I could never get my heel to seat properly due to the lack of holding force the BOA system could apply across my forefoot. I was not alone with this issue and it seems Atomic listened to its customers and now offers a much more aggressive buckle system with an integrated Z cable. This makes it really easy to tighten the Backland Carbon Boots as much as you need and force your foot down and back into the heel of the boot which goes a long way to increasing performance. It seems that Atomic came full circle on this feature as the initial Backland Carbon Boots came with a similar albeit not as robust forefoot buckle and cable system. After only three years with the BOA system, it has now been removed from half of the boots in the Backland lineup.

The new 3D liners found in the Backland Carbon Boots also definitely help improve overall comfort and performance as they provide a supportive upper cuff and breathable zones that help dissipate excess heat. The Dry Fit Foam that makes up the liners seems to be thicker, warmer and more supportive when compared to the previous thin and cold liners. I personally create a lot of heat when backcountry skiing and breaking trail so I don’t want a full alpine liner in my touring boots and find this new liner to be a great compromise in comfort, warmth and support.

The previous Backland Carbon Boots weighed in at 2,188g and the new 2022/23 versions are slightly heavier at 2,324g. This works out to a gain of about 136g which is pretty minimal when you consider the additional benefit that the new buckles system and liners bring to the equation.

Overall Atomic maintained the performance of the original Backland Carbon Boots while not messing with the cuff rotation, weight or flex—making a great touring boot even better. They performed well over the course of my testing this winter season, providing a solid (stiff enough) ski and an impressively light and comfortable climbing experience. Read my review of the previous Backland Carbon Boots here for all the details on their performance and skiability as these apply to the new 2022/23 version as well.