This crazy light alpine touring boot offers up more stiffness than its 100 Flex Rating suggests and yet still provides an impressive cuff rotation for easy walking. La Sportiva hit a home run with their new Skorpius CR Boots, so if you want to go ‘light-n-fast’ and give up nothing then these are the AT boots for you.

The La Sportiva  Skorpius CR is a lightweight touring boot designed for those that like to cover ground and who subscribe to the ‘light-n-fast’ mantra of touring, but due to their weight they're also suitable for entry-level skimo racers. Similar in design to the La Sportiva’s Solar Boots, the Skorpius CR uses a carbon-reinforced Grilamid cuff and shell to save on weight and comes with a generous 68° range of motion. Their 100 Flex Rating is a respectable jump over that of the Solar’s but not as high as the La Sportiva Spectre 2.0’s 115 rating and the La Sportiva Synchro’s stiffer 125. 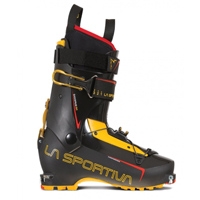 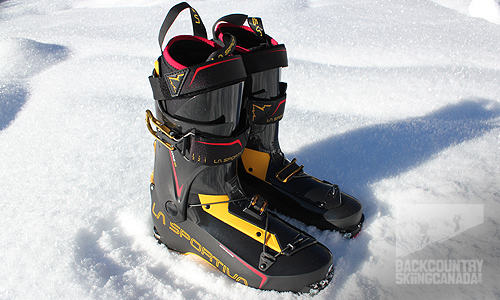 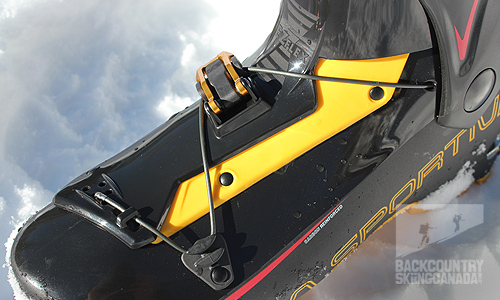 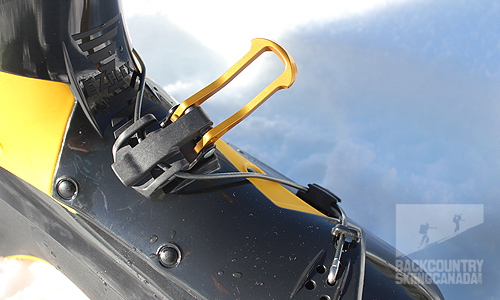 The ski/walk mode lever provides what has to be the fastest and easiest transition thanks to the Swing-Lock Closure System. It is one of the simplest design on any AT boot and doesn't get in the way of your ski pants cuffs. The lock lever swings out of the way to release the boot’s cuff end provide a full 68° range of motion, with 33° to the back and 35° to the front. When you are ready to ski, simply swing the lock closure back down and the Skorpius CR stiffens up to an impressive (and I think underrated)100 Flex. 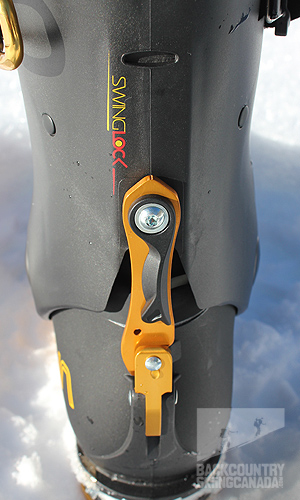 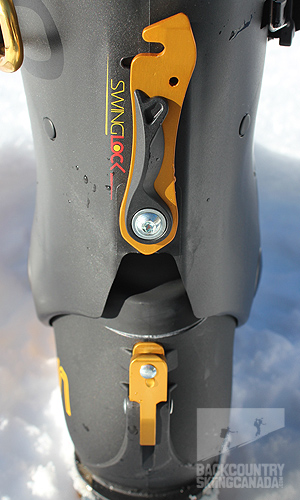 The Skorpius CR Liner has a minimal thickness in order to keep the Skorpius Boots light but they still provide warmth and cushioning while not limiting the boots flex thanks to the integrated flex zone. 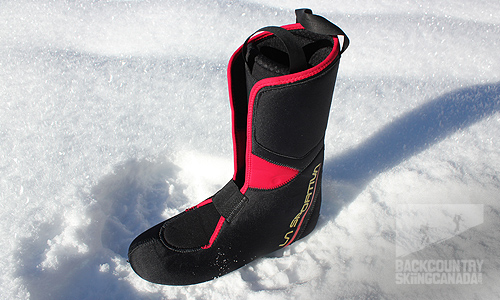 On the underside of the Skorpius CR Boots, you’ll find La Sportiva’s Grip Guard soles which provide impressive grip on rock and ski resort cafeteria floors as well, all without adding much of a weight penalty. 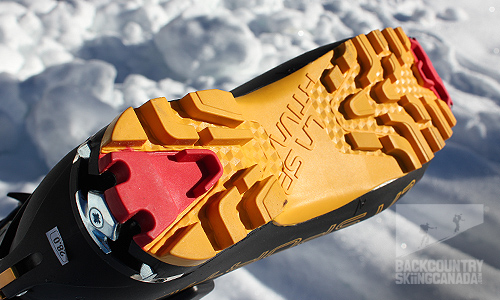 Just below the power strap you’ll find the top buckle which is comprised of a wide adjustable velcro strap attached to a metal buckle. This buckle is easily opened to enhance the walk mode and is removable on one side to help to get in and out of the Skorpius CR Boots. 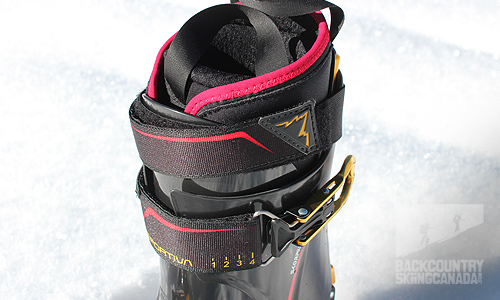 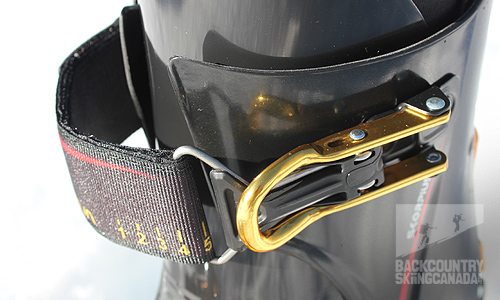 La Sportiva remains one of the few alpine touring boot manufacturer’s that provide a Trab TR2 compatible heel insert. They of course are also tech compatible as this is far and away the most common touring binding on the market. 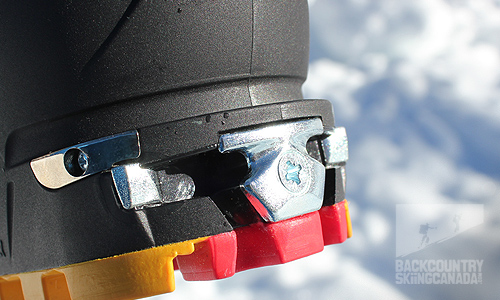 Lets do a 360° overview of the Skorpius CR Boots, shall we? 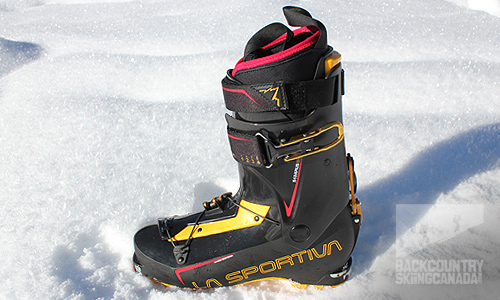 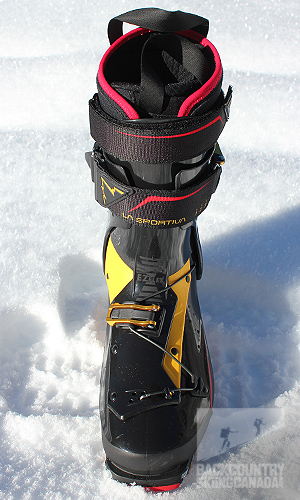 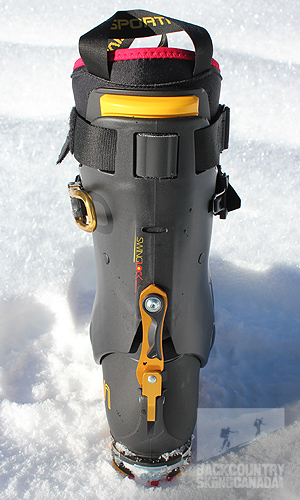 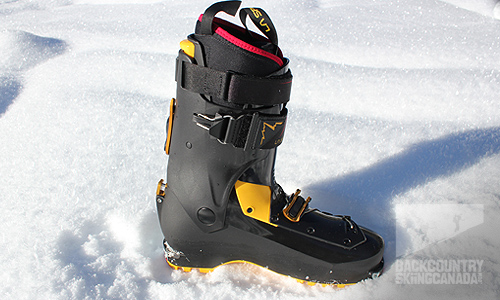 Although I am a huge fan of the La Sportiva Spectre original and 2.0 versions I was excited to give the much lighter Skorpius CR Boots a try, I have to be honest though, I was expecting it to be better at the uphill than down. This is because as alpine touring boots get lighter they also generally become less powerful and responsive on the ski. Luckily this was not the case with the Skorpius CR Boots.

For starters, since it's a super-light AT boot the cuff height on the Skorpius CR Boots is generous and higher than most which lead to added support and power. This is where other brands will save on vast amounts of weight, by shortening the cuff height—as well as skimping on the liners. La Sportiva did use a much lighter liner in the Skorpius CR Boots in order to trim some fat and while not as comfy as those found in the Spectre 2.0 boots, they are still acceptable. I wasn’t, however, able to test the Skorpius CR’s on a really cold ski day (talking -15°C and lower) so I can't vouch for how warm they would keep your feet when things get really cold, I'm guessing not as well as thicker liners.

The fit right out of the box was impressive for the Skorpius CR Boots, while my foot is not that unusual, I was happy to simply replace the stock footbeds with my custom ones and hit the skin track. No other modification was needed but I did end up getting them thermo-moulded, which only improved things more. I found the toe box to be very spacious and there is also considerable room in the forefoot but the front Spider buckle takes care of this and provides a great foothold when secured. This buckle is fixed but can be opened in two steps, first the metal buckle itself and then the plastic portion of the buckle which provides much more volume to facilitate entry/exit of the boots. However, I found that the Skorpius CR Boots were still tight to put on given that my heel would hit the back of the shell and I’d have to really force it to get it inside the heel pocket. Opening up that front Spider Buckle in the two steps described above is a must in order to help with this and while not a show stopper this is something that takes time to get used to. Also, something to note, this Spider Buckle only has two settings and no micro-adjustment so hopefully one of the two options works for you.

The feature I am most impressed with has to be the design of the ski/walk mechanism. This Swing-Lock Closure System is both simplistic and genius all in one. As the name suggests you simply rotating or 'swing' the mechanism down to lock into ski mode and up to enter walk mode. Nothing complicated, easy to use and very few moving parts so there is less to ice up and/or break.

In walk mode I struggled to bottom out the Skorpius CR in either the front or back direction, the 68° of flex is more than enough and it’s a firm yet fluid motion unlike some other AT boots I've tested. While I was able to hike with the Skorpius CR fully buckled up there was some additional range of motion to be had when the top power strap buckle was opened, although not required for a comfortable stride on the skin track.

Skiing down is where the Skorpius CR really surprised me. Given that the Flex Rating is only 100 I was expecting a less than solid ride but it was super stiff and provided great support. I could easily drive my fat 110+ skis through early season pow and chunder. The flex pattern could be slightly more progressive, however, I think that this desire stemmed mostly from the fact that the liners are thinner than normal and didn’t provide as much support on the shins as I would have liked. The Skorpius CR Boots easily felt as stiff as the Spectre 2.0’s even though those boots are rated at 115 versus the Skorpius’s 100 rating. With a weight savings of 890g (for the pair) over the Spectre 2.0 Boots and 8° more cuff rotation, well, I’m sold on the Skorpius's. These boots are ideal for the average recreational backcountry skier that wants to go light and fast as well as prehaps get into a little skimo racing.