Three years in the making and well worth the wait. The new La Sportiva Vanguard Boots didn’t disappoint on performance, comfort or innovation. The cuff, shell, and sole all use an eco-friendly material derived from bio-based RNEW 1100 Castor Oil Seed Pebax which is good for the planet. And, you get a 130 flex that weighs in at well under 3kg—they kick ass on the skin track and the downhill.

La Sportiva put as much innovation into each and every aspect of the new Vanguard Boots as possible. They relied heavily on their extensive experience designing and manufacturing alpine touring (AT) boots over the years and their history of making Italian footwear since 1928. We’ve reviewed five pairs of La Sportiva AT boots over the last eight years and of those we’ve rewarded four of them with our prestigious Gear of the Year Award which only confirms that La Sportiva knows a thing or two about AT boots. If you want to read those reviews, here they are in ascending order by date: La Sportiva Spectre  Boots, La Sportiva Spectre 2.0 Boots, La Sportiva Synchro Boots, La Sportiva Skorpius CR Boots and the La Sportiva Vega Boots. Rest assured though, these new Vanguard AT Boots are like nothing before and push the limits of what a full-featured three buckle boot can weigh without sacrificing performance. The Skorpius CR Boots are lighter than the Vanguards by 740g but the Vanguard Boots are lighter than the other four other boots by at least a few hundred grams and they in addition to that they offer a 130 flex which is stiffer than all the other boots reviewed. Let’s dig in. 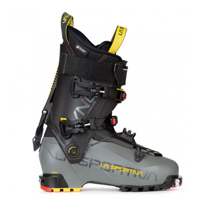 Gone are the flashy Euro colours and designs of previous La Sportiva Boots, the Vanguards are just black and grey—simple and to the point. 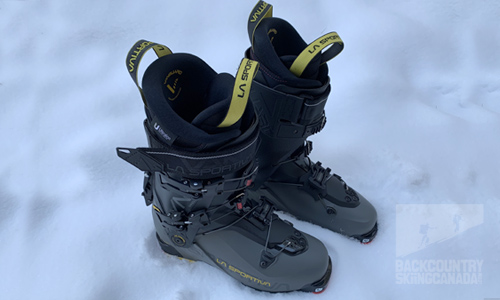 La Sportiva has spent over three years perfecting the Vanguard Boots and built them on a brand new mould. They have integrated a long list of innovative new features that we’ll go over below, the most important being that the Vanguard’s cuff, shell, and sole all use an eco-friendly material derived from bio-based RNEW 1100 Castor Oil Seed Pebax which has a high durability at low temperatures and yet still provides excellent flexibility. 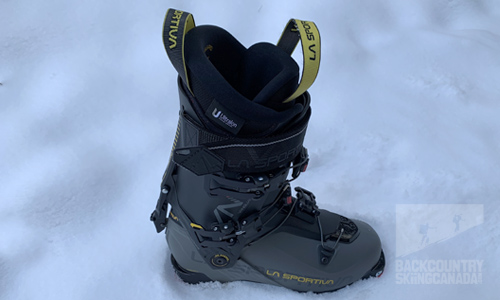 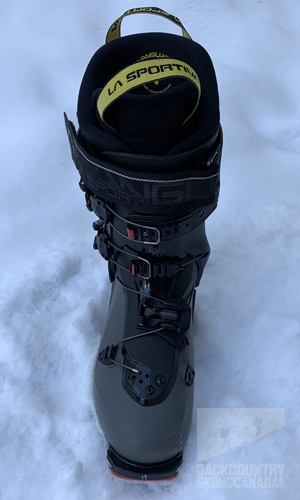 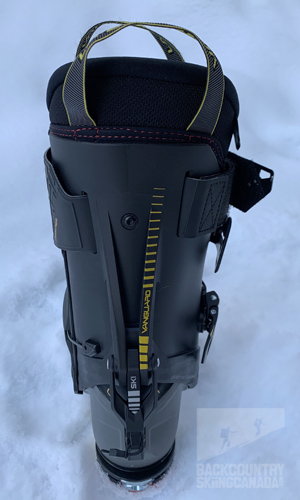 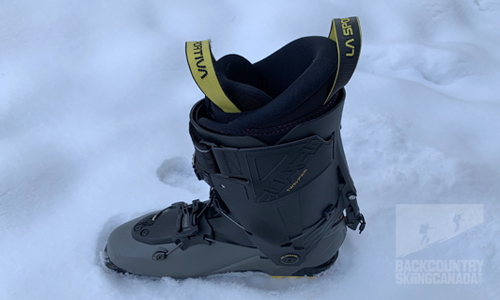 La Sportiva has done away with their overlap and Cabrio designs of the past and has employed a new design in the Vanguard Boots which they call their V-Shape Cuff. This has a scissor-like opening in the cuff with the tongue then positioned over this and a second firmer outer cuff over that. La Sportiva calls this their EZ-Flex double tongue which is responsible for the impressive 63° range of motion in walk mode and stiff 130 flex in ski mode. 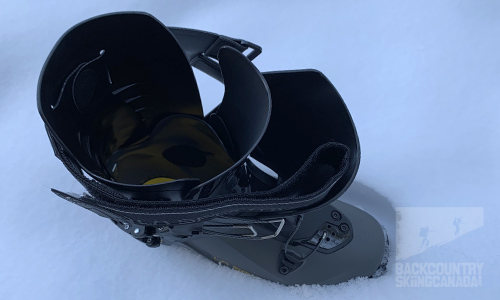 To switch from walk to ski mode you simply disengage the EZ-Lock Closure System on the spine of the Vanguards. It’s made from Ergal (just a commercial name for 7075 aluminum alloy) and polymers which makes the mechanism extremely strong yet light. The EZ-Lock Closure is a simple yet highly effective design that enables fast and efficient transitions. 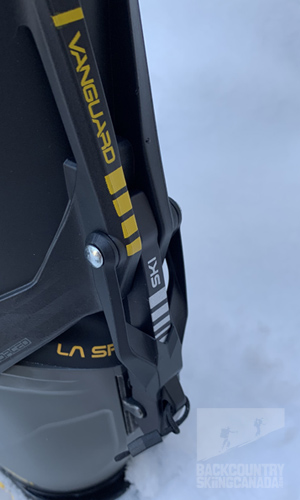 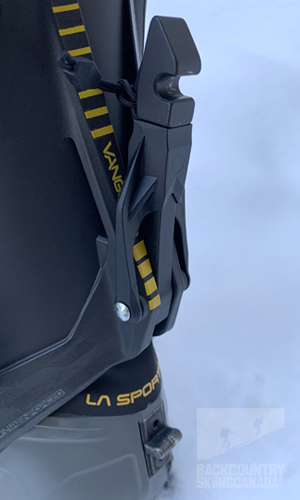 To keep your foot secure in the Vanguard Boots, La Sportiva has used a Double Release lower closure system that uses a durable/adjustable cable system that provides a wide coverage where two buckles would normally be used. This wire closure system, however, reduces weight with out sacrificing performance. The buckle is compact and the double closure allows you to open the buckle once to release tension and provide more freedom in walk mode, or open the second release to provide more room for entry and exit of the boot. 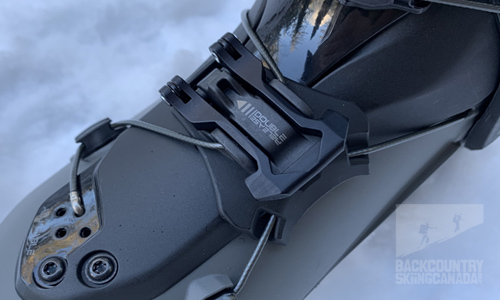 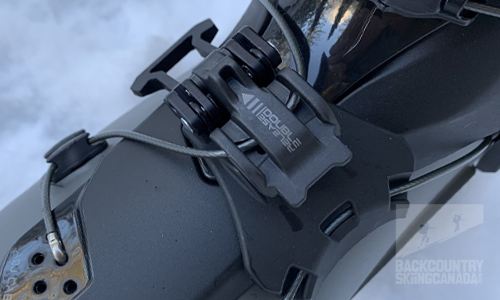 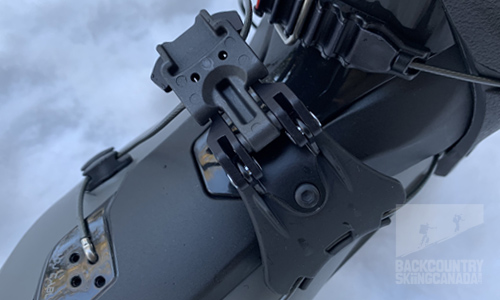 The buckles found on the upper cuff of the Vanguard use a patented compact buckle design that keeps the buckle lever flush to the shell in walk mode, reducing external bulk. The lower of the two upper buckles uses an integrated cable system to effectively reduce weight while seating your heel back in the boot for better performance. The top buckle is affixed to the Twin Power Band which combines the upper buckle and Power Strap to again reduce weight and ensure comfort and precision. 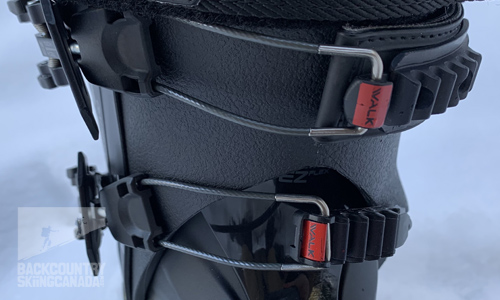 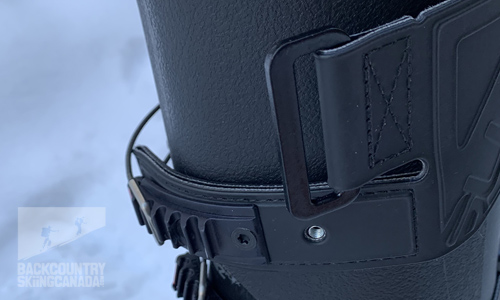 At the toe and heel lug of the Vanguard’s you’ll find La Sportiva’s V-Guard interfaces which provide a more abrasion-resistant integration of the tech fittings and ensures less wear on the boot at these locations. The Vanguard is also compliant with UNI EN ISO 9523 standards and is compatible with all tech and frame style touring bindings which provides you the flexibility to ski with several binding types.

Inside the Vanguard Boots, you’ll find thermo-moldable Ultralon foam liners which provide a lot of padding and insulation and are very comfortable right out of the box. There are two flex zones built into the liners to facilitate a more natural flex when climbing and different thicknesses of foam in specific locations to work seamlessly with the outer cuff while in walk mode. 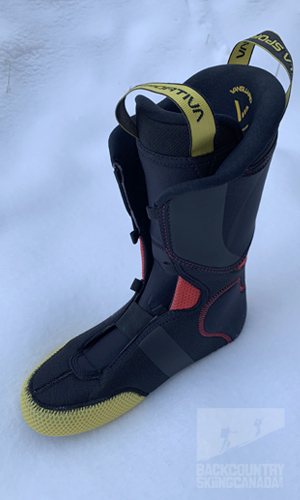 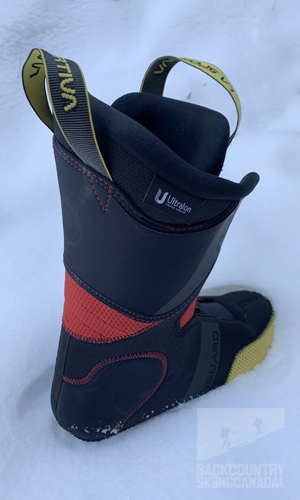 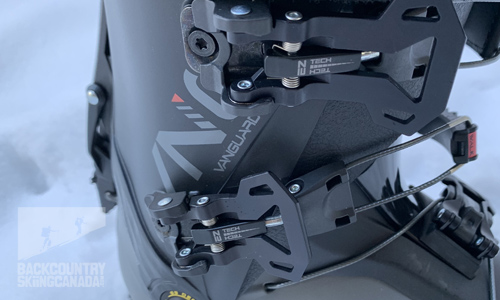 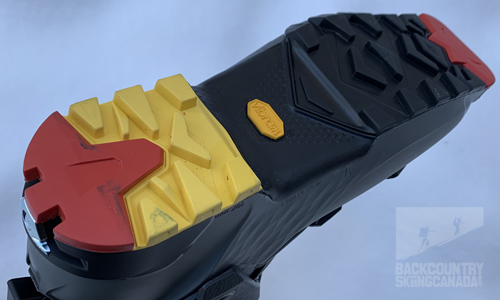 It's rare to find a stiff yet light touring boot, generally as you remove weight you also (typically) have to forego some of the boot's rigidity. Somehow La Sportiva has figured out the magic formula to make a 130 flex boot that only weighs 2740g or 6.0lb for the pair. While this weight won’t break any records it's more than respectable considering that this is a three-buckle boot that provides a lot of features and a comfortable full-thickness liner. I’d place the Vanguard Boots amongst the Dynafit Hoji Pro Tour Boots, Scott Freeguide Carbon Boots, Scarpa Maestrale XT Boots and even La Sportiva's own Vega Boots when it comes to competitors. The difference is that the Vanguards are lighter and/or stiffer than all these other boots listed.

What I was most impressed with about the Vanguard boots was not really any of the features mentioned above—although the Double Release Buckle is a really innovative design that facilitates a more comfortable touring mode. The fact that the Vanguard is a large powerful boot and yet is able to still be so light is what made me smile the most.

All of the features and specs come together to make the Vanguard a high performance ski boot that will take on anything you throw its way, but it is also light enough to climb all day. This is a stiff boot and that means you can ski hard and with confidence on bigger skis and in tougher conditions and it still weighs under 2,750 grams for the size 27 pair.

While touring, I noticed how little resistance there was in the cuff while in walk mode. I was able to get quite a bit of that 63°’s of cuff rotation with all the buckles done up, undoing the top buckles I could then easily max it out. And, the Vanguard doesn’t play favourites, you get just as much forward cuff rotation as you do to the back, something that a lot of other AT boots fail to do. When the skin track got steep I was able to dig in and flex forward as much as I needed to get an aggressive step up.

Having been a big fan of the La Sportiva Spectre and Spectre 2.0 AT Boots for many years I can confidently say that the Vanguard is not only a touch lighter but it’s stiffer and skis like a much burlier boot. Some how La Sportiva has created a true freeride touring boot that blows the rest of the competition away when it comes to comfort, features and weight savings.

I highly recommend you give these boots a try if you are in the market for a new pair of high performance AT boots.