Scott’s new Freeguide Carbon Boots use a Cabrio Hybrid 3 piece construction. It's called “hybrid” because it combines the Cabrio 3-piece construction with an inner overlap design for increased power and more precise energy transmission to the skis while improving comfort and walkability. This partial overlap cuff design ensures a short yet progressive forward flex in ski mode while still allowing for a massive cuff rotation in walk mode. 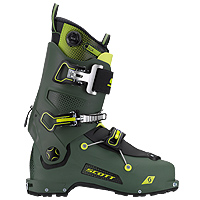 Scott Freeguide Carbon Boots use lightweight materials and a streamlined design to minimize weight without sacrificing performance or weight. 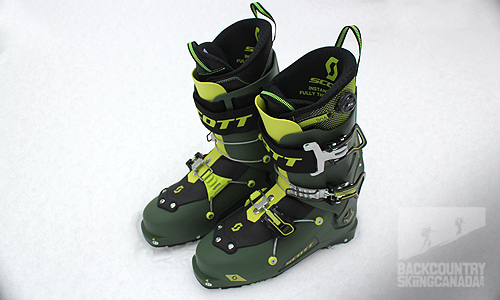 The majority of the Freeguide’s power and comfort come from its carbon-reinforced grilamid shell which provides impressive support and garner them a well deserved 130 flex rating. Their progressive stance has a forward lean of 15° which advanced skiers will appreciate. 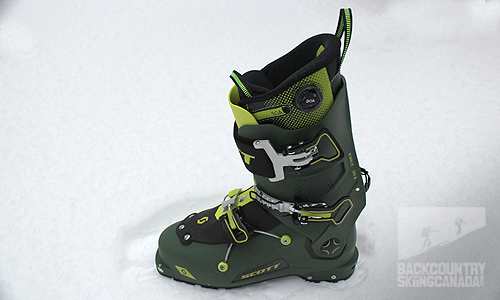 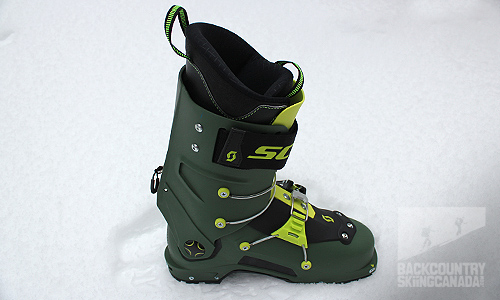 The integrated ski/walk mechanism and 2-part dual action tongue allow for an impressive 60° of cuff rotation. A quick flip of the switch takes the Freeguide Carbon Boots from ski to walk mode and back again with no external mechanics to freeze up. 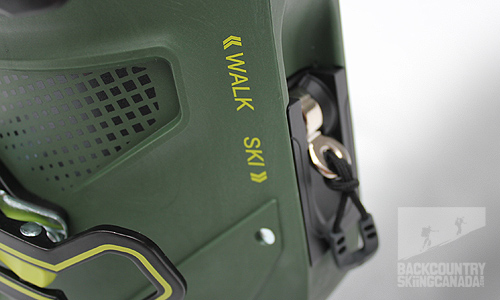 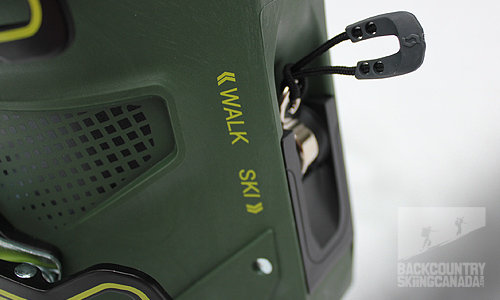 The two lower buckles and upper power strap combine to firmly hold your foot and seat it snuggly in the liner’s heel pocket. Even with out any heat moulding or boot fitting the Freeguide Carbon Boots fits remarkably well straight out of the box. My average to slightly wider foot was snug and comfy with surprisingly good support and overall foot hold. 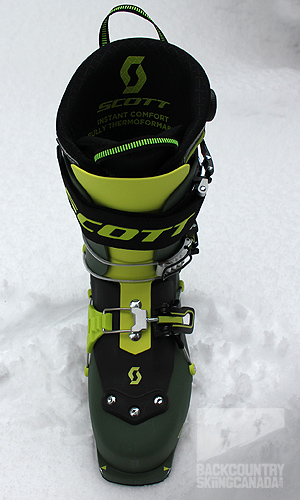 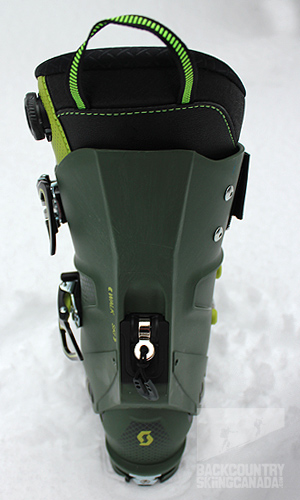 The forefoot buckle uses a simple wire design to replace the weight and complexity of two buckles while effectively compression the shell to firmly hold your foot. 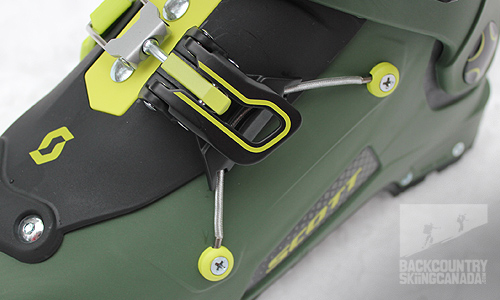 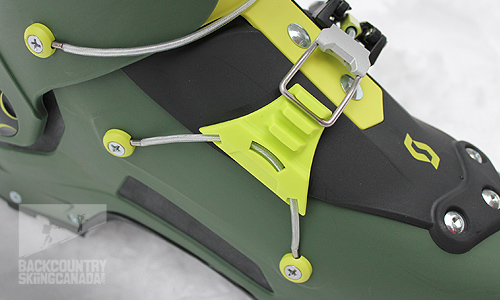 The upper buckle has an integrated buckle keeper so that you can open up the buckle without fear of it coming unclasped while in touring mode. 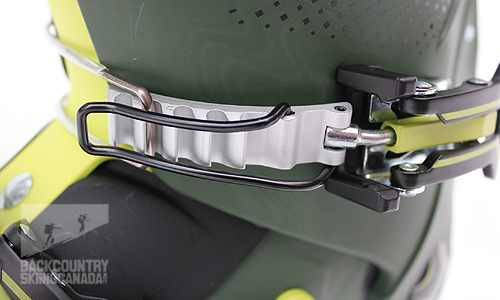 On the outside of each of the Freeguide’s liners, you’ll find the Boa micro-adjustable locking system which hugs your foot and synches down to provide a secure foothold and exceptional comfort. This helps to improve both the uphill and downhill performance of the Freeguide Carbon Boots while also keeping your feet warm. These liners are of course thermomouldable for added customization to your individual feet. 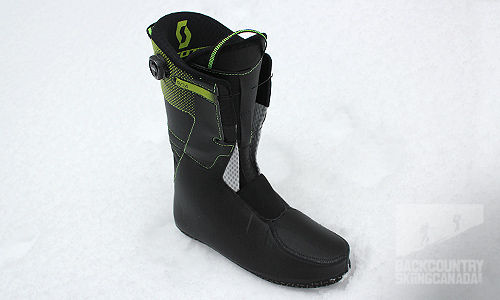 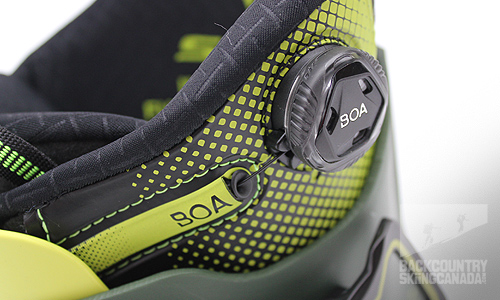 Integrated tech fittings on the toe lug ensure that the Freeguide Carbon Boots are compatible with frame and tech touring bindings. 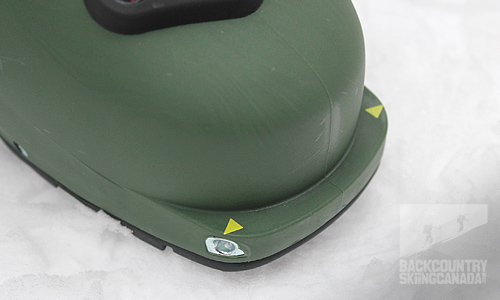 On the underside, the Freeguide Carbon Boots use Skywalk Rubber soles for precision and grip on rocky peak scrambles and cafeteria floors alike. 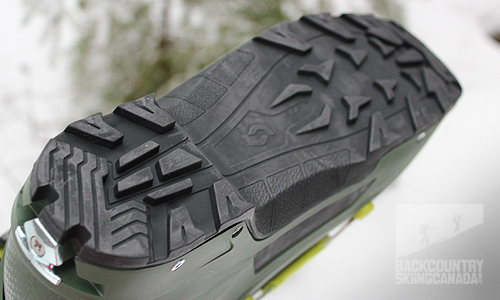 If you are looking for other Scott AT Boot reviews then check out our review of the Scott Superguide Carbon AT Boots here.

After spending the last month or so skiing in the Scott Freeguide Carbon Boots I’ve come to realize that they are adept at backcountry (which they were purposely designed for) as well as skiing the resort. Their 130 flex rating means that these are serious boots for serious skiers and that they won’t wimp out on you when you compression out after an air or in the bumps. (I enjoy the later not the former).

If you are looking for comparisons, the Scarpa Maestrale RS and Tecnica Zero G Tour Pro Boots would be similar boots to the Freeguide Carbon’s with nearly identical weight, flex rating and range of motion.

With a weight of only 2,910g or 6.4lb (for the size 26.5) this places the Freeguide Carbon Boots respectively in the middle of the pack for weight—neither heavy nor super lightweight. This means they that they climb efficiently enough (although don’t think about rando racing in them) and more importantly ski exceptionally well. They feel super solid in any terrain which means you can count on them to deliver as all-mountain touring boot.

While the Freeguide Carbon Boots have a more than generous 60°of flex in walk mode, you will have to undo the top buckle to appreciate even a single degree of it. Once you open the power strap and top buckle you can relish in the boots full flex but be forewarned that most of this flex is to the back of the boot and not the front. While this is beneficial for those that climb with their weight more to the back of their skis on steep terrain (not sure why you’d do this) it would be nice to see more of a balanced flex with half of it to the front and half to the back.

These two minor grievances aside, if you are looking for a pair of touring boots that are relatively light for the climb up and yet still powerful on the down then the Scott Freeguide Carbon Boots may just be for you.