This new lightweight 4-buckle alpine touring boot from La Sportiva is based on their Spectre 2.0 boots but better in so many ways. The Vega is stiffer but still has a crazy huge cuff rotation so it skis like an alpine boot but tours like a backcountry boot. The best of both worlds in the new Vega AT boots from La Sportiva.

La Sportiva has always impressed us with their Alpine Touring (AT) boots—from the original Spectre to the Spectre 2.0, both of which have won our Gear of the Year Award. There is also the stiffer more ski mountaineering focused Synchro Boots and the Rando ready Skorpius CR Boots that barely break the 2-kilo weight limit. New for this season, La Sportiva just released their Vega AT Boots which are available for both him and her. Think of these as the Spectre 3.0 since they utilize the same shape and shell characteristics but go one step further with a few new additions that make the Vega stiffer and more comfortable. Click the orange bar below for the full review and join us as we dive into the new La Sportiva Vega Boots. 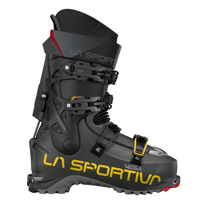 Watch the following video of the La Sportiva Vega Boots to learn all abou them.

A quick glance at the La Sportiva Vega Boots and you'd think that they look very similar to the Spectre AT boots from a few years ago but look again and you’ll see these are an upgrade in several ways. 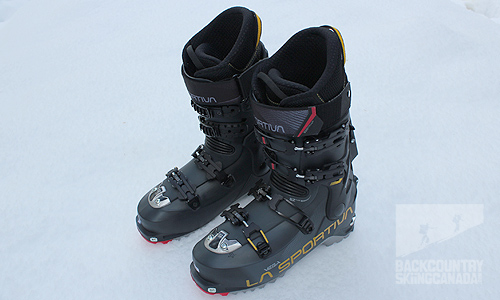 In Latin, “Vega” means “the descending eagle” but I’d argue that this AT boot is equally as proficient at climbing as it is descending. This is a 4-buckle, alpine touring boot that is impressively lightweight (1445 grams for the size 27.5) especially given that they have a 125 flex rating. This is due in part to their Pebax cuff with carbon-reinforced Grilamid spine and shell. This all adds up to provide a nice progressive feeling flex that allows for quick responsive turns with easy initiation yet maintain their lateral stiffness. 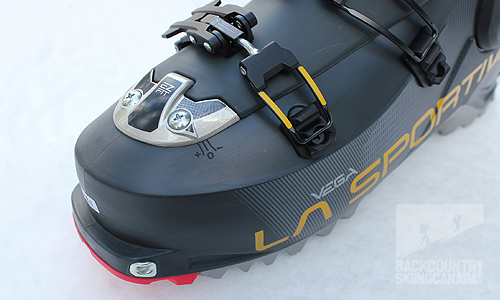 With a 60° range of motion in walk mode, you can take big aggressive strides and climb with ease on the steepest of grades. Flip the ski/walk mode up into ski mode and you get a super solid 125 progressive flex boot that compares to that of an alpine ski boot. 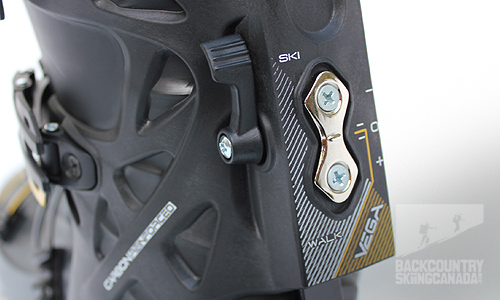 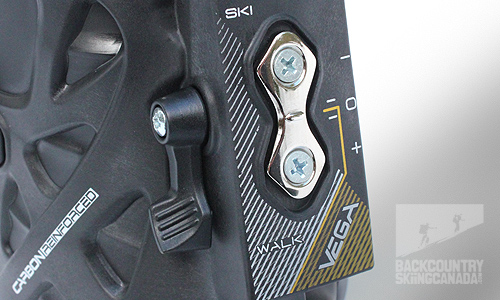 With a Vibram soled on the bottom, the Vega Boots can be used in any MNC compatible binding and provides a super grippy platform for rocky summit ridges and resort cafeteria floors alike. 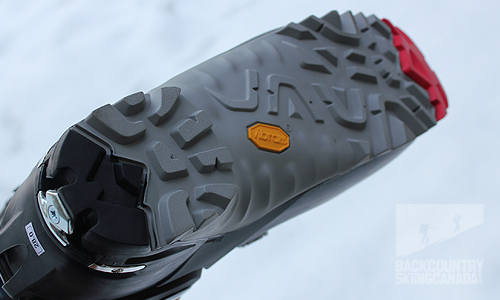 Carried over from the Spectre 2.0 Boots are the roomy toe box design and wide 102.5mm last along with the same great 60° cuff rotation and 4 buckle design. What’s new, however, is the easy to use, more traditional buckle design with micro-adjustable arms, a newly updated liner with better comfort and durability and an updated ski/walk mechanism that is said to be less prone to wear and tear for longer life on the snow. 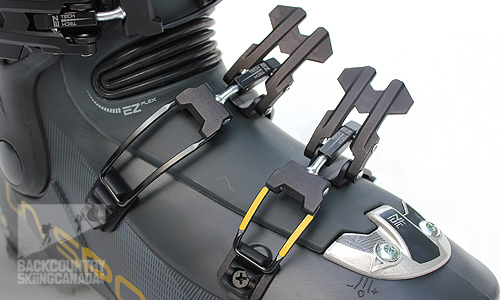 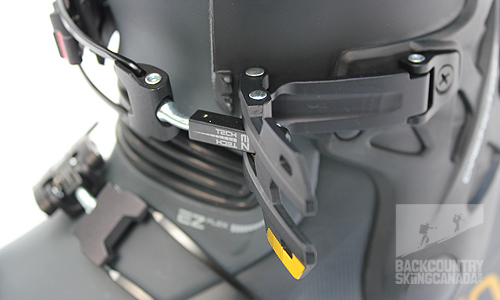 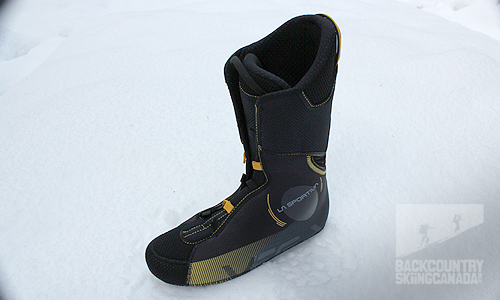 The top two buckles under the powerstrap have a built-in catch so that when you unbuckle in walk mode the buckles will not flap around annoyingly. 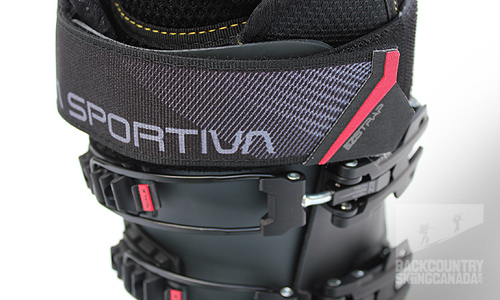 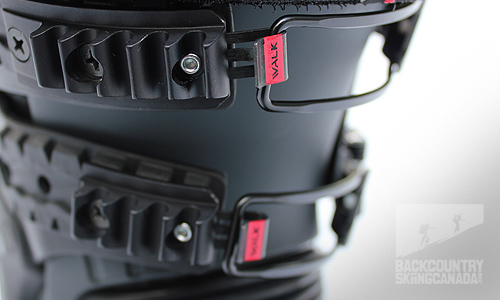 The same EZ Flex Zone is found on the Vegas as it was on both versions of the Spectres. 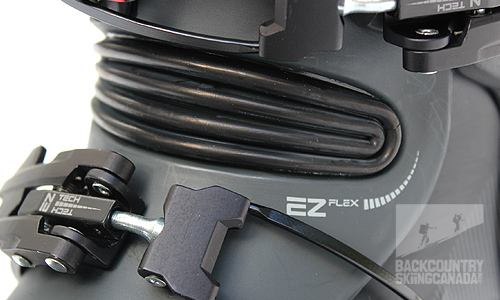 The three-piece shell design makes it very easy to get into and out of the Vegas. 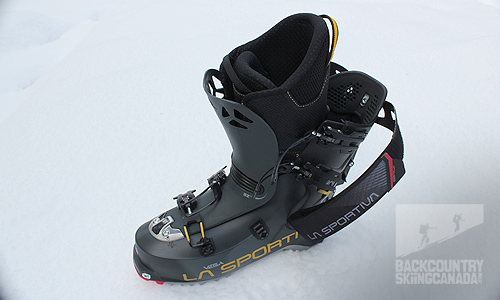 Given that both the original Spectre boots from La Sportiva and their successor the Spectre 2.0 won our Gear of the Year Award, plus the fact that the Vegas are built on the same shell design—I was pretty confident that the Vegas would not disappoint. With the weight of the Spectre and Vega Boots being identical, it’s impressive that La Sportiva was able to incorporate so many upgraded features like a more comfortable and beefy liner, more intuitive user-friendly buckles and an updated ski/walk mechanism. Not to mention the Vegas have a 125 flex rating compared to the Spectre 2.0’s 115, so you get a stiffer ride and are able to push the performance of the Vegas with no real weight penalty.

The toned-down graphics and colour scheme are a welcome improvement over the flashy design of the Spectre 2.0 and Synchro Boots as are the Vega’s buckles which are more traditional in design and super easy to open with gloves on. In addition to this, the new Vega buckles have built-in catches on the top two buckles so that you can unclasp them and they won’t flail all over the place. It is important to note, however, that you don’t need to unbuckle the top two buckles nor the power strap when you go into walk mode, like the Spectre boots, the Vegas allow an impressive 60° range of motion while still being fully buckled. This is a rare feature on most AT boots as most require a full unbuckling of the top half of the boot in order to take advantage of the full cuff rotation.

Overall, it’s hard to find anything to fault the Vega Boots with anything, if I had to be picky though I’d say the internal walk/ ski mode is a little concerning given how the previous Spectre mechanism used to freeze up in walk mode on super cold days as the internal metal pieces would frost up and seize. Hopefully, this has been addressed in the Vegas and why La Sportiva didn’t see a need to go with the more common and simpler external walk/ski mode design.

If you are looking for one of the lightest 4 buckle 125 flex rated alpine touring boots that also provides a 60° range of motion then this it is. Especially if you like a comfy out of the box fit with ample toe room and a wider 102.5mm last. The new Vega Boots takes the previous Spectre Boots one step further to the 3.0 realm.