The latest iteration of the Backland Carbon Boots comes at us with a few new upgrades but what Atomic did keep is the carbon spine, crazy 74°of cuff rotation and stiff 110 Flex rating. They also managed to lightened things up a little. By removing the original Backland’s forefoot cross lace cable buckle and solid tongue, Atomic was able to save 140 grams (per pair), it replaced these items with a BOA closure system and fabric tongue. This enables Atomic to keep the Backland Carbons in the ultralight alpine touring boot category and even notches them up a few pegs compared to others in the same field. 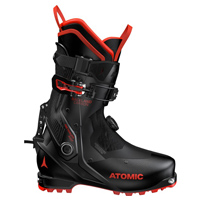 Beauty is only skin deep with the Atomic Backland Carbon Boots as the features and specs deliver! 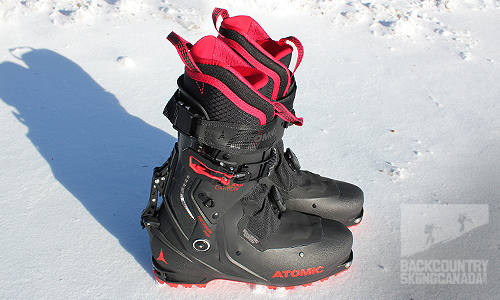 This new lighter version of the Backland Carbon Boots is mostly thanks to the BOA closure system and fabric tongue which as I already mentioned, replaces the previous forefoot cross lace cable buckle and rigid tongue. The BOA system, for the most part, is easy to use and snugs down your forefoot saving the need for an additional buckle (or two). 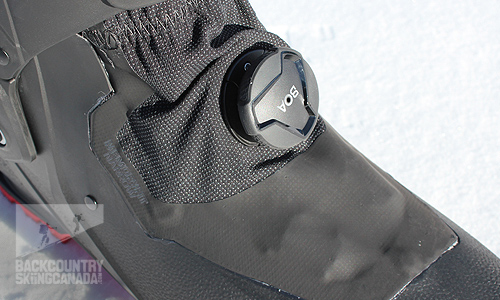 Additional weight is saved by using carbon in the spine of the boots, this also adds responsiveness and good power transmission yet maintains sensitivity. 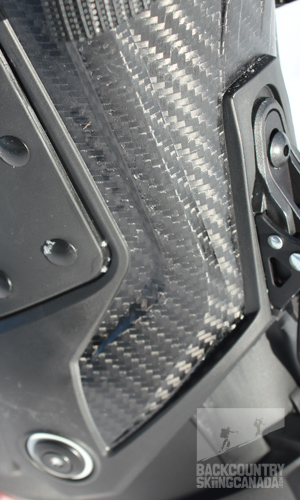 The rest of the Backland Carbon's use an ultralight carbon with Grilamid to further improve weight savings and also increases shell and cuff strength. 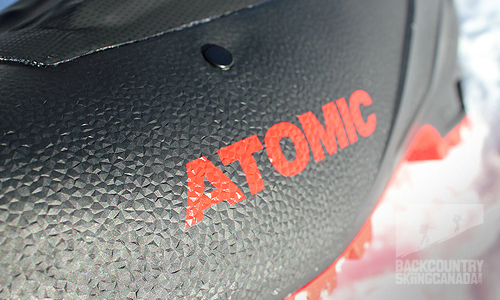 The single buckle located on the upper cuff has a built-in keeper to ensure they stay buckled in walk mode and the adjustable power strap above this provides added support and performance while skiing. 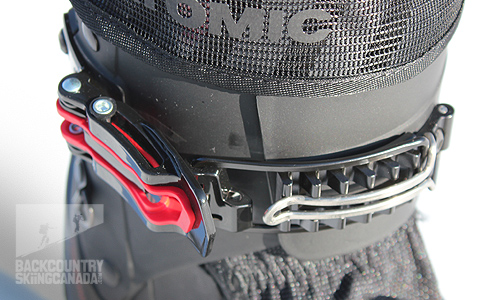 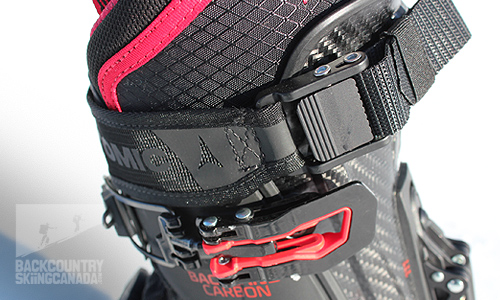 Inside, Atomic provides a thermo-mouldable platinum liner which uses Ultrathon foam and calf, ankle and tongue support zones to improve downhill performance. The liners are also washable and fast drying to ensure longevity and a pleasant smell after continued use. 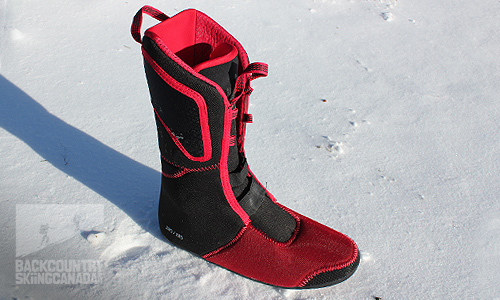 On the underside of the Backland Carbon Boots, you’ll find rockered rubber soles for grip on summit ridges and slippery lodge floors. 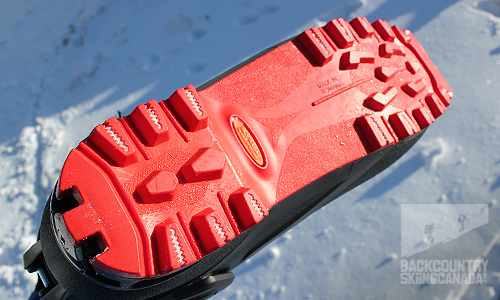 The Free/Lock 4.0 mechanism found on the spine of the backlands allows for an impressive 74° range of motion in walk mode. Then, flip the Free/Lock mechanism down and you’re ready to ski with a stiff 110 Flex Rating. 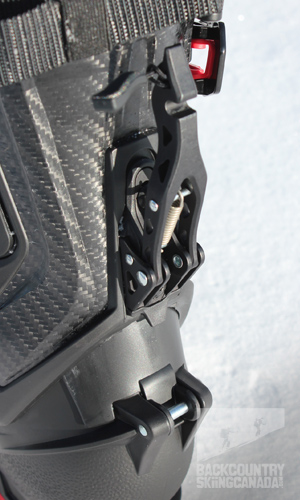 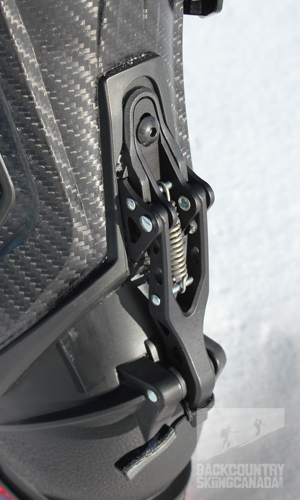 The Backland comes in several versions, for men, there is the Carbon, Pro and Expert boots and for female backcountry skiers, there are Pro W and Expert W models. Below you can see the Backland Carbon from all angles, pretty sweet looking boot if you ask me. 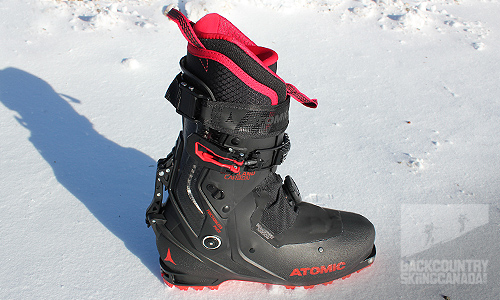 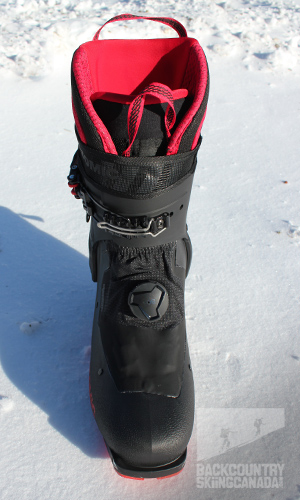 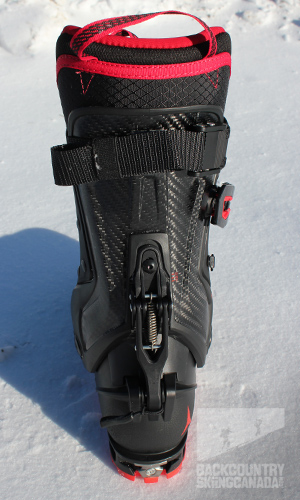 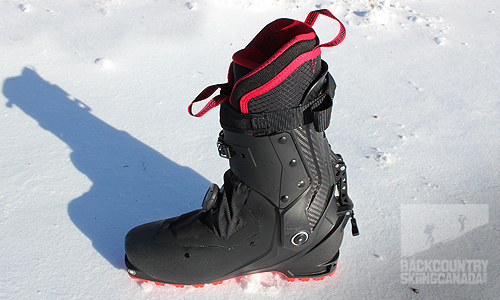 The new Atomic Backland Carbon Boots are similar to the previous versions in a lot of ways, they have the same flex rating and cuff rotation, however, Atomic integrated a BOA closure system where the forefoot buckle was found previously. This in conjunction with the removal of the rigid tongue saves a total of 140 grams, but I feel that the support and foothold that you sacrifice is not quite worth the weight savings. While the BOA does a fine job at holding your foot snug, if you are like me and want to crank it to 11 before you descend, well, the BOA can’t comply. I’m not saying that my foot was floating all over the place, I just found that the BOA closure system left a little to be desired for those of us who like their boots cranked tight.

By turning the BOA knob a series of cables constricts the shell around your forefoot, tightening it, but there is a limit as to how much you can cranks things. To release the pressure you simply pop the BOA knob up and the tension on the cables is released and the shell relaxes. Overall, I found the boots fit very comfortably and provided great support, although without enough forefoot pressure I did find that seating my heel into the boot's heel pocket was not as successful as it could be. My vote would be for a return of the previous forefoot cross lace cable buckle as it worked better in my opinion.

Along with the removal of the forefoot buckle, Atomic also did away with a rigid tongue which is similar in design to that of the Salomon S-Lab X-Alp Boots. This makes sense as both Atomic and Salomon are owned by Amer Sports and they would naturally share technologies and design innovations.  The use of a fabric cuff-closure instead of a rigid one means that there is no resistance when you walk in the Backland Carbon Boots which allows you to enjoy their full 74° range of motion. The fabric cuff-closure is held in place by two magnets which adhere the fabric tongue to the boot’s liner which prevents any snow from getting past it and coming in contact with the liner or interior of the shell. The only issue with this design is that given the boots massive flex, it often means the cuff-closures come loose and flop around which lets in snow. A longer cuff would eliminate this problem but there needs some way for it to be removed from the liner to facilitate boot entry and exit. I also worry about the constant flexing and ultimate tearing or wearing away of this fabric tongue.

The liners Atomic has used in the Backland Carbon Boots are much more plush and thicker than those found in other ultra-lightweight AT boots. This means that they’ll keep your feet more comfortable and also warmer on colder days which they did for me while ski touring at -15°C one morning. The padding and support of the liners is truly impressive, especially when you consider that this is where Atomic would be looking to save additional weight, but I’m glad to say they didn’t skimp on these liners as they did in the previous version. One feature I also really like is that you can wash the liners which goes a long way to keeping that nasty liner-foot-funk at bay.

One other small criticism that I noticed with the Backland Carbon’s is the fact that the powerstrap ratchet is located far back on the outer side of each boot so when you tighten them up they end up completely around the back of the boot which makes it harder to adjust and loosen. While not a deal-breaker it is something that struck me as odd.

I skied the Atomic Backland Carbon Boots on my Blizzard Zero G 105 skis and the new Backland 107 Skis while touring around Whitewater Ski Resort in the Selkirk Mountains near Nelson BC. Pre-season tours were limited due to a lower than normal snowpack but I got to spend considerable time in the Backlands on low angle and steeper lines in both soft powder snow and some of the worst re-frozen garbage snow I’ve had the misfortune of skiing. While I was impressed by the Backland Carbon’s comfort and warmth I would appreciate more forefoot hold to truly drive my skis through variable snow. When the snow was soft and creamy in the backcountry the Backland Carbon’s were a delight to ski in and even more of a treat on the uptake given their crazy cuff rotation and ridiculously light weight.


Overall the Backland Carbon Boots are a nice upgrade to the previous version with improved warmth and weight, of which the latter, in my opinion, comes at the expense of superior fit and foothold—but others may disagree.