I had the opportunity to ski with Salomon’s new ultralight alpine touring boot at Winter OR a few months back, it’s called the S-Lab X-Alp. It may look more than a little familiar as the design is based on Arc’teryx’s Procline boot that they introduced the season before last. Rumour has it that both these boots were designed in unison as Amersport owns Salomon and Arc’Teryx, which only makes sense. While the Arc’teryx Procline boot is more focussed on ski mountaineering and climbing, Salomon has implemented some design tweaks to make the S-Lab X-Alp more of a downhill performer. The X-Alp’s shell has been reinforced around the cuff pivot to make it stronger and a lower density material is used in the soles to save on weight. Also, the Procline’s mid buckle has a cable which the X-alp does not and finally the Gaiter on the X-Alp does not have the zipper that is found on the Procline. 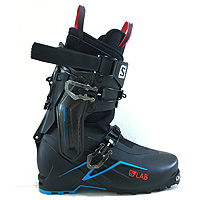 Give the following video overview a watch and if you want all the details straight from the source, then click here for that video:

The S-Lab X-Alp’s 2.3kg weight puts it in the same company as Atomic’s Backland Carbon and the Fischer Travers boots. All of these boots are in the 2.1 - 2.3kg range and could easily be used for skimo racing but are not the boots you want to pound the resort in, day to day. 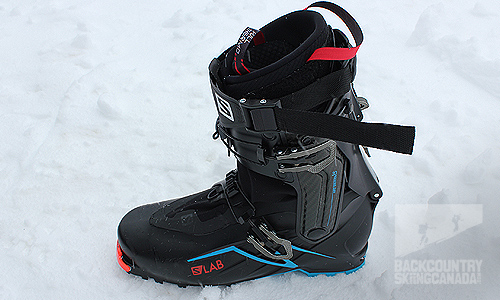 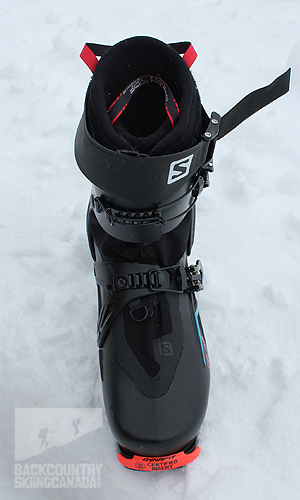 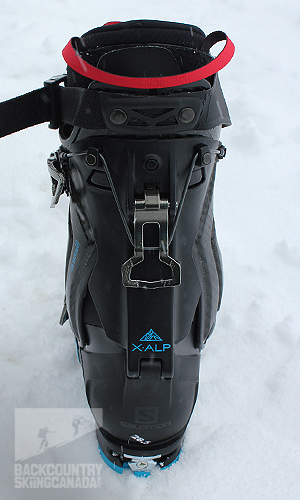 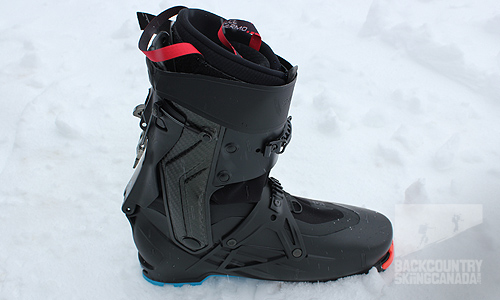 Fit
The Salomon S-Lab X-Alp Boots fit comfortable right out of the box and only required minimal boot fitting. The toe box has plenty of room, however, I did find the mid-sole narrow for my foot. My heel was seated well thanks to the forefoot buckle holding it down and to the back of the boot and ankle support was amazing even in walk mode given the beefy carbon spine. For an AT boot of this diminutive weight, I was pleasantly surprised.

Ski/walk mode
The real story with the S-Lab X-Alp Boots is the 3D rotating carbon cuff with 23 degrees internal and 12 degrees external lateral motion, allowing for ankle mobility and better ergonomics when skinning in steep off-camber or side hill terrain. With cuff rotation that’s off the charts and more degres than what my ankle is capable of flexing, you know this boot will climb like nothing else. Without a tongue, the design allows for complete freedom when you walk. The sensifit shell has a fairly thin wall with strategically placed reinforcement to makes the boots stiff, yet still light. This enhanced shell thickness is found around the cuff pivot to reduce the shell’s tendency to bulge as it flexes and help it ski stronger. 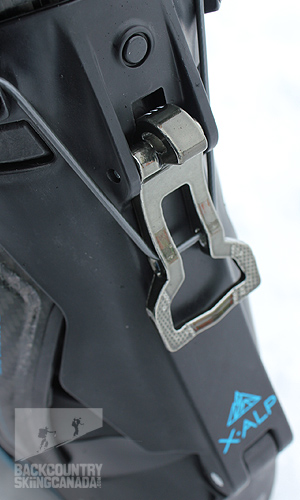 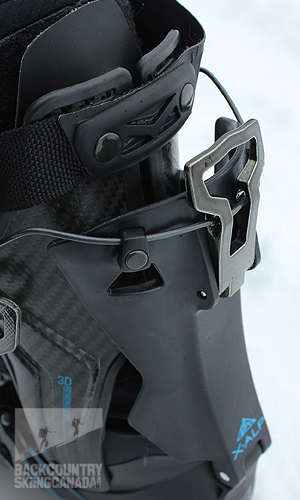 Buckles
There are two buckles on the S-Lab X-Alp and both have built in micro adjustment, the top buckle also sports a catch lever so that you can leave it undone as you tour without worrying about it flying open. The lower buckle is mounted on the side of the boot and may catch rocks or open when boot packing but so far I have not had an issue, perhaps this is why Arc’teryx opted for a cable system instead? 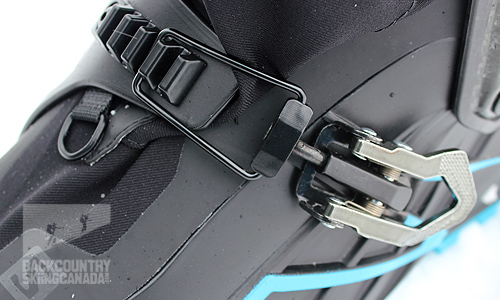 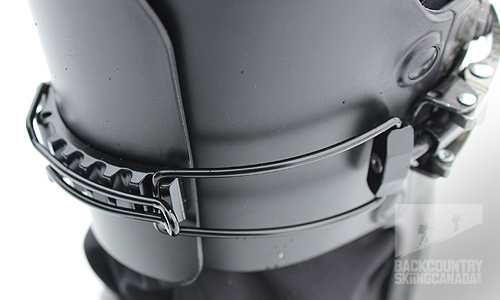 Liners
As with the Atomic Backland Carbon and the Fischer Travers liners, the Salomon S-Lab X-Alp Liners are fully thermoformable but they’re also thin, so you’ll notice on frigid days that your feet may get cold. I found them to be comfortable enough, however, I would suggest immediately replacing the foot beds as they provided no support at all. Just above the liner’s heel there is a softer foam to help with natural flex while in tour mode. Above this there is a much stiffer material which provides support around the calf so that the cuff of the boot can be cranked without causing any discomfort. The sole of the liner is stitched and not glued which provides more durability as glue will quickly fails after just a few liner removals in order to dry them out. 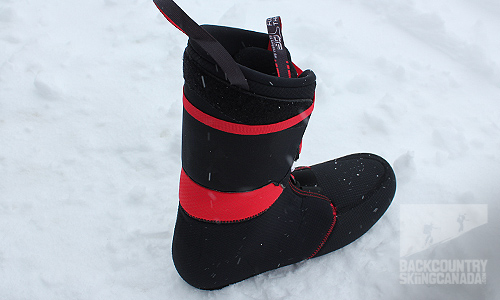 Gaiter
A built in gaiter on the S-Lab X-Alp Boots takes the place of a traditional tongue in order to keep snow and moisture out of the boots and your feet dry. While the gaiter works well and keeps things light it does provide more of a challenge to get the liners in and out of the boot. Arc’teryx’s Procline boot has an integrated zipper in the gaiter to help with this issue, but with some practice you’ll get the hang of it with the S-Lab X-Alp Boots. 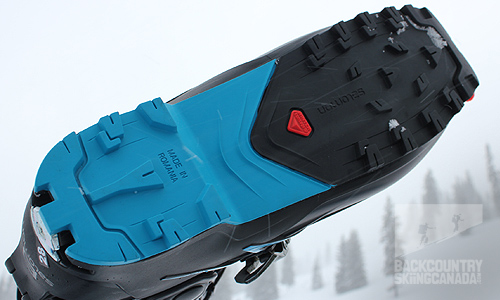 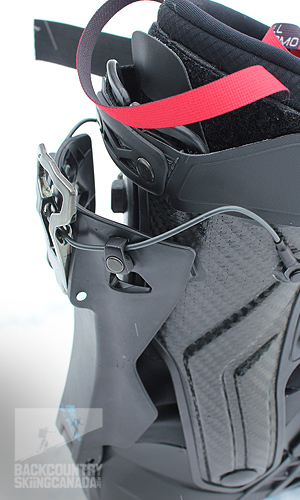 Power strap could be improved. 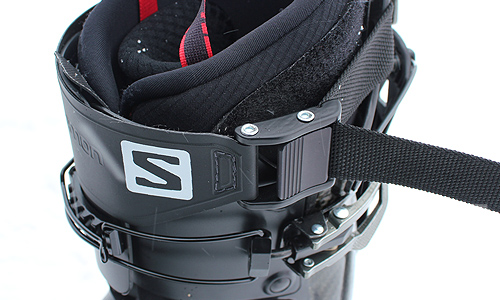 We’ve been waiting for some time for the release of Salomon’s new ultra light weight touring boot as it only made sense that if Arc’teryx had one, then the S-Lab X-Alp Boot was not far behind. Over the years Salomon has been making each iteration of their AT boots lighter and more touring focussed. If we look back at the progress from the Salomon Quest Max 120 BC Boots to the Salomon Quest Pro TR 110 Boots to the Salomon MTN Explore Boots, you can see each one is improving along the way but the S-Lab X-Alp Boot is a monumental leap forward.

After skiing the new S-Lab X-Alp Boots at Winter Outdoor Retailer in January I was not initially blow away by them. Having only skied two laps however, this was obviously a premature judgement on my part. Once a pair arrived here at Backcountry Skiing Canada HQ last month I quickly got them out into the mountains and put some serious vertical on them. The more I skied and climbed, the more I came to love them. While they are not meant for skiing the resort I found they could handle the hard pack groomers but where they really excelled was out of bounds in the powder and on the skin track. The range of motion is crazy huge and side hilling is no longer a chore thanks to the 3D rotating carbon cuff. It allows so much lateral flex that you can still keep your ski flat on the skin track and climb much more efficiently. I did find that I needed to keep the buckles latched, however, otherwise the S-Lab X-Alp was just too loose and sloppy on the skin track which would ultimately result in blisters forming.

On the down is where the S-Lab X-Alp Boots really impressed, after all, I knew they’d tour well given their flex and weight. Since there is no tongue the S-Lab X-Alp get’s its stiffness exclusively from the carbon cuff and while they're not a stiff as your traditional alpine touring boot, they're pretty respectable considering their weight. If I had to guess I'd say their flex rating would be in the neighbourhood of only about 100. Skiing steep powder lines however, was effortless once you adjusted to the increased flex, when things got wind blown and chossy is when you had to be on your game but even then they handled it all. At just over 3kg, the S-Lab X-Alp Boots could easily drive a 100+ cm fat ski. Impressive. Their progressive flex was forgiving and partly achieved by some lower shell bulge but nothing out of the ordinary.

Do be sure and get fitted for a pair of S-Lab X-Alp Boots in a ski shop before you buy as they fit much smaller than you’d think. I’m typically a 27.5 but in the S-Lab X-Alp Boots I needed a solid 28.5, so don’t be surprised if you jump up one full size.

The only concerns I have with the S-Lab X-Alp’s is the durability of the built in gaiters. They could potentially wear out faster than other parts of the boots as they tend to get pinched between the buckle and shell. I’ll be paying special attention to this area over the coming months of use.

Ideally if you can combine the S-Lab X-Alp Boots with Salomn’s new tech MTN binding then you’ve got yourself one super sweet, light weight touring set up. This is the set-up that I’ve been running to test the S-Lab X-Alp’s and I have to say it rocks.