Marker is no stranger to the alpine touring binding market with such successes as the Marker F10, Marker F12 and Maker Kinpin binding. While all of these bindings are fairly lightweight when compared to tech bindings, only the Kingpin can be considered a semi-tech binding but its alpine heel still makes it a heavyweight contender. With the runaway growth of backcountry skiing, the demand for lightweight tech bindings has increased and alpine touring frame bindings have become less popular. It was therefore only a matter of time before Marker used it’s decades of know-how and experience in the market place to create a light-weight full tech touring binding. Last winter Marker released their Alpinist 9 and 12 bindings in Courmayeur Italy and we were there to get the inside scoop. This winter we’ve been testing a pair of the Marker Alpinist 12 binding and the following review sums up our thoughts. 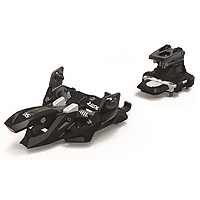 Watch below for an overview of the Marker Alpinist 12 Bindings: 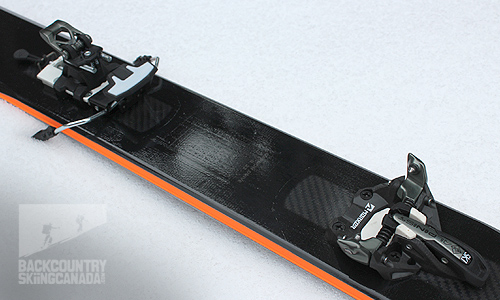 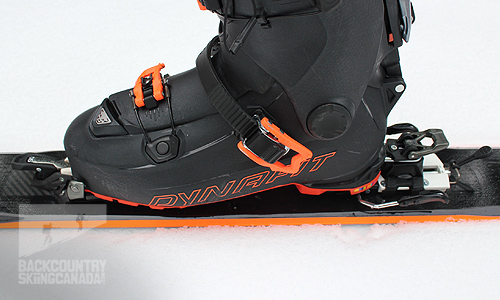 Marker’s claimed DIN setting for the Alpinist is for lateral release only, the U-spring controls the vertical release and is fixed. Marker offers three alternatives to the stock U-spring that comes with each binding, these are Soft (DIN 5), Medium (DIN 7.5) and Hard (DIN 10.5). These springs can easily be swapped out with an Allen Key at the back of the binding’s heel unit.

Marker’s head of Research & Development talks about the new Alpinist Binding in this video:

Marker strived to facilitate stepping into the Alpinist’s as easy as possible and decided to do so without the use of bumpers on the tow unit. Instead they optimized the distance of the pins to be just right for the average AT boot and ensured the clamping jaws to shut with authority so that they would self centre on the tech fittings in your boots. The double springs in the toe combined with a higher pivot point of 3° for the arms creates a much stronger closure force than most tech bindings. Keeping the heel of your boot low and level with the ski helps improve accuracy and stepping in time and time again should be fairly easy 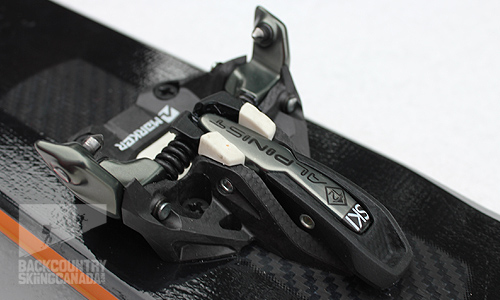 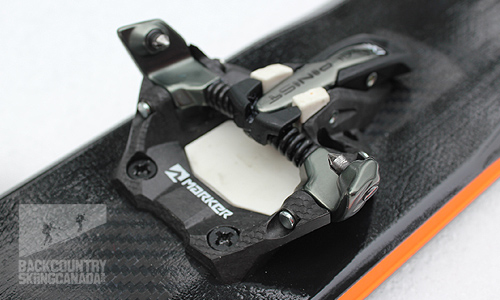 Toe piece in lockout mode and ready to shred. 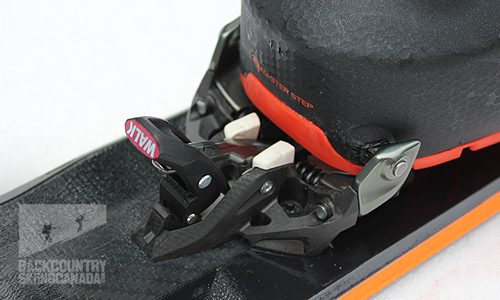 The heel unit on the Alpinist has 4mm of dynamic length compensation so the back of your boots actually kiss the front of the Alpinist heel units. This 4mm tolerance helps to increase the consistency of any release and improves the connection between boot and ski. There is also 15mm of linear adjustment so you can swap out boots with different sole lengths if required. With a neutral ramp angle the Alpinists are easy to walk in on flat ground and with three riser positions (including flat) you’ll have a few options when climbing. Removable brakes round things out and also add 90g to the binding’s base weight of 245g (per binding). Brakes are available in 90, 105, and 115mm widths and are optional but installing them after mounting the Alpinists entails removing the entire heel unit. In order to retract the brakes for ski mode you need to push down on the brake’s anti friction platform first and then push in the wire bail at the rear of the heel piece. Pulling the bail out towards the back of the ski disengages the brake. 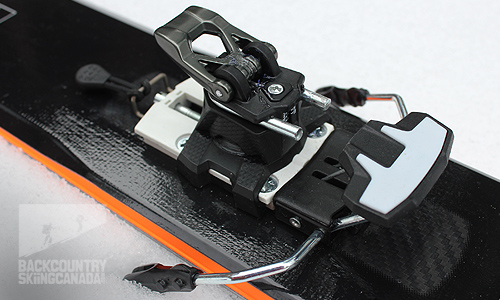 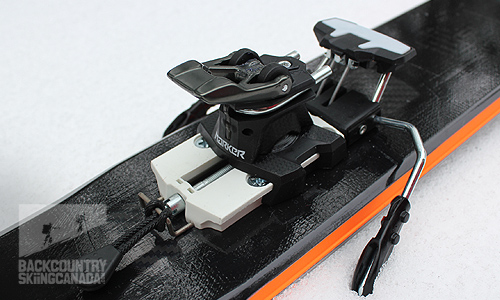 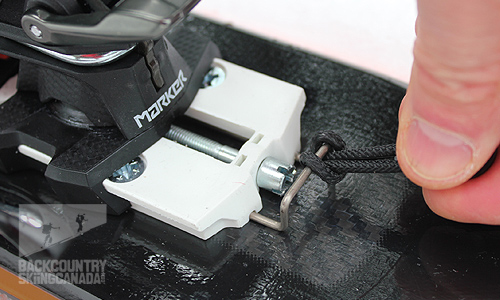 For uphill travel, the 5° riser is easy to activate with a pole without having to rotate the heel of the binding. The riser simply flips forward and covers the tech pins and you’re ready to walk. Should you want a 0° or the ‘high heels’ setting of 9° then you will have to manually rotate the heel piece with your hand, sorry no short cuts here. 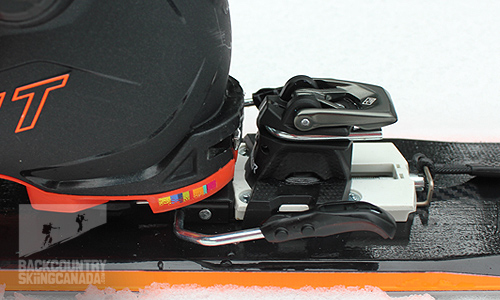 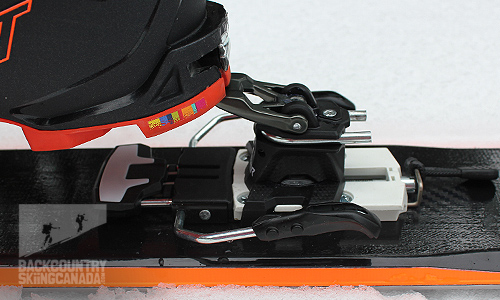 Check out how the Marker Alpinist Binding works in Courmayeur Italy at its unveiling:

Full extension on the toe piece without an accidental release, always a good thing. 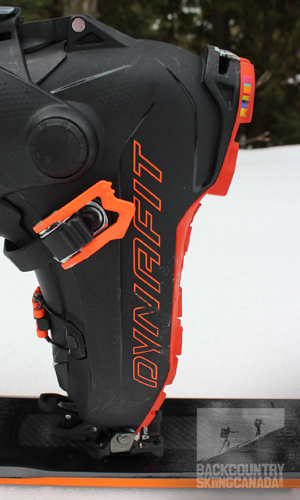 I applaud Marker for joining the tech binding revolution, their Alpinist 12 is a solid entry and compliments their Kingpin and ageing F10 and 12 bindings. Overall, the Alpinists feel very secure and solid which is surprising due to the lack of metal in their construction. Marker has used a carbon reinforced plastic for both the toe and heel’s chassis trims some of the weight and enabling the Alpinist to be a true climbing binding. The Alpinists transfer power to the ski quite effectively and helped to dampen excessive vibrations and smooth things out when compared to other light tech bindings. I think the amount of carbon fibre-reinforced polyamide used in the Alpinist’s instead of aluminum is the reason for this.

The Alpinist’s most aggressive riser provides an increased ramp angle of just 9° which some may feel is not enough. This is a fair criticism as 9° is about the same angle as the middle riser on the Hagan Core 12 and Salomon MTN bindings. However, if you need more than 9° your skin track is perhaps simply too steep to begin with, I’m sure most Europeans would agree. In my testing I found that I would use the flat and 9° riser exclusively and forego the 5° setting and while this entails turning the heel to access these setting, I didn’t mind and just got in the habit of doing this at each and every transition.

One downside of tech bindings that use U-springs is that they prematurely wear out the pin inserts in touring boots and therefore change the release characteristics over time. This process takes significant time and the weight savings achieved with a U-spring design is pretty advantageous. As well the U-spring and tech fittings in your boots can easily be replaced and are relatively inexpensive. Going über light does have it’s downside but it’s minimal.

While I’m a huge fan of the Alpinist binding design, the optional brakes are definitely their Achilles' heel. The brake’s integration appears to be a bit of an after-thought, not only do the brake arms provide minimal stopping power due to their length but engaging and storing the brakes entail using a very small wire bail that is hard to operate with gloves on and is in danger of icing up. To retract the brakes, you’ll need to first push them down into place and then push in the wire bail at the rear of the heel piece. Pulling the bail out towards the back of the ski disengages the brake. While this process works, it’s not very elegant for such a high end AT binding.

The only other note of concern is the minimal gap between your boots and the heel piece of the Alpinist. While not an issue in most circumstances, you may encounter friction when stepping into the Alpinist if the ski is flexed a minor amount, something to take note of.

The lateral release of the Alpinist is adjustable, however, the vertical release is provided solely by the U-shaped spring. If safety is of primary concern and you want to be able to control both the vertical and lateral release values then you may want to look at the Hagan Core 12 binding but you’ll be incurring a weight and financial penalty for this ability.

One of the biggest benefits of the Alpinist 12 over all the other competitors has to be the significantly cheaper price point. Competing tech bindings such as the Hagan Core Binding cost an additional $345 while the Black Diamond Helio 200’s $200 more expensive.

Overall, the Marker Alpinist 12 is a lightweight, feature-rich, touring binding that provides good value along with confidence-inspiring skiing and easy climbing, poor brake design aside, this is a serious tech binding that demands your consideration.