The Elan Ripstick becomes the first Ski to ever win our prestigious Gear of the Year Award twice, the first time being the women's Ripstick 102's. This new 106 Ripstick has been completely redesigned and better than ever, which is why we had to crown it for a second time. Read the review and see why this ski is so deserving.

Elan hit it out of the park with their current Ripstick line of skis which use a unique Amphibio profile. This is simply a cambered inside edge for grip and stability and a rockered outside edge for easier turning. They combine this with their TNT Technology which is the combination of Vapor Tip Inserts and a Tubelite Woodcore allowed the skis to absorb vibrations and yet still be lightweight and responsive. The Ripsticks are a ski that can truly do it all, for proof just read our review of the Ripstick 106 Skis, 106 Black Edition Skis and the women’s Ripstick 102 W Skis. As you’ll see we loved them all which is why when at the 2020 Winter Outdoor Retailer Show Elan debuted an entirely new line of Ripstick Skis we were a little worried that they might mess with a good thing. To ensure that this is not the case we had Elan ship us a pair of men’s Ripstick 106 and Women’s 102 Skis in advance of retail availability. In this review we’ll look at what’s new in the Ripstick 106 skis and our review of the women’s Ripstick 102’s will be forthcoming. 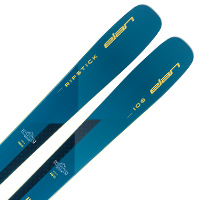 Just like their performance, the look of the new Ripsick 106's has gotten even better. 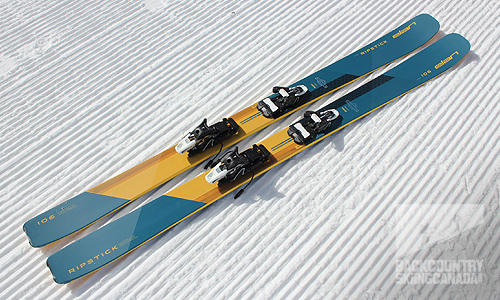 Rather than repeat all the features of the Ripstick 106 Skis, have a read through my previous reviews of either the original Ripstick 106 or Black Edition 106 Skis—once you’ve done that you'll be more prepared to learn what Elan changed with these 2020/21 Ripstick 106 Skis. 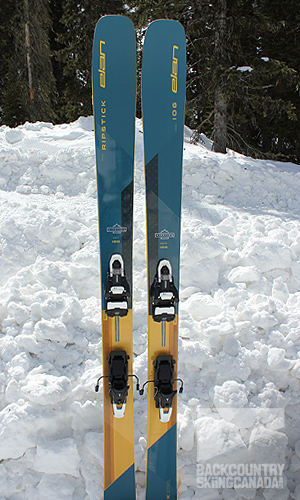 At first glance thing look pretty similar to the previous Ripsticks, only an updated (and rather appealing) top sheet design is obvious, but when you look a little closer you can see the new carbon layer construction on the inside edge of the skis. This is Elan’s completely new Truline Technology construction which uses a strategically placed carbon layer on the inside edge of the ski to amplify the ski’s asymmetrical profile, power and stability while turning the ski on that inside edge. 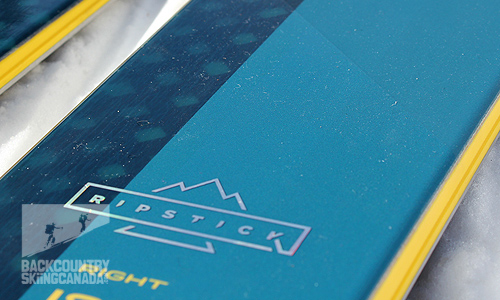 Elan has also updated the tip and tail shape on all the new Ripstick skis with slightly fatter tips (by about 3mm on the 106's) with a more modernized shape for added float and performance. The tails are slightly more curved and a few millimetres thinner overall (2mm on the 106's to be exact) which enable you to scrub speed and get out of tight spaces. In addition to all this, the new Ripstick 106 skis are only slightly heavier than the previous version. 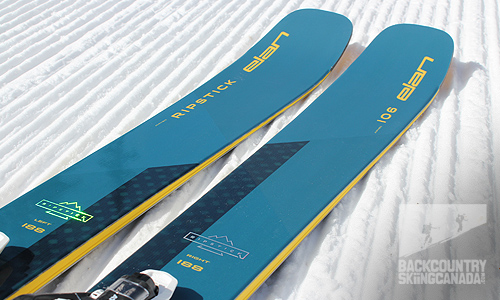 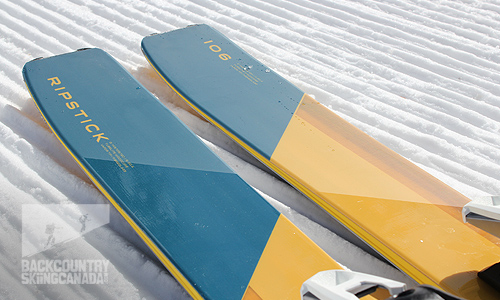 The camber underfoot remains in order to keep the skis playful and responsive. 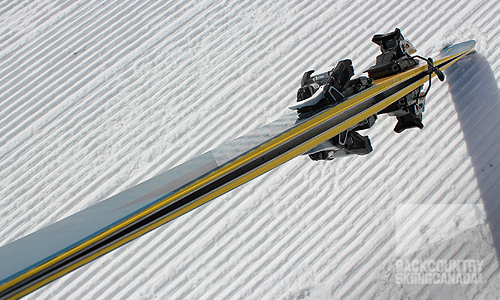 The tail notch also made the cut and is found on the new Ripstick skis as well as it is essential in centring climbing skins on the tail and preventing them from falling off. 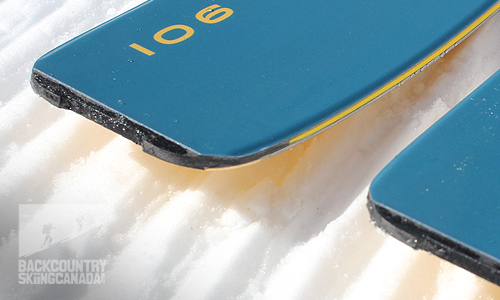 The new and improved Ripstick Skis will be available in fall 2020 and will come in an 88, 96, and 116 version for men as well as women’s 88W, 94W, and 102W widths. You won’t be able to miss them at your local ski shop as the hot new top sheet designs will surely drawing you in for a closer look. 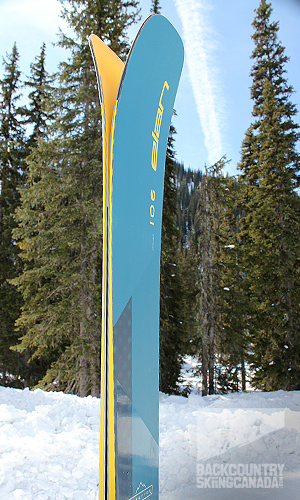 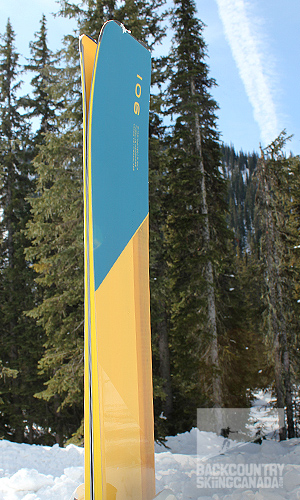 We mounted the Elan Ripsticks with a pair of Atomic Shift MNC 13 bindings which makes for an unbeatable in-bounds and out-of-bounds ski set-up. 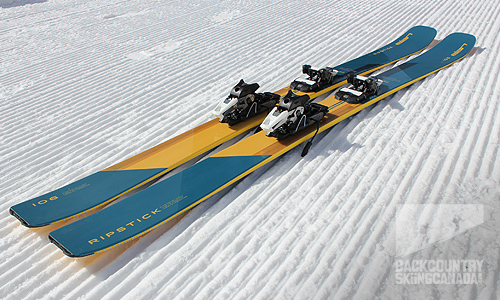 Already being a huge fan on the Ripstick line of skis and the fact that the 106’s are one of the top three all-time great quiver of one skis (in my opinion) it’s no wonder that I wanted to test out these new Ripstick 106’s. Sceptical that they could improve on an already solid performing ski, I got to work testing the new 2020/21 Ripstick 106’s in all sorts of snow conditions and terrain.

Elan thankfully maintained the previous 106’s personality of a fun, all-round ski that carves well on groomers and floats even better in pow. What they improved upon was the Ripstick 106’s ability to really rail on groomers and charge hard through variable and chopped up snow. The previous version could carve but these new Ripstick 106’s can absolutely rail. The strategically placed carbon on the ski's inside edges ensures that they stick to the snow through the length of the turn and provide not only a stable ride but one full of power. There is no need to temper the throttle on these skis, despite their fat dimensions they love to rip and carve. While the previous Ripstick 106’s are great at carving turns they simple don’t grip the snow and engulf the entire turn with power the way these new Ripstick 106’s do.

The new tip shape is a little fatter than the previous Ripstick 106’s and when combined with the new Amphibio Carbon Line Technology construction you can really feel how the shovel grabs the snow to initiate the turn and leads the way, driving the ski into to the turn and through it, not to mention its ability to bust through crud and chunder like nobodies business. The increased power of this ski is evident in every turn and how it drives with the fat tips right through to the tails, letting nothing stand in its way.

While redesigning the tail shape and shaving off a few millimetres Elan also kept the tail notches to better fix skins to—their fat square nose, however, may be problematic for some skins with tip loops need to go around the ski tip, such as Black Diamond’s Ascention skins. On the other hand, the G3’s Minimist and Alpinist Skins will work well with no problems.

Elan also upped the ante on the Ripstick’s top sheet designs, they’ve combined complementary colour palettes and simple geometric shapes that will appeal to both men and women and really help move these skis at retail (just in case no one cares how well they really do ski).

If you are looking for a single ski to rip the resort and lap the backcountry then the new Ripstick 106’s for the 2020/21 season are a must-try. Even though they are a little heavy for us older guys who like to spend long days in the backcountry they are a one quiver ski that does it all with ease, and if you want something lighter then look to Elan’s Ibex line.