Atomic and Salomon are both owned by parent company Amer Sports which is why these two brands share technology and products with one another and why you’ll often see the same product offered by both brands, such as the Shift MNC 13 Bindings. This binding was released by both Atomic and Salomon last season to huge acclaim, so much so that it was next to impossible to get our hands on a pair to review. The reason for all this pent up demand is that the Shift MNC 13’s are a first of its kind two-in-one binding. They are a tech touring binding on the way up and a full alpine binding on the down. I say full alpine binding because they conform to the TUV Certification for alpine binding standards, making it the first non-frame binding to do so. The Shift MNC 13 Binding was seven years in development and is the worlds first binding with full touring and freeride capabilities. 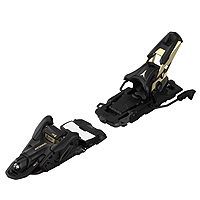 Check out the Shift MNC 13 Bindings in this overview video to get a better idea of how it works and what the features are:

The predecessor to the Salomon/Atomic Shift Binding was the Guardian Binding, but this was a heavier frame touring binding that had no compatibility with tech boots. On the other end of the spectrum are the Salomon/Atomic MTN Bindings which are a super light weight, full tech touring binding. And now with the Shift this gap has finally been bridged and we have a hybrid solution which brings together the best of both worlds and combines it to form the Shift MNC 13 Binding. 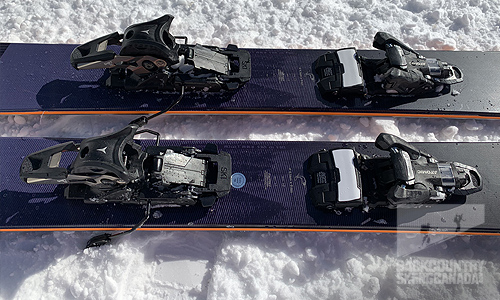 The Shift’s toe piece is where most of the magic happens, it’s a dual-mode toe piece that converts from an alpine toe to a tech toe for touring. Toe Height Adjustment ensures that the XL Wings fully envelop your boot for a firm and aggressive hold. With 47mm of lateral elasticity and a Sliding Toe Pedal, release is assured when you need it most and pre-release is eliminated. Switching over to touring mode is achieved in three easy steps: 1. Pull back on the lever between the toe wings to open tech arms. 2. Depress the front lever to widen arms to step in. 3. Pull up and back on the lever to lock the arms securely for skinning. 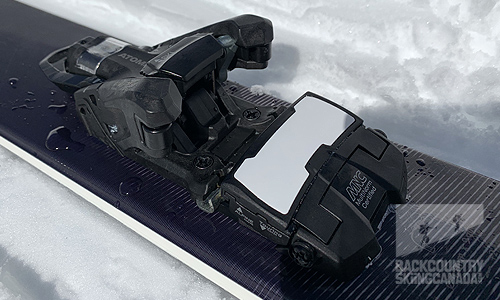 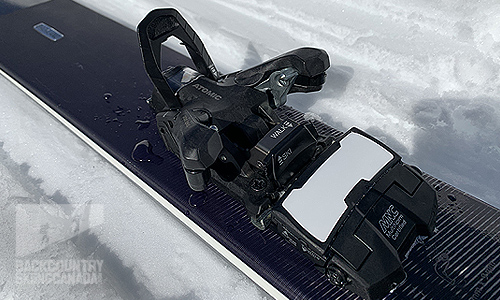 The Shift’s heel piece offers 9 mm of elasticity and employs Freeski Brakes for maximum stopping power should the ski release. The brake’s retracted position is close to the heel piece so they avoid catching on one another and stay out of the way. To prepare the heel for touring simply pull back on the brake pad and step in firmly to stow the brakes. In Tour Mode, there is one climbing aid which offers a 10° incline to help make climbing steep up-tracks more efficient. 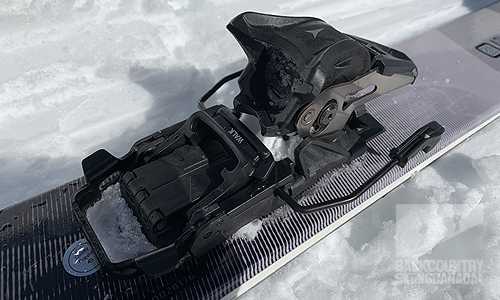 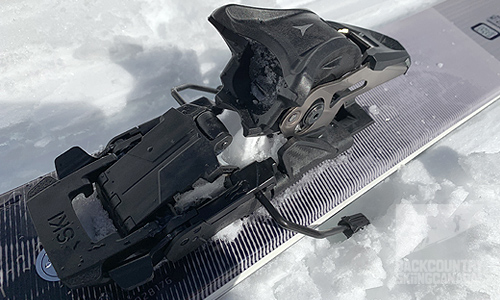 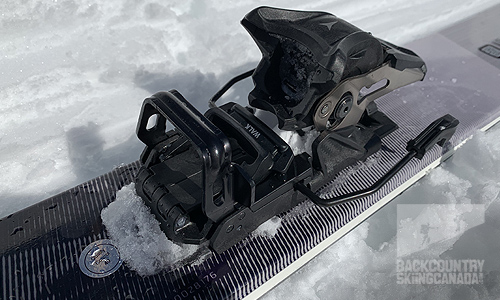 The Multi-Norm Certification (MNC) means that the Shift Bindings accept all ‘normed’ boots which are essentially any boot with full-sized toe and heel lugs (ISO 5355 Alpine and ISO 9523 Touring) and includes those with Walk To Ride (WTR) and Grip Walk soles. The Shift Bindings are not compatible with the Dynafit Hoji and TLT series of boots, nor the Atomic Backland, Salomon X-Alp and Arc'teryx Procline Boots—all of which have shortened or non-existent toe and heel lugs. Boots with tech toe fittings are also required for uphill touring mode in the Shift Bindings. 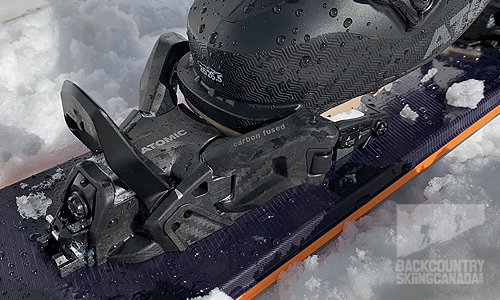 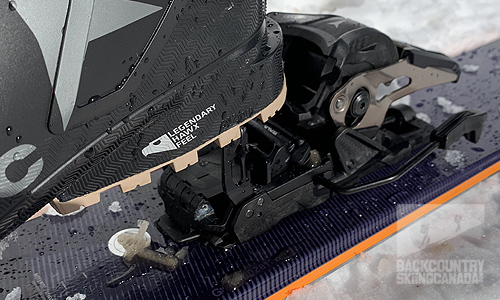 The Shift’s Low Profile Chassis means that it has a minimal stand height which provides a better connection to the terrain underfoot while maximizing power transmission to the ski, thanks in part to their Oversized Platform design which is able to drive fatter skis with increased lateral power. The Shift’s Carbon-Infused PA Construction keeps it light yet strong and the 30mm adjustment range means it can easily accommodate longer and shorter boot sole length without having to remount the bindings. 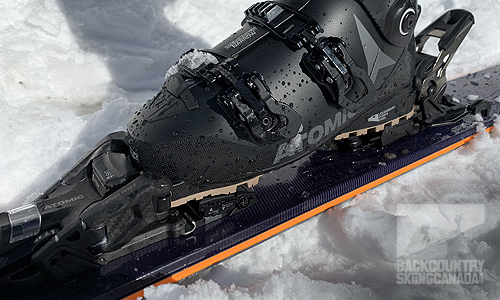 I’ve been testing the Shift Bindings for over a six weeks now both in bounds and out since they are designed for resort and backcountry use equally. I also had the opportunity to attend an Atomic Media Event called ‘Next Year Now 2020’ put on by Denny Ink PR at Solitude Resort in the Wasatch Mountains near Salt Lake City Utah. While there, we skied the Shift MNC 13 Binding mounted on the Atomic Backland 107 skis. We crushed resort laps in bounds at Solitude Mountain Resort one day and then on day two skied out of bounds traversing from Solitude to Alta and back again via Brighton Ski Resort ending up back at Solitude. This, along with my own ski touring mission around Whitewater Ski Resort provided exposure to all kinds of snow conditions and terrain which made for optimal testing.

Having skied on the Marker KingPin Bindings for the past five seasons I am well versed with a tech binding that can not only tour but also takes beating skiing inbounds the majority of the time. The big difference between Kingpin Bindings and the Shift MNC 13 Binding is that the Shifts have a full toe and heel alpine release which makes their overall safety superior. The Shift MNC 13 Binding is, however, 331g heavier than the Kingpins and 500g heavier than the new Kingpins M-Werks versions so there is that to consider if you are comparing the two. The Shifts added safety and functionality has to come with additional weight, unfortunately, but this is minimal in the overall scheme of things. Like the Kingpins, the Shift MNC 13 Binding skied flawless and instilled confidence in every turn. You’d be excused if you forgot that the Shifts were, in fact, touring bindings as well. Their solid construction and responsiveness on the down were comparable to the burliest of alpine bindings so in my mind it was easy to justify their additional weight over that of a pure tech binding which is typically half as heavy.

While switching over to tour mode from ski mode on the Shift bindings is not intuitive for the newcomer, it doesn’t take long to learn the sequence of events required, but there is definitely a learning curve for most. Once the Shift’s toe piece is set to tour mode the integration of a tech compatible boot can be a little more challenging that other tech bindings out there. You have to press down on the Shift’s toe lever to hold open the toe wings as you simultaneously step in at the same time. By releasing the toe lever the wings clamp down with force but the combination of these tasks can be daunting for most without prior practice. Once locked in at the toe, the heel set up is much simpler as it is just a lever flip and stomp of your boot to lock the brakes away in touring mode. After this, you are ready to walk. I found that the Shifts provided a fluid full-range touring motion that is very natural to move in, something you can only get with a non-frame, true tech binding.

When you find the up-track angle getting steeper, the Shift’s climbing aid is easy to engage with the handle of your ski pole. It provides a 10° angle which is a huge climbing advantage on steep skin tracks. While Atomic states that there are two climbing risers, there is in fact only one. The other is the neutral 2° ramp angle of the binding itself—which feels like 0°. While not ideal, this works but a secondary riser in the 5° range would be very helpful for low angle trail braking and climbing. This, however, would increase the complexity of the Shifts—something that is definitely not needed.

One thing that I discovered on the up track my first few times out was that you need to pull the toe lever all the way up, firmly, so that it clicks into the lock position. The first angled position does not mean that the toe is locked, it isn’t. If this lever isn’t vertical then you have to pull back on it harder, otherwise, your toe will release and you’ll have to start all over.

If I had to pick the weak point of the Shift MNC 13 Binding it would have to be the transition from walk to ski and back again. It’s not that straight forward for a newcomer and requires that you remove your skis so it also takes additional time when compared to traditional tech bindings. It isn’t that dissimilar to frame touring bindings of the past like the Marker F10 and F12’s and is certainly not a deal-breaker since the dual functionality of the Shift MNC’s is well worth the effort.

Overall, the weight and initial learning curve of the Atomic Shift MNC 13 Binding can seem like larger obstacles than they really are but with a little practice, the transitions become second nature (like anything). And the weight, well, it’s no longer that obvious after you realize how versatile these backcountry/resort bindings are. They really are the best of both worlds.