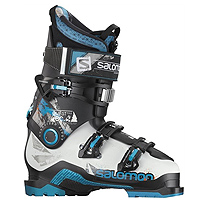 Innovation never stands still and this is surely true of Salomon’s never-ending improvements to their boot line up. Last season we reviewed the Salomon Quest Max 120 alpine touring boot and new for the 2013/2014 ski season is the Salomon Quest Max BC 120 or ‘backcountry boot’ which sports many new features and benefits. The biggest benefit of the Quest Max BC 120 over last year’s Quest Max 120 is that the new “BC” model is 448 grams lighter per size 28 boot (according to our scales). This is based on the BC version weighing in at 2030g per boot versus 2478g for the original Quest Max 120.

So how exactly did Salomon achieve this 900-gram savings per pair? Most of the savings come from the new Pebax PU lower shell as Pebax is inherently lighter while still being strong, hence its prevalence throughout the alpine touring boot market. The rest of the grams were shaved off of the liner itself. While Salomon did not sacrifice any quality or comfort in the liner department they did save 133 grams overall. The new liner has a lot less plastic in it and small things like the lace’s pull tab have been reduced down to nothing. In addition to the reduced weight, I found the new liner much more comfortable with a built-in flex zone which allows the liner to bend when in walk mode. The padding material is adequate enough to keep your feet nice and warm and eliminates any pressure points that could be created by the shell. Salomon kept the thermoform-able option with the Quest Max BC 120 liner so you are able to ratchet up the comfort, even more, should they not fit well enough out of the box. Magnesium buckles are the final piece of the puzzle which enable the new Quest Max BC 120 Boot to come in at almost 20% lighter - a great benefit in my books.

As you will no doubt notice in the photos that follow, we did not get to review the Salomon Quest Max BC 120 Boots with interchangeable bi-material toe and heel pieces that come with DIN touring soles (aka tech fitting) but we trust that these would be of the same quality as those made for the Salomon Quest Max 120 Boots.

If your time is limited or you are adverse to reading then have a gander of the video below for the concise video version of this review: 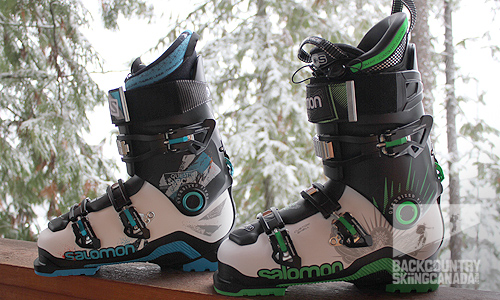 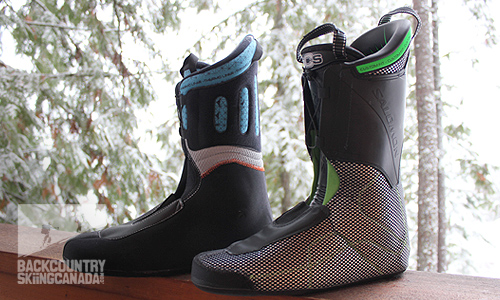 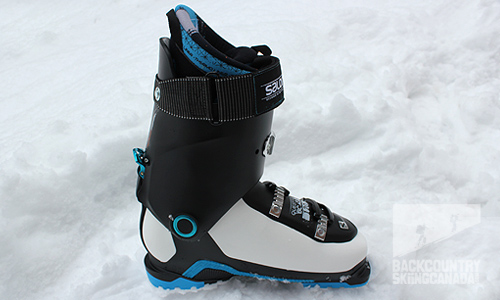 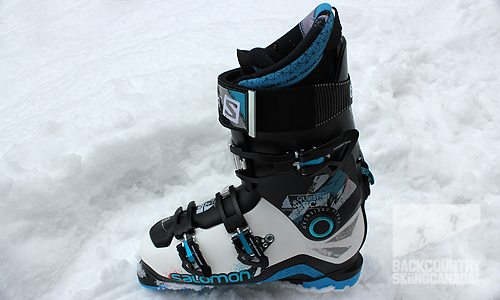 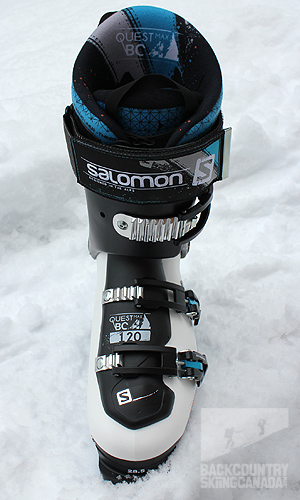 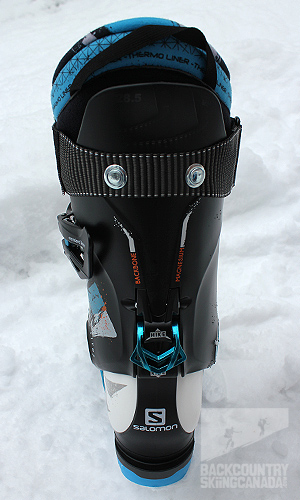 Hike and Ride lever is large enough for gloved hands and yet streamlined enough that it will not get in the way. 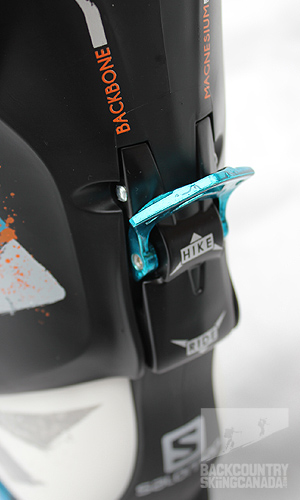 Three large Magnesium buckles are easy to use, strong, relatively flat and out of the way. 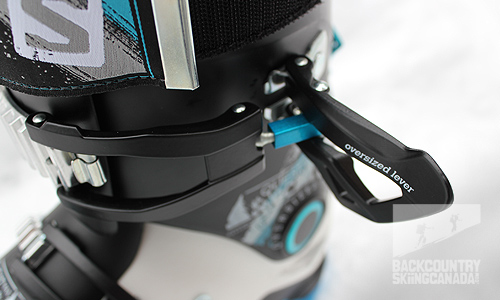 The middle buckle has a bracket that allows for some adjustability should you find that its position is not optimal over your instep which could help relieve uncomfortable pressure in this location. 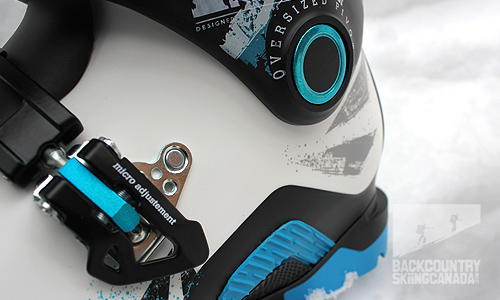 The wrap around sole is a great feature and one that will provide additional traction on rocky summit bids and ski mountaineering trips for those Greg Hill wannabes. 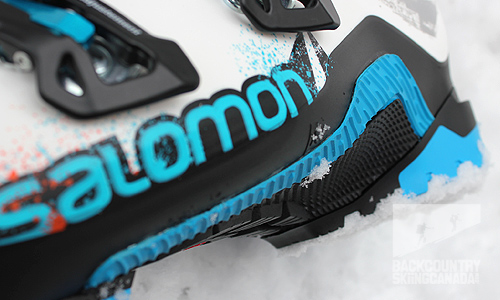 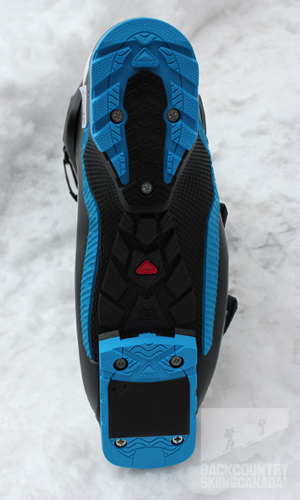 I give Salomon a virtual ‘high five’ for their big strides in weight savings with the new Quest Max BC 120 Boots. When compared to the non ‘BC’ or ‘Backcountry’ version of the Quest Max 120 these boots are far superior for backcountry skiers. I am not saying that these boots would appeal to everyone however. Likely Greg Hill did not have enough time at his new position with Salomon to make the Salomon Quest Max BC 120 Boot a true multi-day, pseudo-ski-mo, ultra light weight alpine touring boot. For this I am sure we will have to wait just a little bit longer? For now the Salomon Quest Max BC 120 Boot fills a nice void that seems to be gaining popularity with that segment of the ‘new’ backcountry skiing market that is more youthful than I and looking for a ski boot that performs like a downhill boot at the resort and a backcountry boot once out of bounds. This is where the Quest Max BC 120 Boot shines. At 4060 grams per size 28 pair it’s a great weight for a ski boot that can do it all, but again, maybe not light enough to make more serious backcountry skiers take notice.

There are a few areas where the Quest Max BC 120 Boots could still be improved, namely the cuff rotation. At approximately 10 degrees in either direction of vertical it’s not a huge amount and a full day on the skin track or those who prefer longer strides may find this limiting. The top buckle retention system while in walk mode could also use some love as it feels more like an after thought. While still talking buckles, I found that on both the Salomon Quest Max 120 and BC models, the top buckle was a challenge to buckle up as it would not easily reach across the shell with out first compressing the shell itself, so it needed to be tightened in small increments. It would be nice to see the buckle have an extended reach, which could be achieved by moving the pivot point to increase the length of the buckle and its effective reach. On the fit side of things, straight out of the box the Quest Max BC 120 Boots were not effective in anchoring my heel. I had to swap out the stock foot beds as they provided no support for the arch of my foot and since the Quest Max BC 120 is a high volume boot I needed my SIDAS moulded foot beds to take up the additional room. After some boot fitting love from our local wizard at ROAM here in Nelson, my feet found their happy place and testing could begin.

On the plus side of things there is much to talk about:
- The forward flex is smooth and progressive
- Wrap around grippy sole for climbing on rocks
- Heat mouldable liners are super warm even on a -24°C test day
- Liners are comfortable and flex with the boot
- A much lighter boot but no compromise on downhill performance or comfort
- Large 24mm pivot enables you to effectively drive larger skis since it provides great lateral stiffness
- Over sized power-strap cinches everything ultra tight

Hucksters and resort rats looking to go beyond the boundaries will rejoice at the dual resort/backcountry capabilities of the Salomon Quest Max BC 120 Boots. Lighter and leaner but still just as mean, they’ll tackle what you can throw at them,… and tour as well! 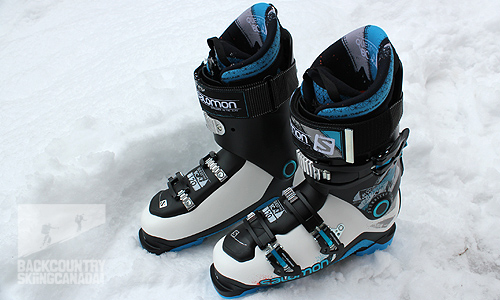