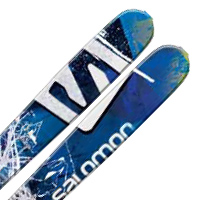 Salomon has been enjoying great success with its Rocker line of skis and we can easily understand why as we have been skiing the Salomon Rocker 2 108 since early last season and love them.

New for fall 2013 Salomon has developed the Quest line of products which includes: Q-skis as well as Quest Boots, Quest Packs and Quest Motion Fit Jacket and Pants. Here at BackcountrySkiingCanada.com we have been skiing on two versions of the Q skis for several months now (the Q-98s and the Q-105s) as Salomon was nice enough to send them out to us way back in February of last winter along with a pre-production version of their new Quest Motion Fit Jacket and Pants. The Q-98 skis are the little brothers to Salomon's Q-105 Skis, the number in the moniker being relative to the ski width underfoot. We're going to focus this review squarely on the Salomon Q-98 skis and even though they are part of the Quest family they will forever be known as the Q-98 skis so don't try and put a "uest" after that big "Q".

So, how do the Q-98s skis differ from skis in the Salomon Rocker 2 line up? The answer is in the name; the Rocker 2 skis are a full rocker ski, the Q-98s aren't. Specifically, the Q-98s utilize "Utility Rocker", which is a modified twin rocker that enables more edge contact on the snow for improved stability. With this design, the Q-98s offer up 60% contact with the snow when flat and 85% contact when on edge. The Rocker 2 skis by comparison offer up 40% and 80% respectively. The Q-98 skis are designed as a "one ski quiver" (many have tried but few have succeeded in this realm before). The Salomon Rocker 2 skis, on the other hand, are designed more for deep pow and variable snow conditions. Despite the difference in the rocker style, the Q-98s still share the 5 point side cut and Honeycomb & ABS tip and tails with the Rocker 2 skis.

So far the reviews for the Q-skis have been positive and Salomon's big mountain athlete Cody Townsend was quoted saying "Q-Line skis are the most versatile freeride skis I’ve ever tried". He goes on to say “As much as I love skis with twin-rocker, I wanted to help create a ski that is more approachable and has more power and stability for variable conditions and hard snow as well". I couldn't agree with you more Cody!

Salomon makes the Q-Line of skis with a semi-sandwich construction and a full wood core to provide a stable platform. They offer the Q-line up in a broad range of widths which include the Q-90, Q-98, Q-105 and the Q-115, for the ladies they sell the women’s Q-88 Lux, Q-96 Lumen and Q-106 Stella

I touched on a few technologies that are inherent to the already popular Salomon Rocker 2 skis and are also found in the Salomon Q-98 skis but lets delve a little deeper into each to see why they are important and how they add up to allow this Q-98 ski to be versatile and easy to control in various conditions while still being quite lively and manoeuvrable. 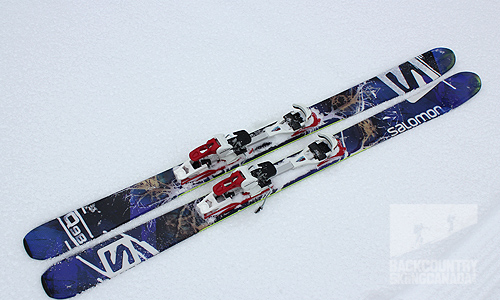 What Salomon calls their "Utility Rocker" is the combination of an early rise tip, camber under foot and a subtle tail rise. The tip rise is fairly generous and keeps the tip floating in powder and chop while the traditional camber underfoot allows the ski to carve on groomers and hard pack. The tail rise is minimal so it finishes the turn nicely and provides more control than a twin-rocker ski. This more traditional shape provides a solid platform with the early rise giving you the flotation you need for powder days in the backcountry. 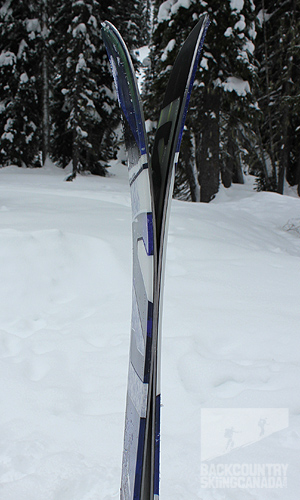 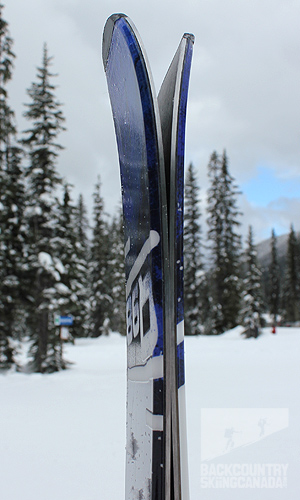 Salomon's 5 point sidecut is used not only on the entire Q line of skis but also the Rocker 2 line up. It is so named for the 5 points along the ski’s shape: narrow at the tip, wide towards the middle, narrow under foot, wide again towards the back and then finally narrow at the tail. Count them all up and you get the five points. The real magic with the 5 point side cut happens because the widest point of the ski is pulled back from the tip and tail more than other skis of similar shape. This design eliminates any chance of "hooking" the ski in chop and on groomers, which we have experienced with other skis of similar design. 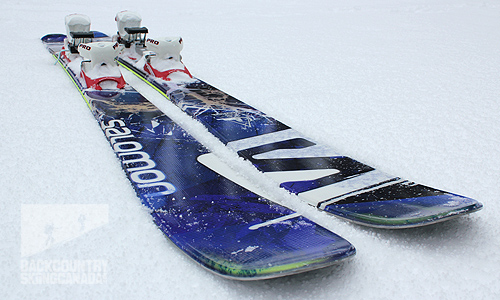 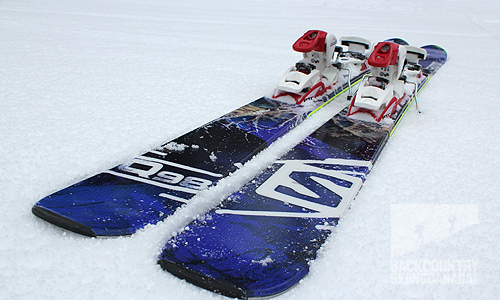 Anytime you have an early rise tip or tail you inevitably get ski chatter. It only makes sense, take the ski extremities off the snow and vibrations take over and you get chatter. Chatter reduces control and vibrations can be amplified. To reduce vibrations and chatter, Salomon uses a honeycomb structure (called Koroyd) and ABS(what does this stand for?) in the tip and tail of the ski. This design also reduces the weight and, therefore the inertia to swing which makes the Salomon Q-98s more maneuverable and gives the skier more control than skis without these technologies. The Solomon Koroyd structure is touted as being superior to traditional honeycomb structures as rather than being glued together, the Koroyd cores (think thousands of small extruded tubes or cylinders) are thermally welded. This eliminates weak points found in traditional hexagon core structures. Koroyd is very light weight and provides dampening to the tip and tail of the Q-98 skis which you will notice on groomers and hard pack snow conditions. 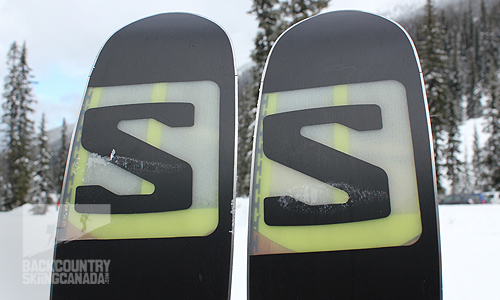 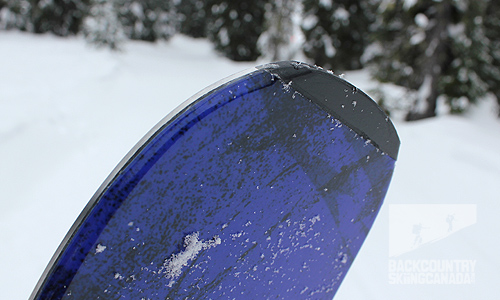 We mounted the Salomon Q-98 skis with the Fritschi Diamir Freeride Pro bindings which have a DIN range of 4-12 and weigh in at 2.2kg or 4lb 8oz. With four height adjustments at 0°, 3°, 9° or 13° they provide lots of choice while climbing. The new wider base plates allow for better, more even transmission of power across today’s fatter skis. The Freeride incorporates 'Gliding Technology' which places the pivot point on the toe piece behind the toe of your boot and combined with the moving baseplate allows you to raise your foot until it is completely perpendicular to the ski which results in a more natural stride when skinning. The price point for the Fritschi Diamir Freeride Pro binding is $499.95 US. If you are looking for a durable all-around-resort/ski-touring binding then consider the Salomon Guardian 16 AT binding which we have reivewed over here.

The Salomon Q-98 is a ski that appears to do it all. It has good turn initiation and finish, pops you out of the turn so you can initiate another and generally just loves resort groomers. The wide shovel (at 134mm) busts through crud and has no chatter even though the early rise is substantial. In powder all the dimensions work well, however, some extra girth underfoot would help with the float as 98 underfoot is a bare minimum for a powder ski. If you are primarily a resort skier who gets the occasional powder dump and goes on the odd ski tour then the Q-98 will do the trick. If you are a western skier where pow at the resort is the norm and you want to ski tour more then I would read our review of the Salomon Q-105 (link to be determined). In the weight department, at 3.76 Kilograms per pair these skis are relatively light and make for easy climbing on the skin track.

Overall, the Salomon Q-98 provides the skier with a stable platform that is snappy and responsive on groomers and able to handle powder snow. I predict this ski will be a big seller for Salomon with resort skiers and those looking to cross the boundaries into the backcountry occasionally. Is it a "One Quiver Ski"? Perhaps, for those in the east were powder is more of a rarity and less the norm. For those of us out west in the powder belt, click on over to the Salomon Q-105 review. 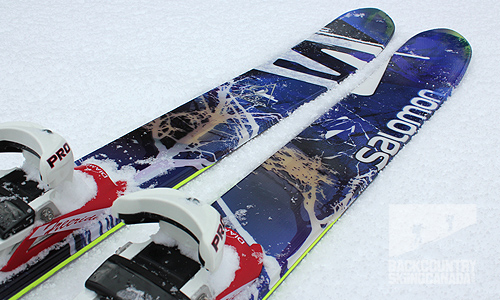 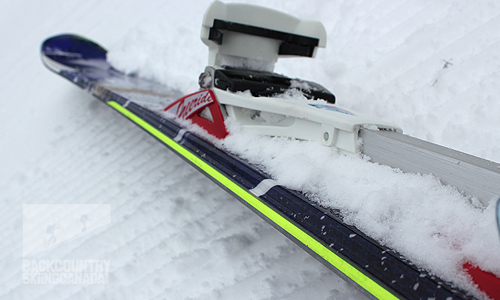 - Super fun and snappy ski that carves up grooms and transitions edge to edge effortlessly.
- Early rise for powder or crud with no tip chatter.
- 5 lengths to choose from.
- Reasonable weight for ski touring.

- Can ski deep powder but the 98 underfoot takes a little more effort, but this is where the Q-105 comes in.
- Not a fan of the top sheet design but I do like the subtle translucent art that shows off the core.