If you look at these boots and say: “Hey…they look a lot like something Garmont put out a couple years back,” you’d be right. The Garmont line of ski boots was purchased by Scott. If you are looking for a pair of Garmont hiking boots or approach shoes (I have a pair and I love them), fear not, they are still available under then Garmont brand. Soon after the acquisition of the boot line, Scott put out a new Cosmos I and it had some problems; things like the Dynafit toe pin holes not performing as they should. With the Scott Cosmos II, that issue has been worked out and the boot is good to go. 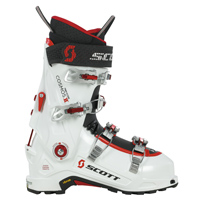 To take a look at a Garmont boot we reviewed a few years back, the Delerium. For more context, click here for an interview we did with Paul Parker (the legend) at the SIA show in Colorado last season. Paul is talking about the SuperGuide, a beefed up/carbonized version of the Cosmos II. Note that, for the 2015/16 season, the Scott Cosmos II has some cosmetic changes but is basically the same boot as is reviewed here (with Dynafit made inserts).

The more boots I ski in, the more I realize that some boots just don’t fit me, and, as is the case with the Scott Cosmos IIs, some do. Fit is really half the battle. Some boots’ shell sizes “break” on the half size, some break on the whole size, some have bigger toe boxes, smaller heel cups, etc. My point is that if it’s at all possible, you should try on a boot for size before you plunk down the cabbage. If the boot doesn’t fit, don’t by it. I may be stating the obvious, but maybe not.

We shot a pretty thorough review of the Scott Cosmos II. Take a look immediately below. If you’d like to see pictures and more info, drop in after the vid.

Fore and aft shot showing the walk mechanism we talk about in the video. Solid four-buckle construction. 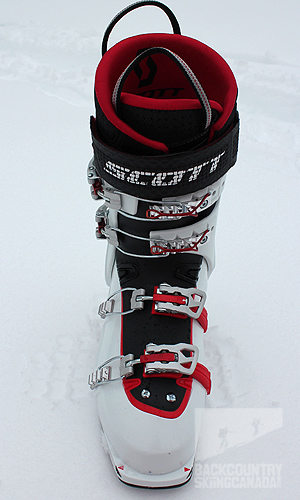 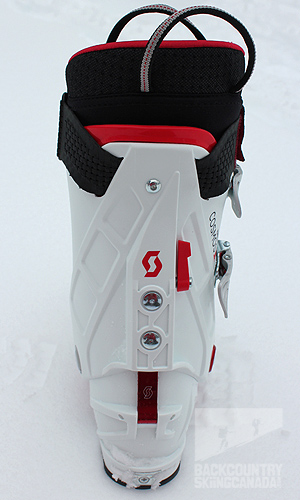 And here’s the left and right sides. Note the flex points in the tongue—new last year. 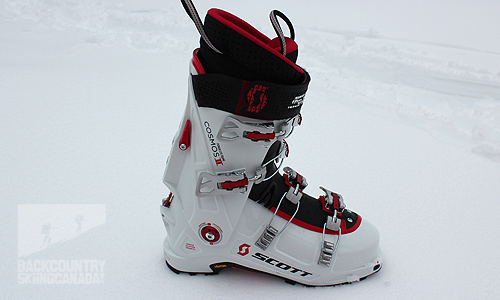 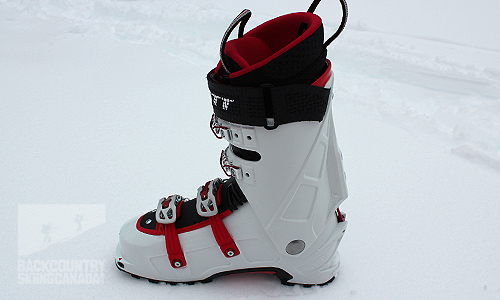 Here’s a close-up of the buckle-feature that allows them to be flipped up and clear. Seen here in the up position. Apparently, for 2015/16, the screws you see here on the bottom end of the tongue have been replaced by rivets. 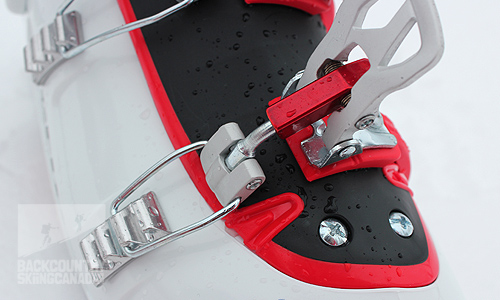 And here is the additional clasp/gate, in red, which keeps things tight and tidy on the up track or heading down. A similar feature is found on many of the Scarpa boots we have reviewed. 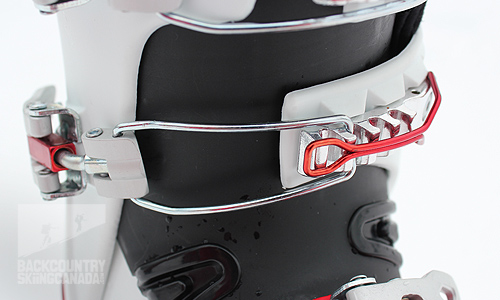 Here are the tech toe fittings that let you run the boots with a Dynafit/tech system (thank goodness). Note that, for 2015/16, Scott AT boots will have tech fittings that are manufactured by Dynafit. Look for the telltale red plastic clasp that fits into the toe pinholes. 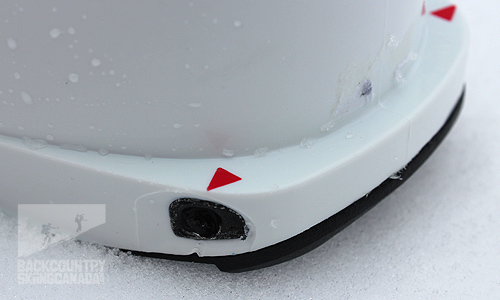 And, L to R, the Vibram “biomaterial” sole with sticky rubber and the PWRLITE liner which uses the same foam as Intuition—very comfortable. 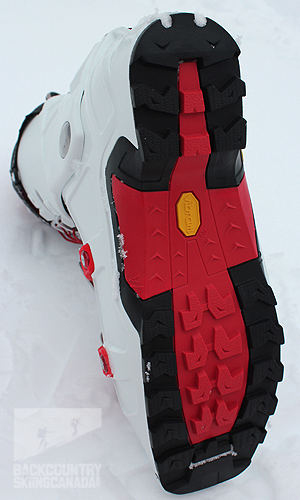 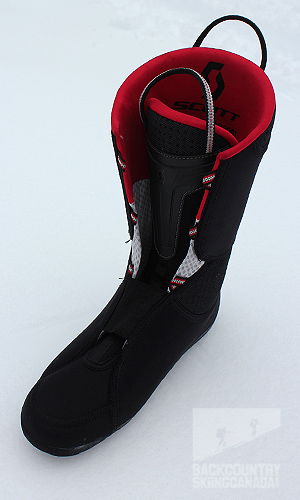 The Scott Cosmos II boot clearly comes from a long lineage of alpine, tele and AT boot making. Though the Scott name is on these boots, Garmont craftsmanship and knowledge is still apparent. The Garmont, Scott brand transition may have resulted in rare “non-optimal” product for a season, but they’ve worked out the kinks and are now delivering top-notch boots.

Though they may not be as stiff as a boot like the Dynafit Vulcan (which we love), they are about 140g lighter. The stock liner is also a good ‘un and uses the same thermoformable-friendly foam as Intuition. The Vibram sole is a bonus and they fit (me) like a glove. They are the perfect touring boot for all but the biggest skis. Nice boots for sure.