G3's Cabrio 30 AR is a lightweight avalanche airbag pack that doesn't give up any features that all good ski touring pack should have. Function doesn't follow form on this one and did we mention you can actually travel with it as well? Double bravo G3!

G3’s entry into the avalanche airbag market with their new Cabrio 30 AR Backpack is a welcome one. The ‘AR’ stands for Alpride which is the airbag system that the Cabrio uses, the 2.0 version to be precise. This is said to be one of the lightest airbag systems on the market at only 1.13kg or 2.5lbs, and after my testing, I believe them. When you combine the weight of the pack with that of the airbag system, and the cartridges, the Cabrio tips the scales at 2690g or 5lb 15oz which makes it about half a kilo or roughly 1lb lighter than most other avalanche airbags on the market. 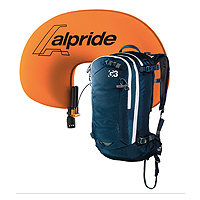 Don't let the clean/simple exterior of G3's Cabrio fool you, within it lies one of the best avalanche airbag systems on the market. 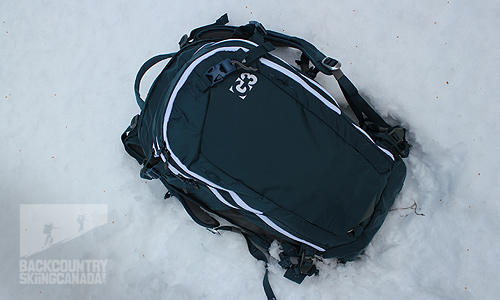 The Alpride 2.0 System uses one-time-use cartridges of CO2 and Argon Gas to inflate the 150-litre airbag in approximately three seconds. The cartridges are easy to use and relatively cost efficient to replace and best of all they comply with both International Air Transport Association (IATA) and TSA regulations so you can easily fly with the G3 Cabrio pack. It's recommended that you check the pack and don't take it along as carry on luggage to avoid confusion with airport security and also downloading this paperwork which you can provide to security to avoid any confusion or delays. You’re allowed to travel with 2 sets of cartridges for one pack as these items fit into the category of safety inflatable devices according to the IATA. Flying with the Alpride system is super convenient as there is no need to look for canister refill locations once you land. If you happen to use your cartridges out in the field you can find new ones anywhere G3 gear is sold. G3 describes the Alpride 2.0 system as “Set it & Forget it”. Since it’s a mechanical device there is no software, no batteries, and no maintenance required. The Alpride’s gas cylinder design was inspired by those found in emergency life jackets which have been trusted for nearly 50 years.

Below you can see a schematic of the airbag system along with the real thing inside the Cabrio. A close up of the two cartridges shows just how small they really are. 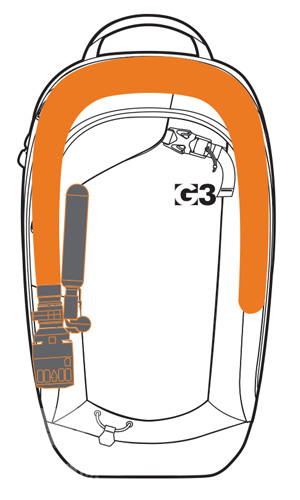 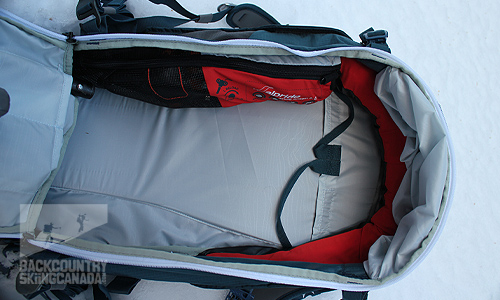 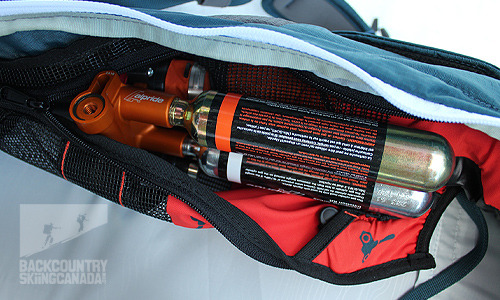 The Alpride 2.0 Airbag System only takes up 1.7L of space inside the top of the pack which leaves you with a true 30L of usable space within the Cabrio Pack. A separate avalanche tool pocket and fleece lined goggle pocket along with a helmet carry option leaves the main compartment free for extra clothing, lunch, repair kit and first aid gear. Your skis can be carried externally on the Cabrio in both A-frame and diagonal orientation. You can even carry a snowboard without fear of it interfering with the airbag’s deployment. 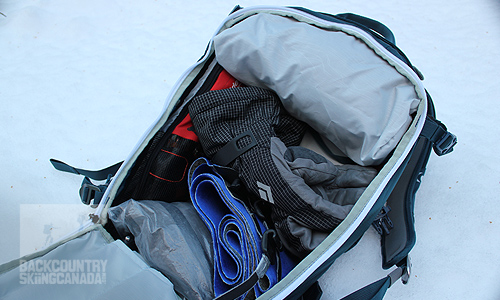 The fleece lines goggle pocket is massive and can easily carry your goggles or sunglasses along with your full lunch. 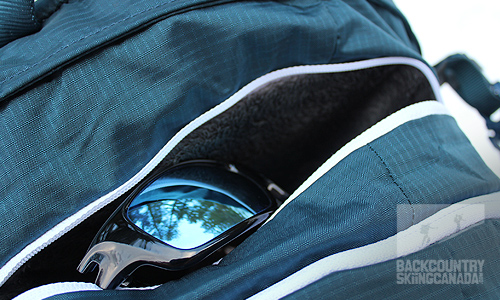 The external avi compartment is spacious enough for all your tools and the velcro flap ensures they stay put when the sipper is opened. 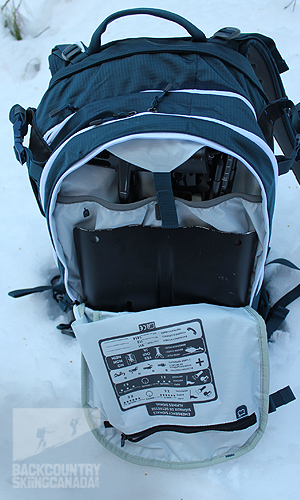 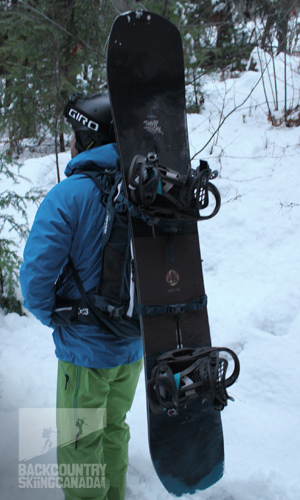 Snowboard carry above and ski carry options below. 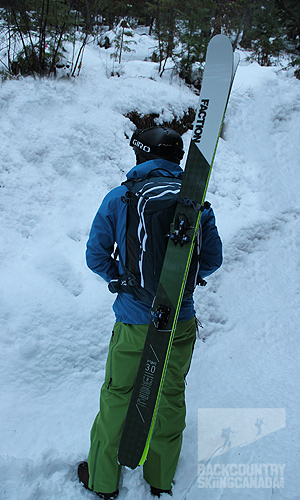 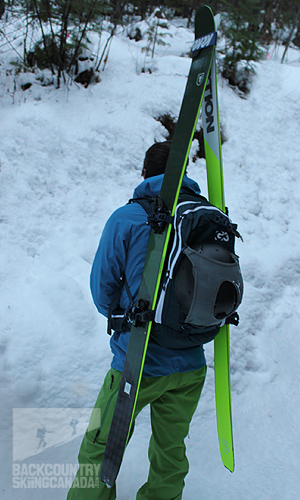 The Helmet carry is a must have and works well, even with the A-frame ski carry. 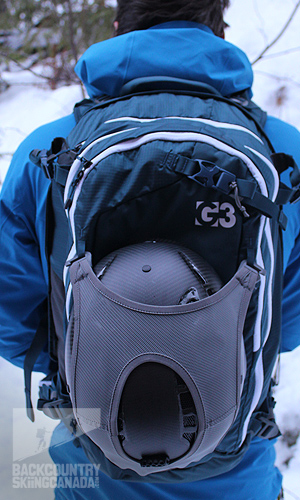 Wearing the Cabrio Pack feels just like a regular ski touring pack, the additional weight of the airbag system is hardly noticeable. The Cabrio’s close-fitting, narrow form stays next to your body while the snow-shedding moulded back panel transfers the load of the pack to your hips where the padded hip belt keeps it snug. If you need some guidance on how to set up your new Cabrio Pack, look no further than this video. 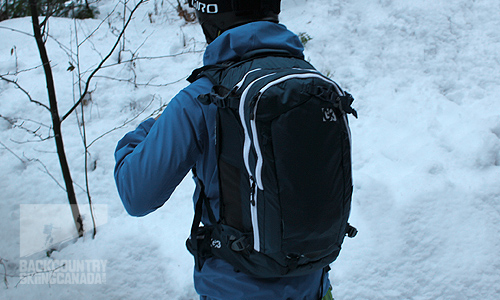 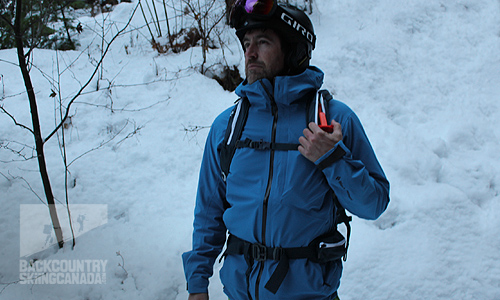 The hipbelt pocket is big enough for snacks and sunscreen but a second one would be doubly as good. 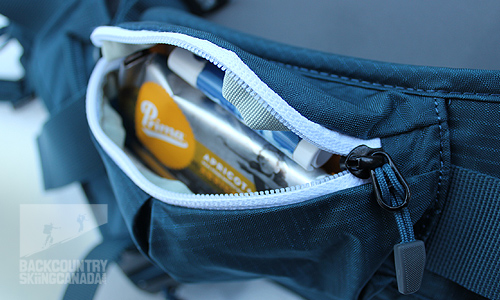 The simple yet effective trigger design is easy to pull and stays hidden away in the shoulder strap when not needed. 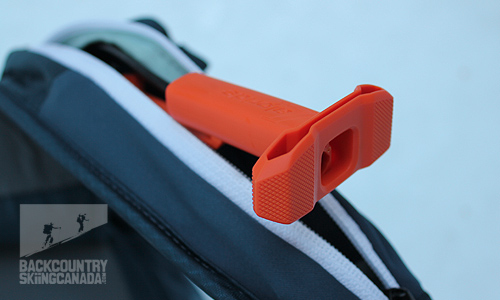 The safety leg loop is mandatory so that the pack does not ride up when the airbag is deployed. 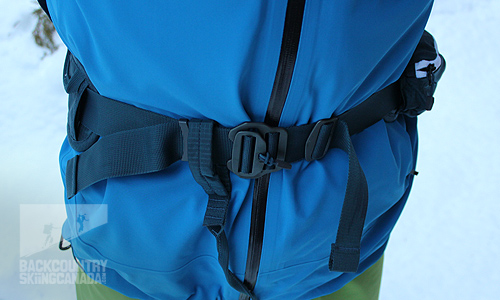 Many iterations of earlier avalanche airbags, such as the Osprey Kode, were pretty heavy, tipping the scales at 5-8lbs just for the airbag system, not including the pack itself. This was the main drawback for me, I simply didn’t want to carry around an additional 5-8lbs even though I knew the added safety benefits that it provided were well worth it. Fast forward four years and the technological design advancements have helped bring the weight down into a more reasonable realm. The new Alpride system found in G3’s Cabrio pack weighs only 2.5 pounds, which includes the Alpride system as well as the full compressed gas cartridges. This additional weight is very respectable and given that the system doesn’t take up that much space inside the pack it still leaves you with a true 30L for your gear.

Weight aside, the Cabrio 30 also provides lots of versatility thanks to its well thought out design. Most avalanche airbag packs can’t carry skis A-frame style because this would interfere with the airbag deployment. Not the G3 Cabrio 30L, it allows for Diagonal and A-frame ski carry as well as a snowboard carry option. On top of this there is a dedicated avi tool pocket and a helmet carry system which I think are both ‘must haves’ on any ski touring pack . Give up features like these to save on weight or accommodate the airbag system deployment are just poor design in my mind and I’m glad that the folks at G3 were able to make it all work. If you want to carry skis and a helmet at the same time, however, then the A-frame ski carry is your only option unless you put your helmet inside the pack which would be a stretch even with its true 30L capacity. If you don’t want to carry the airbag system for whatever reason it’s easily removed so you can go lighter and faster.

“Set it & Forget it” is the motto G3 preaches when referring to the Cabrio’s Alpride 2.0 Airbag System. This is because it’s a purely mechanical device which requires no software, no batteries and no maintenance. It really is a simple system to set up and care for and on top of that you can actually fly with it. This was another deterrent for most and why fan activated airbags are gaining in popularity.

The mechanical trigger system of the Alpride 2.0 is simple in design and stows nicely in the shoulder strap. It offers up 3 length adjustments for various sized skiers and preference of placement in the left or right-hand shoulder strap. A nice touch to ensure that the trigger handle is always within easy reach.

The pack itself fits very well and hugs your body with its low profile design so it doesn’t jostle around when skiing and allows you to duck obstacles if needed. The materials used are robust and work well at shedding snow. I found that the 30L size provided just enough space for my lunch, extra layers, safety gear and snow science gear that I regularly carry.

Since nothing is ever perfect, there are a few minor improvements that I’d like to see in future iterations of the Cabrio pack. Namely, why have one hip belt pocket when everyone always needs two, the gear loop on the right side can stay but add in another pocket (and make them slightly larger please). It would also be very handy if the unused shoulder strap sleeve that the trigger system does not use could accommodate a hydration system. I think it could easily be done but G3 does not state that the Cabrio is hydration compatible so I have not rigged mine up. The avi tool compartment is also not a confined space as the probe and shovel handle can poke out into the main gear compartment, while this is to accommodate longer tools, it’s a real pain as they slide down and get in the way of other items.

While I have yet to see a back panel access avalanche Airbag, it would be a welcome addition if technically feasible as this would allow for easier access to the main compartment but as it stands the Cabrio’s design is pretty solid and one of the best I have tested to date. The minimal weight of the airbag system makes it a ‘no-brainer’ to use this pack every day and the amount of carrying capacity within the bag is all you’ll need for a big day out in the mountains. The Cabrio 30 AR is feature rich and doesn’t make any compromises in usability in order to stay lightweight. It does pretty much everything I could ask for and more.