Fritchi’s new Tecton 12 Bindings are a lightweight, fully DIN certified tech binding which performs like an alpine binding on the ski down and a tech binding on the climb up. Fritschi combined their Vipec toe piece with a more alpine style heel piece that moves back and out of the way in tour mode. The real magic with this binding, however, is the fact that both the toe and heel units have a release value or DIN setting. This provides a more reliable release which can be tailored to an individual’s weight and ability, more like an alpine binding. This ensures that the Tecton 12 releases and not your knee’s ACL. The Tecton’s (and Fritschi Vipec) toe piece is quite unique in that it has a built-in lateral safety release that allows it to be set for specific release forces. All other alpine touring (AT) binding’s tech toe units rely solely on the built-in spring tension which does not offer up a custom release value setting. 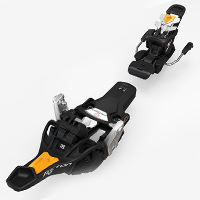 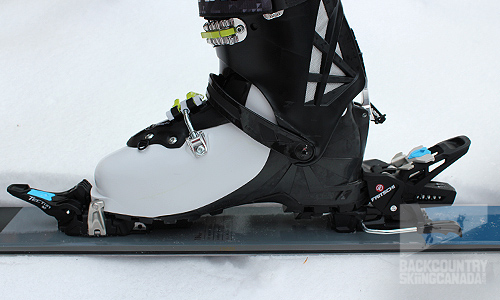 Elastic travel in both the Tecton 12’s toe and heel units allow them to float as the ski flexes, while most other tech bindings such as the G3 Ion and Marker Kingpins only provide elastic travel in the heel while the toe piece remains fixed since it employs a traditional tech design. The Fritschi Tecton 12 only competes with Marker’s Kingpin and Salomon’s soon-to-be-released SHIFT binding, since all other tech bindings on the market don’t incorporate an alpine heel unit with a lateral release. The Tecton 12 and SHIFT are also the only AT bindings which allow the user to set a release value in the toe units, while Fritschi’s Vipec binding is more of a traditional tech binding which doesn't provide the added safety of the Tecton 12’s full release heel design.

For a review of the Vipec binding click on over here and if you want to read all about Fritschi's new Xenic 10 Bindings you can do that here. 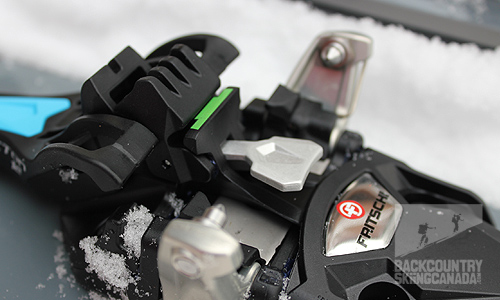 Toe Unit
Fritschi has resolved the ‘hard to step in’ issue that plagued earlier versions of their Vipec toe piece with the addition of a small bumper on the toe. This has gone a long way to ensure an easy step in with a firm closure of the arms. The toe unit’s 13mm of lateral release elasticity helps to prevent pre-release and their adjustable toe pins allow them to accommodate AT boots of different widths. The Tecton 12 is also the only tech binding which has a toe unit that remains releasable while in tour mode which is a huge safety feature in the event that you ever get caught an avalanche while skinning up. 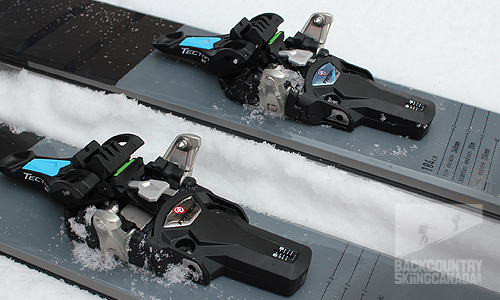 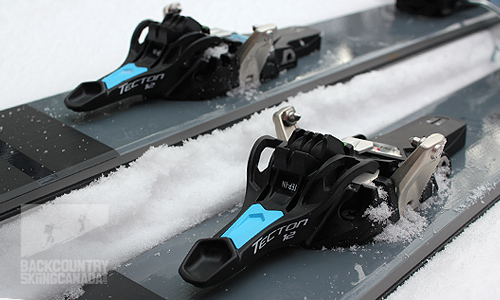 Heel Unit
While most tech bindings utilize a swivelling heel piece the Fritschi Tecton 12 Binding’s heel is more akin to that of an alpine binding. Instead of rotating, it moves back and out of the way, similar to how the Marker Kingpin binding operates. Unlike the Kingpin, however, it is possible to switch from ski to tour mode (and back again) without having to remove your skis or bend over. This operation can be performed with a ski pole and saves considerable time transitioning from uphill to downhill mode. Rather than using metal pins to secure the ski boot, the Tecton 12 uses an alpine style, step-in mechanism which means that there is a solid and direct connection between boot and ski rather than the boot floating on pins.

Built into the heel of the Tecton 12’s is what Fritschi calls their “Power Rails”—these are essentially two protrusions moulded into the heel unit which align with the tech fittings in an AT boot. This provides an easy way to automatically align an AT boot to the binding and adds some additional security and retention. The heel until also has an adjustable vertical heel release with 9mm of elasticity. 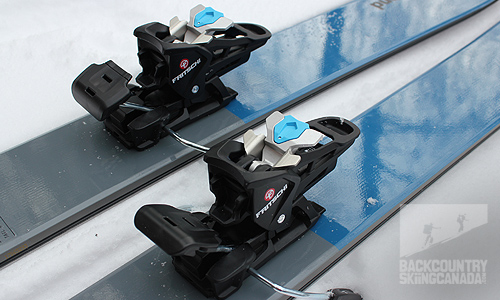 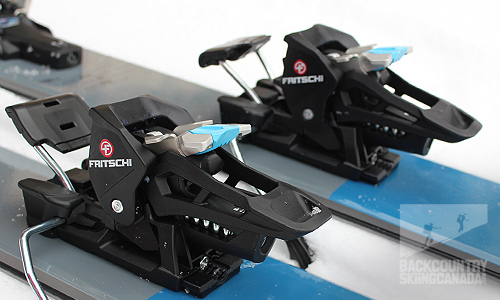 Risers
The Tecton 12 offers three heel positions – flat, low and high. On level or slightly inclined terrain the flat position with no heel riser is the one to use and while it actually measures at a 2° rise you’d be hard-pressed to notice it. When the terrain steepens the first riser offers 9° of inclination which helps off-set the increased steepness of the terrain, and to get truly vertical the second and final riser option provides a welcome 13° lift. 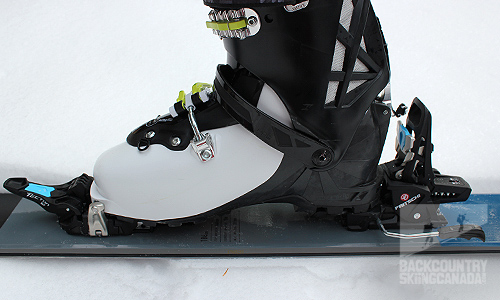 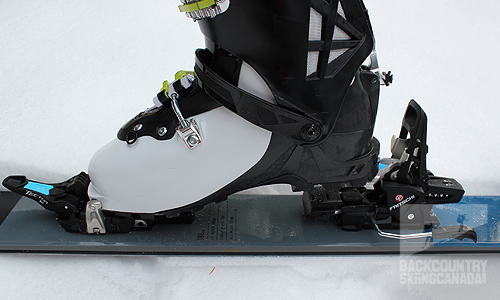 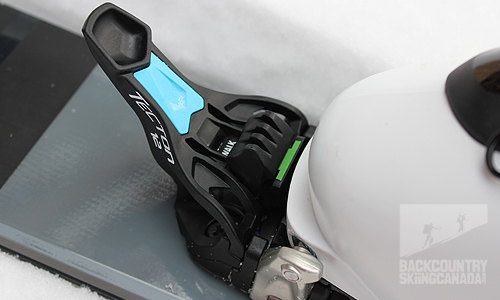 There is no denying the benefit of the Tecton 12’s adjustable toe and heel release values, nor their lateral release capabilities. These safety benefits come at a cost though, in the form of added weight. Given the amount of technology that Fritschi has to engineer into the Tecton 12’s this penalty is minimum. While they are heavier than a pure tech alternative, when you compare them to the Marker Kingpin 13’s they are lighter by nearly 100g per binding. A lot of this weight advantage comes in the form of additional plastics being used which could be an issue over time. In terms of downhill performance, the Tecton 12’s felt super solid and easily more secure than a traditional full tech binding, and comparable to the Kingpin’s. Power transmission from boot to ski was optimal thanks to the Tecton 12’s alpine-style heel with built in Power Rails. This eliminates that discernible wiggle that you may detect in the heel unit of full tech bindings which float the boot on tech pins.

Having spent the better part of half the ski season testing these binding in all sorts of snow and terrain I can say I am a fan, but they are not without their intricacies. As you may have guessed by looking at the pictures of the heel piece, the risers are tricky to engage with a ski pole. Because they do not protrude enough to the sides of the heel unit it will take some practice (like with any new touring bindings) in order to become proficient. When opening and closing the toe unit’s arms you’ll also need to retrain yourself to use the heel of your boot and not the toe as is common when using other tech bindings. This is because the toe lever does not protrude far enough above the toe unit, so the sole of your boot will hit the toe unit before the arms click into the open position. Not a huge issue, just some retraining on your part. One last issue I noticed with the Tecton 12’s is that since the heel piece stands at a right angle to the ski when in tour mode, it can act much like an anchor when breaking trail in deep powder. This typically occurs on only with the uphill ski as the heel unit scours the uphill wall of snow created by your boot as you break trail. This is a rare occurrence but something that had me baffled until I figured out why my uphill ski seemed to require more effort to move than my downhill ski while breaking trail in snow deeper than a foot.

Overall the Tecton 12’s are reasonably light, provide good performance and offer up additional safety features. Their ideal for those looking to go big in the backcountry while not necessarily covering a lot of ground, or concerned with having the lightest gear on the market. If you find full tech bindings a hassle to use then these may also provide some reprieve, the fact that they provide increased downhill performance over traditional tech bindings is just a bonus.

For this review we mounted the Fritschi Tecton 12 Bindings on Black Diamond’s new Boundary 107 Skis so be sure to read that review as well.