Fritschi has long been a major player in the alpine touring binding market with the success of their Fritschi Freeride Plus, Titanal, Scout and Eagle frame-based bindings. With the advent of Dynafit’s tech binding innovation and subsequent patent expiration, the market has exploded with tech binding options now available from every binding manufacturer out there. While Fritschi was initially slow to the game, they took their time and ultimately released the Vipec 12 and Vipec Evo 12 Bindings which use a traditional tech toe and heel with an adjustable release value for both. Next came the Tecton 12 which was Fritschi’s all-mountain touring binding that competes with the likes of the Maker Kingpin and Atomic Shift bindings. The Tecton is similar in design to these other options as it uses a standard tech toe and a more traditional alpine heel design. Both of these new tech bindings from Fritschi weighed over 1000 grams (without brakes) so while they were light this still left room for Fritschi to develop a true lightweight tech binding. This brings us to the Fritschi Xenic 10 Binding which weighs a mere 560g / 19.7oz per pair without the brakes and an impressive 650g/23oz with brakes. 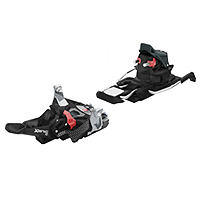 Lightweight and fully featured, the Fritschi Xenic 10 Bindings are easy to use and won't let you down. 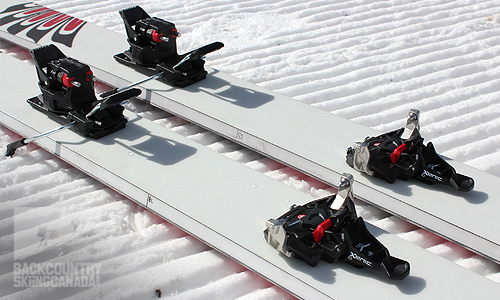 The Xenic toe piece doesn't use your average tech toe design, it’s been redesigned by Fritschi from the ground up to be light and safer without over complicating things. For starters, the pin arms move horizontally with no vertical loss or gain as all other tech bindings operate. This means that there is a reduced rate of pre-release and no chance of ice build-up under the centre of the arms as it is not exposed to snow. 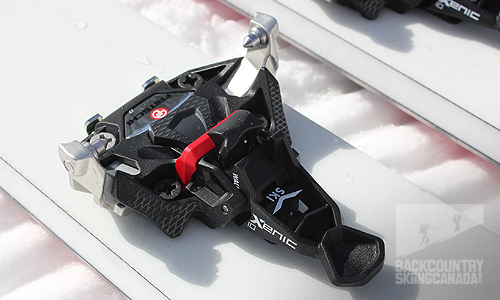 Stepping into the Xenic 10 Bindings is super simple thanks to the large red ‘pedal’ which helps align your boots with the pins, likewise the larger trigger built into the toe’s platform effectively triggers the toe arms to close with a deliberate force. There is also a forward fall trigger which sits in front of your boot’s toe and is activated when you experience a forward fall. Once the toe of your boot pushes on this trigger it opens the toe wings and releases your boot from the binding. 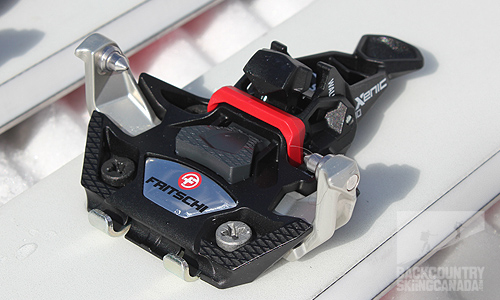 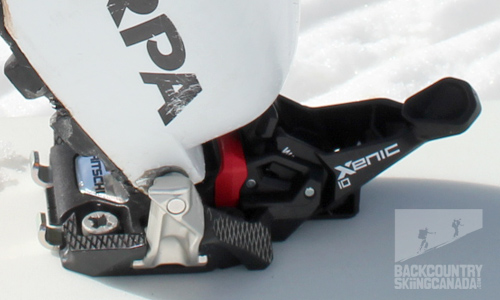 On the heel piece, Fritschi has incorporated independent lateral and vertical releases with adjustable values from 4 to 10 for each. This which accommodates lighter, less aggressive skiers including the average skier out there which the Xenic 10 is designed for. 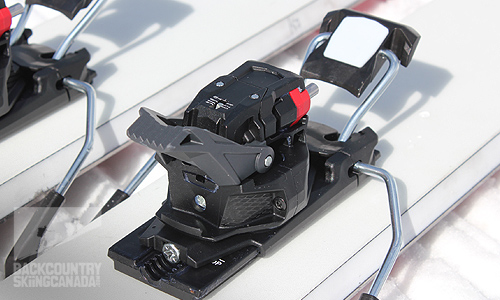 The Xenic 10 Bindings have 25 mm of fore and aft adjustment for different boot sizes which is very generous for a lightweight tech binding. There is also 10 mm of length compensation in downhill mode, which ensures a reliable release and maintains forward release values allowing the ski to flex naturally. 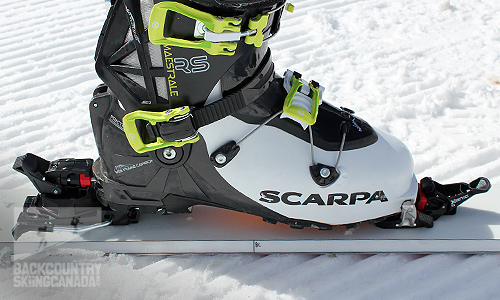 Independent pins are used in the Xenic 10's heel turret instead of a U spring which most other ultra-light tech bindings opt for since it saves on weight and complexity. These independent pins make stepping into the Xenic 10 Binding much easier since they rotate freely which also helps to reduce wear on your boot’s heel pin fittings. 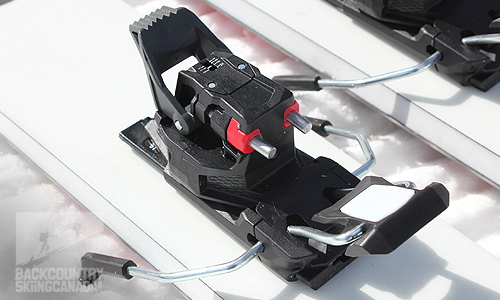 In order to switch from ski to tour mode, you need to simply rotate the heel turret 180 degrees so that the tech pins can no longer engage with your boot. This will provide a relatively flat 2° incline for easy climbs, should you need more you simply have to engage the integrated riser which provides an 11° or 6.4cm advantage.

With the heel turret in this turned position ​​​​​​, the brakes are automatically stowed with your first step down—they are released when you rotate the heel turret 180° back to the front-facing position. 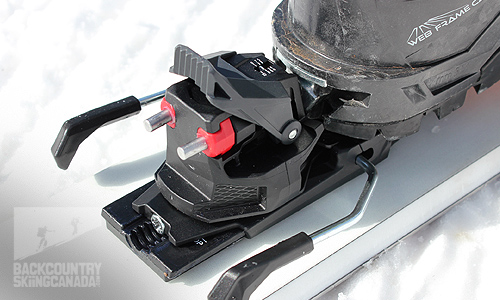 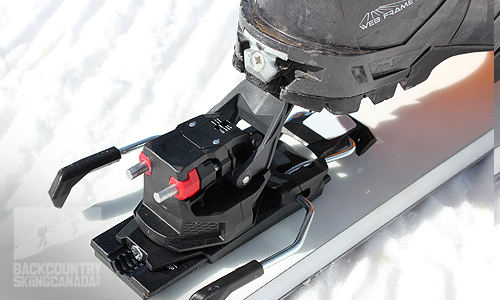 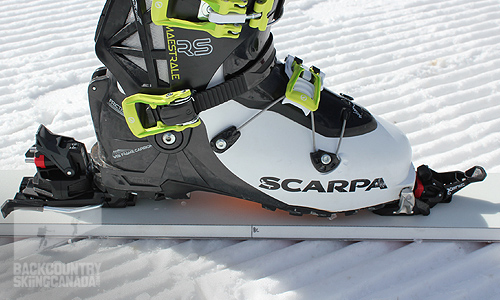 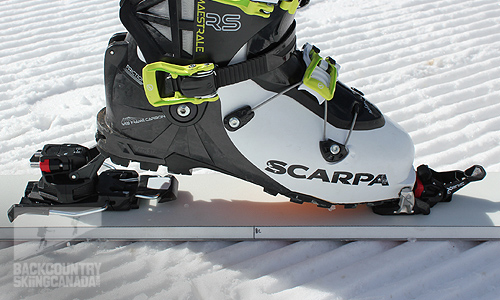 Crampons are of course available for the Fritschi Xenic 10 Bindings in 85mm, 95mm and 105mm widths. 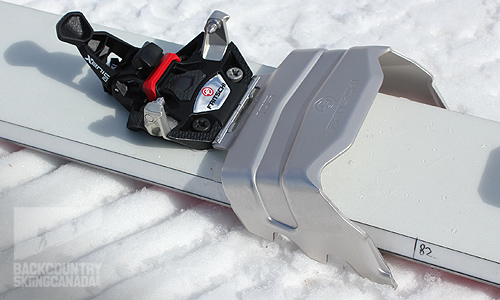 
Below you can see the Xenic toe piece locked out and ready for walking, with the second photo showing it unlocked and in ski mode. 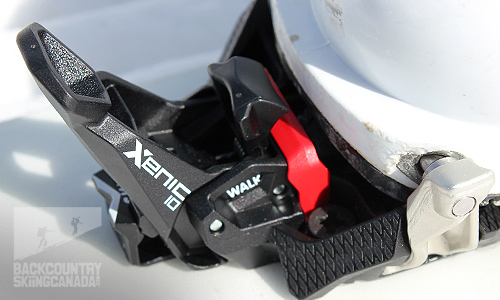 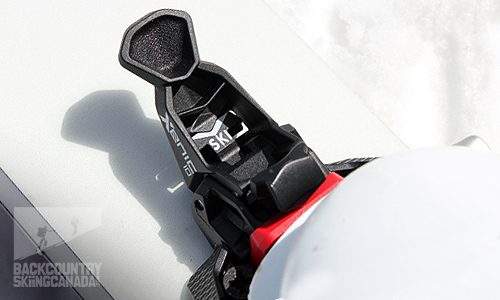 To say I am impressed with Fritschi’s latest tech binding the Xenic 10 would be an understatement. Not only did Fritschi incorporate innovative new features into both the toe and heel piece but they also managed to keep the entire package at just 650 grams for the pair (brakes included). This is a huge weight saving compared to their Vipec and Tecton Bindings which both weigh over 500 grams per binding without any brakes.

The horizontal lateral movement of the pin arms is an innovative improvement on traditional designs which move up as they close and down as they open. The improved safety and reduced pre-release is a nice feature as well as the fact that since the middle of the pin arms is concealed, there is never an issue with ice build-up which prevents some traditional tech toe designs from closing effectively. When you step into the toes they clasp shut with a resounding force that is firm and reassuring. Alignment of the toe pins with your boots at step-in is also very intuitive and easy, more so than most other tech bindings on the market.

The forward fall trigger built into the toe piece is another nice feature but be aware that boots without a toe lug will not allow this feature to function properly since the distance from the toe pins to the nose of the boots will be less than required.

The dual adjustment on the heel piece offers added safety and is a huge selling feature when compared to other bindings in this weight class since the Xenic's provide the standard rotational release as well as a vertical release adjustment.

On the downside, the lack of a second climbing aid is something that most people may miss as the flexibility of two risers is always nice, however, I personally never call my second riser into action on any AT bindings since this signifies that the skin track grade is too steep and it's better to simply lessen it. While Fritschi states two climbing positions of 2° and 11°, the first is really just the flat setting without the riser engaged.

In order to achieve such impressive lightweight numbers, Fritschi has used a lot of plastic in these bindings. While I am sure that their engineers have taken into account all the forces that skiers place on the bindings and I know that they have also used glass fibre reinforced in the plastics on the Xenic, it is more of a confidence thing for me. I like the appearance and mental reassurance that the bindings holding me to my skis are made of a good proportion of metal and not just plastic (no matter how strong it is)—it’s confidence-inspiring and purely my personal opinion. For this reason, while I am comfortable skiing the Xenic 10’s in the backcountry where the snow is typically always soft and plentiful, I would refrain from skiing them super hard in bounds, but again, it's not what they were designed for.

Another way Fritschi has kept the stated weight of the Xenic’s low is to not include brakes or leashes with the bindings. This is something I feel should be included as I would not use a binding without one of these retention devices as I’ve had a ski go rogue on me before which is a quick way to end a day of touring and potentially put yourself in danger. The brakes are available in  85, 95, and 105mm widths and cost an additional $95.95CAN / $64.95US which is on the spendy side of things for such a relatively simple object. The total weight of the Fritschi’s Xenic 10 Binding comes in at 650g/23oz per pair and will set you back just south of $700CAN or $500US. Overall still a good deal for such an impressively light tech binding that performs exceptionally well.