The Zoleo entered the category of two-way Satellite Communicators in 2020, competing with the likes of Garmin and Spot - companies that have been somewhat uncontested in dominating the market for the last decade. Zoleo’s goal: To provide a low-cost product and a clean user interface on the Zoleo phone application that will shift the tides of satellite communication devices.

The Zoleo Satellite Communicator provides a simple, clean, and effective user interface that works great as a two-way messaging device whether working in the field away from cell reception or kept as an emergency device for any wilderness pursuits. At 5.3 ounces, with an IP68 weather-resistance rating and easily fitting in your hand, this device is portable for any application and takes only a few minutes to learn how to operate smoothly. The satellite communicator works through the Iridium network and provides the ability to send location information and reliable text & email messaging to phones, computers, or other satellite devices. While it's not without some inherent downfalls, it’s a solid and dependable product that should find itself in the backpacks of many remote travelers and workers.

The Zoleo Satellite Communicator features a carabiner-style clip so you can attach it to the outside of your bag for quick and easy access in the event of an emergency. 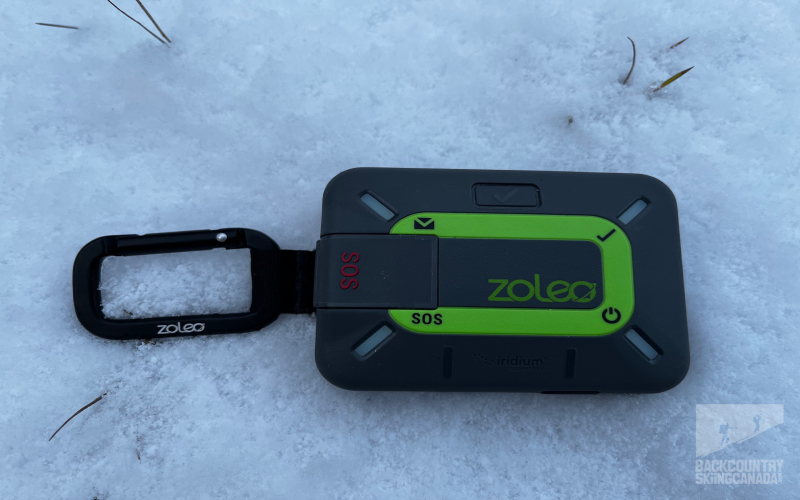 SHOW THE REST OF THE REVIEW / PHOTOS / VIDEOS
The Zoleo base unit is quite simple. The device contains only 3 buttons and one charging port, as well as a lanyard and carabiner. While you can send a distress signal and your location with the incorporated SOS/Check button on the device itself, much of the communication ability relies on a Bluetooth connection through your mobile device to send/receive text messages, emails, and weather data.

The primary button, in red (which is protected by a flip cover) is the SOS feature. As one would come to expect, pressing this button would immediately transmit an emergency signal to the dispatch centre, who would then pass along the location information and ‘distress’ call to the proper authorities. Often times these authorities are the police, local Search & Rescue groups, or Park Wardens. I have not personally tested this button myself, but have used the SOS Feature on the inReach Mini and was in contact with authorities in <5 minutes. A bonus with the Zoleo’s two-way capability, is the ability for emergency services to contact the user/operator and relay back-and-forth information that may be crucial to the rescue or incident.

Left: SOS button as seen with the cover flipped up. Right: Size comparison next to an inReach. 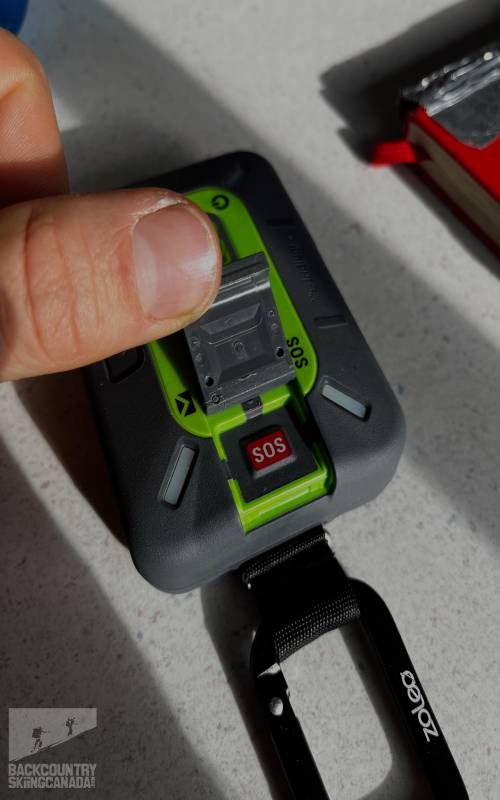 The grey checkmark button is used to send location data and information to a pre-identified list set up through the application on your smartphone. This can be a useful tool to ‘check-in’ and communicate to your emergency contact, friends, or employer where you are and provides a snapshot as to your timeframe for exit or to confirm your arrival.

The front of the Zoleo Satellite Communicator with the 'Check' function button. 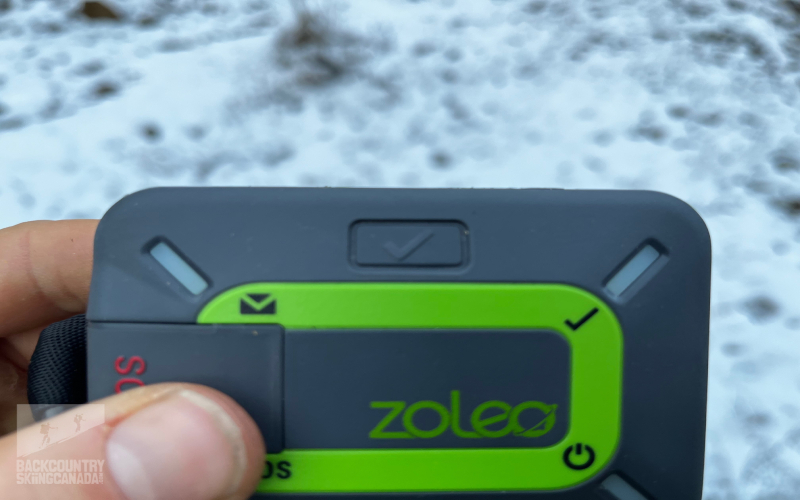 Lastly is the power button which simply turns the device on & off. 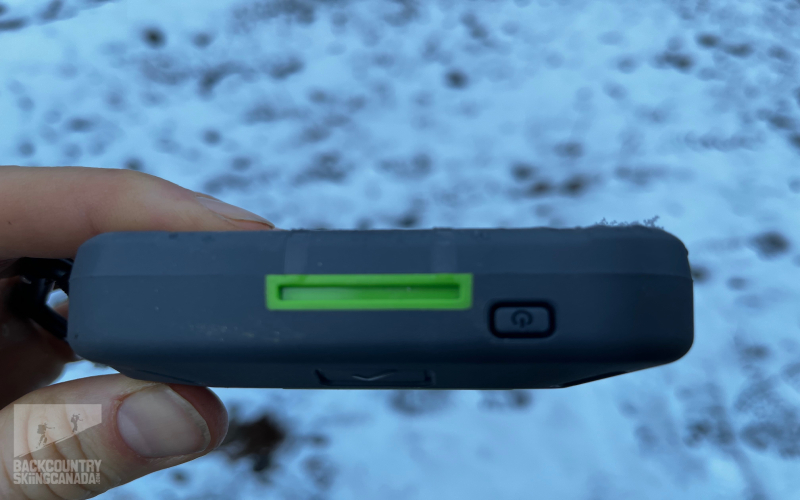 The Zoleo app itself is how the device truly operates. The application is clean and effective and sync’s easily with your Zoleo device. It provides an easy-to-use interface that is similar to the messaging platforms found on most smartphones. It has battery meters, signal strength indicators, outgoing & incoming alerts, weather updates, and confirmation on data sent/received. 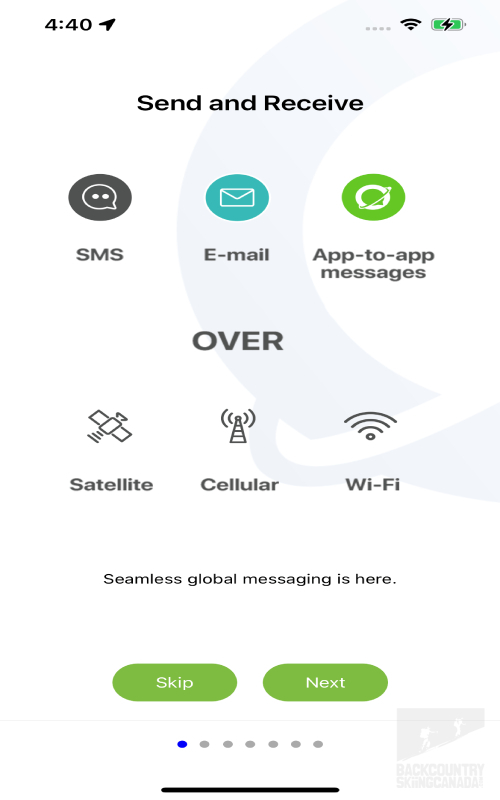 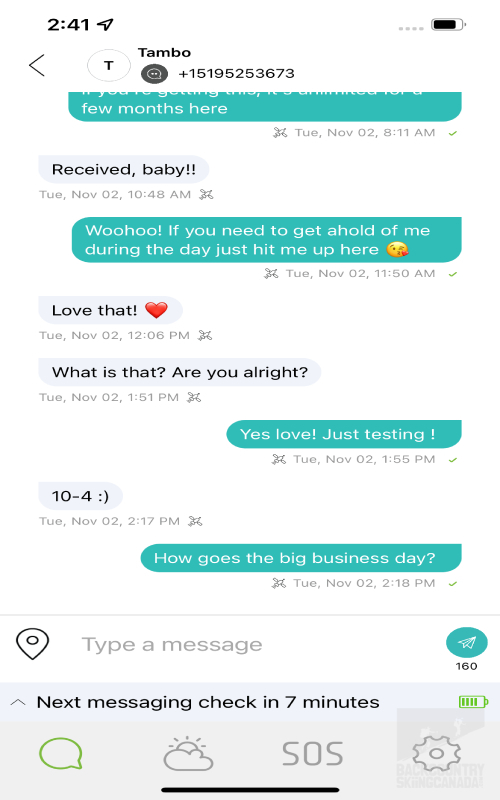 The Zoleo Satellite communicator is a solid product that has many more pros than it does cons and has been seamless to integrate into my daily adventure & working life. This product was tested in cloudy conditions, in sunny clear skies, and during snowstorms. I was able to test this product in the mountains surrounding Revelstoke, BC, and along a worksite from Blue River to Valemount, BC.

The most positive aspect of this product is the ease of connection to the satellite network. I have used many varieties of satellite phones, Spot, and inReach devices – both with the Iridium network and Globalstar network. Never have I had a device connect so easily and be able to quickly send and receive texts and emails. On a side-by-side comparison with an inReach MINI (using the same iridium network) the Zoleo connected within 32-seconds… and the inReach — 4 minutes later. Not only that, you can continue those conversations from the satellite network seamlessly into cell/wifi networks later in the day–without having to switch to a different number, which is a major improvement compared to other products.

Zoleo is light, feels solidly constructed, and works very smoothly with the phone application. For a remote worksite with no cell service, this felt like I was using normal cell reception. The app interface is very easy to use (using an iPhone) and I never encountered any crashes or bugs in the multiple weeks during my testing period.

The one negative of this product is the fact that without mobile device connectivity, you cannot read or compose messages on the device itself. Similar products like the Spot or inReach have features that allow for a quick send of ‘preset messages’ and the Zoleo would certainly benefit from something in this regard. For a work setting, this doesn’t pose a problem, but issues might arise in the backcountry on a cold day when your phone battery is getting zapped faster than patio flies on blue light!