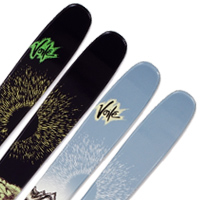 Despite a name that incorporates an accent aigu, Voilé is not from France. In fact, they’re a small company based in Salt Lake City, Utah, and they’ve been making backcountry specific hard goods since 1980. Today, they manufacture five different kinds of skis and three splitboards and in this review, we’ll be looking at two of their offerings – the Voile Charger and the Voile Charger BC skis. A slimmer version of their award-winning Drifter design, the Voilé Charger adheres to the company’s ethic of light but strong. It has an aspen core with a cap construction, a traditional sidecut and camber underfoot. Its tip is tapered and rockered as is the tail, although less so. (The dimensions of the 181cm model are 137mm, 112mm, 126mm.) The only difference between the company’s Charger and Charger BC skis is the latter has an extruded fish-scale pattern on the base which allows you to ascend slight rises without the need of skins.

- Rockered and tapered tip
- Traditional camber underfoot
- Tapered tail with a slight rise
- Wide-radius sidecut
- Aspen core with a cap construction
- Waxless, extruded base underfoot on the BC model for skinless climbing

The Voile Chrager Skis with plenty of camber under foot. 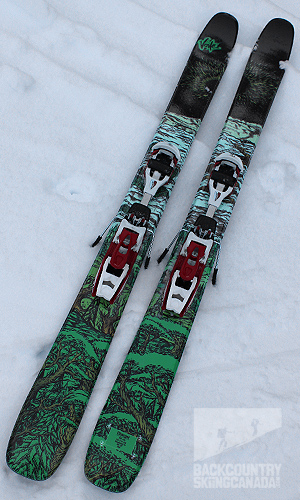 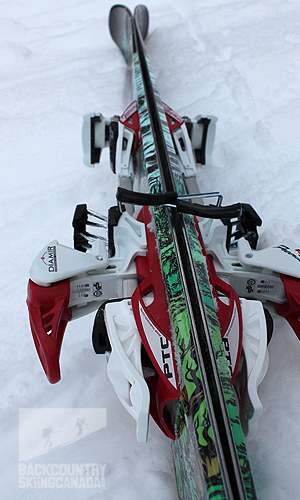 Plenty of early rise on the tip and a bit less on the tails. 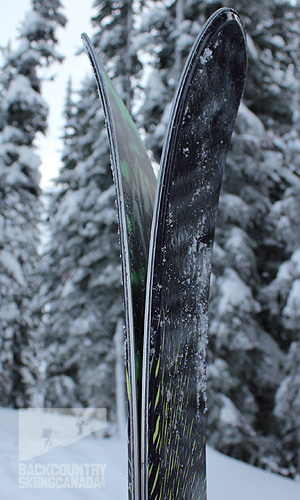 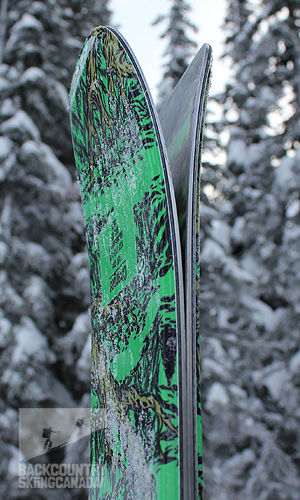 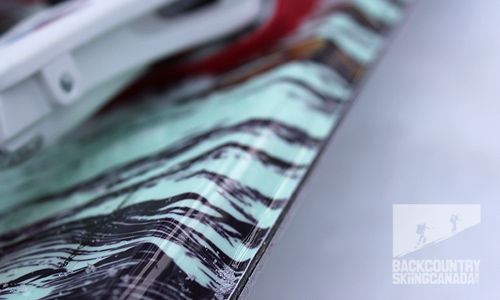 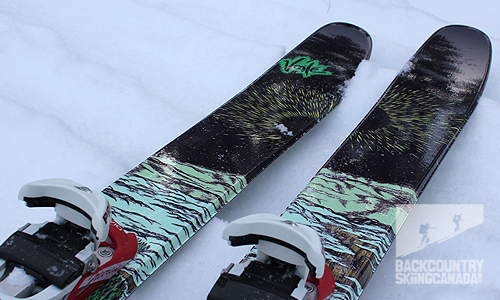 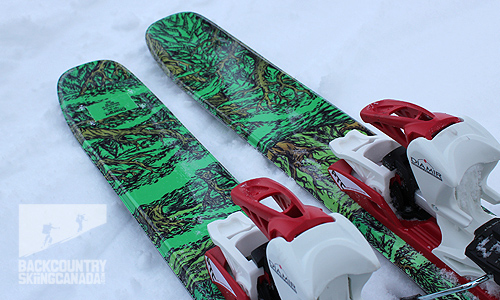 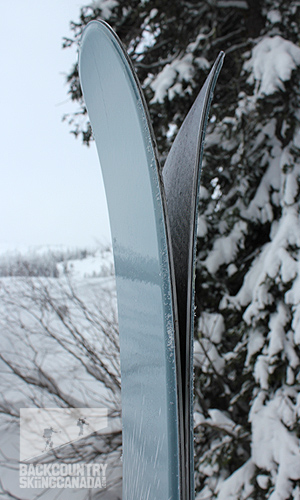 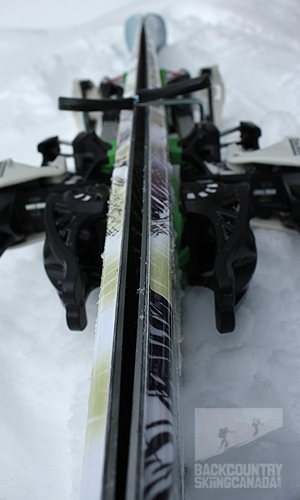 The Voile Charger BC Ski tips. 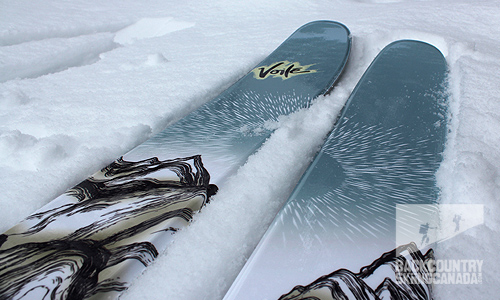 The Voile Charger BC Ski tails. 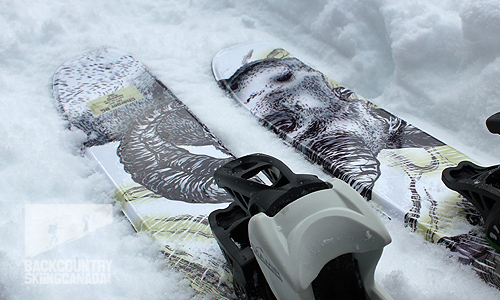 Same tail rise as on the regular Voile Charger skis. 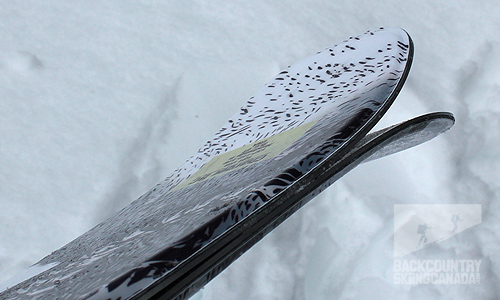 Once again, the same cap construction. 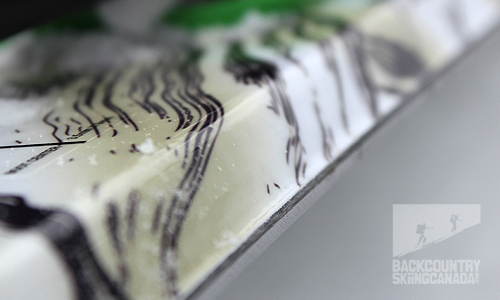 The big differnece and really the only difference, the scales under foot. 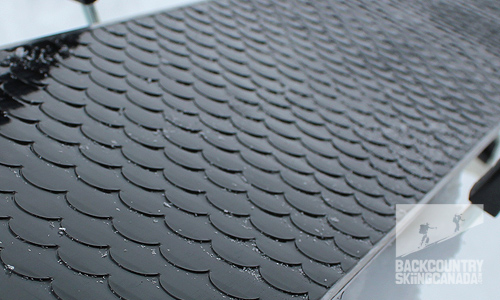 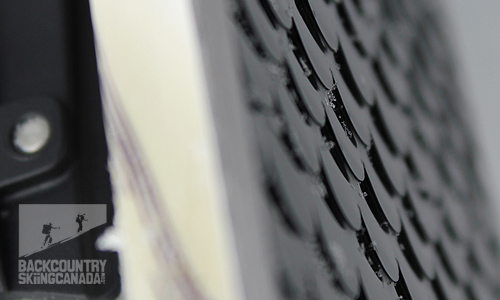 We mounted the Voile Charger and Voile Cahrger BC Skis with the Fritschi Diamir Eagle bindings (which recently won the Backcountry Magazine - Editor's Choice Award) and the Fritschi Diamir Freeride Pro bindings. The Eagles feature 'Diamir Gliding Technology' which places the pivot point on the toe piece 23mm behind the toe of your boot. This, combined with the moving baseplate, allows you to raise your foot until it is completely perpendicular to the ski, resulting in a more natural stride when skinning. The Fritschi Diamir Eagle Bindings are 2kg or 4lb 7oz – not the lightest on the market by any means. The Eagles have a DIN setting range of 3-10 and are $50US cheaper than the Fritschi Diamir Freeride Pros. The bindings work well with the Bigbend, which is a fairly beefy ski to begin with. Together, they make for an excellent lift area/slackcountry combo. The Fritschi Diamir Freeride Pro bindings have a DIN range of 4-12 and weigh in at 2.2kg or 4lb 8oz. With four height adjustments at 0°, 3°, 9° or 13° of lift they provide lots of choice while climbing. The new wider base plates allow for better transmission of power more evenly across todays fatter skis. The Freeride also incorporates 'Gliding Technology' with a price point of $499.95 US.

The Volié Charger is accurately named – these things love to go fast! They remind me of a 9” downhill-specific mountain bike – basically you just have to hold on and they’ll do the work for you. If you’re into hippy dippy turns, or you’re fat and lazy, these are not for you: they are very stiff for a backcountry ski and they love big GS turns. Even on the groomers the Charger performed amazingly well with just a tiny amount of chatter from the rockered tip. I’ve spent about 20 days on these so far this season and have had them in all kinds of snow conditions from deep powder to crust to schmoo to hardpack and all I can say is they’re fun in everything. The shovel tip ensures you don’t submarine and the stiff tail helps bail you out of most dodgy landings. This is not a “freestyle” ski, though, as the stiffness makes it challenging to dump speed but what it lacks in quick maneuverability it makes up for in charge! The only flaw I can point out about the Charger is that the top sheet is prone to nicks and chips – but that’s the case with most cap-construction skis.

The Voilé Charger BC (Backcountry) version is exactly the same as the Charger model but it has an extruded pattern on the base directly underfoot. The technology has been used on waxless cross-country skis for decades but it’s relatively new technology for the alpine. A 30 inch-long fish-scale pattern is stamped into the base under your bindings to allow you to ascend slight rises without the need for skins. The Charger BCs shone on gentle slopes and along mellow access tracks thanks to the full glide of skinless skis. But the second the gradient rose past 15 degrees things got more difficult, especially in the hard pack. Therefore, these skis are a great fit for quick, low-angle ups and rolling traverses – they’ll save you time and gain you some speed on the downhill portions of a traverse. But the fish-scale bases are definitely not meant to replace traditional skins.

Struggling to maintain traction on the Voile Charger BC Skis with out climbing skins. 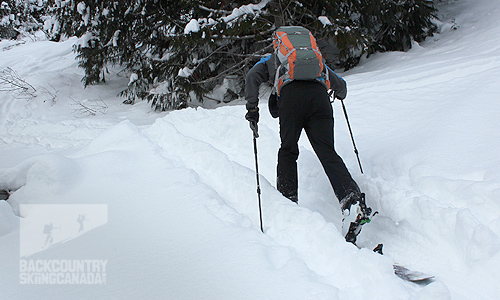 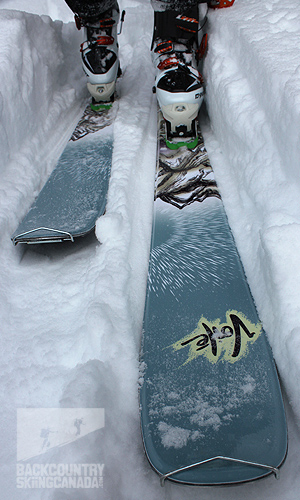