As the worldwide release of Sweetgrass Productions' new film Valhalla approaches, Backcountry Skiing Canada will be releasing a series of interviews showing behind the scenes  from the athletes and producers that helped create this unique snow film narrative.

Interview with Sierra Quitiquit
Sierra Quitiquit is a 24 year old professional freeskier. When Sierra's not on snow she works as a model for brands like American Eagle, Lululemon, Nike and Athleta. Sierra is also a passionate yogi, surfer and world traveler.

In the movie Valhalla, Sierra plays one of the main characters Ayla. This is a very unique narrative approach to a ski film and promises to open up new ground for the whole action sports genre. Upon reading the script and watching some of the audition videos I wondered how Sweetgrass would ever find someone who would get the character, be able to act and understand skiing.  After meeting Sierra Quitiquit it seemed to me like this role was built for her laid back personality, quiet confidence and youthful excitement. Being comfortable on skis and in the backcountry was I'm sure a bonus.

For a review of the Sweetgrass film 'Valhalla' have a read on over here.

How did you come to be part of Valhalla?
Some guy named, "Nick Waggoner" sent me a facebook message in French. I thought it was creepy so I didn't respond. A week or so later his name came up in conversation as the director of Sweetgrass Productions. I went back through my messages and translated his note to English, it was an invitation to come film Valhalla in Nelson.

Have you had much acting experience before this film?
Not really, I somehow landed a gig on a TV show called Portlandia, but most of my work has been stills photography.

I understand that you are fairly new to being filmed skiing, is it more comfortable being a character on screen/posing in a swimsuit  or would you prefer to be ripping down a big alpine feature at high speeds?
Skiing always wins for this girl. I enjoy all aspects of my work but ultimately it's always been all about shredding.

Do you see much difference when it comes to a performance be it, skiing a line in front of a camera or conducting a photo shoot?  Is it all work and professionalism?  What do you like best?  Filming Skiing or modelling?
It's really all just fun. If you start taking it too seriously than you're losing out on the point. Whether I'm picking lines or acting like a goof while a photographer shoots, its all just fun.

Life is often about balancing passion with a paycheque.Do you see modelling as more your job and skiing as your lifes passion?
At this point it's all just melting together in to what makes up my life. If I start to look at one or the other as work it takes the fun out of it. I'm always traveling and almost always "working" but when your work is to go ski lines with a helicopter in Iceland or walk a runway show in New York  it's hard to look at it as work 100%.

Did you have much of a chance to do much skiing/touring while filming or on days off?  Any favorite runs/lines at Whitewater?
Haha not really. We filmed almost every day and I had a blown shoulder so on my days off I went to physio or rested. 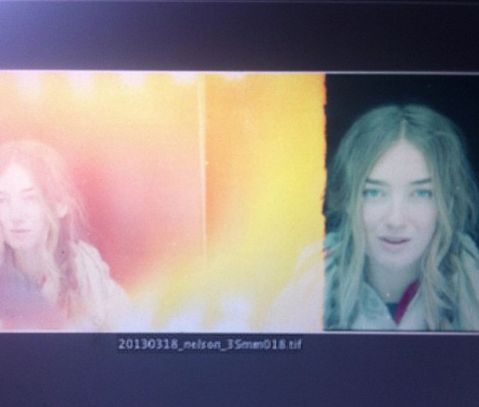 During the production for Valhalla you got to hang out in the Kootenays a fair bit, what stands out about this area of the world to you the most?
I love the Kootenays because they're so raw. They're rather undeveloped and really give you a sense of pure nature. I like that. Nelson felt like a magical escape from the real world.

How was living in a house with an open door policy and skiers coming and going from all over?
The Sweetgrass Chateau is awesome. It's just one big happy family. Everyone takes care of eachother. We traded off cooking meals, doing dishes, etc. It was really cool to hang out with Pep Fujas. He is such a nice guy. He really set an example in the house for helping out whether that was dish duty or carrying equipment.

In the last year or so you had some amazing trips, is there anywhere in the world that you look forward to skiing next?
I'm just getting back from summer skiing in New Zealand, that was super beautiful and I'm looking forward to heading to Chile next week.

What have you been doing with your summer?
Skiing, modeling, traveling, hiking, kicking it with my little brothers and my boyfriend Julian Carr.

Where is your favorite place to back country ski?
Las Lenas, Argentina

Home base for Sweetgrass in Nelson for the last two years has been a large family house that has often times been the home to upwards of twenty athletes, travellers, interns and friends.  What's the most people that the house slept at once?
I'm not sure? 15?

Out of all the people who cruised through the house in the last two years, who was the best cook?
Photographer Lindsey Ross… Lemon bars yum!!

Who had the best music playlist?
Nick Waggoner, oldies but goodies.

Who had the stinkiest socks?
Me

Who told the best stories?
Todd

I'm not sure if you had a chance to watch much of the footage from Valhalla if you have, what's your favorite segment?
Naked skiing!

I'm pretty sure thats your long hair in the trailer!
Might be…

Thank You Sierra, look foward to having you back up in the Kootenays.
Thanks!!!! Hope you're great!!