With a long history of designing the very best packs for firefighters and military, Dana Gleason has now focussed on the Ski touring customer. His company, Mystery Ranch, has created the Patrol 35 that carries weight and organizes gear like nothing else. Built to last, the Patrol 35 wins for so many reasons, Bravo Mystery Ranch.

Mystery Ranch designs high-performance packs for the hunter and mountaineer and the firefighter and military personnel. Hand made in Bozeman, Montana, the pack and load carriage systems are designed with comfort, quality, function, and durability in mind.

The owners of Mystery Ranch, Dana Gleason and Renee Sippel-Baker, have worked together since Dana hired the latter in 1978. In 1985 they founded Dana Design Packs which soon garnered a cult following among pack geeks. In 1995, the two decided to sell the company to the K2 Corporation. While it was originally meant to be an early retirement, it turned out to be a short hiatus and before long Dana and Renee were back in business.

Mystery Ranch was officially founded in 2000, and after being approached by the Navy SEALs in 2004, they began producing backpacks for high-level clientele in the military and firefighting. This change in market allowed them to test products in more extreme environments and provided valuable feedback that has influenced all their product lines since. This year they are adding a new line to the ranks; Ski packs.

Give the following video a watch as sales manager Ben Noble walks you through the features of the Mystery Ranch Patrol 35 Pack. 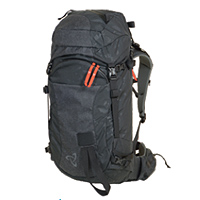 SHOW THE REST OF THE REVIEW / PHOTOS / VIDEOS
How much gear can the Mystery Ranch Patrol 35 Pack hold? Well, everything you see below, and then some. 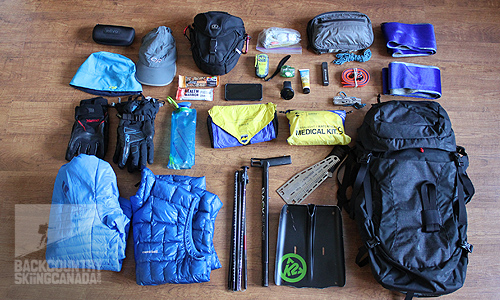 The Mystery Ranch Patrol Pack comes in two sizes, 35L and 45L. It’s designed for comfort when the days are long, and allows for quick access to main pockets when you need to be fast. The bag features both diagonal and A-frame ski carry modes and all the pockets and compression straps one could want. 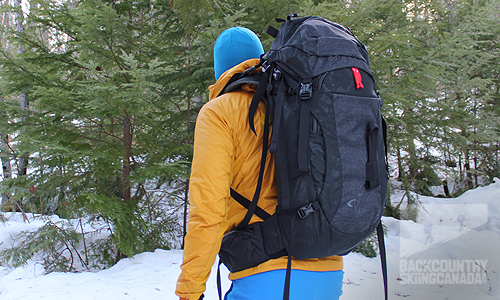 The “avy pocket” has sleeves to keep your probe, snow saw, and shovel handle organized, and is positioned on the bag so that it’s always accessible. The avy pocket also features an inner pocket for your snow study kit. The pack’s main pocket can be accessed via the top loading shroud, but is also easily accessible through a Rip-Zip body panel. Using just one of the body panel zippers, it can be accessed through the side when the bag is being worn, or fully opened with both zippers once when the bag is removed. The lid of the bag features two zippered pockets, one for goggles, and one for accessories. The hip belt also has a zippered pocket, one on each side.

Avy tools pocket with plenty of room for Shovel, probe and saw. 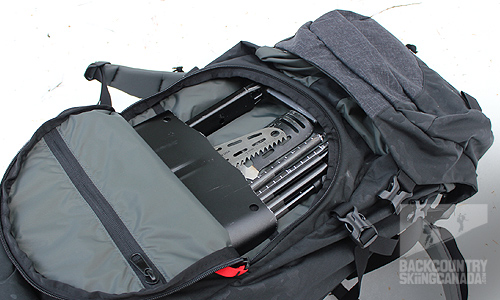 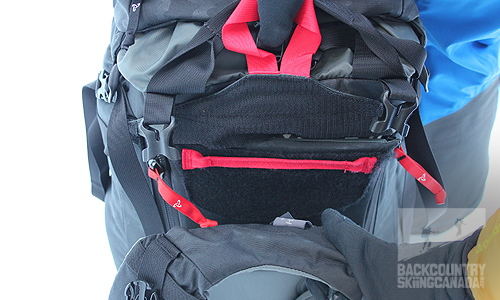 A carbon fiber frame allows loads of over 50lbs to be carried comfortably, and the internal frame includes a telescoping yoke to custom fit any torso. The pack’s panel materials were selected for their ability to shed snow and for their resistance to tears and abrasions. 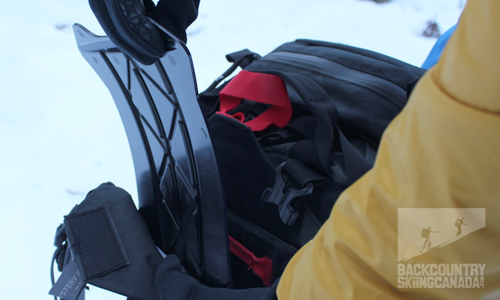 A look at the  Mystery Ranch Patrol 35 Pack with the back panel access open and fully loaded. Beside that, the diagonal ski carry. 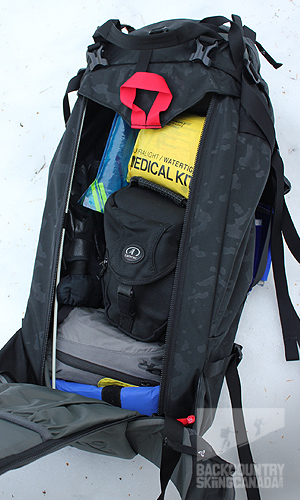 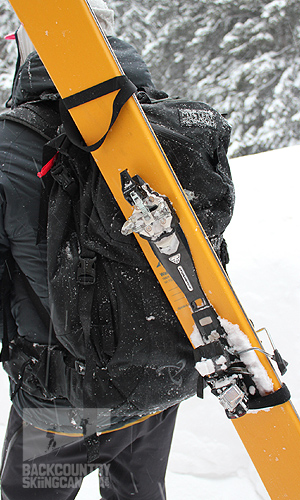 The helmet carry pocket does double time as a skin pocket and wet locker. 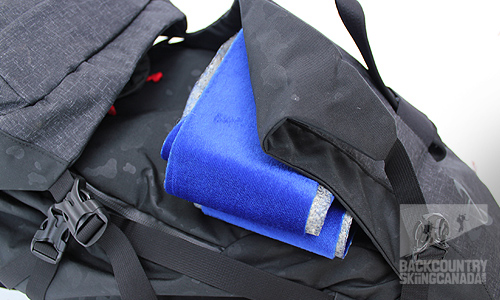 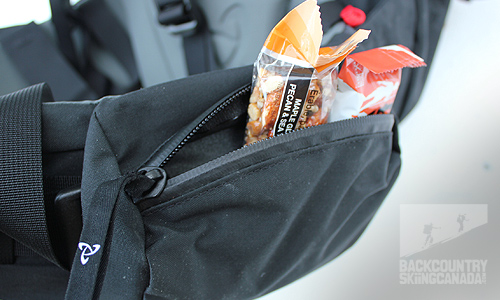 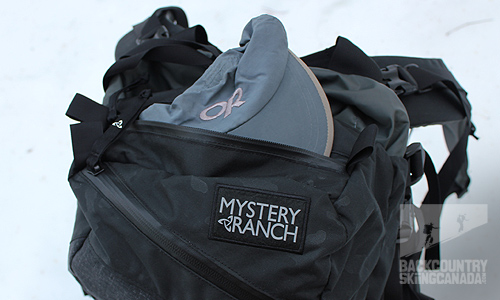 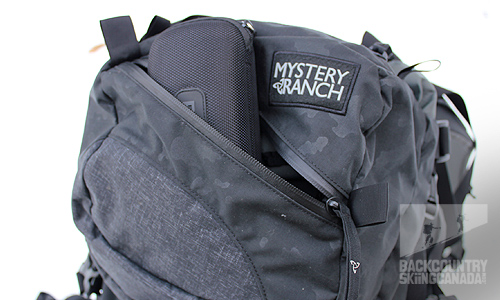 If there’s one thing I like in a ski touring backpack, it's lots of pockets; the Patrol 35 Pack has pockets inside of pockets. It also has compression straps for days! You can fit a lot in the pack and then keep it tight to your body. The adjustment straps on the hip belt harness are well placed for quick and easy adjustment without taking the pack off. The way Mystery Ranch has designed the telescoping yoke for custom torso fit is simple yet ingenious and a really cool and easy way to properly fit the pack to anyone. Foremost the Patrol 35 pack is incredibly comfortable, feels solid, and the design reminds me of a high-end trekking pack. On the whole, the Patrol 35 Pack feels incredibly good on your back and leaves very little to complain about.

I got a sneak peak at the Mystery Ranch Patrol 35 Pack in March while is touring with some of the Mystery Ranch PR, sales and marketing folks out at the Woody Creek Cabin in Cooke City Montana. We spent three days ski touring just outside the Yellowstone Park boundary. Snow and lots of wind greeted us each day as we notched up 5-6,000’ vert. Carrying extra cold weather gear, sleeping bag, personal clothing and a DSLR camera was no problem for the Patrol 35 with room to spare. The weight while not super heavy was still above what I’d typically carry for a ski touring day unless I was on a traverse and then I’d opt for a 65L pack but the Patrol 35 did surprisingly well. No sore spots on my hips and my shoulders were surprisingly comfortable after the approach to the hut. The days following saw a lighter, trimmed down version of the pack contents and this is where I was able to synch things down for the smaller load. Gear was accessible and snow shed well considering how much we received over the course of those few days.

My only real complaint of the Patrol 35 would be the ski/snowboard carrying systems. The bag has both diagonal and A-frame ski carry options, and they work just fine; but the bag lacks a solid snowboard carry option. You could put a splitboard in ski mode to mount it onto the pack like skis, or a vertical mount is possible if you want to get creative with the compression straps, but it doesn’t seem like it was designed to carry a solid board.

Other minor points include the diagonal ski carry loop which is appropriately beefed up, but its placement on the bag makes it stick out on an otherwise streamline pack. I was also initially skeptical of how bulky the helmet carrier is, and one could argue that things could fall out the sides (especially if it was something other than a helmet being stored in there).  After touring with the Patrol 35 Pack, however, my skepticism was put to ease and I ended up using this feature more than I ever have in the past. The bag does not come with a hydration reservoir, though it is compatible and Mystery Ranch sells them separately, though the shoulder straps do not feature an insulated hydration sleeve.

All in all, the Patrol 35 Pack is a super solid pack with tons of well thought out features. It’s slightly more expensive than other bags of similar volume, but the materials used are of high quality and well suited to their purpose. If you have never shouldered a Mystery Ranch Pack, do yourself a favour and see what all the talk is about. You’ll quickly learn why Dana’s packs are so revered the world over.