Robert Workman, the founder of Goal Zero, was inspired to help people out of poverty after he visited the Democratic Republic of the Congo in 2007. He wanted to teach impoverished people to run sustainable businesses within their communities, so he started TIFIE Humanitarian (Teaching Individuals and Families Independence through Enterprise). After struggling with many obstacles, he changed his methods in order to better accomplish his goal. He and his team began to create simple tools which would allow communities to create the income opportunities they needed. By 2008, they were testing their first portable solar power pack, the GoBe, consisting of a battery, solar panel, and an LED light. The GoBe, which is now the Goal Zero Yeti 150, provided power to villagers and literally empowered economic opportunities.

Goal Zero became a business in June of 2009 with the mission of empowering people by giving each and every person access to reliable power. Their mantra of “Zero Apathy, Zero Boundaries, and Zero Regrets” emphasizes the way in which their business is run. The company produces a variety of products including portable phone chargers, solar generators, portable solar chargers, portable solar panels, all kinds of accessories, and small, medium, and large solar kits. Though their products were originally designed to help those who need it most, they are equally relevant to those who are well off, be they adventurers, explorers, athletes, photographers, or travelers. 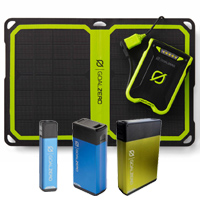 Just a few of the many Goal Zero products. 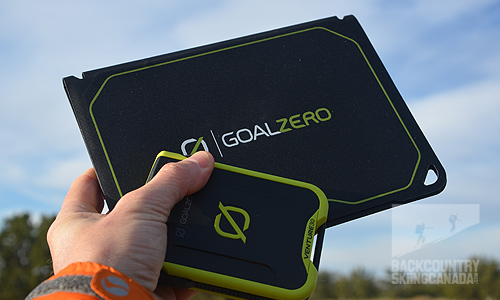 In August of 2014, Goal Zero was acquired by NRG Energy with hopes of further accomplishing the goal of providing reliable energy to everyone, everywhere.

Goal Zero continues to work together with other organizations in order to further their humanitarian efforts. The Goal Zero Nation has donated and contributed almost one million dollars’ worth of portable power, solar panels, and lighting kits to victims of natural disasters around the world.

The Nomad 7 Plus is a portable power plant that will allow you to charge your electronics off the grid, and on the fly. Unlike most power plants, this one weighs less than half a kilogram and can fit into your bag or glove box. As long as the sun is in the sky, you can charge your battery pack, phone, or other USB devices for free! While a portable recharger such as the Venture 30 or one of the Flip series (reviewed below) may be better suited for the day bag, where this panel will shine is on multi-day trips.  If you don’t want to stay put while your electronics charge, the panel has flexible eyelets that make it easy to tie it to your backpack, and a mesh pocket that you can zip small devices into so they stay ventilated and stay put. 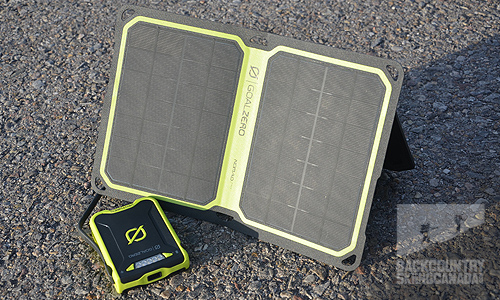 The Nomad 7 PLUS features intelligent electronics that optimize output power to match each device it powers and a dynamic auto-restart. Basically, the auto-restart means that if charging is interrupted, because of a change in weather for example, that the charge will continue should ideal conditions return. Without this system in place, higher power devices like smart phones and tablets would reject the charge if there was a power interruption (such as a passing cloud) as they require specific and consistent power. Using a battery pack (such as those reviewed below) as an intermediary is still suggested for the best charging experience, as batteries will never reject a charge.
In terms of durability, the packaging boasts “rugged, weatherproof layering”, and the Nomad looks and feels like it will live up to the claims. When using or transporting the Nomad®, I was never worried about scratching or damaging the panel in any way.  Magnets keep it tight when folded so it will stay compact when stored. 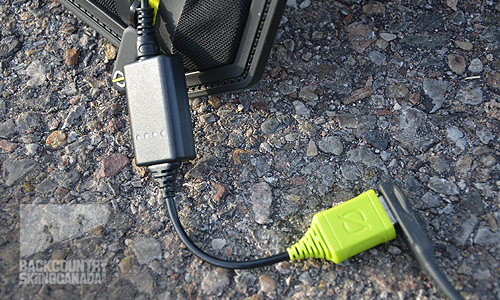 The back of the kickstand has an integrated mesh pocket. 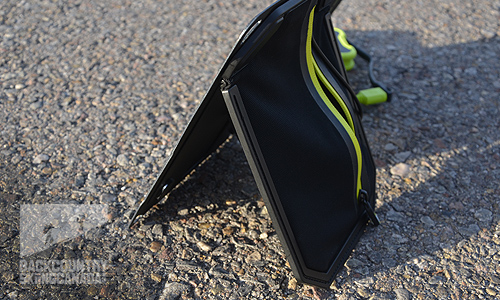 Going to be in one spot for a couple of hours? The panel has a “kickstand” and a simple LED indicator which allows you to adjust the angle of the panel in order to maximize power generation. The kickstand also acts as a shady shelter for the device(s) being charged.

Its compact, weatherproof design means you can easily fit 7.8 Ah of backup power into your back pocket, and not worry about sitting in a puddle.  When you’re done with the puddle, leave it in the rain or take it to the beach, because it’s been engineered to handle the elements (doesn’t even need rubber plugs to cover ports, it’s good to go as is). The IPX6 rating means it is as close to being fully water proof as it can be, but it still lies in the water resistant category. To expand on that, in order to achieve an IPX6 rating, it still worked after it had been blasted with high-powered water jets from any direction.

The Venture 30 recharger is ready to power phones, cameras, tablets, and anything else you can charge with USB or Micro USB. The packaging says that it works with Apple, Android, and Windows devices, but I was able to charge devices of other makes with no issues.  Dual USB ports allow you to charge 2 devices at the same time. 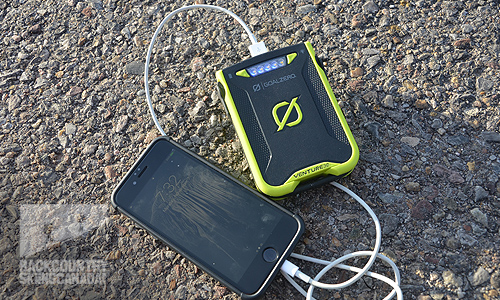 To charge the Venture 30, the built-in USB cable can be plugged into a computer, a wall or car USB adapter, or the Nomad Solar Panel (reviewed above). On a full charge, it can recharge a headlamp 5 to 10 times, a POV camera 5 times, a phone 2 to 3 times, or a tablet once.

A built-in flashlight comes in handy at times. 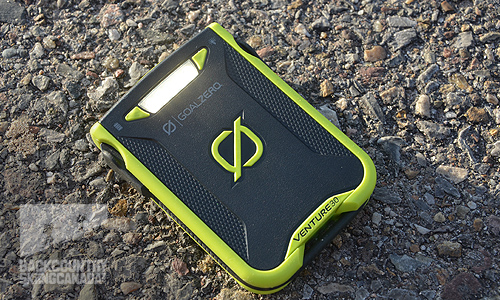 Designed for those of us who don’t have time for tangled cords, the built-in Micro USB cable tucks away tightly and securely.  There are only two buttons on the Venture 30, one to check available power, and one to turn on a 65 lumen flashlight. When checking the power, you simply press the appropriate button and an array of 5 LEDs light up to indicate the approximate charge level.

More compact than the Venture 30, the Flip 10, 20 or 30 are better suited to charging devices with lower power needs. Phones, POV cameras, mp3 players, and head lamps can be charged multiple times with these devices.

In order to charge the Flip 10, 20, or 30 simply flick the USB adapter out and plug it into any USB port without the need for any cords. Fully charging the Flip products takes about 3-5 hours (depending upon which version you use), and with that it can charge a phone one to five times (this is approximated, not every phone is the same, so there will be small variations). “Pass-through charging” allows you to charge both the Flip and a device simultaneously. 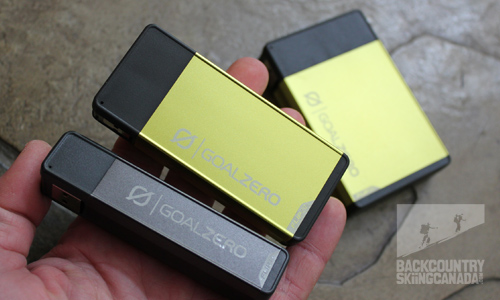 The Flip series are not as rugged as the Venture 30, so keep these out of puddles, but they are definitely still durable. The Flip gets its name from the USB plug which “flips” in and out, allowing it to be stored safely when not in use. This kind of articulation often makes me skeptical of durability, but the Flip series actually feels pretty solid!

Another feature of the Flip series is the LED indicator lights, which allow you to check how much charge is left in the battery. When the USB plug is in the stowed position, it can be pressed like a button. This lights up 4 LEDs which indicate the approximated battery charge level. 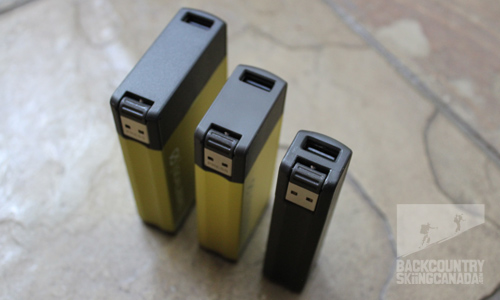 Articulating USB plug. “Press” the USB plug when it is in the stowed position in order to illuminate LED charge indicators. 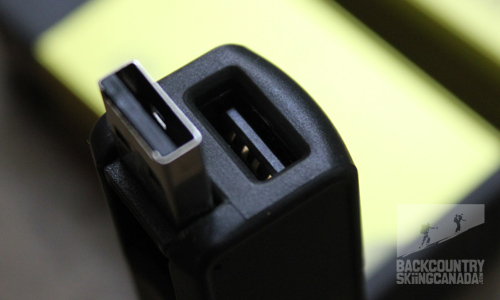 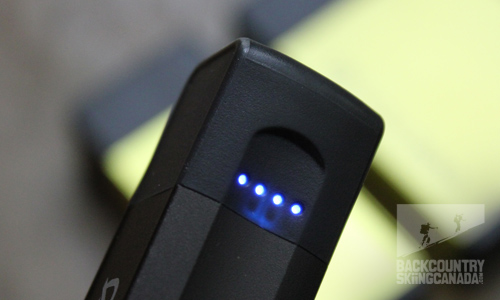 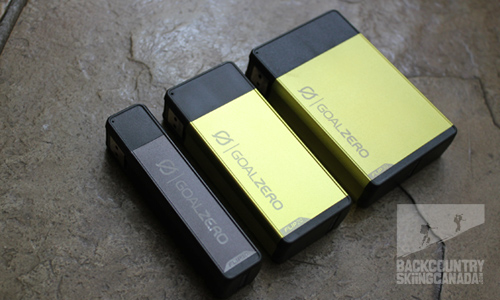 Li-ion (lithium ion) batteries are one of the most popular rechargeable batteries for portable electronics for three main reasons. Firstly, they have a high energy density, simply meaning that they hold more charge in a smaller package. Second, they have a low self-discharge. All batteries slowly discharge power, even when they are not in use; having a low self-discharge rate means that your battery pack will keep a charge for longer when not in use. Finally, li-ion batteries have a tiny memory effect. This means that partially charging or discharging a battery before discharging or charging will not affect future charge capacity. For example, other battery types, such as nickel-metal hydride and nickel cadmium, will gradually lose their maximum energy capacity if they are repeatedly recharged after only being partially discharged. The battery basically remembers the discharge and recharge capacities, and adapts to the smaller capacity; this is not an issue with lithium ion batteries.

There are many types of li-ion batteries, one of which is NMC. NMC refers to nickel magnesium cobalt. These batteries have a lower energy density than other li-ion batteries, but they are safer and have a longer life span. Li-ion NMC batteries are popular in electric tools, medical equipment, and automotive applications

The Nomad is my favourite of the products reviewed because it allows you to be fully removed from the grid. As someone who likes taking pictures, battery life is a real concern. I almost always carry an extra battery, but if you’re not being conservative with usage, it’s not hard to drain a battery or two. Being able to charge up my camera in the backcountry is a huge bonus, and alleviates any pressure concerning battery conservation.  Speaking of batteries, if I was taking the Nomad into the backcountry, I wouldn’t take it without the Venture 30. Being able to store power is essential, especially when you’re counting on the sun to create it.
As far as the Venture goes, anything that is weather proof and can handle a drop is automatically in my good books. While it’s considerably larger than carrying an extra battery, the fact that it can power any USB device gives it a big advantage over a battery specific to one device. On top of that, not all devices have removable batteries, so carrying a spare isn’t always an option. Finally, the flashlight is actually really good, and I feel like you can never have too many flashlights.

The Flip series are pretty cool, and compared to other portable battery packs, you can store more power for the size and price. Like the Venture, they are handy in that they can charge any USB device. One advantage of the Flip series is that they come in 3 different sizes so you can pick the right battery pack to suit your needs. Other advantages they have over the Venture, as mentioned above, is the size and price. While these are critical factors, if I’m going to be in a situation where I would need back up power, and could not plug my device into a car or wall, chances are I would want the weatherproofing and ruggedness. That being said, they are still good at what they do, so if you’re looking for a cheaper option and you can keep it dry, one of the Flip series would be a sound investment.

See above for individual product specification.