If you've ever hiked or skied in Garibaldi Park, we bet you are wondering why a single, detailed scale backcountry topo map hasn't already been published for the area. We also wondered why. So, we made one. A really good one (we think so anyway) and it's called "The Garibaldi Park Map" by its fans. 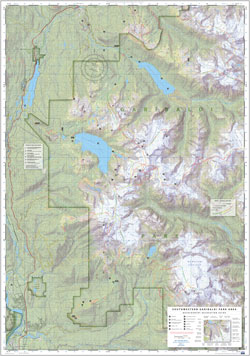 This is our flagship 1:50,000 scale topo map that launched the Bivouac Backcountry Series. It all started as simple idea to make a better map and has flourished into an award-winning cartographic statement. This multi-season recreation topo map, now in its third edition, was created for backcountry hikers and skiers using a combination of state-of-the-art satellite image processing methods and high-mountain cartographic techniques and we think you'll agree that the results are stunning. This innovative topographic map series is sure to get you to where you want to go - and back!