G3 has always had an impressively simple yet visually appealing design for all their products, be it their skins, poles, packs or bindings. Functionality, durability and ease of use are always at the forefront of their product design, however, overall aesthetics never trail far behind. This could not be more true of the new Zed binding. This lightweight tech binding has more shelf appeal than any binding on the market but also backs this up with solid on hill performance and usability that shows the design engineers were really thinking about the end-user and what they want. 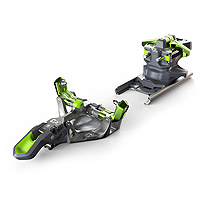 Like the Ion's, G3's Zed binding is a thing of beauty and of course performs just as well yet weighs less. 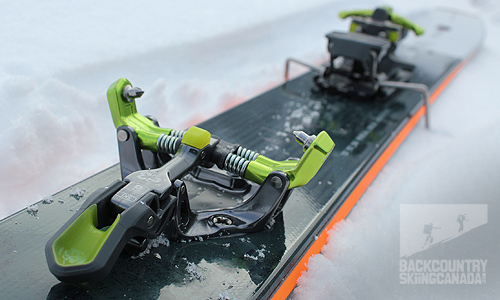 Four seasons ago we reviewed the Ion 12 Bindings followed a year later by the lighter Ion LT 12 Binding which did away with the brakes in favour of a leash retention system. The development of the Zed Bindings took all that G3 had learned on Ion’s but they set out to reduce its overall size and weight. The result was a binding which maintains the functionality and performance of the ION (and in some cases improves upon it) while reducing the weight by a respectable 227g (brakes will add 87g and reduce this savings to 140g). With a per binding weight of 358g / 12.6oz (without brakes), the Zed’s qualify as the lightest fully featured tech binding on the market. They also possess the same bomber-proof design and dependability as the Ion's so you give up nothing but weight. 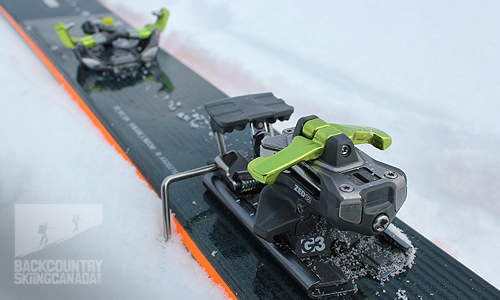 If you are at all confused as to the differences between the Ion 12 and new Zed bindings then watch the following video which will help you determine which binding is best for you:

G3’s Zed Bindings were introduced to skiers last season but like all first-generation products some upgrade have been made for this season’s version. G3 has increased the strength in some parts and materials of the binding while also refining subtle shapes and generally improving the overall performance and user experience. The heel piece is now stronger and the stomp pad is no longer required to ski brakeless. The top cap screws have been extended and there is a new grill design on the front of the heel turret for increased durability. An improved brake fit and finish has also reduced the amount of play found on the initial version while a stiffer forward pressure spring improves uphill touring with the heel lifts. 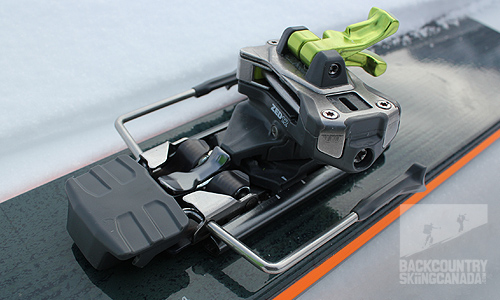 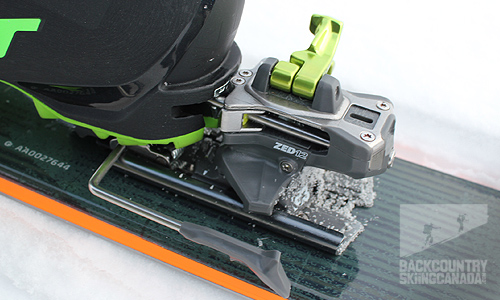 The ZED’s toe piece weight has been reduced by 64g by using less metal and now weighs 125g compared to the ION’s 189g. This also sits the toe piece closer to the ski while maintaining the same overall geometry and function of the ION toe piece. G3 also made the ZED’s toe bumper smaller and lighter and increased the height of the pivot point to make snow and ice clearing easier in addition to providing a higher holding force of the toe pins. 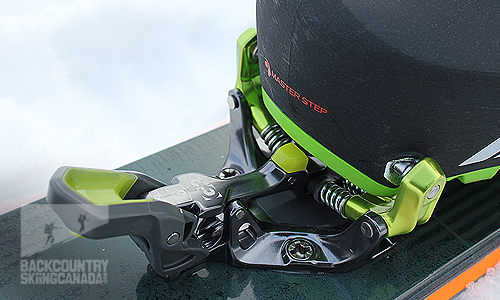 On the heel piece, a total of 76 grams was saved when compared to the ION’s and this is with the brakes included—remove those and you save a further 87g. You can also now adjust both the vertical and lateral release values of the heel with a single screw, unlike the two screws found on the Ion’s. By adjusting this you can obtain a full 10mm of ski flex compensation, and 30mm of boot length adjustment. Like the ION, the Zed uses independent heel pins which are able to rotate during step-in and release which minimizes wear on the heel inserts on your AT boots and provide a more reliable release in the event of a fall. 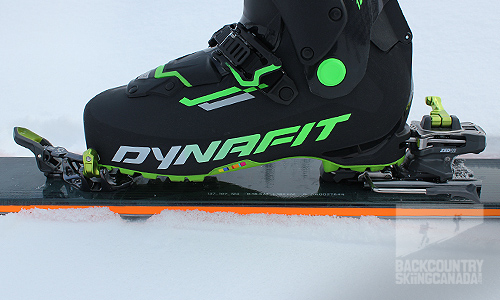 Lets take a look at the riser levels now, starting flat and then with the risers building upon themselves. 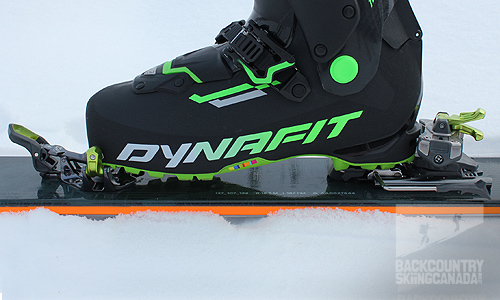 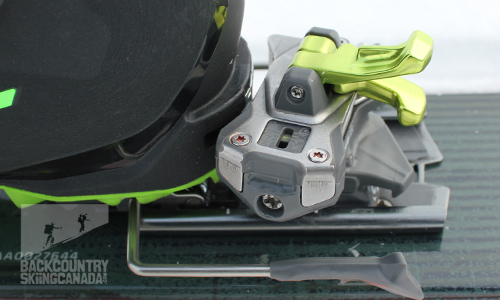 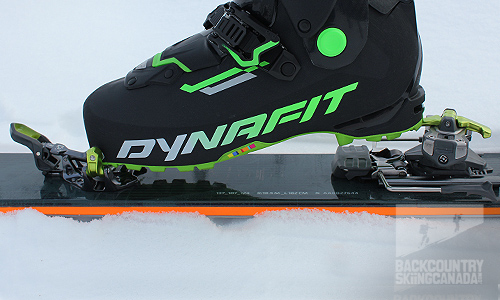 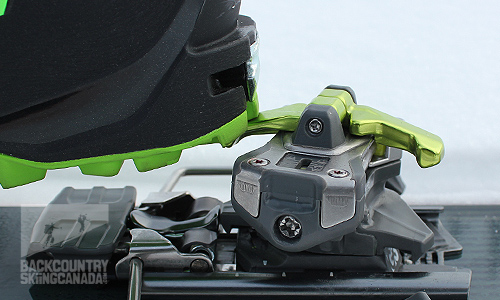 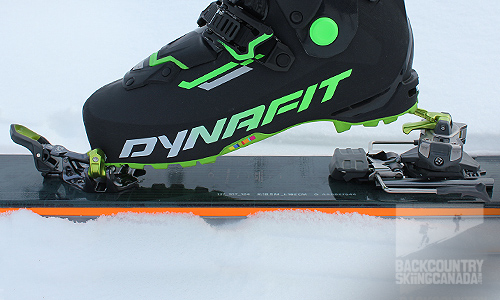 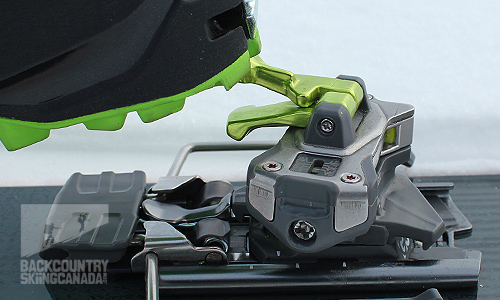 G3 continues to push the boundaries of what a fully featured tech binding is capable of and with their new Zed binding, this means a lighter and more compact solution. When you consider the Ion weighs only 585g it is pretty impressive that G3 was able to squeeze a further weight savings of 140g which equates to almost a 24%. Go brakeless and you can shave a further 87g or 15%, but you should then use the included leashes to ensure that your ski does not run away after a release. Keep in mind though that the $549 Zed price tag while $64CAN cheaper than the ION’s does not include brakes which will set you back another $95CAN, so at the end of the day, the Zed’s are actually $30 more than the Ion’s. While you may think that you are paying more and getting less, you’ll quickly realize that the additional $30 is well worth the weight savings.

Like the ION’s, the Zed’s have a generous space under the toe pieces which facilitated snow removal should it build up and given the higher pivot point and firm clamping power ice was never an issue in my testing.

Although you can certainly buy lighter tech bindings you won’t get the same adjustably and safety features built into the Ion and although these benefits come with added weight, it is minimal overall. The fact that both the Zed and ION’s use independent heel pins are a huge plus if reliable release and minimizing wear on you boot inserts is of concern to you.

Skiing on the Zeds was quite the same as skiing on the ION’s, no pre-releasing and a nice solid feeling which instills confidence to ski a little more aggressively. The built-in forward pressure and elasticity performed as it should and there was never a point at which I questioned or doubted the ability of the Zed Bindings. Although I would not recommend using the Zed’s for everyday resort skiing you could totally get away with it on occasion. If the primary focus of your skiing is backcountry then the Zed is the most full-featured, lightest binding you can buy. So it looks like good things do come in small(er) packages after all.