Mohair, synthetic and blended fibres all have their own unique grip/glide properties when it comes to climbing skins, and backcountry skiers are polarized into several camps as to which is the best option. There’s a new contender in the climbing skin market that falls into none of these categories: the Fischer ProFoil. Notice that Fischer doesn’t even call the ProFoil a skin. That’s because it’s not. It’s a piece of textured plastic that adheres to the base of your skis just like a skin, except there’s no hair involved, of any kind. Think cross country fish scaled pattern, and you’re on the right track. In fact, Fischer developed the ProFoil through what they learned from years of perfecting the technology used in their cross country skis. 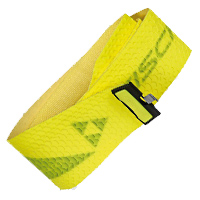 Traditional nylon and mohair skins have friction when they glide, and collect snow and water throughout the day which adds considerable weight (they need to be dried after each use). The ProFoil, on the other hand, glides like a ski and doesn’t absorb moisture which avoids “glopping”, or the accumulation under your skins when the snow turns warm and wet.

With a texture like this, it's no wonder they grip so well. 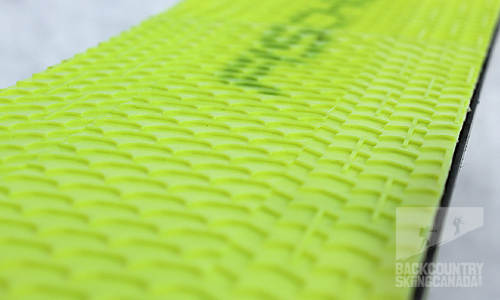 Thanks to the low-friction-coefficient of the ProFoil base material it’s said that you can lengthen your stride by up to 20%, which theoretically means improved efficiency and less energy output. However, just because they glide better than traditional skins that doesn’t mean they sacrifice grip when climbing. Fischer’s “Crown Grip Technology” means the scales are arranged in a crown pattern which maximizes grip, and not in a traditional perpendicular pattern. The ProFoils also fit your skis differently: unlike traditional skins which leave the ski’s edges exposed, the ProFoils fit edge to edge to provide even more grip and glide.

Fischer has also developed a unique attachment system which they call the “Fischer Fast Fix”. This is an ultra-simple and effective attachment at the tip and tail which adds minimal weight and doesn’t affect the speed at which you can attach and remove the ProFoils—even if you wish to perform the fancy skin-peal method while leaving your skis on.

Currently, the ProFoil is only available for Fischer skis in a pre-cut format, so you won’t be able to try them out on your current ski set up. That is until next season, when Fisher will allegedly be offering them in a customizable version for any brand of ski. Because this is a departure from traditional skins its important to learn how to use them properly. Watch that video at the bottom of this review and below watch the video overview from the SIA show:

- Crown Glide offers 20% longer and faster stride due to the lower friction coefficient of the ProFoil base material.
- Crown Grip provides maximum grip in all types of snow conditions.
- Doesn't absorb water and therefore will stay dry in all conditions and remain lightweight.
- No drying required after your ski tour.

The tip clip is simple and genius. 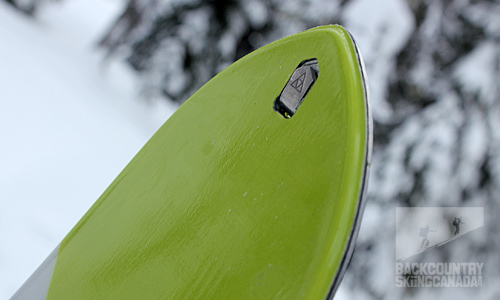 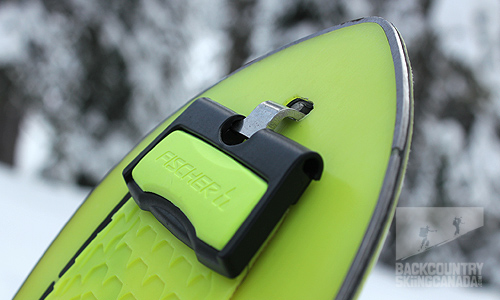 The tail clip is robust and functional. 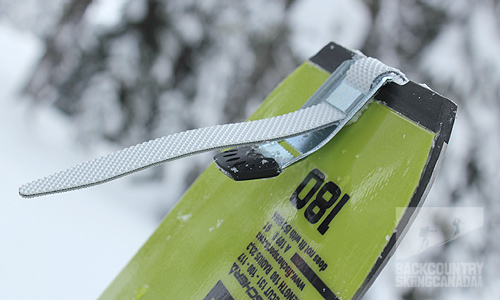 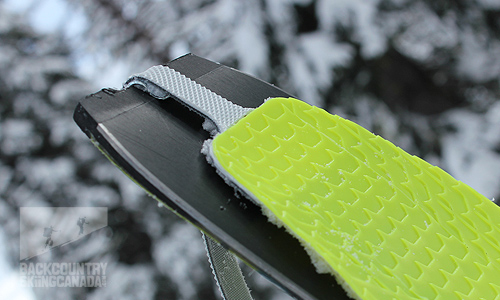 I applaud any new innovation, even if it isn’t 100% successful right out of the gate. The ProFoil is by all accounts a truly innovative product, and also (in my opinion) a very successful one. It’s one of those “why didn’t someone think of this sooner” inventions. Not only do the ProFoils provide more than enough grip and glide, they pack down smaller and don’t weigh as much as traditional skins. In my testing, the ProFoils weighed 563g for the 95mm underfoot version, which had been pre-fitted for the Fischer Hannibal Skis. A comparable, traditional Black Diamond skin weighed in at 793g, while my glueless Evotec skins (the lightest skins I have used to date) came in at 580g. That’s a nice chunk of weight savings: approximately 230g over a traditional glue skin or roughly a 30% savings.

I tested the ProFoils over several backcountry ski days around Whitewater Ski Resort here in the Southern Selkirks, where I encountered fresh powder and compact skin tracks. I didn’t, however, encounter any extremely cold temperatures or solid snow/ice. These are two variables that I cannot factor into my assessment of the Profoils: how they would grip on ice, or how the glue will hold up in very cold temps. I can say that the ProFoil, like traditional skins, did have some slip on steeper skin tracks and under certain snow conditions. But I did find that stamping the ski and ProFoil into the skin track (much like you would with a traditional skin) provides increased traction and grip. I also did some testing on really steep snow slopes in order to make the ProFoil purposely lose traction and slide back down the slope. Not only did the ProFoil hold a little longer, it didn’t slip down the slope nearly as far, leading me to conclude that the ProFoil offers better traction than the traditional skins I used as comparison.

I really like the fact that I don’t have to dry the ProFoils overnight after a day of ski touring—a simple shake and wipe down removes any excess moisture. And since the polyethylene construction doesn’t absorb water, it keeps them light and also eliminates any glopping. I also liked that the ProFoils packed down smaller than traditional skins, leaving more room in my pack for other things.

The only real downside to the Fischer ProFoils is that you have to use a separator sheet to ensure that there is no glue-on-glue contact, otherwise the glue is compromised. Again, watch this video to ensure you know how to use the ProFoils before your first use:

The separator sheet is a bit of extra work to use, and it’s also likely the skins might get lost because the sheet is small and clear in colour. A bright yellow sheet would be easier to spot when it’s sitting on the snow. However, it won’t solve the issue of the separator sheet being blown away in the wind if you are not mindful.

Overall, the ProFoils are an innovative, easy-to-use, lightweight/packable alternative to traditional climbing skins. I would highly recommend considering them if you are in the market for new skins. (I reviewed the Fischer ProFoils on the Fischer Hannibal 100 Skis, for that review click on over here.)

Packability is one of the ProFoil's strengths. 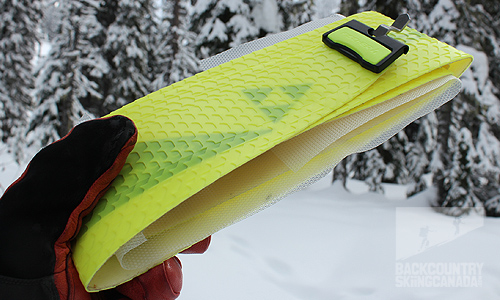 Well, the rumours are true; Fischer now makes ProFoils that fit ski brands other than exclusively Fischer. This opens up the market for the Profoil, and will give more people the opportunity to try them on their existing AT setup. Fischer sent me a pair, and I quickly got to work cutting them to fit my Volkl V-werk BMT 109 skis. Trimming the Profoils is the same as trimming any skins, you just need to apply a little more force to cut through the plastic material. But since you can trim them edge to edge it’s a pretty straight forward process. Fischer includes a plastic utility knife (which is a little flimsy for the job) so I used an all metal knife that could better endure the added forces I’d be exerting on it. There are four widths to choose from, and up to five lengths within each width option, so you are guaranteed to find a Profoil that works for you.

Tip 'cobra' connector front and back. 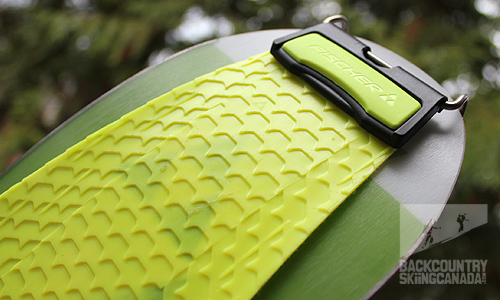 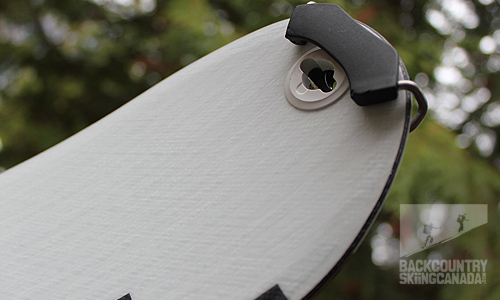 Tail 'i-clip' connector front and back. 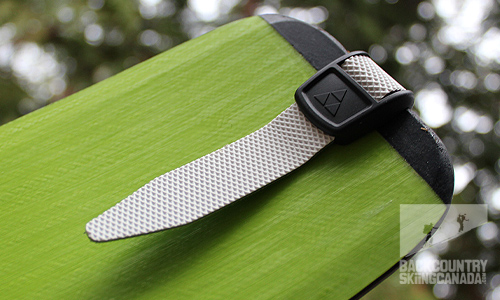 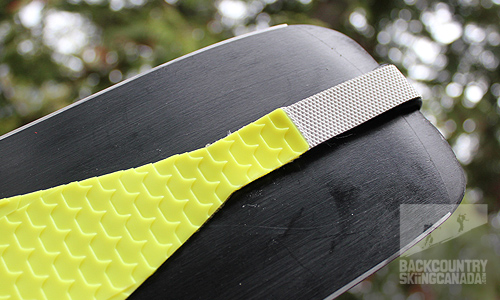 Be sure to use the protector sheet every time you fold up the Profoils, otherwise you'll quickly ruin the glue. 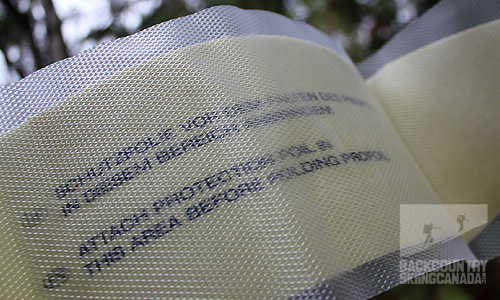 Once trimmed, the Profoils work the same as mentioned above in the full review, the only difference being that the tip and tail connectors now work with any skis. Located on the tip of the Profoil is Fischer's 'cobra' attachment device, which is a simple bail design. The tails feature a standard clip attachment; Fischer calls this an 'i-clip' and makes it out of plastic. Both the tip and tail clip are simple in design and seem robust enough to last for many seasons.

Although the Profoils are considerably more expensive than traditional mohair or nylon climbing skins, their benefits should justify the added cost. I’ll be running these new custom-cut Profoils for the duration of the season, so be sure to check back for my full report on how they performed over the long haul.

Below you can see the attempt at making the ProFoils work after the glue had failed. I had to skin over a ridge to get back to the resort, it was not fun. This day it was -15°C and the glue completely failed, even after re-warming they failed again. So far I've had nothing but success on milder days be be wary on very cold days. Even keeping the ProFoils warm in my jacket when skiing didn't help. 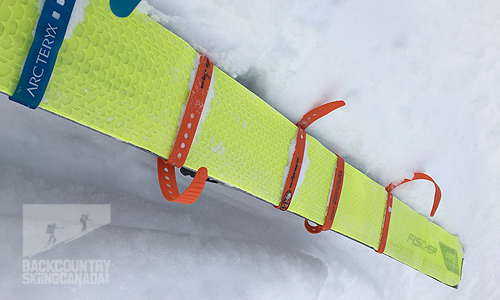 The low profile folded shape of the Profoils takes up less space in your pack. 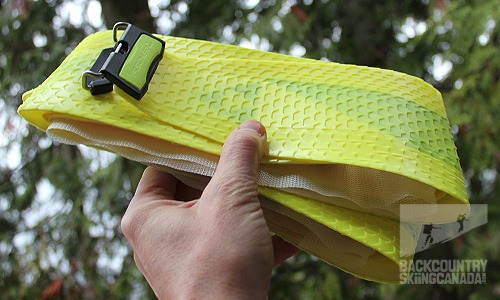