Burton Step On Bindings and Ion
Step On Boots

Burton is at it again, pushing the evolution of snowboarding with ‘outside the box’ technology. With the new Step On boot/binding interface, Burton is looking to offer convenience and performance in one package. Sure, it’s not the first time step-in tech has graced the snowboard industry, but Burton is approaching it from a new angle with the latest in snowboard technology. The Step On system in the photo below is mounted on the Burton Family Tree Dump Truck snowboard. 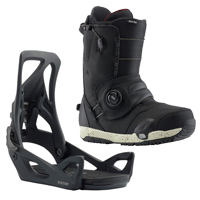 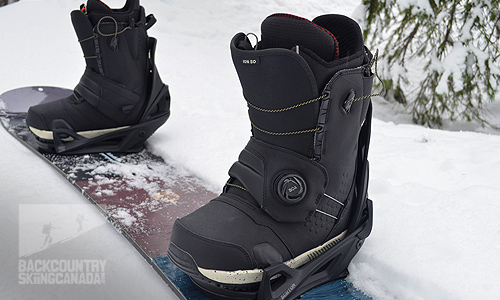 At a glance, one might not notice that these are not a traditional boot-binding combo, but upon closer inspection, the differences begin to stand out. The Step On bindings are strapless and as a result have a super low profile, while the Step On boots are only slightly bulkier than a traditional boot. 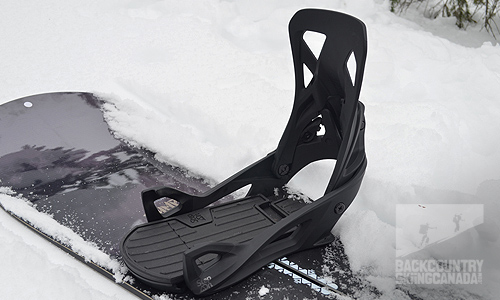 The Snugger Straps mimic ankle straps on a regular binding and allows you to adjust the heel hold, as well as the stiffness of the forward lean flex. This is controlled with the BOA Fit system, and the laces are Burton-exclusive New England Ropes. These natural fibre ropes ensure that the BOA system is durable/rugged and to prove this they are backed by a lifetime warranty. 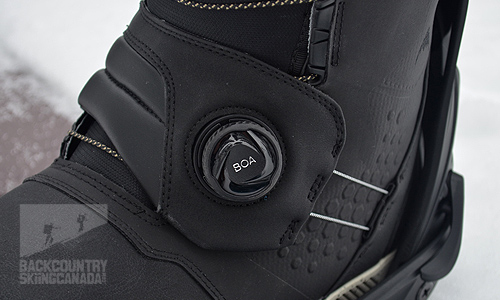 The Speed Zone Lacing System is a quick an easy way to tighten the Ion boots. One lace focuses on the lower, while the other on the upper. Tightening and loosening the boots takes no time, and the lace cleats hold the lace tight while you ride. Simply pulling up on the laces tightens, and pulling down and out removes the lace from the cleat so the tongue can be pulled out when undoing the boot.

Ankle support is provided by the Tuff Cuff which increases heel hold and inner cuff stability. Heel to toe flexibility remains uninhibited while medial and lateral ankle support is enhanced. 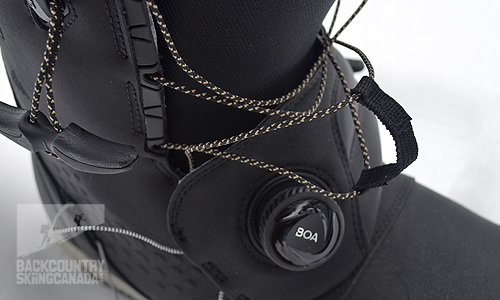 The Ion's Firm Flex PowerUP Tongue offers 1:1 flex to response for greater rebound and durability. Their dual density construction maximizes flexibility with a firm rebound to create a balanced response while you ride.

The Ion boot's Life Liner is made with lightweight foam that offers a relaxed feel while remaining both responsive and durable. The Ultralon Performance Foam is known for its thermoformability, resistance to packing out, and for minimal water absorption. The foam is then enhanced with DRYRIDE Heat Cycle inner-lining technology that increases warmth and moisture wicking abilities. Interwoven thermally activated carbon threads capture body heat and then radiate and reflect that heat inward, all while wicking moisture away from the feet. 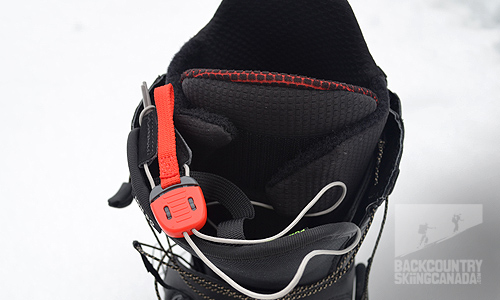 The outside of the Ion's are enhanced by Shrinkage Footprint Reduction Technology and an low profile EST Optimized Midsole. The lower profile and reduced ramp angle creates a lower centre of gravity and improves board feel while reducing weight. B3 Gel inserts make-up for any lost cushioning. The overall footprint has been reduced with Shrinkage technology to reduce weight and help eliminate toe drag. The outsole also contains recycled content to further reduce the boots environmental footprint. 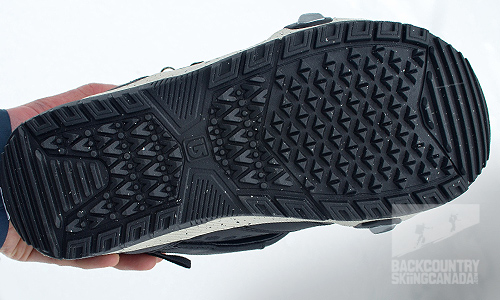 Toe and Heel Cleats are what keep the boot securely attached to the binding. The toe cleats protrude from either side of the toe, but still maintain a relatively low profile. These cleats slip into Toe Hooks found on each side on the binding baseplate. A subtle hinge in the hooks allow the rider to step in and out of the binding with ease, but is solid and hold the cleats in place when the heel cleat is engaged. 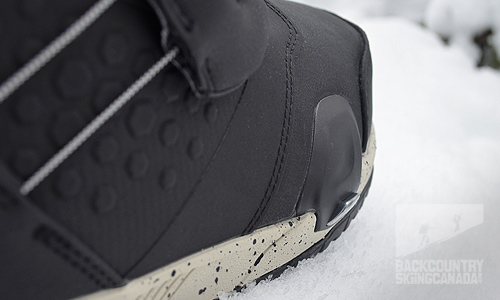 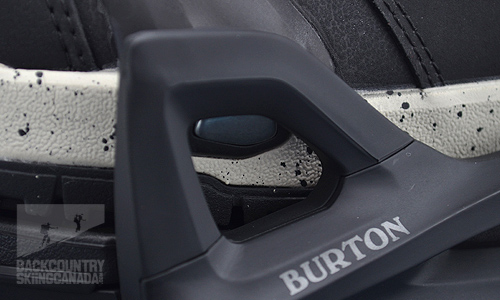 The heel cleat sits higher up on the heel and its design is reminiscent of the locking teeth found on a traditional binding buckle. The cleat offers two locking positions so that the heel can still lock down if there is snow or ice build up between the boot and the binding. The cleat also features a metal tab to keep your snow pants up and out of the way as not to interfere with the system. 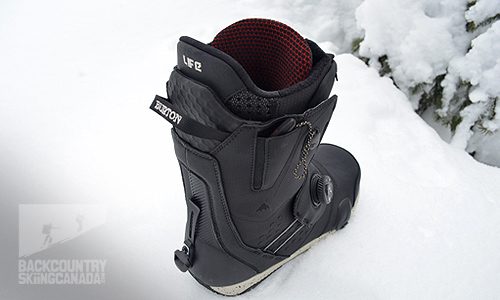 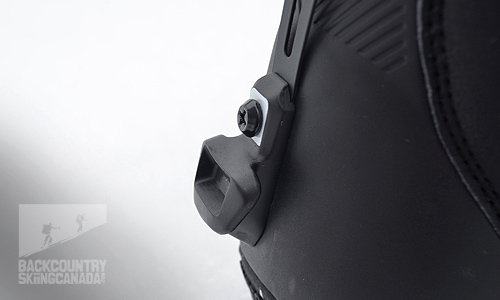 The heel cleat slides into the heel buckle utilizing Burton's own Smooth Glide technology to facilitate ease of entry. The buckle uses the same tech as a traditional ratchet buckle and is the primary means of retention for the entire system. 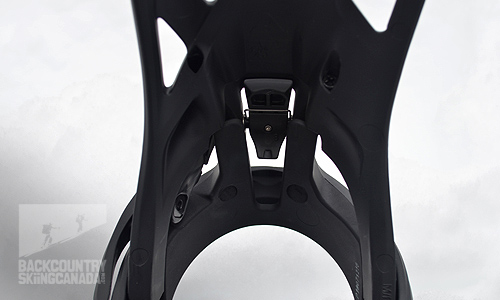 To release the Ion boot from the Step On Binding, a simple lever located on the heel cup can be pulled upwards, thus releasing the boot. The system automatically resets so that the rider can lock back in instantly. And don’t fret, the instructions in the above picture are just a sticker and can be removed at one's leisure. 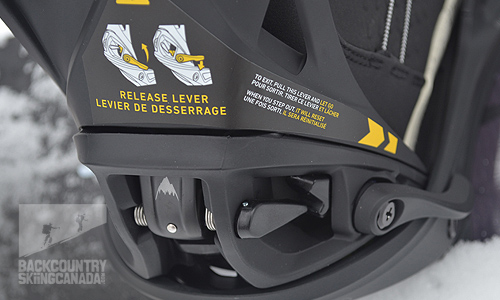 The Step On Bindings can be mounted to any board with the help of the Flex mounting system. This system includes two different pucks and a variety of screws that offers the flexibility to accommodate any mounting system. The Flex FullBED cushioning system offers comfort underfoot and can be flipped upwards to access the mounting hardware. 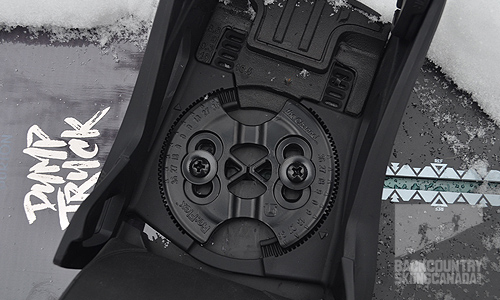 The Step On System also features a leash, so in the event of an unplanned exit, the board will not run away. 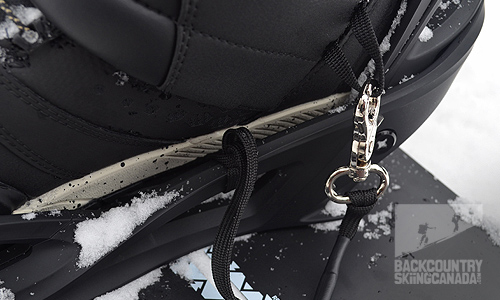 It’s about time someone gave this tech another go! While I have no issues with the classic ratchet strap systems, I know there are those who are excited about stepping into snowboard bindings. Stepping into the binding is certainly faster and more convenient than a traditional binding and you can get pretty good at stepping in as you disembark the chairlift without even having to stop. Not much time is really saved when exiting the binding, however.

I found the system, on the whole, to be fairly slick. The bindings are simple, have a low profile, and honestly look pretty cool. The boots aren’t hard on the eyes either but are definitely a bit bulkier than a lot of boots on the market these days.

Stepping in and out of the system is quick and easy. The first time I rode it I didn’t have the heel locked into the lower setting so I thought there was a lot of heel play, but after realizing I needed to step in a bit harder the play went away. The fact that they have included a higher setting to accommodate for snow and ice in the boot-binding interface is great but can be problematic when you first use them—it's just part of the learning curve.

Perhaps this is just a matter of personal preference, but I found the boots a little too stiff. I normally ride a mid flex boot, so it was a huge change to snowboard in such a stiff boot. I tried not having the Snugger Straps so tight in hopes that it would soften the ride, but it just felt like my foot was loose in the boot. Otherwise, the feel of the ride is pretty solid! I had a tough time trusting the system but once I got going, confidence started to come back. I still wonder about the Step On system for really aggressive/advanced riders, but for most, I think it would be just fine.

One complaint is about the packaging. At first, I saw it and thought “whoa, what a beautiful box… and it has magnetic closures!? Cool!”. But then the novelty wore off and I realized that it’s just a fancy shoe box. The magnetic closures are a neat touch, but the magnets embedded in the cardboard makes the box less recyclable, not to mention it seems super unnecessary for something most people will ditch as soon as the gear is put into use. Maybe the idea is to make the box so cool people won't want to throw it away? Anyway, I really believe that we should be moving toward packaging with less environmental impact.

Another complaint is the lack of cross-compatibility. As someone who is constantly switching boards and/or bindings in response to the conditions or plan for the day, I appreciate being able to do so easily. If I wanted to hit the resort in the morning and go for a tour in the afternoon, I would have to switch boots. If you have a pow surfer and a jib stick, you’ll need two pairs of Step On bindings if you want to be able to conveniently switch between the two regularly.

After several weeks of riding, I did notice a constant clicking noise coming from one of the boots where the Ion boot interfaces with the Step On Binding. It seems there is some play which makes this noise that was never there before. I'll be keeping an eye on this to see if it worsens or takes care of itself.

Overall, it’s a pretty cool system. While it may not be for everyone I can see why most people would be super excited by this new Burton Innovation. The system is solid, well thought out, and responsive, perhaps it's he snowboarder's equivalent of the tech binding for the ski world?