The Boardworks Shubu Raven Inflatable SUP is helping to make Stand Up Paddle Boarding one of the fastest growing summer sports. This board is easy to transport, easy to paddle and easy to master. Its design is ideal for beginners and advanced paddlers alike with all of the features you need to cruise flat water lakes or run a river. Durable, light and eye catching. What more could you want from this Gear of the Year Award winner?

The biggest question you have to ask yourself before getting into the stand-up paddle board world is: inflatable or hardboard? Luckily, Boardworks has you covered on both fronts with their Raven model, which is available in both a rigid and inflatable version. The award wining Raven hardboard was the inspiration for the Raven Inflatable SUP we’re going to talk about in this review. Boardworks has a background in designing and manufacturing surf boards, which positioned them to become a dominant player in the relatively new SUP scene. Give the following video review a watch to get a sense of what the Shubu Raven Inflatable SUP has to offer: 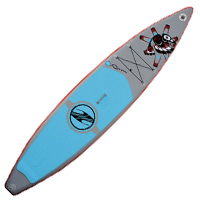 The Shubu Raven SUP is a long 12’6” board that’s 30” wide and slightly rockered at the nose, so it’s ideal for more advanced paddlers while still being easy enough for beginners. The Boardworks Shubu (“Show Up and Blow Up”) Raven is a relatively light inflatable SUP which weighs only 25lbs and is designed to be stable, versatile, and portable. Its durable, extra rigid 6″ drop-stitch construction can take just about anything you can throw at it; from river running, bouncing off rocks and even the occasional drop off the roof rack on top of your car (although we don’t recommend this).

The Shubu Raven comes with a high volume pump with an integrated pressure gauge, repair kit, detachable centre fin and flap pack. The high volume pump makes inflation possible in about 5 minutes, and the integrated pressure gauge ensures you achieve the required 14-18 PSI, no more, no less. Once the Shubu Raven is inflated you’ll need to attach the rear fin. The AIR7 fin box is compatible with standard longboards and touring fins, and is easily attached with a small nut and bolt that you simply hand tighten after positioning the fin into the groove. The built-in carry handle allows you to easily lift and manoeuvre the Shubu Raven’s 25lb weight and get the SUP into the water. If you are heading out for a prolonged paddle, the deck’s tie-down bungee system will help secure your gear to the deck of the SUP. Likewise, the diamond groove pad will keep you on the board as you paddle. There’s an integrated tail kick and arch bar at the back of the pad for support and control when you’re pivoting the board off the tail.

Once the paddling day is over, the Boardworks Shubu Raven Inflatable SUP folds up and fits nicely inside the Flap Pack provided. Since the Flap Pack unfolds and splays out completely, there is no need to try and cram and stuff it into a typically constrained back pack. The Shubu Raven packs down so small that you can easily check it as regular luggage on an airplane. The Flap Pack is also comfortable enough that you can transport it into mountain lakes and hike-in only beaches, unlike hard boards.

A great looking board with west coast native graphics. 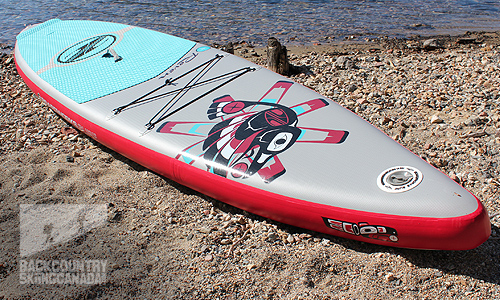 Some rocker on the nose to take on waveswith ease. 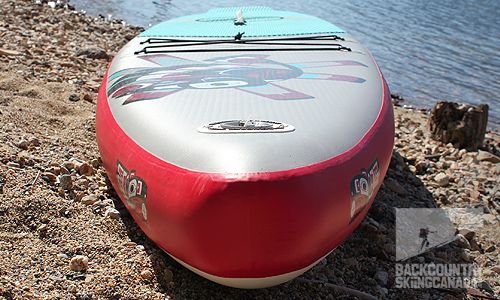 Six inches thick, so you have better stability than thinner inflatable boards. 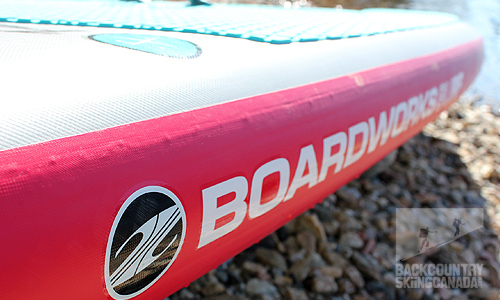 Just as beautiful on the underside. 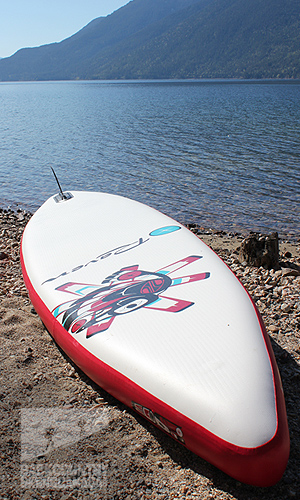 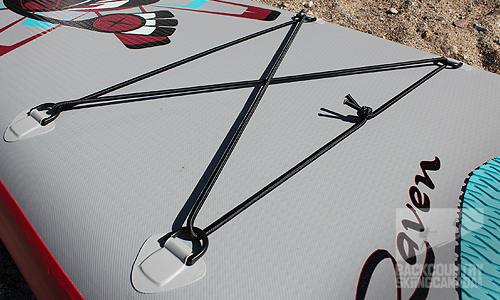 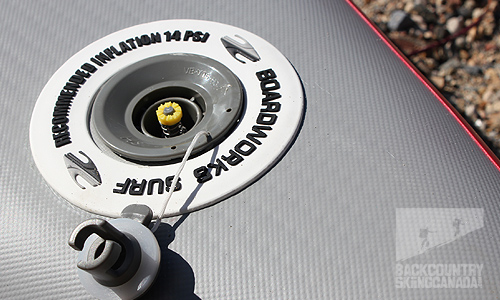 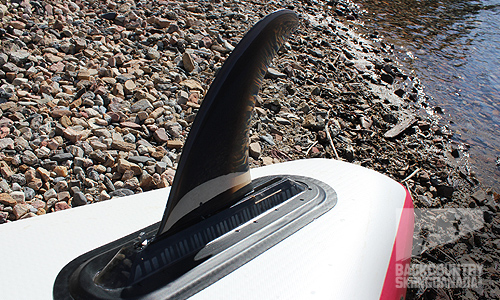 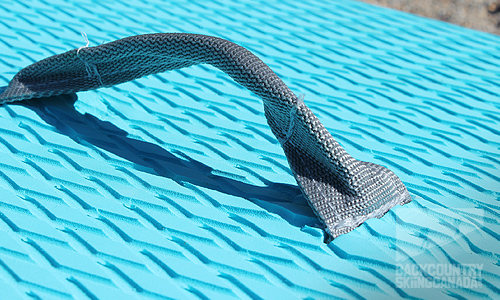 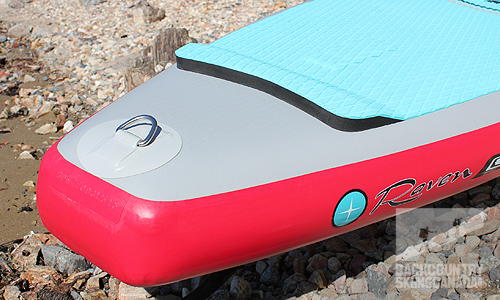 If you’re in need of a light-weight adjustable paddle for the Shubu Raven or any other SUP, then consider the Boardworks FGR Carbon Adjustable Paddle. FGR stands for “Flip It, Grip It, Rip It” which alludes to the leverlock adjustment system built into the ergonomically designed handle which gives you easy adjustment from 70” to 86″. Since it’s made of carbon it weighs in at only 567g / 1lb 4oz. The 8” continuous fibre reinforced thermoplastic (CFRT) blade provides solid paddling power and an impressive strength to weight ratio. The Boardworks FGR Carbon Adjustable Paddle is reasonably priced at $299CAN / $269US.

A nice aggressive blade to give you more power through the water. 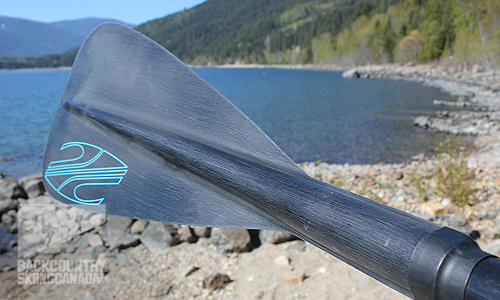 The adjustability is conveniently hidden in the ergonomic handle. 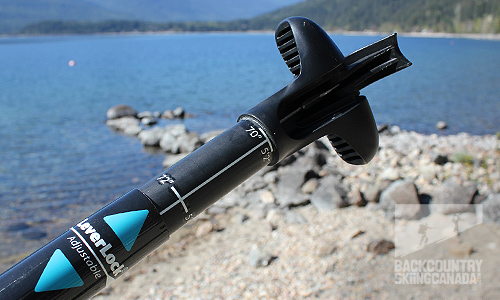 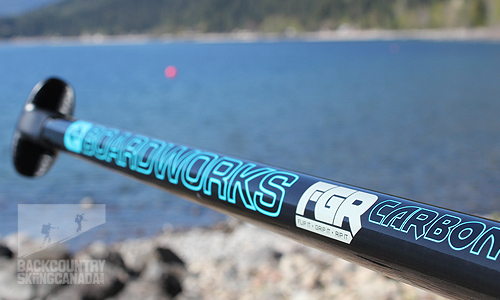 One of the things I like most about the Boardworks Shubu Raven Inflatable SUP is its dimensions. It’s long enough that it provides good glide, wide enough for beginners, and thick enough that it feels stable and reasonably rigid in all but the choppiest of water. On larger waves there was definitely some flex in the board, but nothing out of the ordinary for a 6” inflatable. The Sevylor Willow SUP that we reviewed last fall was a full 2 feet shorter and 2 inches thinner, so it had a less rigid feel and wouldn’t have paddled as effortlessly. Since the Sevylor is lighter by approximately 4 pounds and wider by 2 inches, it could be considered more of a beginner board.

Having paddled the Shubu Raven Inflatable in all types of water including flat water lake paddling, rolling waves, chop and river paddling, I’ve been more than impressed with how easy it glides and also how stable it is. My 12-year-old son was able to manoeuvre the Shubu Raven Inflatable no problem and didn’t dunk once. Even though it has a slenderer shape, it’s still ideal for beginners due to its surprising stability; You wouldn’t think it would provide this kind of stability when you visually compare it to fatter and shorter boards like the NRS Earl 6 Inflatable SUP Board (this review is forth coming).

Thanks to the high density 6″ drop-stitch construction the Boardworks Shubu Raven Inflatable SUP is incredibly durable. You don’t have to baby this board, rocky beaches and launching off of rock outcrops don’t even scuff the Shubu Raven. As long as you are careful with the detachable centre fin then the Shubu Raven is almost indestructible. It’s definitely more resistant to nicks and dings than a traditional hard board.

Inflation only takes about 5 minutes, so you can be on the water in no time without having to mess around with strapping it to the roof of your car like a hard board. And since it stores safely in the trunk of your car, you don’t have to worry about having it stolen should you need to make a few stops along the way home. That being said, I tend to leave the Shubu Raven inflated because I have been paddling it so often! Once I get home I release some of the air to take pressure off the seams.

The Shubu Raven SUP comes with its own high volume pump that has an inline pressure gauge, allowing you to get the inflation just right. While the pump does the job, it’s pretty basic; I have used ones with more features on other boards we’ve reviewed. The board also comes with a repair kit in a water proof container. It would be nice if both of these items had dedicated pockets in the Flap Pack to keep things together and provide some added protection against them getting lost or damaged.

At only 25lbs the Shubu Raven is light enough to pack into a remote lake and rolls up pretty small when deflated. The Flap Pack that comes with the Shubu Raven SUP opens up like a climbing rope bag so it couldn’t be easier to pack it away, unlike conventional back-pack style packs that make it more difficult to get the SUP in and out of.

I also liked the fact that the centre fin was slightly flexible and not as rigid as others I’ve seen. This allows for some wiggle room when you happen to accidentally hit something with it. While you still need to take the utmost care with the fin, it is nice to know that there is an element of forgiveness built into it.

Overall, the Boardworks Shubu Raven Inflatable SUP scored relatively high for its ability to glide well and manoeuvre easily in all water conditions. Its stability was more than enough for the absolute beginner, and let’s not forget how small it packs down into that handy Flap Pack. If you are in the market for a SUP board (even if you are not considering an inflatable) do yourself a favour and take the Shubu Raven for a test paddle, you’ll be glad you did.