Many ski manufacturers are going über light these days due to the growing popularity of backcountry skiing. The trick, however, is to minimize weight while maintaining ski-ability and the feel and power of a larger/heavier ski. Blizzard has weighed into this game with the new Zero G 85, 95 and 108 Skis (as well as the 85W for women). We decided to give the Blizzard Zero G 95 Skis a try since they fall smack-dab in the middle of the line-up and come in at a staggeringly light 2,300g per pair for the 171cm length. Yes, that's the weight per pair, and a solo ski! The Zero G 95’s are lighter than any ski we’ve ever reviewed here on BackcountrySkiingCanada.com, so naturally I was interested in how they could achieve such a staggeringly low number, and of course, how well they ski in variable snow conditions. 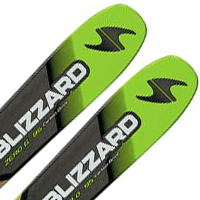 The secret to Blizzard‘s taming of gravity is in their carbon fibre frame technology, which they call “Carbon Drive”. This technology uses an ultra-lightweight paulownia wood core construction and wraps the tip and tail of the ski with a 3 dimensional sheet of unidirectional carbon fibre that increases torsional stiffness and reduces weight. Blizzard’s Carbon Drive construction is the first uni-directional carbon frame ski design, making it the lightest weight alpine ski on the market (for it’s dimensions).

The Blizzard Zero G 95’s profile has a slight rocker in its tail with more at the tip and camber underfoot. The tapered tip and tail help initiate the turn, increasing torsional rigidity and by extension, its overall stability and power transmission.

I mounted the Blizzard Zero G 95 Skis with Marker’s new KingPin Bindings which are touted as a “Free Touring Binding”. They’re a relatively light-weight hybrid tech binding that has a full alpine heal so you can ski them hard in-bounds and still keep the benefit of a light weight tech toe for ski touring out of bounds. Read our full review, or watch the video overview of the KingPins here.

Lets take a closer look at these beauties. 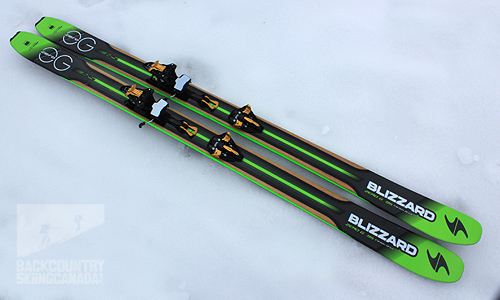 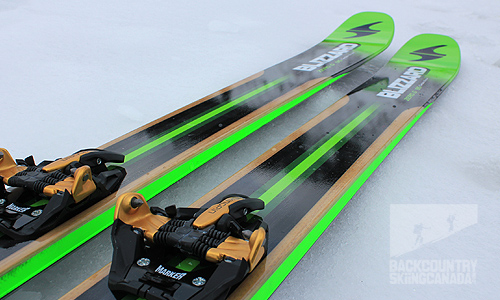 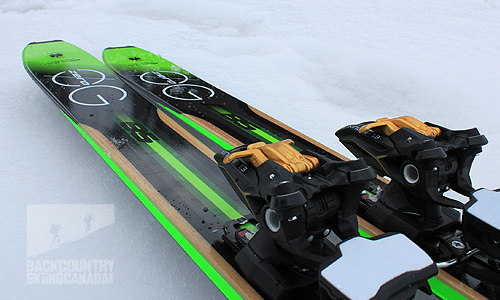 Plenty of early rise in the tips to float in powder and minimal up-turned tails to complete the finish of each turn. 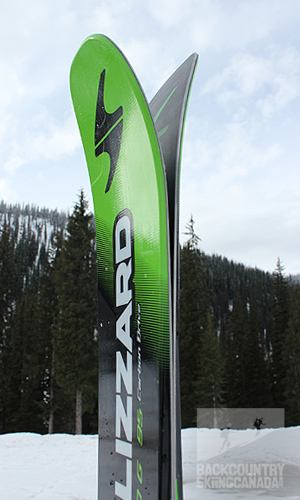 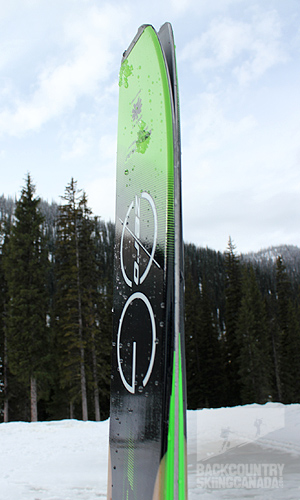 Camber underfoot but just a little to make those turns 'pop'. 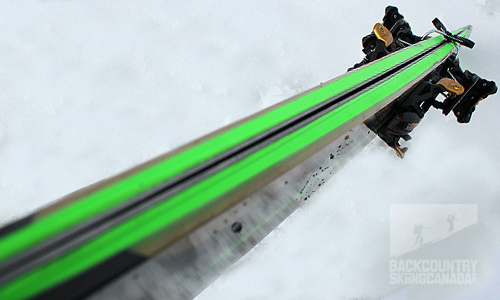 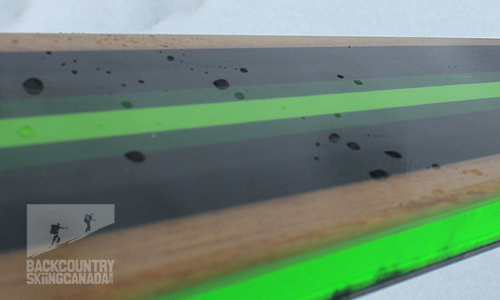 Under the skis, we mounted up a pair of custom cut Pomoca touring skins which are made of 100% Nylon. These Pomoca ‘Free’ skins provided great climbing traction at an affordable price. They are treated with an exclusive anti-glopping ‘Ever Dry’ process for improved waterproofing. Having the skins pre-cut means getting out in the backcountry faster and not having to fuss with the trimming process (we all know how finicky that can be). For more skin reviews have a look over here on our climbing skin review page.

A simple but effective tail cam and tip clip system. 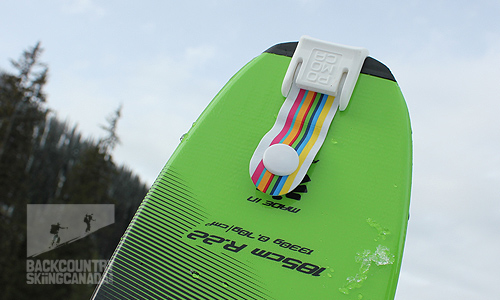 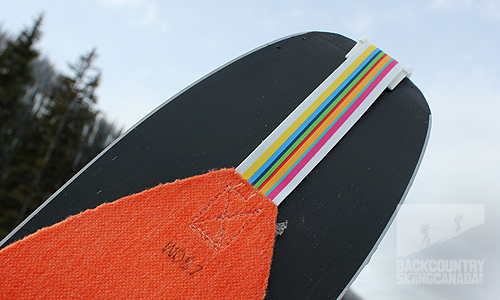 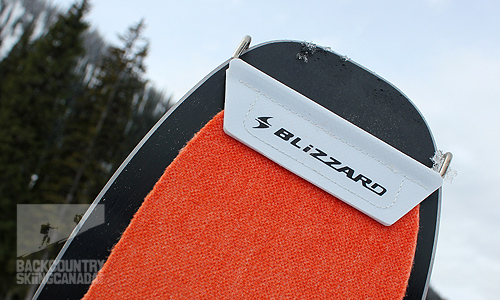 Plenty of plush to give great climbing power but also a good glide when you need it. 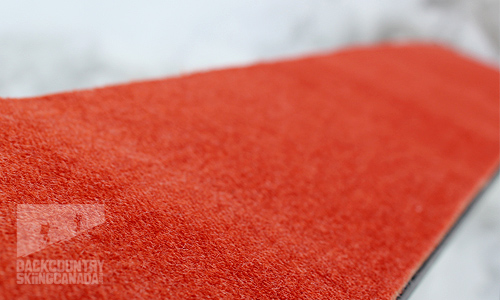 The big “wow” factor with the Blizzard Zero G 95 Ski occurs when you first pick them up. They are light. Super light. Before I mounted these skis with bindings I couldn’t help but smile in amazement at just how light they were. My amazement however quickly turned to concern as I was doubtful that a ski this light could handle variable conditions in bounds at resorts. This is a super light-weight touring ski after all, but is it a true quiver of one ski?

I tested the Blizzard Zero G 95 Skis at Whitewater Ski Resort here in Nelson, BC where we get a lot of snow. The groomers are typically soft as there is no man made snow… anywhere. To ensure I tested the Zero G in all conditions I hunted out crud, hard pack, compact and even the limited (soft) ice I could find. Most of my testing, however, took place out of bounds in the Whitewater backcountry—this is a backcountry ski after all. I was skiing the 185cm length skis, given that I am 6’1” and 175lbs. The Zero G’s are a 95mm waisted ski so they provided reasonable float in powder, or at least as much as can be expected with a ski of this width. That being said, The Zero G 108’s would be a much better ski for those deeper days, and with only a 400g penalty (per ski) it’s an easy choice to go bigger—(at least around here in the Kootenays). Skiing on anything under 30cm of snow you won’t be disappointed by the Zero G 95’s, but in depths over 30cm I was wishing I had the Zero G 108’s under foot. Slightly increased rocker in the tip would help with float, but would also increase tip chatter.

On variable snow like chunder and crud the Zero G’s definitely got pushed around, simply because they just don’t have the mass to plow through snow like that. They were, however, super fun on the soft groomers. They provided a solid carve and rebounded fast from turn to turn considering their camber underfoot. The minimally rockered square tail finishes the turn off nice and crisp. On harder packed snow and ice the lightweight nature of the Zero G Skis was noticeable as the tips tended to chatter, and the skis could be a little skittish if you didn’t stay on top of them. With our local average snowpack being in the 300cm+ range this typically isn’t a problem, nor is it an issue in the backcountry.

The Blizzard Zero G 95 Skis are not quite a true quiver of one ski, but definitely qualify as a good dedicated touring ski that’s an absolute machine on the up track. For regions that don’t get a huge snowpack the Zero G 95 is a good all round solution. But for those of you skiing the coast mountain and West Kootenay areas the Zero G 108 Ski would be the one to get. The Zero G 95 is also well suited to multi-day ski tours and traverses given its crazy light weight. Over all, the Blizzard Zero G 95 Skis are a great dedicated ski touring ski that are at home out of bounds but can also confidently tame the groomers in-bounds.