The Atomic Backland 95 Ski is a lightweight touring ski designed with an All Mountain Rocker profile to allow transition from powder to groomers with ease. The ultra-light Poplar and Caruba wood core is beefed up with a carbon backbone to keep the weight down without compromising downhill performance; so they are ideal for ski touring. This carbon insert runs the length of the ski to stabilize it while still providing the agility required to ski groomed resort runs. I guess you can say that the Backland 95 Skis aren’t a one trick pony. Out of bounds the Backland 95’s light weight allows them to climb the skin track with relative ease. The All Mountain Rocker profile (15% tip rocker and 85% camber) maximizes edge contact at the tip and tail on groomed runs, while the conservative amount of tip rocker provides float in powder with absolutely zero tip chatter on hard pack snow. Less tail rocker ensures that your turns are complete and you still have versatility on the skin track for kick turns and reverse maneuvers when required. 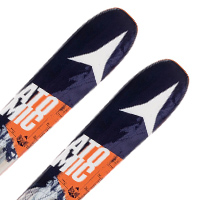 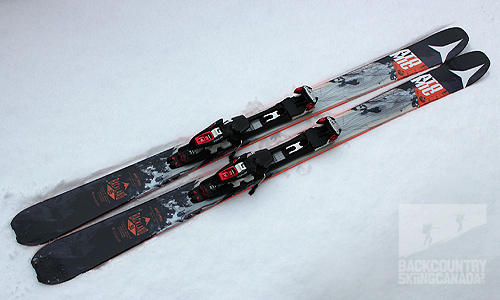 The Step Down Sidewalls on the Backland 95 Skis are full sidewall construction underfoot and full cap construction at the tip and tail. This provides great edge hold on the entire length of the ski, and maximizes durability and shock absorption.

Tip and tail rocker is conservative: just enough to provide float in soft snow without any tip chatter. 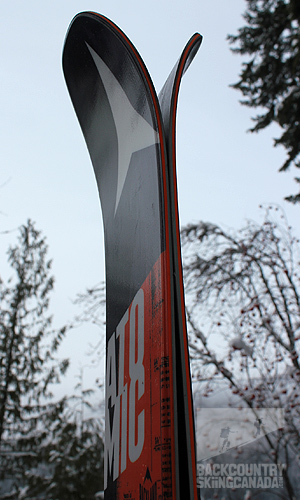 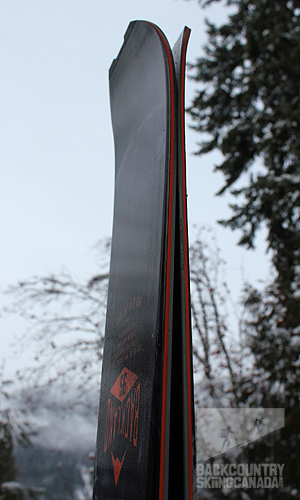 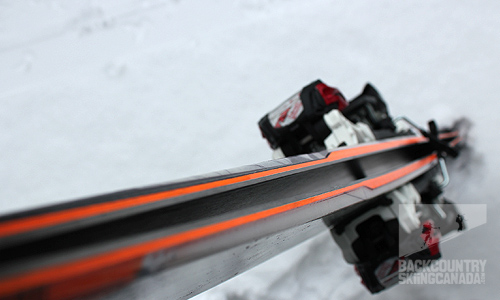 Stepdown sidewall construction provides the best of both worlds. 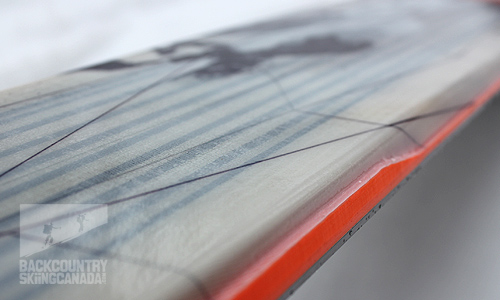 All Mountain Rocker is evident in the tips and tails. 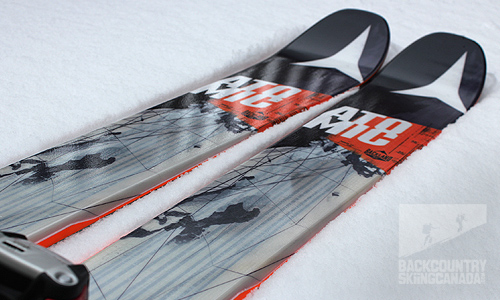 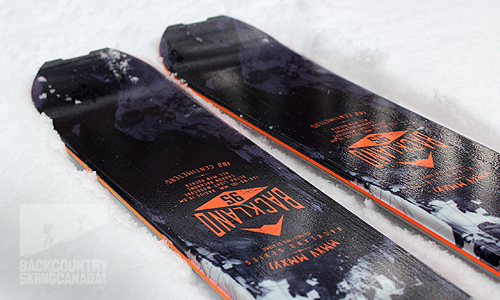 Atomic’s new Backland line of skis and boots for both men and women represent a solid foothold in the backcountry niche of the ski market. I previously reviewed the Atomic Backland Carbon Boots and was thoroughly impressed. The Atomic Backland 95 Skis, while not as revolutionary, are certainly deserving of some accolades. While there is nothing earth shatteringly new about the Backland 95 skis (as there is with the Atomic Backland Carbon AT Boots) the skis provide a super solid ride in all snow conditions. They’re stable at speed and in variable snow, able to make quick edge-to-edge turns, and carve out long arcing GS turns. They were playful on groomers and in powder.

This is a real workhorse ski. Its dimensions are ideal for a resort ski, but a little on the narrow side for a dedicated touring ski. A fourth width of 100 or even 105mm would be the cats ass in this reviewers opinion; Hopefully these dimensions are in the Backland’s future.

In my testing at Whitewater Ski Resort, and out of bounds, the Backland Skis never let me down. However, given the 3+ metre snow pack that is typical in this neck of the woods, the Backlands were a little narrow underfoot. Its minimal early rise handled powder considerably well, but an earlier rise or more aggressive rockered tip would be welcome features.

On groomers, the Backland 95’s considerable camber underfoot made the ski playful as it popped seamlessly out of each turn and into the next. With a square tail and minimal rise each turn finishes nice and crisp, readying the ski for the next one.

Overall, this ski is very comparable to the award winning Voile V6; only with a little less shape. Both skis handle similarly and have the same solid feel; except the Atomic Backland 95’s being much lighter in the weight department. This makes the Backlands ideally suited to backcountry skiing. That being said, they could do with a little more meat underfoot.