Movement is a Swiss ski company with its routes in snowboarding before it pivoted to designing and manufacturing skis. Founded in 1980 with their ski line being born in 1999, Movement now also offers Freetouring boots as well as branded skins, poles, helmets, and more. They design and manufacture Freetouring, Freeride, Freestyle, Backcountry, Piste, and Skimo/Race Skis for a total of 10 different models and 36 different skis. For 2021, Movement has re-launch in North American so now we can experience their Swiss ingenuity, attention to craftsmanship and detail here on this side of the pond.

Given our passion for backcountry skiing, we requested to review the Movement Alp Tracks 106 Skis which are classified as a Premium Free Touring Ski or as Movement puts it: “Our premium ALP TRACKS line has been entirely redesigned with the introduction of a new exclusive carbon complex that guarantees even greater skiability with new levels of weight never been reached. This ski, manufactured largely manually and handcrafted, is one of the most sought-after skis on the market.” 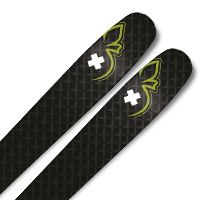 Beyond their incredible lightweight and proficiency for tracking up backcountry pow, the Movement Alp Tracks 106 Skis are also one hell of a good-looking ski. 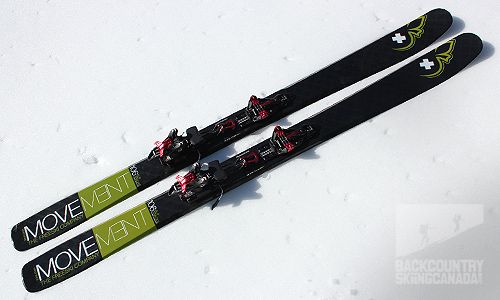 At 106 underfoot this is the widest ski in the Alp Tracks line so it’s ideal for big backcountry days when you want to cover a lot of ground and there is plenty of soft snow to be enjoyed. For those that ski where the snow is not so plentiful or if you simply want to go lighter and faster, then there is an Alp Tracks ski for you as they also come in 85, 90, and 95 skis for both men and women.

A generous and long camber is found underfoot the Alp Tracks which extends their effective edge making them more effective in the turns and and this also provides rebound from turn to turn. Their 20m radius sidecut helps the Alp Tracks bite into the snow on turns which facilitates riding more variable snow conditions and uneven terrain—even though this ski is designed primarily for soft snow. 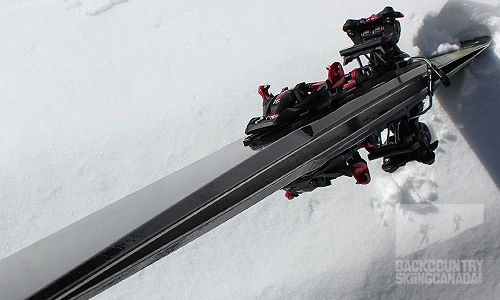 Movement uses CS & PEFC certified lightweight Karuba wood cores in the Alp Tracks skis and around this they wrap a full carbon laminate with fibres running along many different axes. This increases the skis longitudinal and torsional rigidity with less weight than a traditional fibreglass laminate. 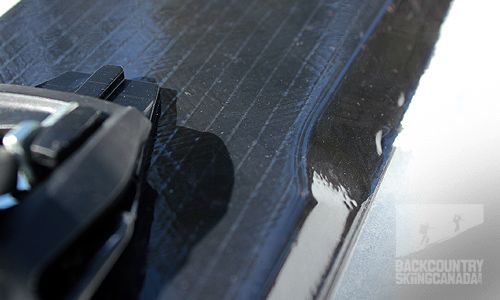 To help minimize unwanted vibrations Movement has placed an ABS shock absorber underfoot (along with a titanal binding reinforcement double plate) and rubber-infused fibreglass in the tips. These vibration-absorbing materials help to keep tip chatter at bay when skiing in less than optimal snow conditions. 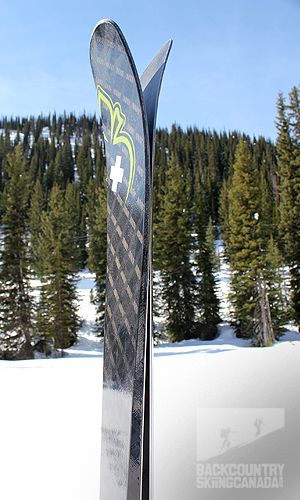 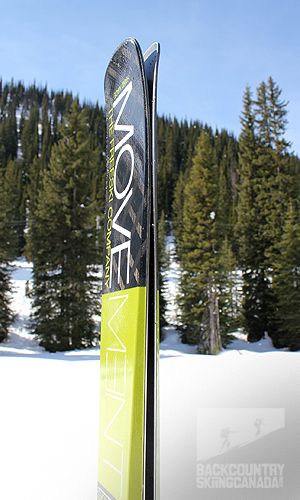 To date, the Alp Tracks 106 skis are the lightest skis we’ve ever reviewed when you consider their overall surface area dimensions. At 138 / 106 / 126mm this is by no means a narrow ski and yet it weighs in at an impressive 2.8kg / 6.175lb for the 185cm length skis. Comparable skis to this would be the Black Diamond Helio Carbon 104 Skis which weighs in at 3.2kg, the Blizzard Zero G 105 Skis at 3.06kg, or the ZAG SLAP 104 Skis at a comparatively burly 4kg. 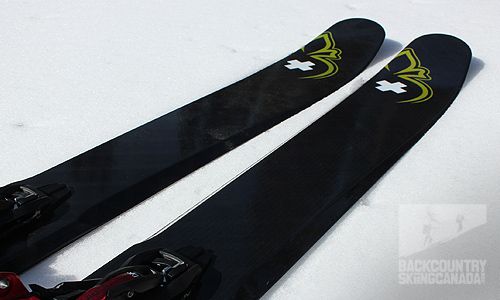 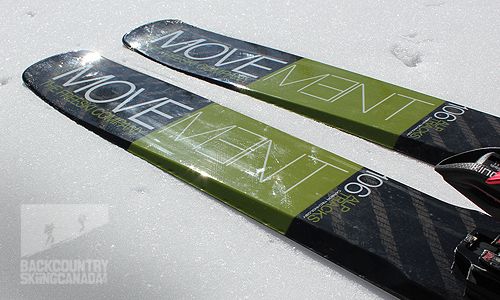 To further help reduce weight in the Alp Tracks 106 Skis, Movement incorporates their “touring edges”. While these are not as thin as their race edges which are found on their narrower Race Pro series of skis they are definitely thinner than the edges you’ll find on most inbounds skis.

The Movement Alp Tracks 106 Skis are ideal for backcountry purists who want a super lightweight dedicated touring ski that will not sacrifice float or performance on the deepest of days. 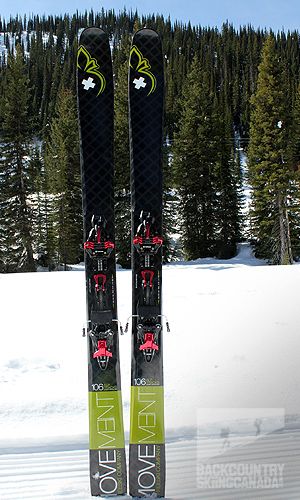 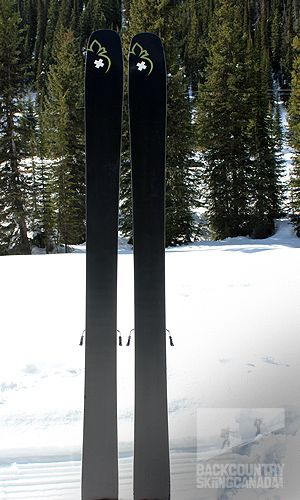 So before we dig into the verdict I just have to reiterate that the Movement Alp Tracks 106 Skis are designed and marketed as dedicated backcountry ski. This is confirmed by their insanely light 2.8kg / 6.175lb weight, which is a weight more commonly found on skis 1cm narrower from tip to tail. The Alp Tracks 106’s are the lightest weight to surface area ski we’ve ever reviewed.

Having said this, you’ll understand why the Alp Tracks 106 Skis didn’t perform as effortlessly on snow that wasn’t backcountry blower pow. These skis are designed to ski soft consistent snow and they do it very well, the rocker profile in the nose ensures they float with ease and the fat 138mm tips mean that they’ll stay on top. Even though I was sent a pair of 177cm skis instead of the preferred 185s, I found that they still performed well in deep snow. Sure they were a little short (I’m 6’1” ad 180lbs) and I tended to get into the front seat a little easier than I would have liked. Thankfully the tips on the Alp Tracks 106 Skis are fairly soft and forgiving. Underfoot things gradualy stiffen up more thanks to the Titanal double plate reinforcement layers. Down at the tails you’ll find that they are fairly flat, square and fat, and are notably stronger than the tips so they finish turns nicely and provide a nice long contact with the snow.

Crushing vertical on the skin track with skis this light was fairly easy and could have been much, much easier with the right binding mounted on the Alp Tracks 106’s. A pair of Marker Kingpin Bindings was mounted on the skis when I received them for review and while these are great bindings I would never have paired them with such a light ski. To really appreciate the Alp Tracks 106’s lightweight I would have much preferred to mount them with a pair of crazy light Marker Alpinist 12 bindings.

While testing the Alp Tracks 106 skis on firm groomed snow and more compact conditions I noticed quite a bit of tip chatter which forced me to have to concentrate more on driving the skis where I wanted them to go. Given how light they are they were also not that proficient at plowing through broken snow, chop, and chunder as they deflect easily. You really need to stay on these skin in variable snow conditions and even then it’s challenging for an experienced skier. In deep powder, the Alp Tracks 106 Skis were fun and floaty, turns of any flavour were easy and plentiful, not so on hardpack. The tips felt skittish and therefore did not carve short or long radius turns easily and it was hard to maintain a solid railing carve on groomers. Soft consistent snow is where these skis excel and you have to be prepared to give up some stability and power in order to save so much weight.

If you are looking for an all-round ski that can go fast and ski anything then this is not that ski, this ski performs best on soft consistent snow and lots of it. You can rack up vertical all day long on big backcountry days or multi-day traverses with the Alp Tracks 106 skis and be assured the ski down will be just as light and effortless in that bottomless snow.

Be sure to also read our review of the Sessions 95 skis here, as these are a more versatile free touring ski from Movement.