Black Diamond’s new Helio Carbon line of skis is the companies lightest touring focused skis and they come in widths of 115, 104, 95 and 88 so there’s a ski for every type of skier and snow conditions. Black Diamond also still produces the Recon line of skis which is also aimed squarely at the backcountry skiers out there but without the carbon constructions, these skis are slightly heavier but also less pricey. These skis remain unchanged for this season whereas the Black Diamond Cirque line of skis is all new and designed for those who want to charge hard and fast while ski mountaineering or fitness touring. Black Diamond's Boundary Pro line of skis are also unchanged for this season and are more freeride oriented skis, while they can still tour they are more adept at mechanized skiing. 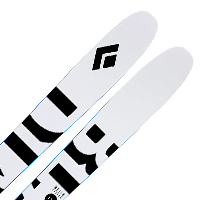 In this review, we’ll focus on the Helio Carbon 104 Skis because they hit that sweet spot of fat enough to shred pow and light enough to lap the skin track. Watch the following video overview for all the details.

The Helio Carbon 104 Skis—like others in the lineup use a pre-preg carbon fibre layup and an engineered paulownia wood core which improves dampness and provides a smooth ride. This carbon/paulownia wood combo makes the Helio’s very lightweight so going big with lots of vertical is easier than you think. The pre-preg carbon layup is a blend of high-strength carbon fibre which is oriented along multiple axes combined with high-strength E-Glass for toughness and damping and on top of this, you’ll find a tough epoxy resin for added durability. 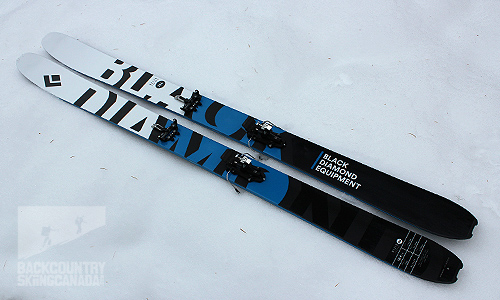 In conjunction with the pre-preg carbon fibre and engineered paulownia wood core is used to keep the skis light with out compromising downhill performance. Its compressive and shear properties provide a smooth chatter-free ski experience while not adding significant weight.

With a balanced flex and torsional stiffness, the Helio 104’s are responsive yet playful in soft-snow with the technical precision you want in variable conditions. 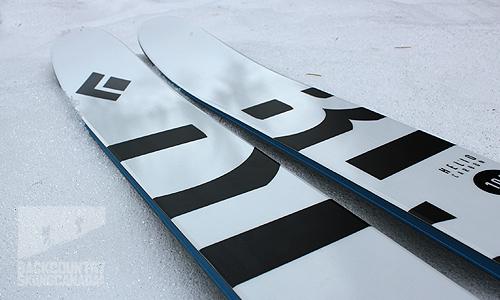 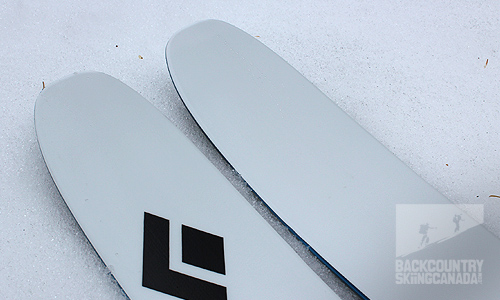 Generous early rise in the tips improves flotation and trail-breaking efficiency since the tips will naturally want to porpoise up out of the snow rather than dive down into it. 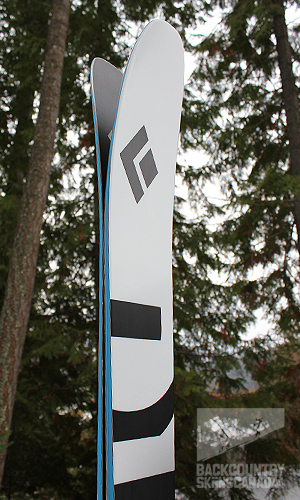 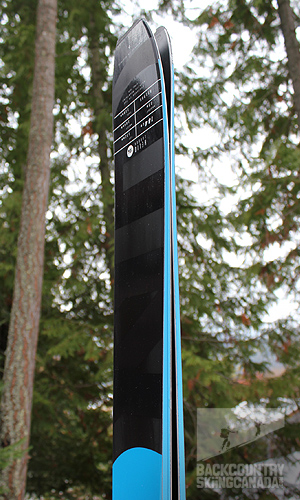 In the tails, you’ll find substantially less early rise so that kick turns are still possible while the integration of an ABS tail protector helps with durability. Black Diamond also integrated a skin-clip tab in the ski's tails so that your skins will stay centred and resist falling off should their glue lose its tack. 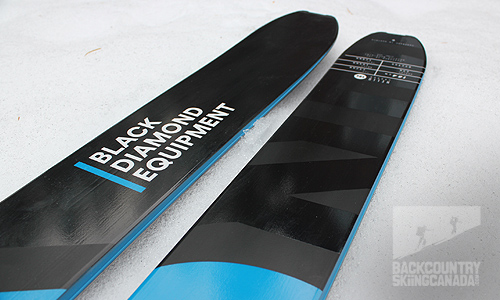 A mild amount of camber underfoot provides some rebound and personality from turn to turn so you have the confidence to take them in more challenging conditions and terrain. 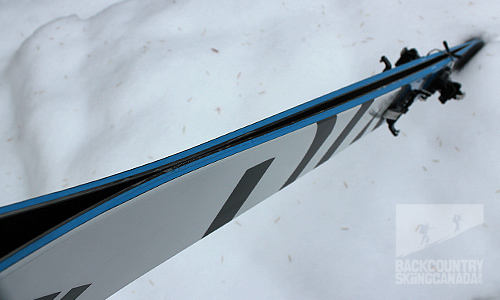 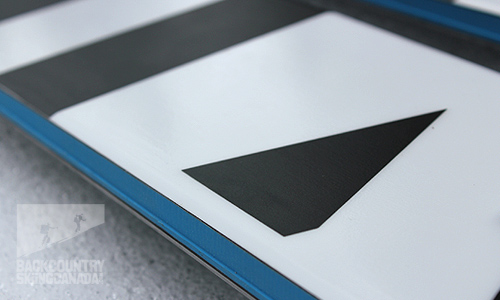 The ideal pairing with the Helio Carbon 104 Skis is a set of Helio 350 Bindings and a pair of Pre Cut Glidelite Mix Helio Carbon Skins, both of which help keep things light. 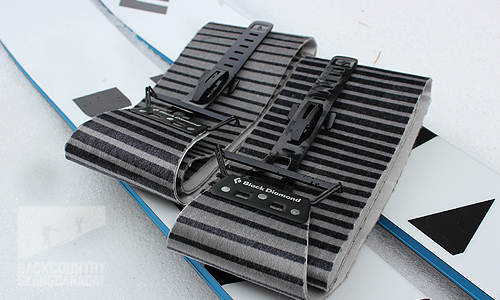 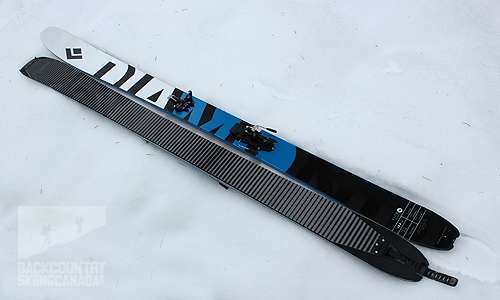 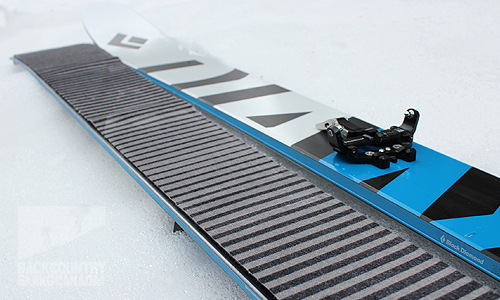 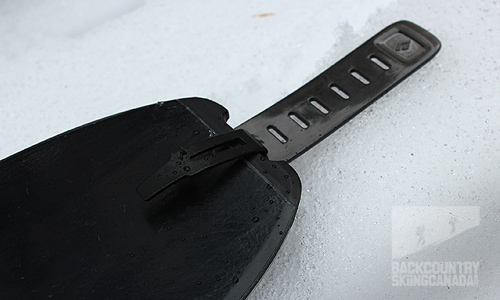 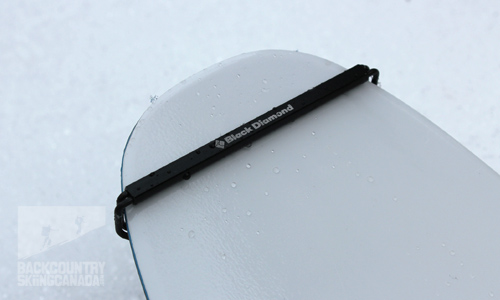 While Black Diamond has had the Helio Skis in their line up for a few years now, for this season they have totally redesigned them with a new construction and rocker profile. This latest version is designed as a hard-charging backcountry ski that is still impressively light. With a full tip to tail carbon layup, these skis remain light yet not overly stiff and still fairly forgiving in pow. I’m partial to carbon construction skis given how torsionally stiff yet light they are, and why I as eager to test the new Helio Cabon 104’s.

The Helio Cabon 104’s generous tip rocker makes slashing powder turns easy yet they remain virtually chatter free on firm and hard-packed snow. While more at home on soft snow, the Helio Carbon 104 Skis have a mild amount of camber under foot to ensure there is plenty of rebound and pop in each turn. While I didn’t find them particularly fast in tight turn transitions, given their 104 widths I did appreciate how stable they were at speed on harder snow—GS turns over slalom are their preference.

Their smooth flex allowed the Helio Carbon 104’s to be fairly damp considering their diminutive weight, there was minimal tip chatter and they stayed on course if you remained focus while driving them. Since this is a very lightweight ski they do take some concentration and muscles to ensure they don’t deflect in variable snow and choppy conditions. You need to drive these skis and I found speed was their friend as they liked to go fast and carve longer turns rather than short. Deep, light snow, however, is where this ski performs best, they float with ease and turn effortlessly. The more snow the better for the Helio 104’s. You might want to consider mounting the Helio 104’s just ahead of centre which will help keep their tips in check and pointing the way you want them.

The Helio Cabon 104’s semi-rockered tail finishes turns with intention and ensures that kick turns on the skin track are easy unlike other skis with more tail rocker.

If you are looking for a pure backcountry ski then this is it, while it can ski groomers this is not what this ski is designed for so don’t expect too much of it on this type of terrain and you won’t be disappointed. This is after all the second-widest ski in the Helio Carbon line of skis which is Black Diamond’s lightest collection of skis.

Pairing the Helio Carbon 104 Skis with the Helio 350 Bindings (which we reviewed here), and the Glidelite Mix Helio Carbon Pre Cut Skins creates an unbeatably lightweight backcountry ski touring set up. The skins are a mix of 65% mohair and 35% nylon and retail for $209.95CAN / $189.95US.