Born in the shadow of the highest peak in the Alps, Zag Skis has been designing and manufacturing freeride, free touring and touring skis for over 15 years now in Chamonix Mont-Blanc. Renowned the world over for some of the best skiing on the planet, there is surely no better testing ground for a ski brand than Chamonix. Being based there means that the 'ZAG Lab' is able to develop prototypes, test product, and make improvements almost instantly at their Grands Montets location. It means that their R&D department and athletes are totally connected with the surrounding mountains which are conveniently located right in their backyard. Just ask Wadeck Gorak a recently signed ZAG athlete who won last years Freeride World Tour 2019 Verbier Stage on a pair of ZAG SLAP S-112 Skis. 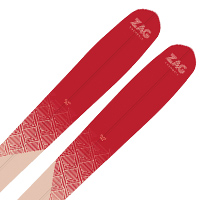 Their distinctive top sheet design is but the start of what ZAG has done right with the SLAP 104 Skis. 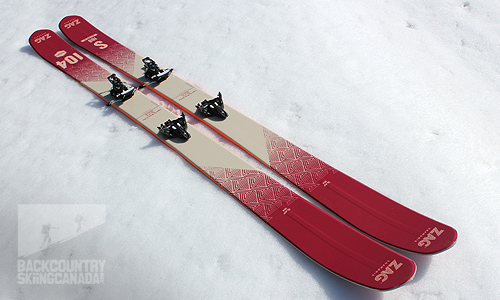 Already a big player in Europe, ZAG is now expanding to North America and was a participant of the 2020 Kootenay Coldsmoke Powder Festival at Whitewater Ski Resort which is where I happened upon this new to Canada brand. At the festival, I tested a few of their skis and instantly knew that they were worthy of a more intensive ski review (or two), and a brand that you, our valued readers should know about.

If you are looking for less of a freeride ski and more of a dedicated touring ski then read my review of the ZAG UBAC 102 Skis here. Both the ZAG SLAP 104 and Zag UBAC 102 skis were mounted with Marker's new Alpinist Bindings in order to keep them light and fast in the backcountry. 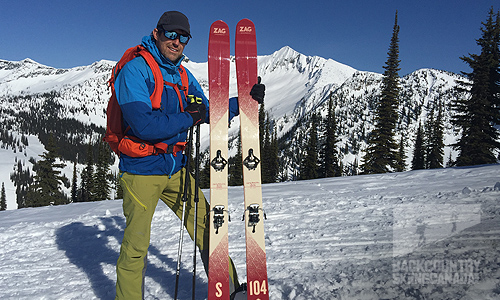 ZAG uses a light yet powerful construction which they call ‘Heavy Duty Light’. This is a combination of multi-axial fibreglass which provides stiffness in torsion and flexion to increases the power of the ski and a full wood core of paulownia for lightness and poplar for strength. This makes the SLAP 104’s light, playful and stable at high speed, while linen fibres in the centre of the ski help absorb vibrations. 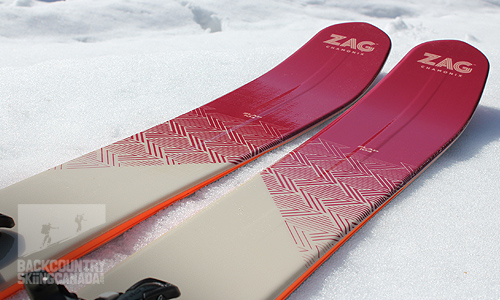 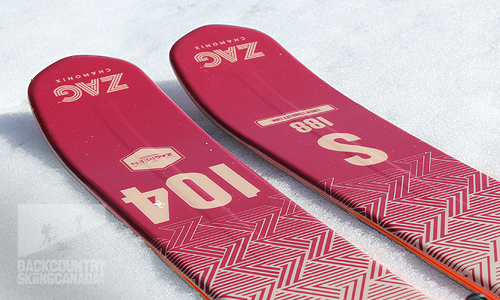 The five-point shape of the SLAP 104’s brings the widest points of the ski as close as possible to its centre which makes the ski playful and easy to turn. This allows ZAG to increase the manoeuvrability of the SLAP 104’s without increasing the rocker profile which could affect vibration. 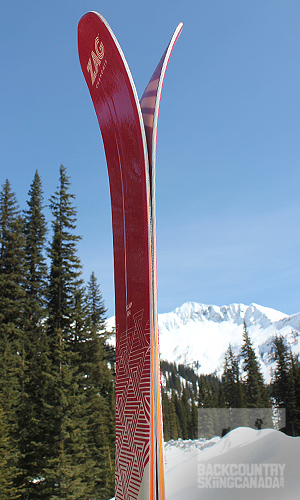 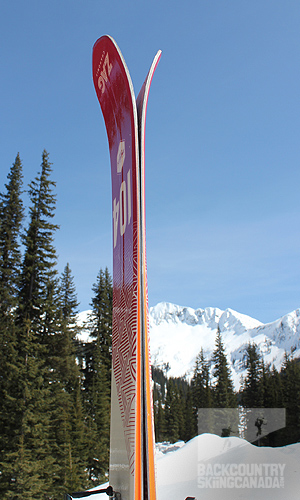 The variable radius of the SLAP 104 Skis in the tip, centre and tail means that there is a much shorter radius underfoot for increased handling while keeping the tips and tails in contact with the snow. This multi-radius shape results in a more versatile and fun ski overall.

To keep the ZAG SLAP 104's light and fast for touring I mounted them with the Marker Alpinist 12 Bindings as you can see below. 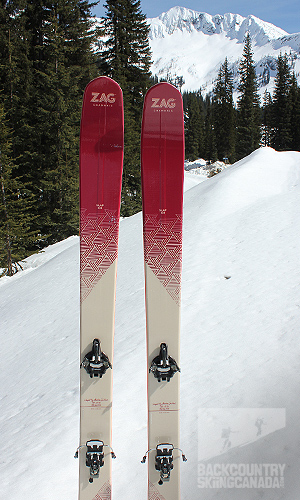 ZAG improved the SLAP 104’s grip on hard snow by ensuring that the ski transmits as much force to the snow as possible by using a half cap construction, while the integration of ABS sidewalls increases shock absorption on rough, broken snow. 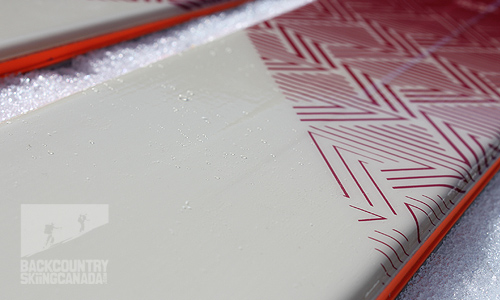 ZAG manufactures skis in a way that reduces the overall impact on the environment as well as influencing the activity of the skiing community and raising awareness of pressing environmental issues. Their ZAGreen Program which launched in 2017 is committing to not only greener ski production with the use of FSC Wood cores, recycled edges and scrap base materials but also ensuring that 95% of their ski’s materials come from and are made in Europe. They are also a member or POW, 1% For The Planet and have committed to donating 1% percent to the Mountain Wilderness Association.
ZAG’s SLAP Skis are available in several widths, the 104 which we tested here and if you want a fatter shape for deeper snow you can choose from the 112 or 122 skis. 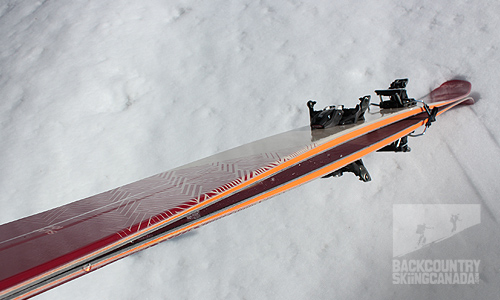 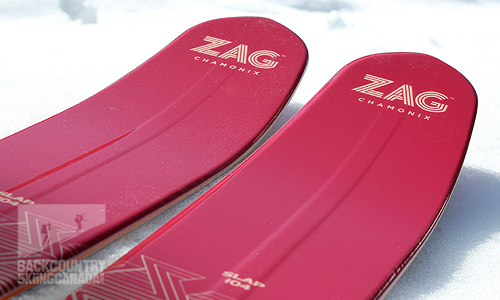 My first impression of the ZAG SLAP 104 Skis was that the tops sheets are as unique as they are beautiful. Not one to be easily wowed by superficial looks alone I was also was impressed at how durable they felt and how impressively light they are for a ski of these dimensions. I have to be honest, however, I am not much for all-mountain skis and prefer those with a more traditional touring shape. Flat tail, wide nose and silly light—like the ZAG UBAC 102 Skis which I also reviewed, over here.

ZAG’s SLAP 104 Skis won me over pretty quickly once I got them underfoot. The first few laps were on heavy pow which transitioned quickly to frozen groomers so the testing conditions ran the gamut. Luckily the SLAP 104’s have a relatively soft flex which is forgiving in challenging snow and playful in pow and schmoo. Their 104 width is wide enough to be stable in variable snow but not so wide that they take effort to put on edge when things firm up. Given their aggressive early rise in the tips, it's easy to see that they're built for softer snow, deep and plentiful—but they can easily take on anything with relative ease. Their construction is solid, yet surprisingly light and responsive for how smooth of a ride they provide. The camber underfoot keeps them lively and provides some snap on hardpack groomers.

No matter what the terrain or snow conditions the SLAP 104 Skis were able to charge with confidence and provided a really fun ride. Their short effective edge allows you to smear and slarve turns in pow or spring corn conditions but also limits the SLAP 104’s ability to really rail an edge in an aggressive GS turn—but then again they are not designed for this.

On hardpack groomers and re-frozen spring snow, I did notice some tip chatter but it wasn’t enough to be of concern and the skis still tracked well overall. The aggressively rockered tails did limit the ability to finish a turn crisply but this does allow for a fun and creative ride especially in variable snow. On the skin track this 25% rockered tail does, however, prove problematic for kick turns in deep snow when you have to bury a ski.

Overall ZAG’s SLAP 104 Skis are an impressive all-mountain ski that inspires confidence in firm variable snow and while I am no Wadeck Gorak I sure did feel like I could take on the Freeride World Tour—ok, maybe not just yet.