We have been skiing the Scarpa F1 for the last couple of seasons so we thought we'd give our earlier review a little refresh. We started it all off with a review of the Scarpa F1 Evo  back in January of 2015. The Evo version of the F1 had a hands-free walk mechanism that Scarpa decided to pull from the market because it wasn't working to their satisfaction. The boot we'll be looking at today is substantially the same—but with the hands-free walk mechanism gone and other minor tweaks (and aesthetics) added that make the boot even more loveable. Speaking of aesthetics, we went for the Ferrari-red 80th anniversary model. Note that, if you'd like to see our video review of the F1 from 2016, click here. 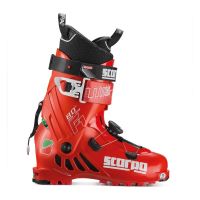 Here below is a little video the good people at Scarpa put together on the F1.

SHOW THE REST OF THE REVIEW / PHOTOS / VIDEOS
The red shell of the 80th anniversary model, with green accents and a bit of white, is a nice understated nod to the manufacturer's rich Italian heritage. The boots are already striking without the shells. With them, they look (and are) even more unique. If you want to avoid remarks, go deep into the backcountry and get away from everybody; these boots will take you there.

Rather than repeat ourselves, we'll focus on the new design and the features that have been added since our initial review.

If the version you see photographed here looks extraordinary and unlike other Scrarpa F1s you've seen on the uptrack, that's because these are the special 80th anniversary versions—in fire-engine red. 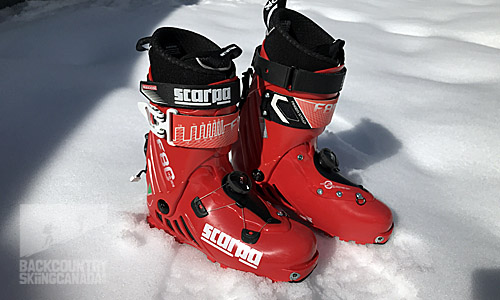 One change from earlier versions is the inclusion of a RECCO reflector, seen here tucked into the inside of the power strap. 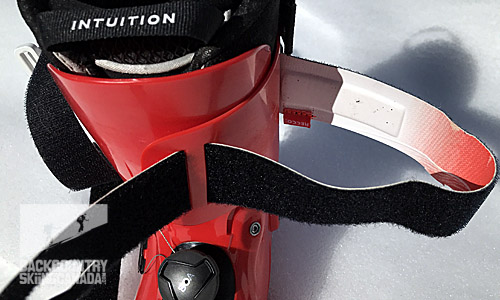 Here's a feature that's not new but we didn't highlight it before so we thought we would here. It's the asymetrical "nose." When you first look at the F1, it may appear that the boot won't fit you. Au contraire—the F1's fit my weirdly shaped feet like a pair of bedroom slippers. 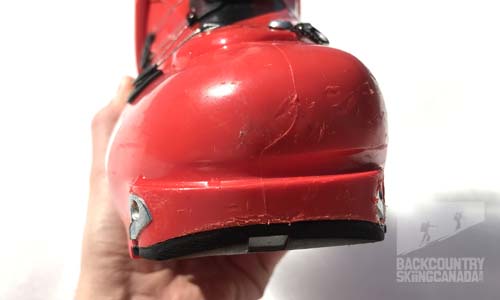 Here is the F1 walk mechanism, closed and then open. Note that, when changing into ski mode, you should ensure you're "engaged." The slot can get snowed in and freeze up—making you think you are in ski mode, when you'r not. 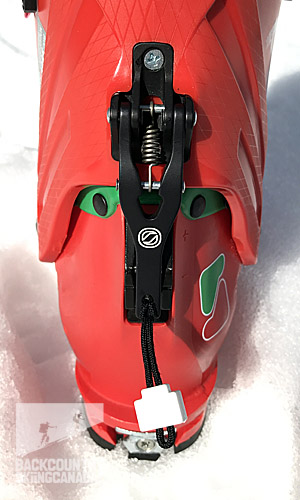 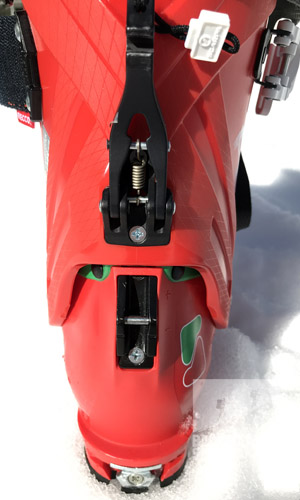 One aspect that can be a challenge for some is getting in and out of the boot. I found a handy video on the Scarpa Europe site that spells it all out for us. Below that is our F1, with the shell flexed and ready for entry. 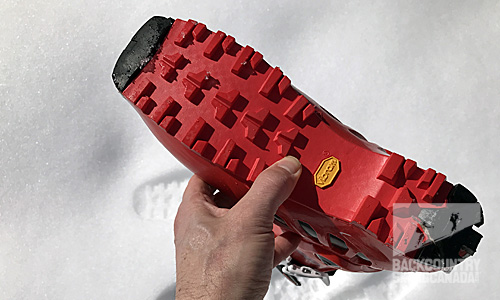 Because the boots are substantially the same as ones we've already reviewed, I invite you to read our earlier verdict, here. The boots ski the same as they did when they won our Gear of the Year designation. I usually paired my 2015 model with a G3 Carbon Zenoxide 105, now my F1's are paired with the DPS Alchemist Wailer 112 and the Dynafit Speed Radical. It's a pretty light set up that is great for long tours.

I haven't skied the F1s at the area (unless I am taking the lift up to get to slackcountry) and I wouldn't really recommend it for anything but mellow groomers. The F1 is the kind of boot to buy if you can swing two pairs. It's definitely not a quiver of one boot. If you feel like a little flash in your life, and you want to acknowledge Scarpa's rich history as a primo Italian boot maker, pick up a pair of the 80th anniversary models.

Note that, after skiing the the F1s for 4 seasons, they still get a near perfect score in our ratings below. Re-reviews like this are unusual on the site so it represents a big endorsement of the boot. Maybe that's why you see so many pro ski touring guides wearing them.