The Full Tilt Ascendants are the brand’s first foray into the world of alpine touring—and they’ve done a pretty good job of it. Full Tilt has an interesting history for ski-gear buffs. The original three-piece design,and moulds, were the property of Raichle boots (remember the Raichle Flexon  model?). After a few changing of hands, names and continuous improvement, Full Tilt was born in 2006. As was the case with Raichle boots, Full Tilt enjoys a cult following. As this following began to tour, the need for a boot with the legendary progressive flex—and all the other features that Full Tilt fans enjoyed—became apparent. Enter the Ascendant, Full Tilt’s new boot, a touring specific model with all the compelling features of the original. 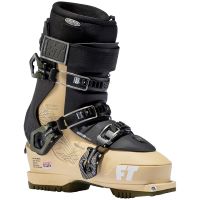 We’ve already had the pleasure of reviewing the “regular,” non-touring Full Tilt High Five model. Read the review here. The High Five came out a few years ago and it’s clear that there have been many upgrades to the boot line. As well as all the mods to make the Ascendant touring friendly, many other advancement (like the boot sole and liner) show that Full Tilt continues to evolve its product.

The Full Tilt Ascendants are a great option for Full Tilt devotees eager to bring Full Tilt features and progressive flex into the backcountry. Here they be, below. For the full review, click the arrow at right in the orange bar below the image. 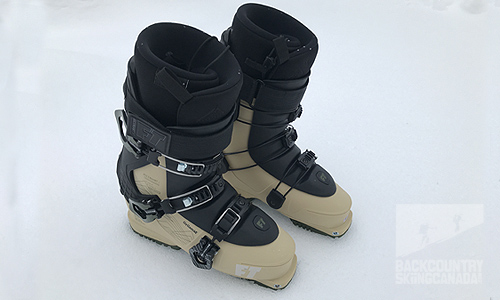 Everybody loves a video. Here is one from Full Tilt extolling the virtues of their boot.

If something looks like a regular Full Tilt boot, is it? Not always—note the AT-specific features like the tech toe inserts and the ski/walk lever. The Ascendant is Full Tilt gone AT. 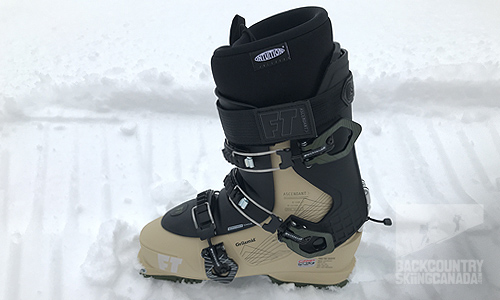 Note the higher back cuff, and the Power Wedge velcro removable spoiler tucked in between it and the shell, on the back view at right. The Ascendant's Grilamid Evolution Pro Tour shell offers a smooth stride and the progressive flex Full Tilt fans know and love. 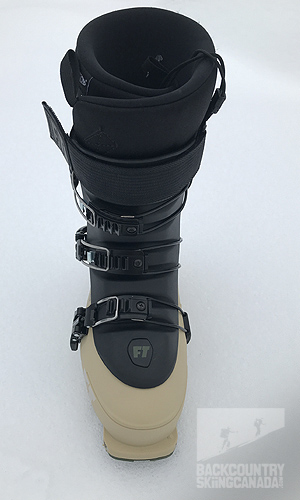 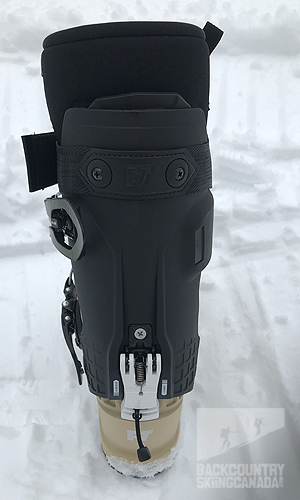 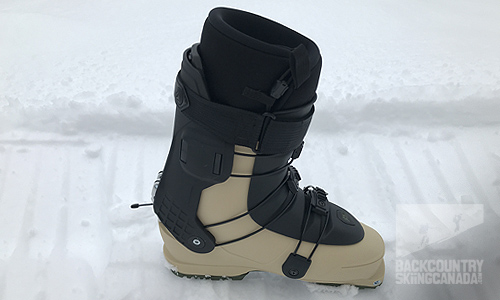 With this, their Ascendant model, Full Tilt has wisely incorporated many of the AT-specific features like the buckle tour hook you'll find on a boot like the Scarpa Maestrale (on all models). If I were a smarter person, I would have taken a picture of the buckle engaged in the climbing hook; hopefully you get the idea. The micro-twist/ladder buckles allow for fine-tuning. 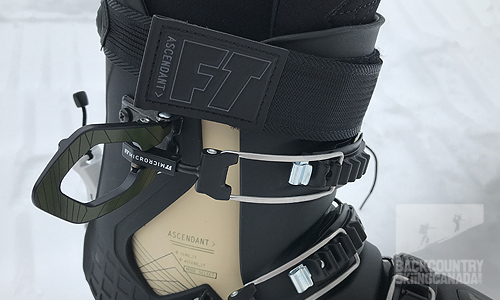 The ski/walk mode is super beefy and the ridge on the boot shell heel is an integral part of the system. This, rather than an extra ski-mode piece or bar that may be more likely to fail—just when you don't want it to. The lever here is also big and easy to grab. 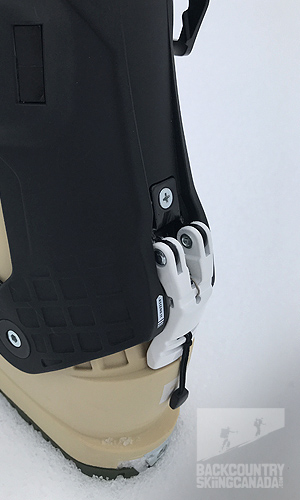 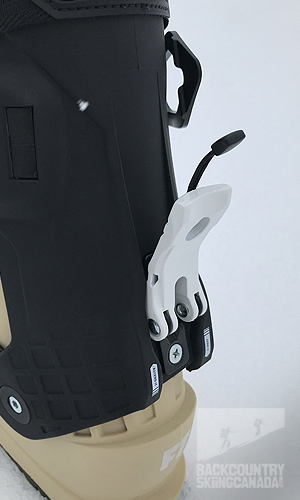 The Intuition Tour Pro Liner is definitely one of the strong points of this boot. With a Tour Flex Notch, removable external J-Bars around the ankle, easy pull-lacing system and the best foam in the biz, this liner delivers comfort, support and warmth—all at a low weight. 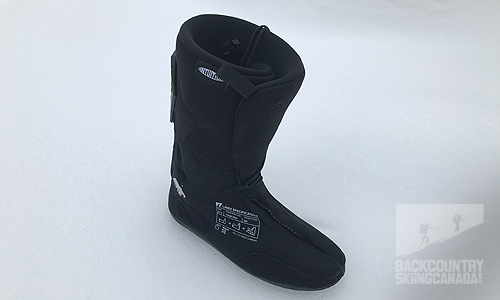 One of the three pieces carried over from the Raichle Flexon design is the tongue. If you are mostly about the down, this tongue is a godsend, delivering even, stiff flex. If you are more about fast transitions, the tongue may be a bit of a pain. We reviewed the Dynafit Vulcan, which has a similar removable tongue, here too. The significant difference between the two boots is that you can tour the Vulcans with the tongue out—up or down. I’d say there’s no option for that with the Ascendant, it’s definitely needed for the down. Many Full Tilt models can accommodate various tongues and stiffnesses. Unless I am missing something, it looks like the stock Ascendant’s tongue is the only option. 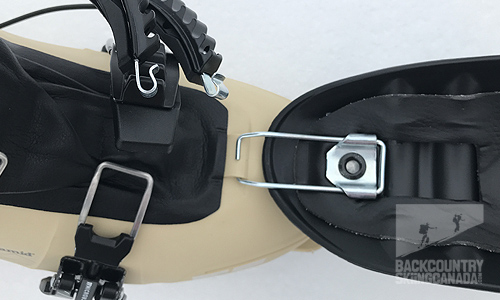 In the pic below, you can see the three part "special sauce" shell that started with the Raichle and grew into the Full Tilt.  The main advantage to this design is the Infinite Pivot associated with the rear cuff. Because it is independant of the rest of the shell, it can pivot forward without flexing the rest of the boot. This sounds simple (and it is) but it makes a big difference and contributes to Full Tilt's excellence on the down. 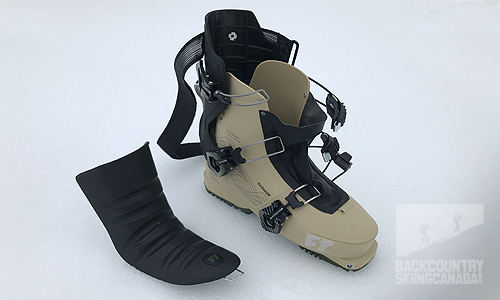 Like the Fischer Ranger 130 boots we just reviewed, the Ascendant features a Gripwalk sole. These soles are showing up on a few new boots these days. They make walking easier, have a good grip and are durable. Note that, if you want, you can swap out this sole for a more grippy, soft rubber Michelin model for $80. I’d only go for this option if you see a lot of scrambling on rocks in your future. The Gripwalks work just fine for me here in the Kootenays. 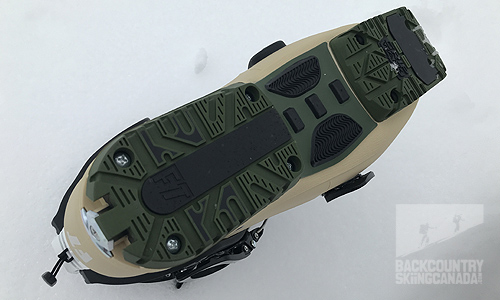 The Full Tilt Acsendant, with a flex of 120, fits into the same sandbox as boots we’ve reviewed, like: the Scarpa Gea RS, Dynafit Hoji Pro Tour, or the Scott Cosmos II. Though flex ratings are admittedly a little arbitrary, we hope it’ll help you place the Acsendant along the boot stiffness spectrum. It’s not the stiffest and beefiest boot out there—like some of the 130 flex boots— but it’s pretty darn stiff. For my purposes, 175lb weight and mellow skiing style, it's plenty stiff.

What sets the Ascendant apart from the pack is the fact that it’s a Full Tilt boot, complete with the famous progressive flex and three piece construction. If you are already a dyed-in-the-wool Full Tilt fan and want to get into touring, this boot’s for you. 100%. Be aware though—at almost 1950 grams per boot, the Acendant is not a boot for weight weenies.

As usual, from my perspective, it all comes down to percentages. If you run lift service 80% of the time and tour 20%, this might be the boot for you. If you are looking for a 100% touring boot (or even 50/50 tour/lift serve) you might want to look elsewhere. If you are a Full Tilt devotee and don’t give a hoot about weight, consider the Ascendant. I have a light-weight set up that I take on longer tours or hut trips. The Acsendant has become my resort boot that I can do side country laps with on a whim.

If I toured more often on the Ascendants, or if there were many transitions required on a single tour, the act of stashing my tongues in my pack on the uptrack, and fiddling with the on-off attachment mechanism while transitioning, would get old pretty quick. The time the detachable tongue eats up on transitions would have to be justified by the quality of the ride on the way down. I say if it's an occasional tour, or one with just one tranny—no problems.

The fit is exceptional. I didn't have to heat-mould the shell, which is apparently an option, but I did get the Intuition liners cooked and fit. Wow. I've tried many Intuition (and non-Intuition) liners over the years and these are the best of the best. The wrap-style of the Tour Pros are remarkable in the way they hug your foot, calf and shin. Comfortable, supportive, warm and custom = great combo.

This is Full Tilt's first AT boot. I hope their designers are working on a new iteration that'll be a little lighter, and maybe works out the need for a fiddly tongue swap-out on transition. If those two design challenges were met, and the Full Tilt progressive flex were maintained, you'd have one heck of a touring boot.