A few winters have passed since Tecnica transformed their original Zero G Ski Boot from what was essentially an Alpine Boot with a walk mode to a dedicated backcountry boot that can also stand up to the rigors of resort skiing. This update placed Tecnica firmly in the backcountry ski boot market, which you can read about in our 2019 Zero G Pro Alpine Touring Boot review. For this review, we’ll be looking at the Zero G Tour Scout Boots which are the lightest boots that Tecnica makes and are designed for skiers who like to ascend as much as they like to descend. Comparable boots to the Zero G Tour Scout’s would be the Scarpa Gea, Scarpa Gea RS, and Dynafit Hoji, however, the Zero G Scout’s construction uses a 4-buckle rather than a 3-buckle design, overlap construction versus wrap-around and they also include Tecnica's bomber Double Blocking walk mode for stability. 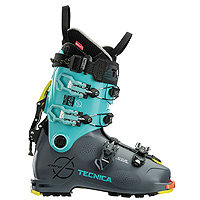 As we mentioned in our 2019 Zero G Pro Alpine Touring Boot review the Zero G series of boots have been purpose-built for touring from the ground up. In the Zero G series, Tecnica offers two variations for women: The women’s Zero G Tour Scout which is the performance option since it has a 115 flex rating, Grilamid shell/Polyurethane cuff and “Light Lock” Hook powerstrap; the Women’s Zero G Tour with its 105 flex, Polyurethane shell/cuff and 35 mm Velcro Powerstrap. 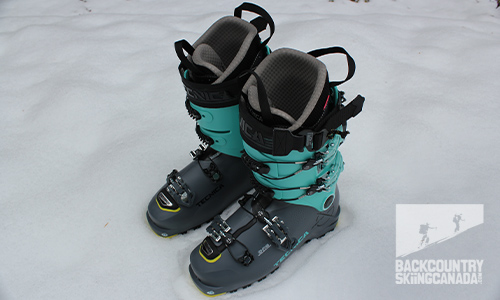 The Grilamid shell of the Zero G Tour Scout is anatomically shaped to match your foot’s shape by using Tecnica’s Custom Adaptive Shape (C.A.S.) approach. The Grilamid keeps the weight down and provides rigidity while the C.A.S. shell allows for better out-of-the-box fit. The lower boot is a narrow to medium fit, which is what you’d expect from a 99-millimeter last, if that’s on the narrow side, there are strategically placed dimple patterning supports customization by reducing surface tension, facilitating heating, and retaining the new shape for longer. 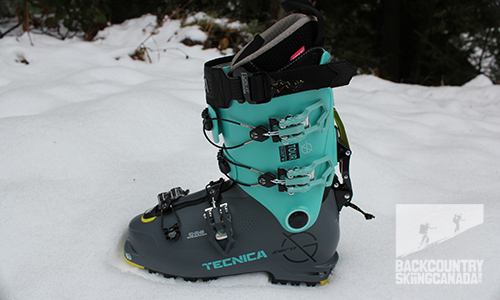 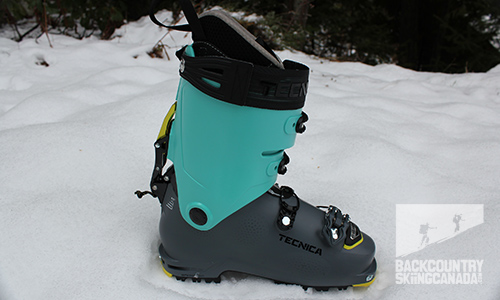 Four lightweight magnesium buckles offer adjustment that are similar to an alpine boot. The buckles can be macro-adjusted to fit wider/narrow calves and are also micro-adjustable for a fine-tuned fit. 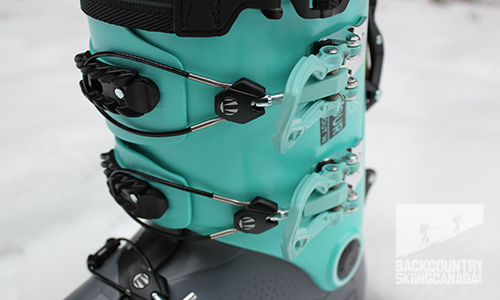 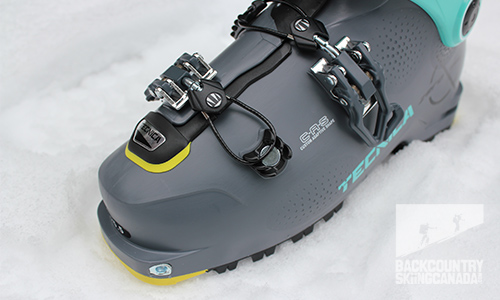 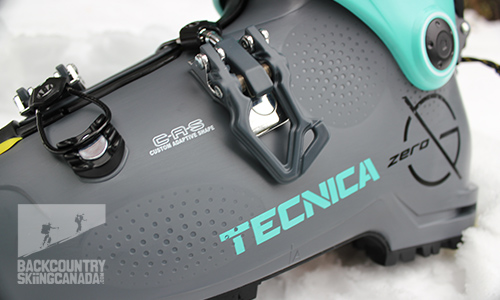 A 35 mm Light Lock Power Strap ditches the traditional power strap velcro in favour of a clasp that you can quickly release to achieve the full 55º cuff rotation in walk mode and then easily hook back up to your pre-set tension for the ski down. 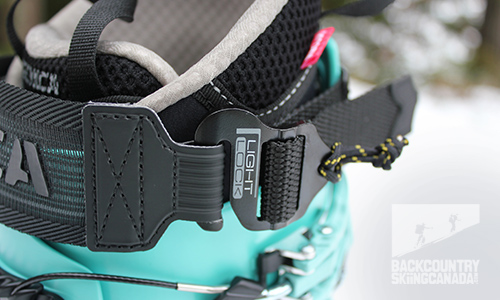 As mentioned prior, the Zero G Tour Scout is built using overlap construction, which inherently amps up its stiffness and provides a stiff 115 flex rating which places this boot on the stiffer end of the scale for a touring boot. 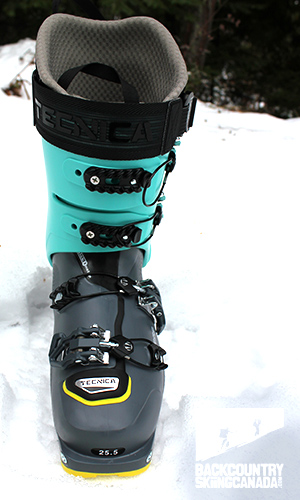 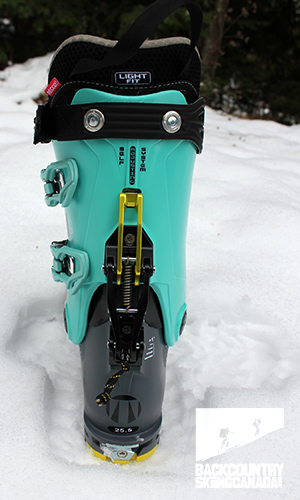 A close look at Tecnica’s Double Blocking walk mode reveals a double locking lever system that locks not only the cuff, like most other AT boots, but also the lower shell. This sturdy mechanism increases stiffness and stability and therefore performance. It reduces the bulging of the lower shell during forward flex and it’s a self-adjusting system so play that may creep in over time is also reduced. A keeper hook engages with the bottom bar in ski mode to ensure and the mechanism doesn’t switch into walk mode while skiing. 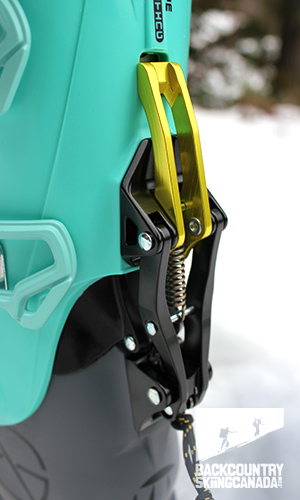 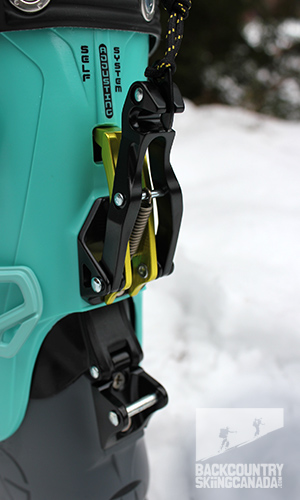 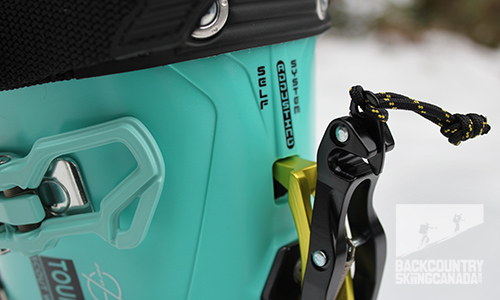 The ultralight Light Fit Women’s liner hugs the foot for supportive comfort and includes a waterproof breathable membrane to help with water management. It also features a Recco reflector, which allows rescuers to locate you with a Recco detector in the event of an emergency.   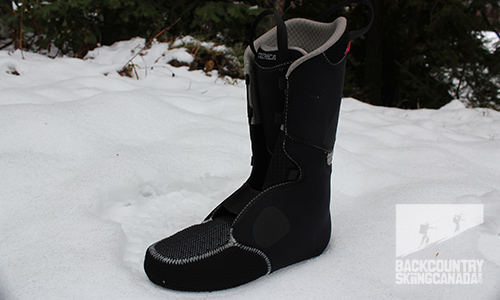 The dual-density Vibram rubber soles deliver reliable traction on icy boot packs via a softer compound in black areas and high-density rubber in the yellow toe/heel areas which supports power transmission while skiing and deters wear. 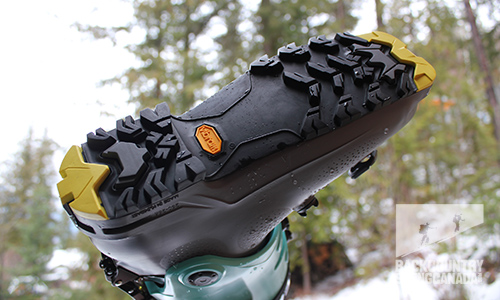 Tecnica’s Zero G Tour Scout boot for women is a solid backcountry tweener boot that balances the scales between mobility and performance. With a 99mm last the Zero G Tour Scouts fit my narrow feet beautifully out of the box, however as with any ski boot you need to have them professionally fitted if you want a truly seamless fit. I have small ankles so additional ankle padding on the liner is a necessity for me on most four buckle boots, as was the case here.

Aside from how good they feel out of the box, there are several features to love about this boot. At the top of my list would be the double locking walk mode, this brilliant design feels like one of the most secure walk mechanisms around, it’s super simple to engage/disengage with gloves on, it doesn’t ice up (which is a known problem with the Scarpa Gea RS walk mechanism) and it adds rigidity to the backside of the boot. Next on the love list would be the 55-degree cuff rotation in walk mode, which is noticeable on steeper ascents and boot packs. The overlap construction requires buckles to be disengaged to achieve the maximum 55º range, so buckling and unbuckling is integral in the transition from walk-ski and ski-walk, this is standard for most boots in this class but we are seeing touring boots these days that can transition without touching the buckles. One thing I’d love Tecnica to add here is some kind of keeper to the cuff buckles so they don’t detach completely when in walk mode, which can happen. The non-velcro “Light Lock” Hook Powerstrap speeds up transitions and keeps your preferred tension consistent. The strap can ride up the upper cuff of the shell but I can live with that for the efficiency it offers.

There is no industry standard for measuring flex ratings and ratings are set independently by manufacturers which means the numbers on flex ratings are not an exact science. That said, I felt the 115 flex rating of the Zero G Tour Scout to be an honest measure (women’s touring boots typically tap out at 120). It’s a stiff boot designed to accommodate demanding descents and/more aggressive technique if and when needed. The overlap construction most certainly contributes to the stiffness of the boot but man it can be a tight squeeze to get into especially if the boots are cold so keep ‘em warm before you put ‘em on. I have skied resort hardback, trees, and chop and found the boots to be firm and responsive in more demanding conditions once I had them properly fitted to my feet (small ankles resulted in heel lift which I mentioned earlier).

The tech binding inserts at the toe are Dynafit’s standard design so they don’t include a vertical groove to guide the binding pins into the insert at the toe, as a result stepping in at the toe requires a little more precision on your part to align correctly, it may also result in more pin-scarring of the plastic around the inserts over time.

It’s difficult to wrap up a lady boot review without commenting on aesthetics especially where it’s worth mentioning, not only are the Zero G Tour Scout boot sfor women light enough and stiff enough to have you covered for most and backcountry adventures, they are also pretty to boot.  The Zero G Tour Scouts easily rivals touring boots like the Scarpa Gea RS, while it may be a touch softer and slightly heavier it kicks arse with its double locking walk/ski mechanism. If I had to decide between the two it would come down to your individual foot shape and overall boot fit but the Tecnica Zero G Tour Scout Boots should be considered for any backcountry skier male or female as they have models for both.