With a 40 year history of designing and manufacturing some of the best paddling gear on the market, NRS has always kept up with changing trends and never been one to fall behind paddling advancements. In the past, we’ve reviews three inflatable NRS SUP’s, the NRS Thrive 11’ SUP, the NRS Quiver 10.4 SUP and the NRS Earl 6 SUP but as river paddling grows in popularity NRS now makes a variety of river boards to chose from. We got our hands on the inflatable Whip 8’ 4” SUP and have been putting it through the paces on our local rivers and lakes. The Whip is designed specifically to surf and carve on moving water but can also be used on flat water for a more relaxed paddle. Read on to learn more about the features of the NRS Whip 8’ 4” SUP  and find out how it performed throughout our testing. 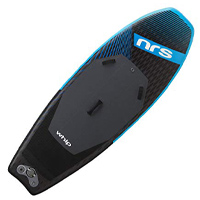 Give the following video overview a watch and see how versatile the Whip is on flat water as well as on a class 2 river.

Because the Whip 8’ 4” SUP is designed to surf moving water it’s rounder, shorter, wider and has much more pronounced rocker in the nose and tail than a flat water SUP. This allows the Whip SUP to manoeuvre quickly on standing whitewater waves and be responsive for SUP surfing. It comes with two sets of fins, a low profile fin set for moving water and a set of 2 fins for flat water. This gives the rider the ability to choose the fin set for the appropriate conditions and enables the Whip 8’ 4” SUP to paddle not just moving water but also play and chill at the lake or beach. 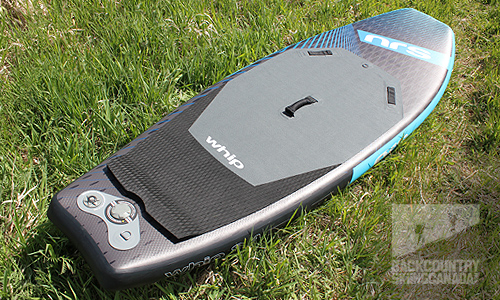 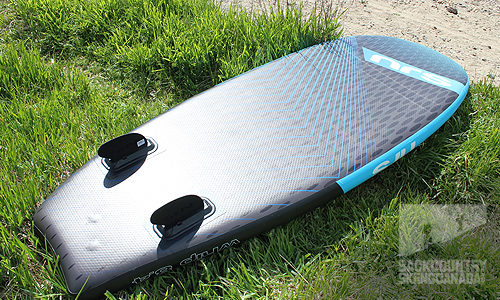 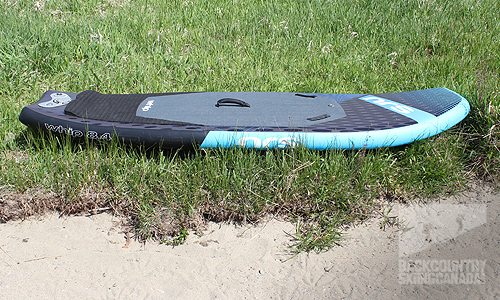 The Whip 8’ 4” SUP inflates to 20 psi (1.379 bar) for a super rigid ride and to prevent accidental over-inflation; it has a built in a pressure release valve located beside the Leafield D7 inflation/deflation valve. This allows the Whip to have a maximum paddler capacity of 180lb, while it’s not built for overly big guys it does provide a lot of float in a smaller shape. Thanks to the Whip’s heavy duty PVC material, drop stitch construction and double sidewalls for increased durability—it can take the abuse that river running dishes out. 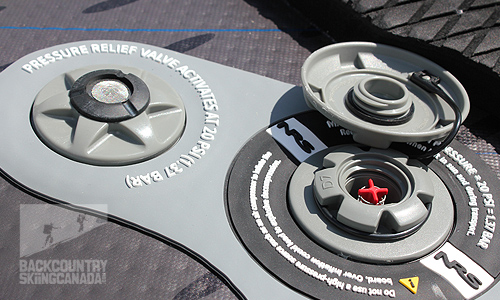 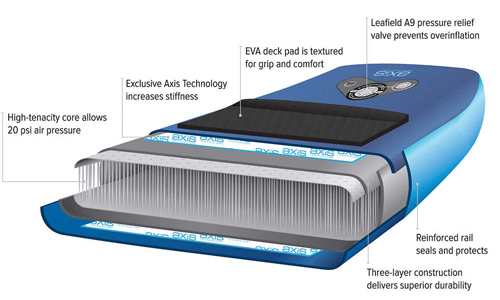 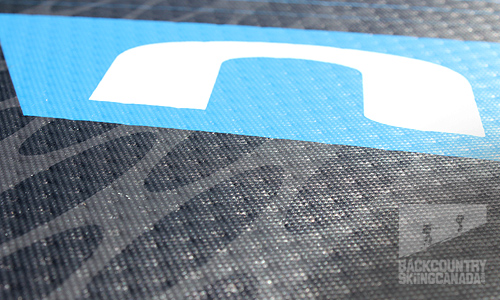 If you need to travel to far away adventures the Whip folds up into a compact Travel Pack Bag for easy transport. You can even fit the included high-pressure pump (with pressure gauge), repair kit and both sets of fins inside the pack as well. 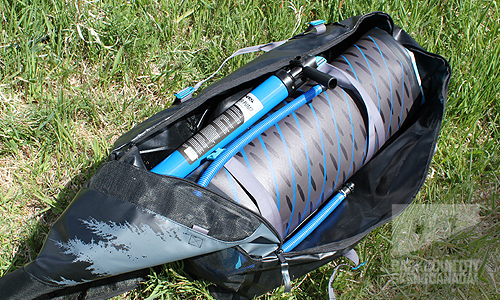 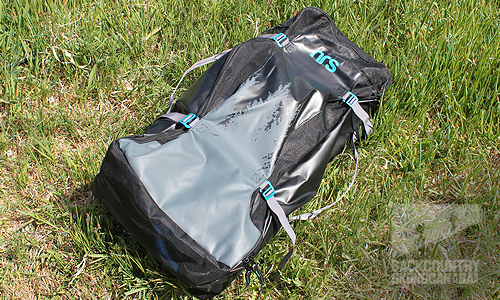 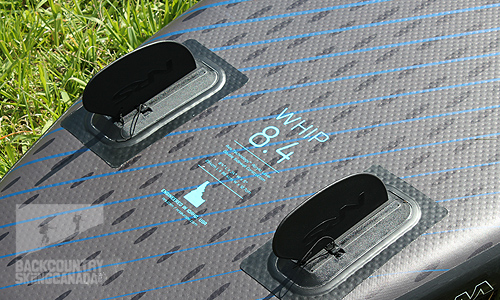 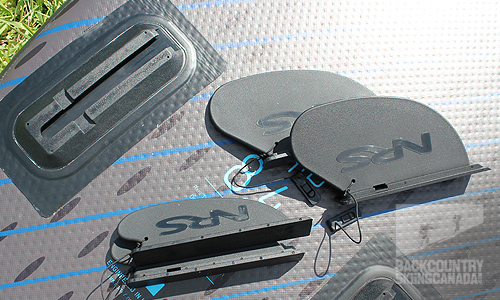 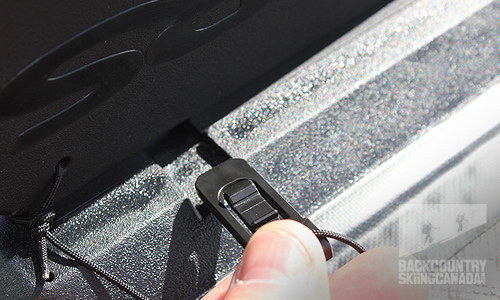 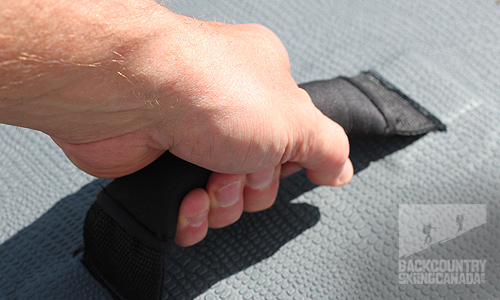 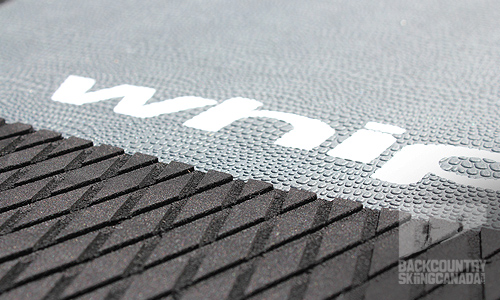 Having paddled SUP’s on flat water for several years now and combined with my whitewater kayaking background it was only a matter of time before the river called me back, but this time on a SUP. Previous to this, I’d paddle an inflatable or hard SUP that was meant for flat water and venture down Class 2 and 3 rivers. Thankfully this was short lived and I got my hands on the NRS Whip 8’ 4” SUP which is made to surf and carve on moving water. It’s made river running exponentially more fun and easier given the Whip’s shorter length, increased stability and rockered profile.

Being only 8’ 4” in length the Whip can fit into and surf smaller waves that later flat water SUP’s can’t. Its turned up nose ensures that the Whip stays afloat and doesn’t dive when pushed to the upper river side of a hole. The 34” width means the Whip is more stable side to side than most other SUP’s but you will find that front to back stability is a longer learning curve given its shorter length and rocker profile.

Because the Whip has two small fins rather than one large centre fin it doesn’t catch the current (or rocks) as much, which means that it can turn and surf on a dime and the board won’t try and buck you off when you point it across the current. This provides more fun and surfabiltiy (aka manoeuvrability) on the waves and allows you to more easily move side to side. The Whip’s aggressive rockered nose also helps with this as it stays afloat and can skim more easily across the current, however, because of this, you will notice that it is very slow to paddle on flat water.

With an inflation pressure of 20psi, the Whip is super rigid and board flex is minimized which provides a much more solid ride. I like the fact that NRS incorporated a pressure relief valve into the board so that there is no fear of it crossing the 20psi threshold which could be a very real issue given the boards all black colouring. Sitting in the hot summer sun or while in transport on the top of a car the Whip’s air pressure quickly increases so this release valve is a needed safety feature.

The only downside of the NRS Whip 8’ 4” SUP is that it doesn’t come with a leash and there are no integrated tie downs for gear so you have to improvise how to fix a dry bag to the three integrated webbing handles. I was also surprised at how fast the black graphics get scratched off the bottom side of the board—be sure to baby it or the Whip will be looking old in no time.

I’ve been paddling the NRS Whip 8’ 4” SUP on the Slocan River here in the West Kootenay’s of British Columbia and while not an overly technical river (hence why tubers frequent it), it does still have a long class 3 section and a few easy class two surf waves to play on. The Whip 8’ 4” SUP has rekindled my love of surfing whitewater and I’m sure I’ll quickly be running bigger more aggressive rivers in no time and maybe even a beach break.