Northwest River Supply (or NRS for short) has been around for over 40 years now, so needless to say they know a thing or two about kayaks and paddle boards. The “Big Earl” was NRS’s first inflatable paddle board design, spawning the Earl series which now includes a 4" and 6" thick version. At 6’1” and 175lb, I opted to review the NRS Earl 6 Inflatable Stand Up Paddle (SUP) Board, as the 4” version is a sleeker design better suited to lighter paddlers. I wanted to be able to paddle the Earl 6 in all types of water (including possibly surfing and running rivers) and needed its higher-floating profile to provide a more responsive paddle. The NRS Earl 6 Inflatable SUP holds 280 litres of air and can accommodate paddlers up to 102kg / 240 lbs, so I fit well within this allowance. Measuring 30" wide and 10’6” long, the Earl 6 Inflatable SUP is a natural choice as an all-around paddle board. It’s stable enough for beginners to paddle without fear of dunking, while remaining sleek enough to plane easily. It’s ideally suited for lake or river paddling, but also works for fitness paddling, touring, yoga, or light river running and surfing. 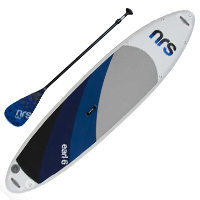 Give the following video review a watch to get a better idea of what the NRS Earl 6 Inflatable SUP has to offer, then read the rest of the review (also below). 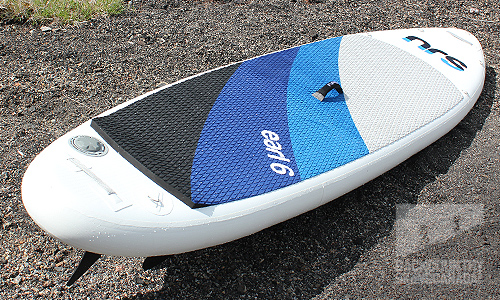 The Earl 6 Inflatable SUP is made with heavy-duty PVC-coated drop-stitch construction that’s able to withstand abrasions and far more abuse than one would initially assume. While you still have to be careful with the Earl 6, it’s definitely not as fragile as a hard stand up paddle board. To ensure you have a firm stance on the board while paddling, a diamond textured foam deck covers most of the board’s surface and offers great grip on a non-slip surface, even when wet. There are six built-in stainless D-rings which provide options for lashing down gear (bungee cord not included) or attaching a leash. There are also three webbing handles: one located at the nose, one at the tail, and the third in the centre of the board, which make handling the Earl 6 SUP easy and efficient—they also come in handy should you need to climb back aboard after a dunk.

Under the board there are three slots for fins; these secondary fins provide additional stability over the traditional single centre fin. The NRS Earl 6 comes with five interchangeable nylon fins that allow you to customize tracking and turning options to suit conditions. The two outer fins come in 2-inch and 5-inch lengths, the centre fin measuring 9-inches. The fins are made of nylon, which has some flex to it and absorbs impact to prevent breaking (a welcome feature). Inserting the fins into the board is fast and easy since they use a track and key-tab system instead of a finicky bolt and nut.

Inflation of the Earl 6 only takes about 10 minutes, and although it’s a bit of a workout, the included pump allows you to fill the SUP twice as fast; By setting the pump to the high pressure mode, it inflates on both the up and down stroke. The reliable C7 Leafield valve ensures that things remain air-tight while still allowing for instant deflation.

In addition to the pump with built-in pressure gauge, NRS also includes a valve adapter, repair kit, and backpack for carrying and short term storage of the Earl 6. This allows you to pack the SUP into remote lakes or down trails that would be difficult to trek with a traditional, hard stand up paddle board. 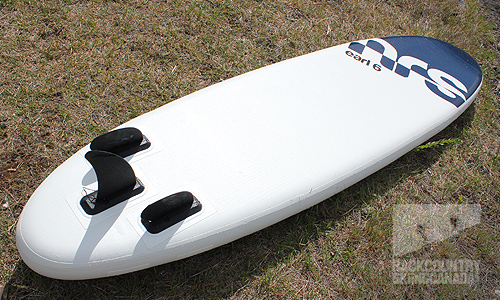 - Double sidewall construction for increased durability and streamlined aesthetics.
- Heavy-duty PVC construction stands up to abrasion and abuse.
- Nylon fins flex to absorb impacts without breaking.
- Inflates to a rock-hard 15 psi for performance that rivals a hard board, then rolls up compactly when deflated for easy transport and storage.
- Two webbing handles up front, plus one on the tail, help you hold onto the board during a swim.
- Comes with a handy carry/storage backpack, interchangeable fins, pressure gauge, high-pressure pump, Leafield valve adapter and a repair kit.
- 3-year retail warranty, 3-year commercial. 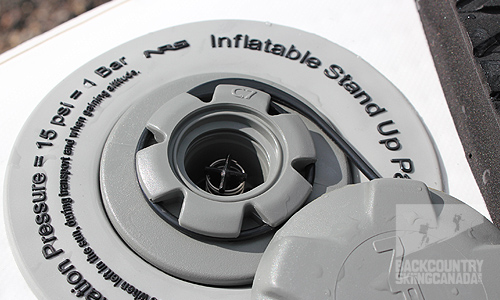 - Sturdy webbing handle in the centre of the board for easy carrying. 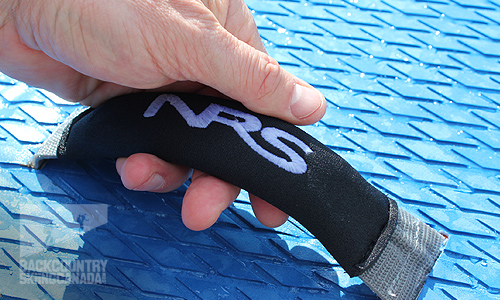 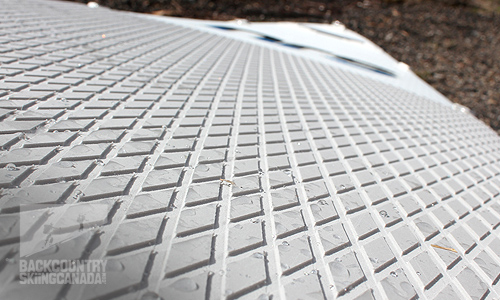 - Six stainless D-rings give you lots of options for attaching gear and a leash. 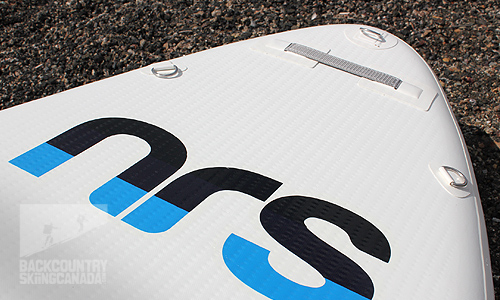 - Removable, interchangeable fins let you customize your board for tracking and turning to suit the water you're riding. 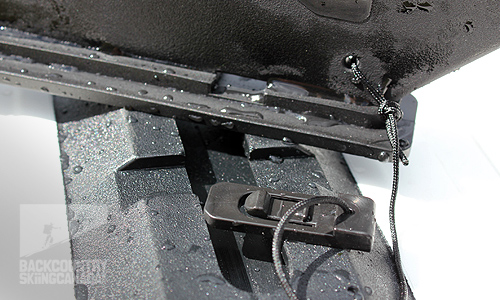 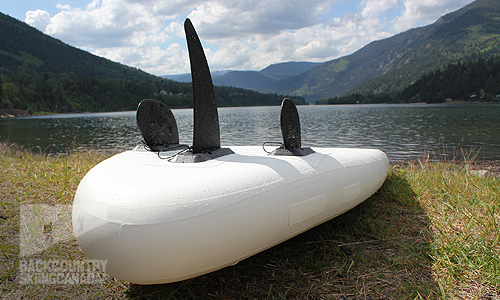 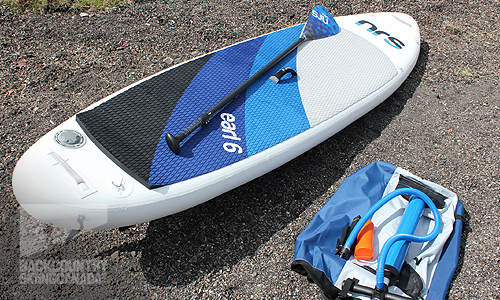 The NRS Blitz SUP Paddle is not only lightweight but also very versatile. Thanks to its carbon fibre construction, it provides a stiff, responsive stroke while only tipping the scales at a measly 562g / 1.24lb (for the size 64-81”). The mid-sized blade measures 21.6 x 45.75cm / 8.5 x 18” and has a surface area of 625sq cm / 97sq in. This allows it to be versatile enough to fit most paddlers and any style of paddling. It comes in three lengths, 60-76”, 64”-81”, 68”-86”. For surf or whitewater paddling be sure to choose a paddle 8" longer than your height. For touring/racing or fitness and Yoga, choose a paddle 10" longer than your height. The NRS Blitz SUP Paddle retails for $274.95US and is easily one of the most efficient paddles I have had the opportunity to use. It’s now my favourite paddle given its weight and ease of adjustability.

The length adjustment is built into the shaft so its quick and easy to use but still out of the way of your grip. 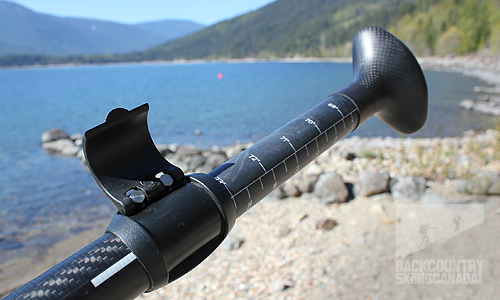 A nice big fat blade for power, but still light weight so you don't get tired as fast. 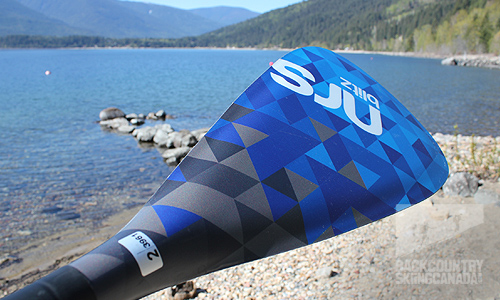 The big advantage of an inflatable stand up paddle board is that it’s much lighter to haul around than a traditional hard board, and you don’t have to invest in a roof rack for your vehicle in order to transport it. The NRS Earl 6 Inflatable SUP folds up to a compact 84cm x 45cm x 15cm / 33" x 18" x 6" size and fits into its own backpack, which is included in your purchase. The backpack option is super handy as it allows you to stop and do errands heading to or from the water without having to worry about your SUP getting stolen (as it isn’t strapped to the top of your vehicle). The packability of the Earl 6 also eases access to remote alpine lakes and other water bodies, and makes it convenient for airline travel since you can simply check the entire pack! While you can store the Earl 6 in its pack, I would not recommend this for long term storage. Instead, I would suggest leaving it flat, with a few pounds of pressure in it so that it holds its shape without exerting pressure on the seams.

The included “Super-Pump” is a manual high volume pump that has two settings, one for high and one for low pressure. The high pressure setting effectively cuts inflation time in half from traditional pumps. I found that the NRS Earl 6 took about 10 minutes or less to fully inflate, but this depends heavily on your fitness level. Able to pump up to 20 psi, the Super-Pump is over kill for the Earl 6, since it’s recommended that you only inflate the board to 12 psi. This is a little lower than other inflatable SUP’s we tested, but thanks to its six-inch thickness, it didn’t flex too much while paddling (other than in very wavy conditions). Most manufacturers save money by including a low end pump with their inflatable SUP’s, but the super pump that ships with the Earl 6 is quite nice, with a built-in pressure gauge that’s accurate and sturdy. I did have some concern about the metal hose clamp at the end of the hose, as it looks like an afterthought; perhaps a solution to a previous issue?

NRS also includes 5 fins so you can mix and match depending upon water conditions and your paddling mood. Again, this is a nice feature that most other brands do not include with their SUP’s. I typically paddled with the 5” secondary fins and the 9” centre fin, as this maximized stability and tracking. The centre fin is all you really need for flat water paddling. But if you’re a beginner, I recommend using the secondary fins as well to maximize stability.

The backpack that comes with the NRS Earl 6 was adequate in its design but I much prefer the flap pack style that comes with Boardwork SUP’s such as the Shubu Raven. The flip pack design makes it easier to pack and un-pack the board. The NRS pack could also do with a hip belt and load lifters to allow it to better accommodate the weight on longer journeys.

Overall, I found the NRS Earl 6 SUP to be super stable, easy to paddle, and fairly responsive. I didn’t find it especially fast, but it tracks well. While the overall performance was what you’d expect from an all-round board, it didn’t really stand out in any single category, but rather performed well in each. Most importantly it is a fun, easy paddling SUP that the entire family could enjoy.