Line Ski’s offers three options in their Vision ski family, the 98, 108 (which we’ve already reviewed here), and the new for this season 118 which incorporates the lightweight fun philosophy into a wider platform for big powder performance both in and out of bounds. Given how well the Vision 108 ski performed and how much fun it was to shred on we figured it only made sense to get a pair of the Vision 118’s underfoot and put them through their paces. The 118's are a versatile big mountain ski that charges in any terrain and yet is still light enough to bank serious vertical. 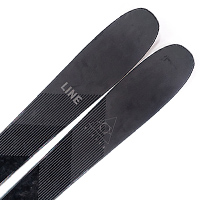 Watch the following video review for all the details on the new Line Vision 118 skis.

While Line Skis markets the Vision 118 as a “freeride” ski and not a touring ski, it is light enough at just 3,800g / 8.37lb (for the 183cm length) to be a serious backcountry contender yet it’s stiff and stable enough to be a resort powder ski. 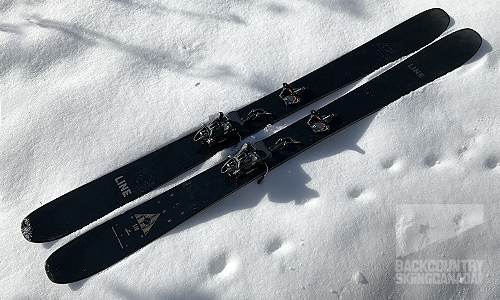 The Vision 118 have generous tip rocker to provide plenty of float in deep snow and chop with a medium tail rocker in the back to provide some creativity in the turns and maybe even some time in the park. 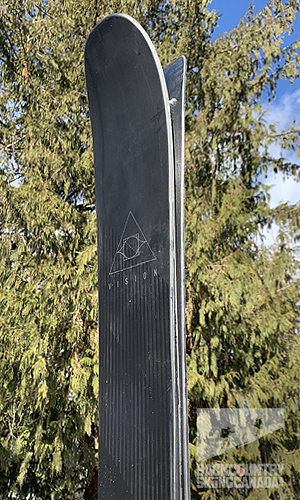 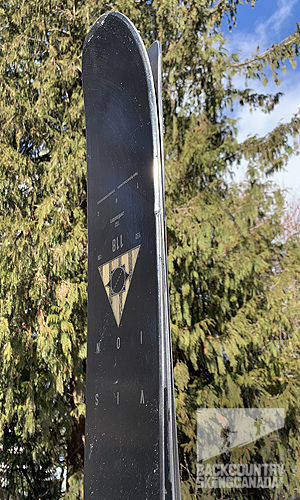 Underfoot you’ll find just 3mm of camber to provide a little pop out of the turns and keep a large amount of the ski’s effective edge in contact with the snow for powerful turns. 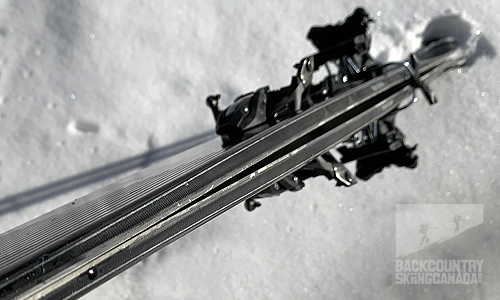 The flex of the Vision 118’s are marginally stiffer than the 108, however like the 108’s that we previously reviewed they are not a very stiff ski which makes them very forgiving. From the tips of the skis, there is a slow yet steady increase in stiffness towards the middle with the tips and tails being only moderately stiff themselves.

Like the 108’s, the Vision 118 skis are a fairly damp and sturdy platform from which to slash pow lines, stomp landings, and link up turns. Their weight is impressively light for their size and like the rest of the Vision Skis, they are packed with a lot of tech. Since the Vision 118’s are simply the big brother of the 108’s they naturally have all the same technology under the hood as you can see below:
Triple Hybrid Construction (THC)
This is more than a clever play on words but I am sure the good folks at Line didn’t create this acronym by accident. THC is the combination of Aramid (similar to Kevlar), Carbon fibre, and Fibreglass into a proprietary stack laminate. Because these elements are said to vibrate and resonate at different frequencies, they effectively cancel each other out with the end result being a damped ski experience without additional weight. Those pingy-jitters that carbon can sometimes introduce into a ski are smoothed out which makes for a better ride. 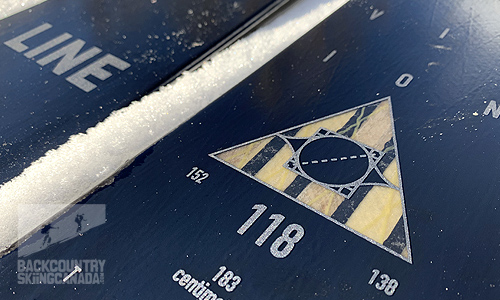 5Cut Multi-Radius Sidecut
This is the combination of five different radiuses which are blended into the ski’s sidecut at various locations starting with a smaller radius in the tips and a larger one underfoot then decreasing is size once again towards the tail. This helps provide a variety of turn shapes and an intuitive feel. With the widest part of the sidecut tapering earlier in the tip and tail, this helps reduce hooking when skiing. 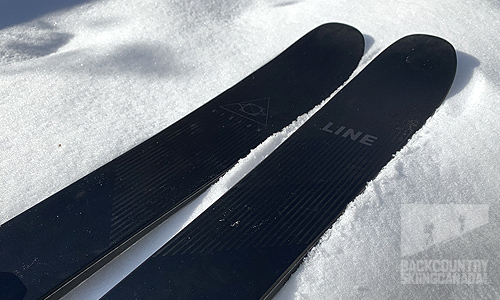 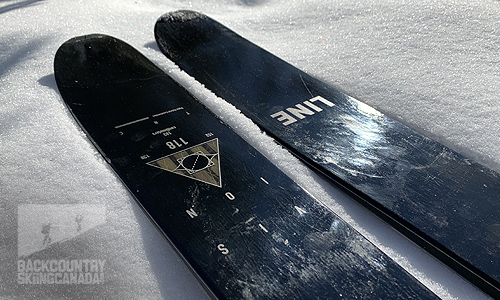 Core Partly Cloudy
Line uses a blend of lightweight Paulownia and Maple woods in the Vision 108’s core in order to create the best strength to weight ratio for these skis.
Thin Tip
Using a thin core & sidewall in the tips of the Vision 108 Skis means they are 100 grams lighter per pair which helps reduces the swing weight & tip bounce.
Early Taper
Line has designed the widest part of the sidecut to begin tapering earlier in the tip and tail of the skis which reduces hooking. 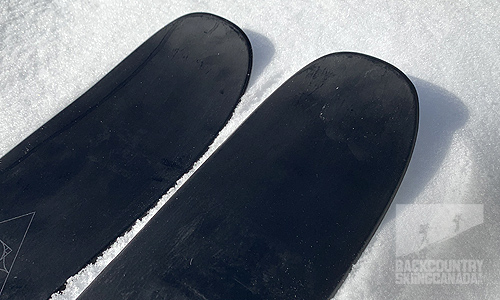 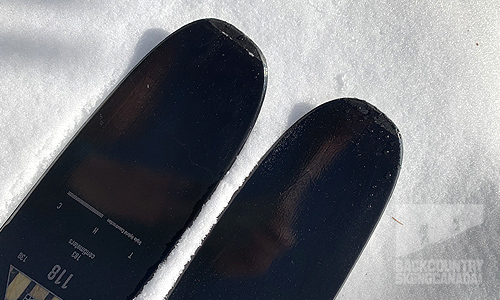 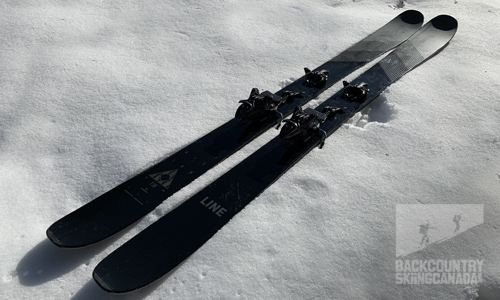 After reviewing the Line Vision 108 Skis I knew that I’d immediately like the 118 version since they'd play well with the amount of snow we get here in the south end of the Canadian Selkirk Mountains. While the Vision 108 Skis were ideal for big days in the backcountry the 118’s are perfect for carving up big dumps in the backcountry. The Vision 118’s are the big brother of the 108 skis and are wider by exactly 10mm from tip to tail which is why they are a little heavier but also much more fun in top of the boot pow.

While the Vision 118 is a light ski for its dimensions, it’s not quite as ultralight as those in the DPS Tour or Black Diamond Helio lines, the 118  is more of an all-mountain touring ski like the Rossignol Blackops Sender Skis, just not as heavy. To ensure that they could not only slay powder lines but also enjoy more aggressive skiing in bounds and out I mounted them with a pair of the new Marker M-Werks Kingpin 12 Bindings which are about the lightest pair of all-mountain AT bindings there are.

Given their 152/118/138 dimensions, wide stance, and fat shovel it’s pretty obvious that these skis will be more than capable and heaps of fun in deep pow but I wanted to know how they’d ski like in variable snow conditions and on groomers.

While not designed specifically for skiing groomers, the Vision 118’s were able to carve thanks to their long effective edge and minimal camber sandwiched in between the tip and tail rocker. At speed, I was able to transition the ski from edge to edge with relative ease for a ski of this width. Surprisingly the edge hold was impressive on softer snow but did become more challenging on super hard-packed snow due to the tip chatter vibrating up the ski at times. While the Vision 118’s are normally quite damp the combination of bulletproof groomers and high speed did require some extra focus and muscle to keep them on course.

These skis like to go fast and reward you with several smile-inducing G’s as you carve long pronounced GS turns with confidence. Laying the Vision 118’s over on edge was relatively easy, however, tighter radius-linked turns were a little slower given this ski’s girth. In broken powder, chop and variable snow the Vison 118’s plowed through it all without hesitation or deflection which was surprising given that they don’t have the mass behind them of a ski like the Rossignol Blackops Sender Skis.

While not a true twin tip ski (let’s call it a partial twin tip) the tails of the 118’s provide enough early rise that you could hit the park or ski switch, both of which I have no interest in doing, but the option is there if you’d like.

The Line Vision 118 Skis are made for deep snow days that you typically find on the coast where as the 108’s are more of a traditional Rocky Mountain and East Coast ski where you don’t usually see stupid amounts of snow. If you want to plow through bottomless pow in the backcountry or charge down leftover broken snow at the resort then these are the skis for you. This directional partial twin tip ski can be enjoyed pretty much anywhere there is soft snow and if Mother Nature doesn’t comply then you can still have some fun, or switch them out to the 108’s!