Line is touting their new Vision 108 (and 98) Skis as ’lightweight all-mountain freeride skis’ but they neglect to mention that, due to the Vision’s light weight dimensions, they are also more than capable for ski touring. Their tip shape, sidecut, and rocker profile ensure that they’ll be playful and super fun to ski. The fact that the Vision 108’s come in at just 3,210g is what’s really impressive. 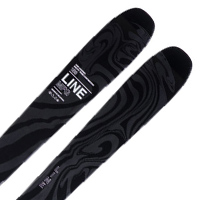 The simplified all-black top sheet design is distinctive and unassuming and oh-so-appealing. 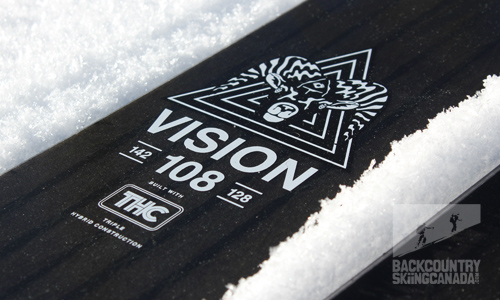 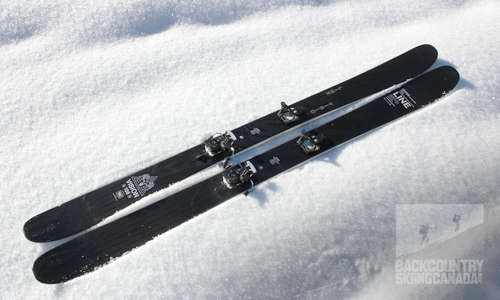 The Vision 108 Skis have a moderate amount of rocker in the tip a bit less in the tail and a slight amount of camber underfoot. Classifying this ski as a true twin tip may be a stretch as the turned-up tail isn’t as significant as a full twin, so let's call these a ‘partial twin’. 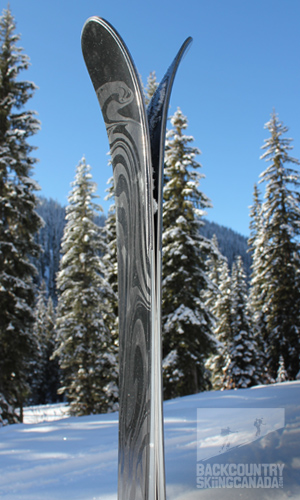 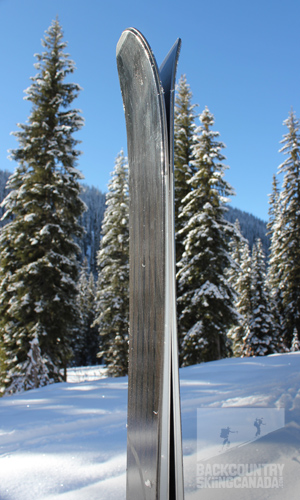 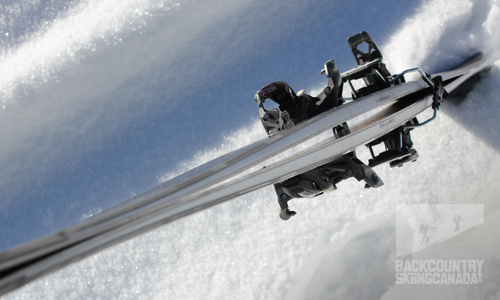 The ski’s longitudinal flex profile consists of medium stiffness underfoot with softer tips and tails which makes them fun and playful while not washing out in the turns when on edge. This more forgiving flex pattern in addition to the use of  THC construction (not what you think but ore on this below) results in a nice damp ride compared to other skis in this weight category. 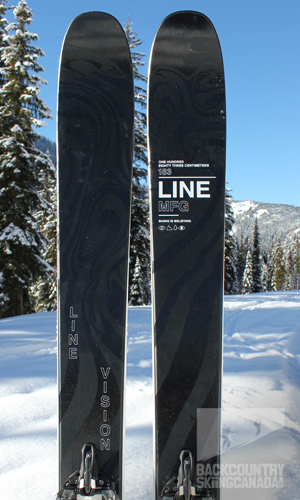 Line wanted a ski that was “Stable at speeds, light in the air, and easy to smear” and with a very slight amount of taper in the tip and more pronounced taper in the tail they lend themselves well to these very characteristics. 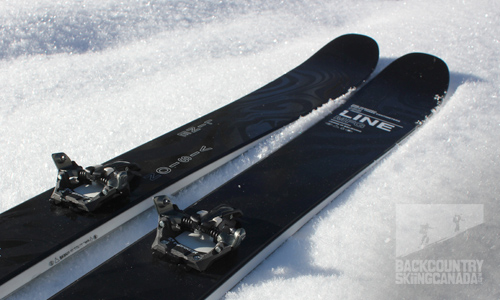 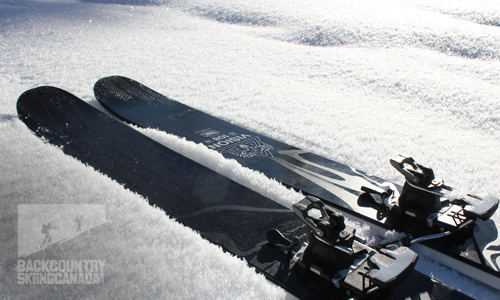 Let's look at the features of the Line Vision 108 Skis so you can better understand how they could make such a light yet playful and confident ski.

Triple Hybrid Construction (THC)
This is more than a clever play on words but I am sure the good folks at Line didn’t create this acronym by accident. THC is (when talking about the Line Vision 108 and 98 Skis) the combination of Aramid (similar to Kevlar), Carbon fibre, and Fibreglass into a proprietary stack laminate. Because these elements are said to vibrate and resonate at different frequencies, they effectively cancel each other out with the end result being a damped ski experience without additional weight. Those pingy-jitters that carbon can sometimes introduce into a ski are smoothed out which makes for a better ride.

5Cut Multi-Radius Sidecut
This is the combination of five different radiuses which are blended into the ski’s sidecut at various locations starting with a smaller radius in the tips and a larger one underfoot then decreasing is size once again towards the tail. This helps provide a variety of turn shapes and an intuitive feel. With the widest part of the sidecut tapering earlier in the tip and tail, this helps reduce hooking when skiing.

Core Partly Cloudy
Line uses a blend of lightweight Paulownia and Maple woods in the Vision 108’s core in order to create the best strength to weight ratio for these skis.
Thin Tip
Using a thin core & sidewall in the tips of the Vision 108 Skis means they are 100 grams lighter per pair which helps reduces the swing weight & tip bounce.
Early Rise
The Vision 108's have a rocker Profile of 10mm in the tip with 2mm Camber underfoot and 8mm or rocker in the tail. This helps lift the tips and tails up off the snow and brings the contact points closer to the centre of the ski which increases the Vision 108’s float in deep snow and allows it to engage more quickly on hardpack. 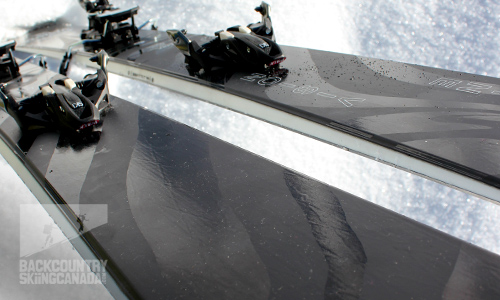 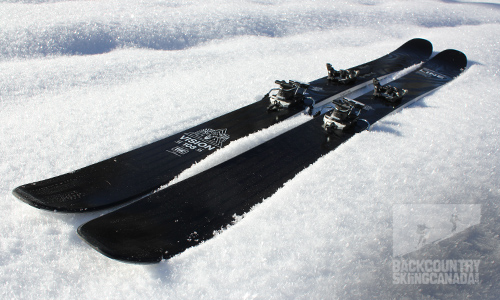 As I stated at the beginning of this review, Line defines the Vision 108 Skis as “lightweight all-mountain freeride skis” and I would agree with this for the most part. The Vision 108’s easily initiate turns and are very fun to ski. Their personality is playful and they can slide, slarve, smear, surf and carve with relatively minimal effort, heck, you can even ski them switch should you want—although definitely not my thang.

On groomers these skis don’t automatically rail turns, they initiate well but then a little more forward pressure is required to fully commit to the turn. Do this and edge hold improves vastly, hold back and they’ll tend to slide more than carve. Their soft flex combined with their lightweight creates a ski that’s incredibly nimble and since there's tip and tail taper your chances of hooking in the turns is just about zero.

The early rise tips and tails, while providing good float in pow means there is less ski on the snow which is another reason that they are so manoeuvrable and less carvy than other skis. The fact that the Vision 108’s have softer tips and tails when compared to that underfoot means that you’ll give up some stability (especially at speed) for playfulness. However, given how light the Vision 108’s are they are impressively damp. This is not to say you won’t see some tip chatter on hard-packed groomers, you will, but this is not a ski designed to rip huge GS turns and the chatter is not excessive given the ski’s light weight and it won’t really impact the performance much.

It’s challenging to find such a surfy ski that can still carve, but the Vision 108 is capable of both if you know how to drive them. I much prefer a ski with little to no tail rocker so that I can complete a turn with conviction but if I really press the Visions they’ll react as needed. When the snow is firm, chopped up or just plain crud then the lack of weight behind the Visions 108’s is more noticeable. They tend to get pushed around as they just don’t have the mass to power through, having said this their capabilities are still impressive, again, given there weight.

The Vision 108 is an incredibly versatile ski in bounds if you like to play and aren’t looking for the most rigid of carvers but given their lightweight, I think they are ideally suited to backcountry tours. These skis are super light and at home in untracked backcountry pow, however, as with in-bounds skiing once things get more tracked or firm up then that is when you have to be on them and rein in the acceleration as they simply don’t have the mass to drive through challenging snow.

Overall, if you want a lighter weight ski that’s most happy in soft snow and off the groomers, then this may be the ski for you. Especially if you’re not looking to lap bump runs and just want a super fun and playful ski in and out of bounds. If you're resort skiing 100% of the time you’ll be perfectly happy with the Vision 108’s but given how light they are I think you’d be missing 50% of the equation. While the Vision 108’s aren’t designed specifically for ski touring they do a pretty good job of it!