Dynastar has taken what it’s learned and perfected in their freeride touring Mythic Skis and has now applied it to a new range of M Skis which includes the M-Free, M-Pro and M-Tour Skis. All three of these skis use Dynastar’s Hybrid Core technology but its composition is altered depending upon the ski’s performance objectives. The M-Pro Skis are a beefier all mountain skis that excel at the resort and use a Hybrid Core with PU, Poplar and a full layer of Titanal. The M-Free’s are a slightly lighter all-mountain touring ski when compared to the M-Pro Ski’s and use a Poplar PU Hybrid Core with Fibreglass Torsion Box reinforcements. The M-Tour Skis swap out the Poplar wood found in the M-Free Skis and instead use Paulownia wood which makes these skis even lighter. In addition to this they keep the PU for its ability to smooth out bumps and vibrations and add to it a Basalt Fibre V2 reinforcement layer that has similar mechanical properties of fibreglass but with a 25% weight reduction. 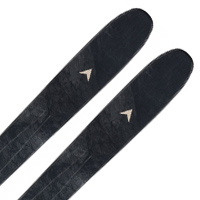 Given that the M-Tour Skis are the lightest in the Dynastar line, we decided to review the 99 rather than the 87 width version as it maintains a more than respectable weight while also being wide enough to perform well in deeper snow that one typically finds in the backcountry. 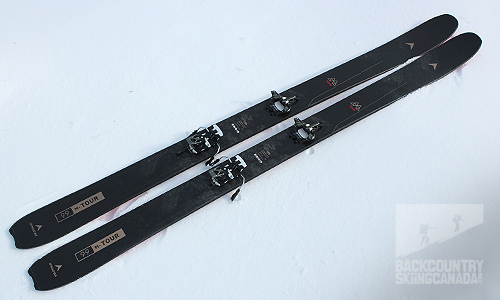 By taking the Mythic Ski construction and lightening it up with Paulownia or Poplar Wood and combing it with PU and other materials (Titanal, Fibreglass or Basalt) Dynastar has created a touring focused range of skis that still maintain the spirit and legendary skiability of the Mythic skis that are so-well loved. 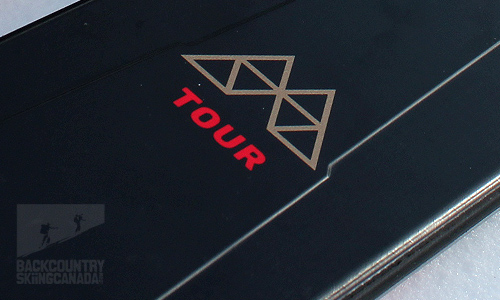 Dynastar's M-Tour 99 Skis utilize the same versatile freeride shape of the M-Pro 99 skis (albeit slightly narrower in the tips and tails) but they have reduced the weight down from over 4 kilograms per pair to approximately 2.7 kilos. Dynastar has altered the ski's lay-up and construction to create a lightweight backcountry specific ski in the M-Tour 99 and they did this by using a modified Hybrid Core technology which consists of a Paulownia Wood at the heart of the ski in order to reduce weight combined with PU to provide the same dampening characteristics of heavier woods. This core is then reinforced with a layer of basalt fibre given its unique absorption properties and 25% weight reduction when compared to fibreglass. The result is a ski that doesn’t sacrifice downhill performance for the ease of uphill climbing and what Dynastar describes as an “energetic, stable and light ski” that rides smooth in a variety of snow conditions despite its diminutive weigh. 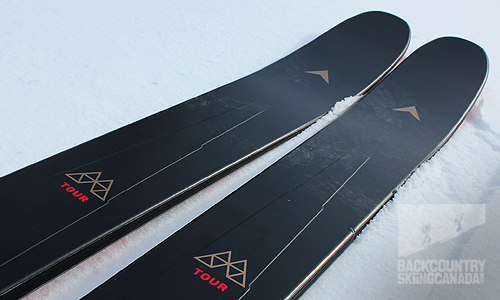 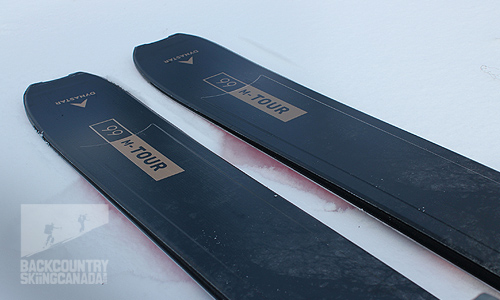 A very pronounced yet gradual rocker profile can be found on the tips of the M-Tour 99 Skis. Starting off slow lower down on the tips it increases exponentially as it approaches the ski's tips providing good float in deep snow while maintaining maximum edge contact with the snow. In the tails there is very little rocker and more of a subtle upturn the last three inches of the skis which mean you can easily perform kick turns on the skin track should that be required. 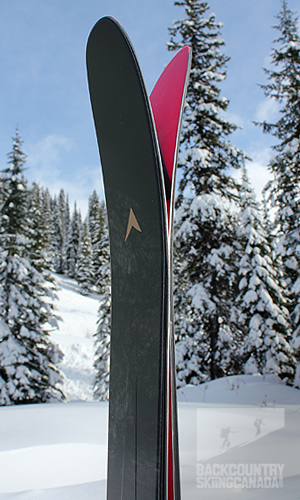 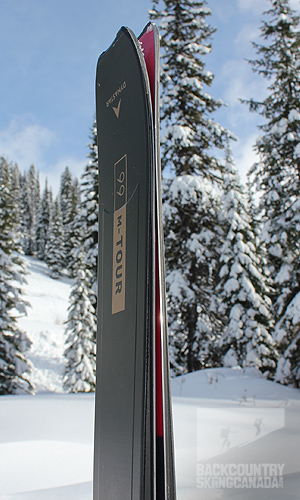 Between this directional rocker there is a long and generous amount of camber under foot which pre-loads the ski and provides rebound from turn to turn and grip on hard snow when it's laid on edge. 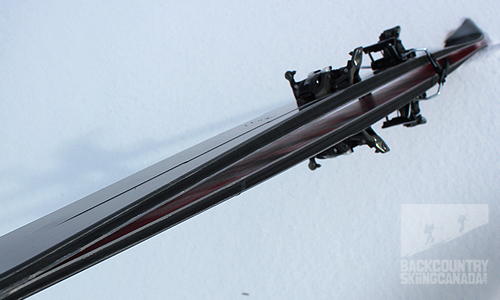 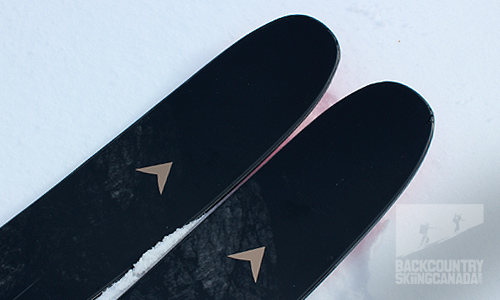 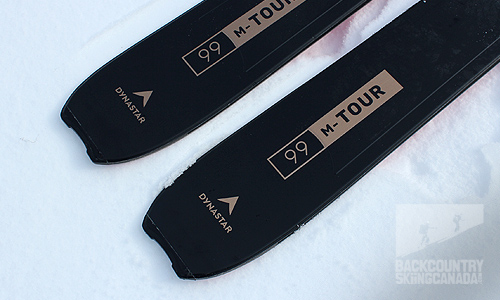 Hybrid core: The Polyurethane Hybrid Core technology is combined with a Paulownia Core with a density of 300 g/m3, reducing the ski's weight by an average of 15 to 20% in comparison to a poplar core.
Reinforcements: Basalt Fibre V2
Sidewalls: Full sidewall sandwich construction

While I enjoyed skiing on the Dynastar M-Tour 99 Skis and found them to be incredibly light on the up-track I am more than willing to forego some of the weight savings for a little more girth or overall surface area to make skiing deep BC powder that much easier (not to mention broken pow and chop). Given that the 186cm pair only weigh 2.7kg / 6lbs you can be guaranteed you’ll absolutely love the M-Tour 99 Skis on the uptrack, it is simply effortless to climb with these skis underfoot, especially when you pair then with the minimalist Marker Alpinist 12 Bindings. This is one crazy-light dedicated touring set up.

I'd have to say that my ideal ski width is 105mm underfoot—given that I weight 180lb, ski fairly hard and live in the Interior Mountains of BC, where we get a lot of snow. A lot. So 99 underfoot which the M-Tours are, is flirting with the limit of too narrow for this ski reviewer. I would have liked if Dynastar made a wider M-Tour Ski as they do in the M-Free line with their 108 version, only keep the weight way down from the 4-kilo range that these skis weigh in at. Even adding just a little more width in the tips would help immeasurably with the floatability of such a narrow waisted ski as the M-Tour 99. Consider G3’s FINDr 102 Skis (which also use a layer of PU in their construction), while just 3 mm wider underfoot they also have a very helpful additional 6mm upfront and 3mm in the tails with a weight penalty of only 300grams. This is a trade off I’d be willing to consider so that the M-Tour 99’s could float a little more effortlessly. This is not to say they don’t float well in pow, it just takes a little more effort if you are skiing in the Coastal or Interior mountains where it can get stupid deep, stick to the Rockies or the East Coast and you’ll have no issues what so ever. Having said all that, if climbing with as little effort as possible is what you are all about then simply ignore my earlier comments and climb on.

When not boot deep in powder turns I skied the M-Tour 99 Skis in every other type of snow imaginable—crud, chop, broken pow and even re-frozen groomers. Even though the M-Tour 99 Skis are positioned as the most capable and dedicated touring ski in Dynastar’s lineup they should still be fun even when Mother Nature is not so accommodating with the white stuff. While skiing groomers I did notice a fair amount of tip chatter despite all the PU and Basalt Fibre technologies wrapped up in these skis. While it was not debilitating it was certainly noticeable and did at times affect the overall conviction of the skis if you were not confidently on them. While they don't provide an overly damp ride on hard snow the vibration was mostly confined to the front end of the skis and they performed fairly well considering they’re a lightweight touring ski designed for powder. Again, because of their lightweight construction when I skied them in chop or variable snow conditions they did tend to deflect more than plow through obstructions.

Laying down turns on fresh corduroy was fun, however, the edge hold and confidence was not as high as it could have been and turns tended to wash out despite their relatively flat tail design. This was especially true on firm, hard or icy snow but in the end they will get you down the mountain. I am certainly not trying to be overly critical of the M-Tour 99 Skis, they do what they're designed to do quite well but a quiver of one ski this is not. If they had a little more width like the Blizzard Zero G 105 Skis which are marginally wider in the tip, tail and underfoot with a mere 400g weight penalty, I am sure the M-Tour's all-terrain skiiability and edge hold would be vastly improved and get them closer to that elusive quiver of one ski.

Don’t get me wrong, the Dynastar M-Tour 99 Skis are very proficient at crushing the vertical and lapping backcountry lines where the snow is not stupid deep, you just have to be prepared to work them a little harder should the conditions get more challenge.