Salomon has always been a rock solid alpine ski brand, and over the past few years it has evolved into a backcountry contender. With the help of fellow Canuck Greg Hill, Salomon has been expanding and improving their backcountry ski offerings to include: apparel, packs, poles, skis, boots, helmets and hopefully soon, a light-weight tech binding. Their MTN series ski comes in three different flavours: the MTN Explore 88 (88mm underfoot), MTN Explore 95 (95mm underfoot) and the MTN Lab which is 114mm underfoot. See my review of the MTN Lab Skis here. 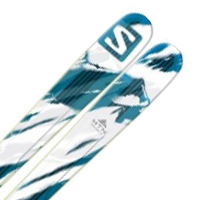 The new MTN Explore 95 Skis are specifically built for backcountry skiers and use Salomon’s Space Frame 2.0 construction; with less swing weight in extremities and more mass, and thus more power, under foot. The MTN Explore 95’s are chock-full of technology and features, including a full 3D wood core for stability and control that simultaneously reduces weight. CFX Super Fibres are also used in the build; 60% carbon fibre and 40% flax is laid over the top of the skis core, and runs throughout the full length of the ski. This provides strength and stability, with an increased level of dampening and vibration absorption. Finally, there is Salomon’s aptly named “G-Spot Technology” which features side-cut and rocker profile; it’s said to focus edge grip directly under foot for easier climbing, increased edge grip, and a more efficient stride and glide. 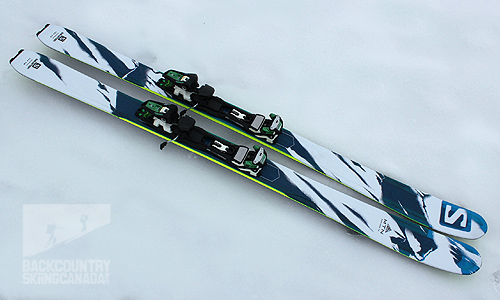 On the shape side of things, the Explore 95 Skis use Salomon’s ‘MTN Rocker’; composed of a moderate tip rocker, camber underfoot, and a relatively flat tail. This allows them to float in powder and technical snow conditions, while making them easy to turn on groomers, and maintaining stability and edge hold for longer GS style skiing. The camber and flat tails provide plenty of rebound out of the turn, while still being playful and stable at speed. The honeycomb structure built into the tips reduces chatter to negligible amounts, while a built in skin notch in the tail ensures your climbing skins won’t fall off on the up-track.

Over all, the Salomon MTN Explore 95 Skis are a lightweight but stable and fun ski, ideal for long approaches, big days in the backcountry, or simply lapping up the resort. Have a watch of the video review below to learn more:

Karuba Core is a lightweight laminated 3D full wood core with liveliness and durability.
- Full Sandwich vertical ABS sidewall construction delivers edge hold on harder snow.
- CFX Super Fibre is a strip of woven 60% carbon fibre and 40% flax which is laid over the top of the core during construction, adding both strength and smoothness.

- Space Frame 2.0 Construction provides power where needed when skinning up and skiing down.
- Honeycomb Tip lightens the ski at the tip for improved swing weight.
- Five-point side cut is narrow at the tip, wide toward the middle, narrow under foot, wide again towards the back, and then finally narrow at the tail. Count them up, and you get the five points.
- Carve Zone is the traditionally cambered section of twin rocker skis, where the sidecut is focused for more power, energy and edge grip.
- 3D Full Wood core optimizes a balance of stability and control, while reducing weight.
- G-Spot Technology is engineered with sidecut and rocker shape, focusing maximum edge grip directly under foot when in touring mode for easier climbing.

- Skin Clip Tail has a precut notch in the tail of the ski to allow for quick, easy, and secure attachment of climbing skins. 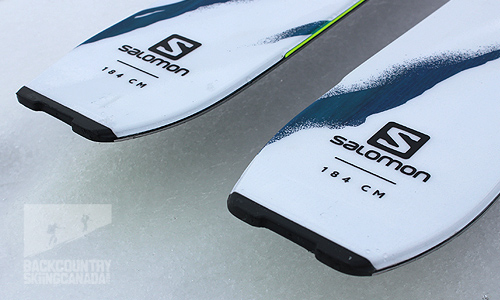 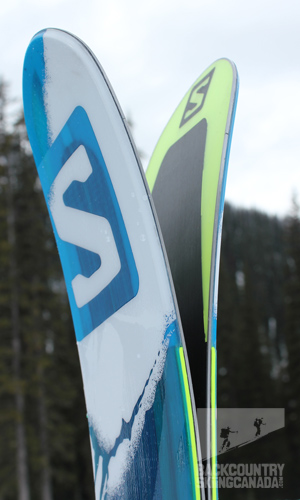 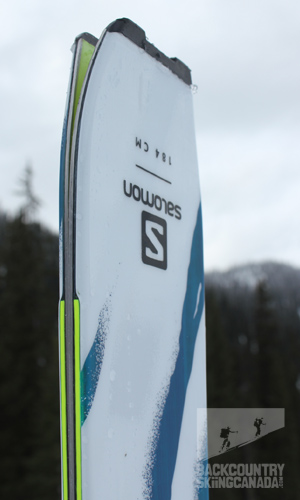 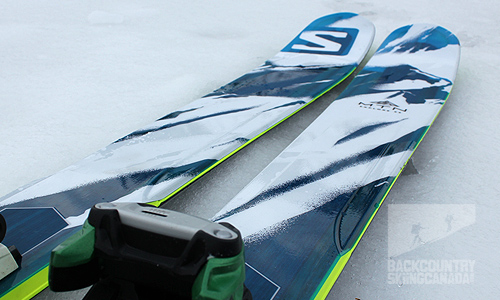 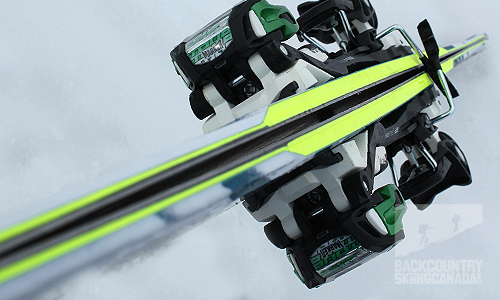 - step down sidewall for a lighter overall ski that can still plow through snow. 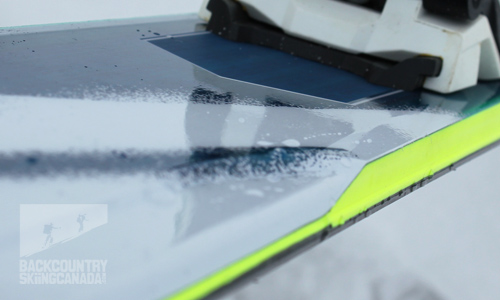 - More mass in the centre of the ski for torsional rigidity. 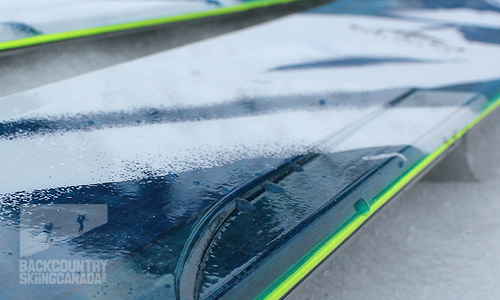 What can I say about the Salomon MTN Explore 95 Skis other than, I luv ‘em?! Salomon has been refining their ski touring line up over the years with a marked improvement each and every year; the MTN Explore 95’s are no exception. Last season Salomon released their Q BC Lab Ski, and while they performed well, I did find them a little too fat for everyday use, and also stiffer that I’d prefer.

I’ve been skiing the Salomon MTN Explore 95 Skis around my home resort of Whitewater, and at Silver Star Ski Resort in Vernon, BC. Even though the MTN Explore 95’s aren’t meant to be a resort ski, I was really impressed with their ability to tackle bumps, ice, crud and chop. I was all smiles ripping up groomers with tight slalom turns and long arcing GS turns alike. These are seriously fun skis in-bounds with virtually no tip chatter. Given the honeycomb tip construction in the Explore 95’s I knew that this would be the case, as that’s what I’ve come to expect from the previous Salomon ski reviews. The MTN Explore 95’s real glory, however, shows on the up-track, tipping the scales at under 3kg per 177 pair; these are light skis that climb with ease. At 95mm underfoot, they can rip powder; but when it gets deep (as it does around here) I would prefer a little more ski under foot. This is a small gripe on an otherwise awesome ski; and if you’re a backcountry skier who also wants to rip the resort, then 95cm is more than sufficient.