Ortovox has been in the avalanche transceiver game for a few decades now since the launch of their analog single antenna F1 transceiver in 1989. Since then the technology and usability has evolved and along the way we reviewed their Zoom+ and 3+ Transceivers. Given that those reviews are now over a decade old it was high time we took a look at what Ortovox has been up to. In traditional Ortovox fashion, they are once again pushing the boundaries with their new Diract Voice Transceiver which is the first transceiver to incorporate voice navigation, making the search process more user-friendly and efficient. The Ortovox Diract is a compact 3-antenna avalanche transceiver that comes in two varieties, one with voice commands—the Diract Voice and the Diract that doesn’t incorporate the voice feature. This second option is $75 less and more of a traditional transceiver with visual screen cues and audio beeps and sounds to guide the user to their target. 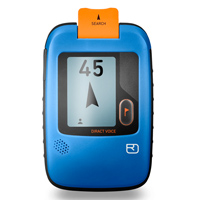 See the Diract Voice Transceiver in action in this short and informative promotional video from Ortovox.

With automatic voice commands at key points of your search, the Diract Voice Transceiver makes searching more efficient which saves precious seconds that could mean life or death for those you are searching for. The audio commands are simple, clearly spoken instructions confirming that you are in search mode, the correct direction to travel in, when to turn around and when to get closer to the snow for a fine search. In each phase of your search, these voice instructions help keep you calm which inevitably improves search times.

Upon start-up, you see a battery status measured in percentage as well as the option to perform a group check. After this an audio confirmation lets you know you are in send mode. 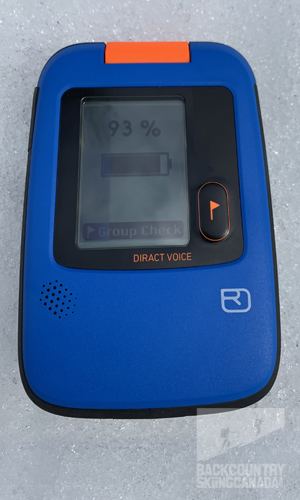 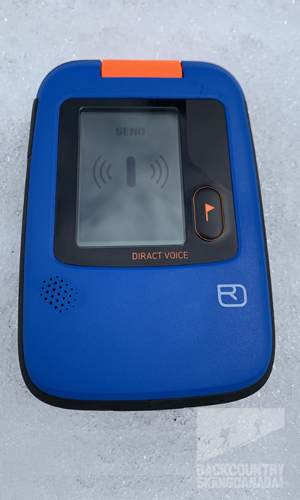 In search mode, you will see different graphics on the display for Signal Search, Coarse Search and Fine Search with voice commands for each. The second image below shows that a signal has been suppressed as the icon of a person is replaced with a flag icon. 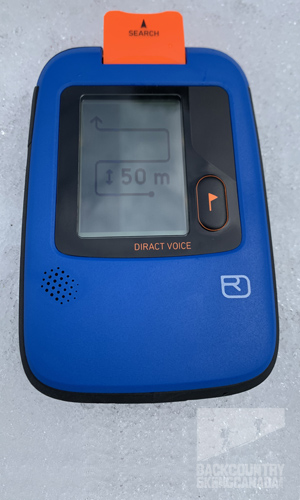 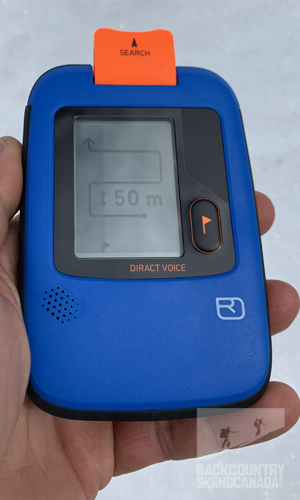 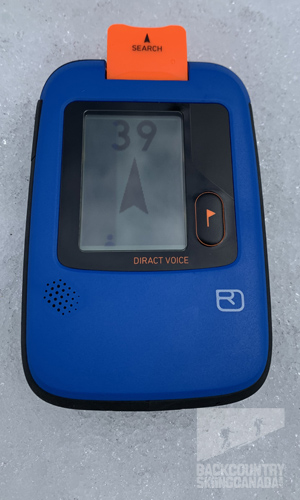 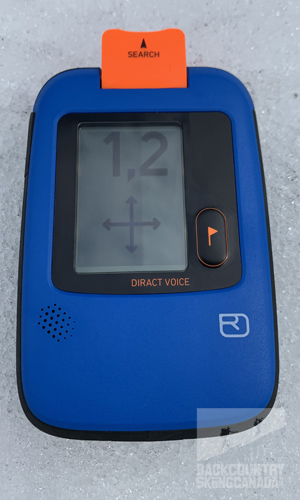 Below you can see the shut down sequence, with a confirmation requirement and then a service status update—very helpfull. 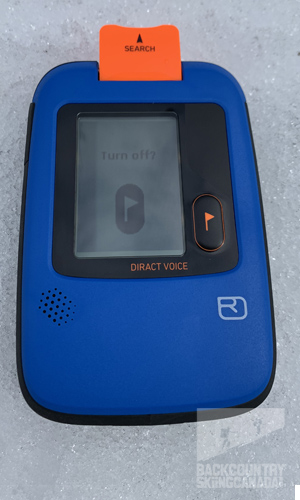 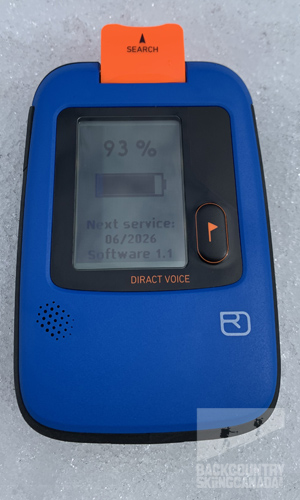 In addition to voice commands, the Diract Voice has three antennas and is equipped with Smart-Antenna Technology, which analyzes the device’s location in the avalanche and automatically switches to the best transmitting antenna. This saves searching time and also increases the device’s effective search range. The Diract Voice also incorporates secondary avalanche protection by automatically switching from search to transmit mode after two minutes of minimal movement. This ensures that if a second avalanche were to hit you that the Diract Voice Transceiver would protect you by auto-reverting to send mode. A final level of protection is the incorporation of a RECCO reflector integrated into the chest harness (included) to further increase your chances of being found in a slide. 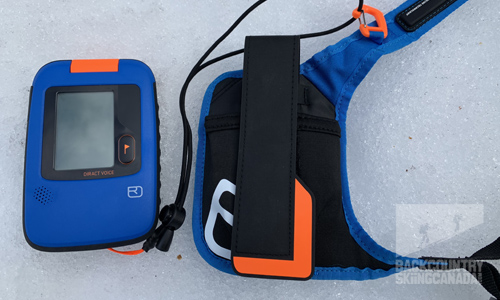 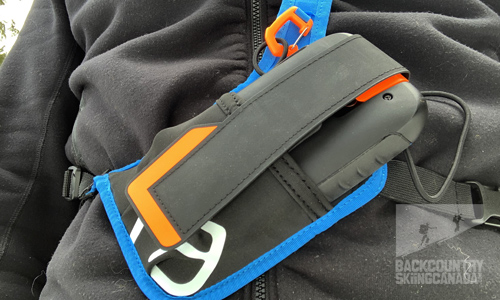 The Diract Voice Transceiver also considers the environment by using a long-lasting, rechargeable lithium-ion battery that works reliably at temperatures as low as -20°C. This means no more batteries to purchase and dispose of each season. 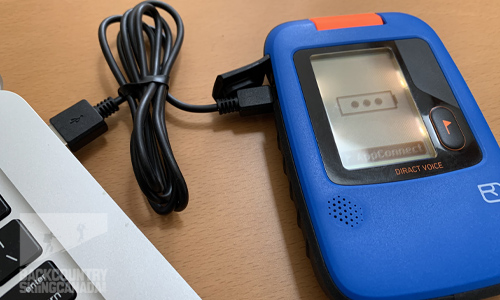 A thin rounded profile and modern design make the new Ortovox Diract Voice Transceiver easy to handle and wear in either the provided chest harness or a pant pocket. It has a streamlined, logical design with just one button to quickly flag and suppress signals. The rubberized grip zones found on each side of the Diract Voice provide a secure surface to grip even when wearing gloves. 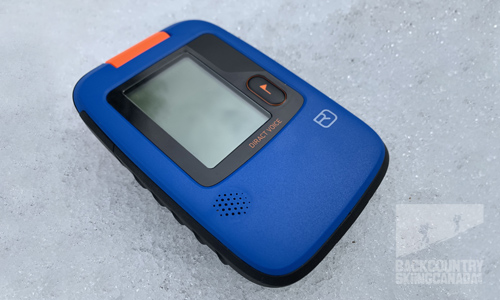 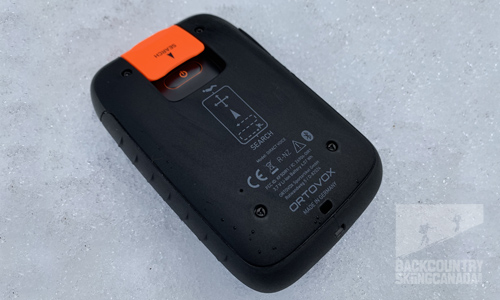 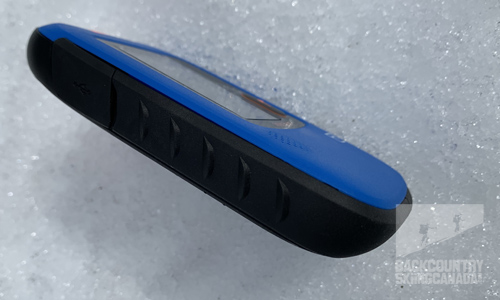 The full-graphic, extra-large screen is easy to read thanks to simple and clear instructions and the 360-degree real-time display which is easy to read in stressful search situations. To further help things, the display is backlit and illuminates when in search mode to make the screen easier to see no matter how sunny or dark it is. The photo below was taken at night to show just how bright it is. 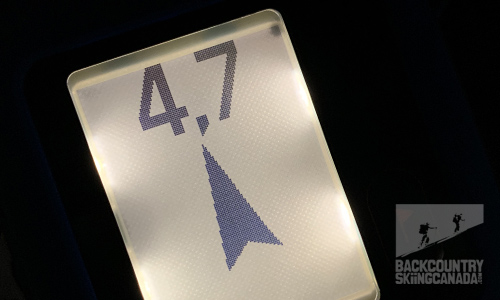 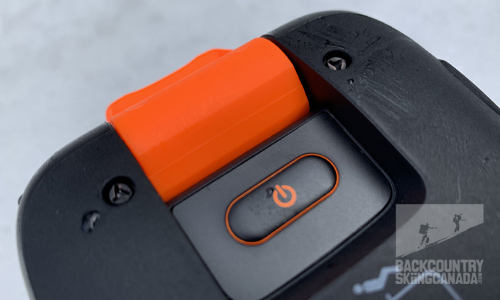 Adding voice navigation to a transceiver makes sense as it makes the very stressful task of locating buried subjects that much easier. While practicing avalanche scenarios and finding transceivers is easy enough for most, the added stress and pressure to perform under real-world circumstances makes even the most seasoned backcountry skier nervous, sloppy and slow. The fact that all transceivers rely mainly on visual cues by way of built-in screens to relay information to the user is a limitation when the searcher should really be focussing more on their surroundings and looking for information and visual clues on the snow's surface. Sure, there are the beeps and video game noises that most transceivers use to help inform a user when they are closing in on a target but they pale in comparison to the very useful spoken directions that the Ortovox Diract Voice Transceiver provides.

Not to worry though, the Diract Transceiver isn't talking at you for everything you do. It only tells you when you are in Send Mode (which is very useful) and again in each of the three stages of your search: Signal Search, Coarse Search and Fine Search. You’ll be told to continue in a direction, change direction, get close to the snow surface and when you are going in the wrong direction. These are all crucial instructions that you no longer have to think about and consider for yourself. You can think of the Diract Voice as the Google Maps directions of transceivers, only not in your car but in the backcountry.

I personally found the Diract Voice easy to use and a useful innovation to make searching much faster, especially for beginners new to ski touring. In addition to voice commands the Diract Voice Transceiver also has many other 'must-have' features such as the ability to flag a signal, update the firmware with the Ortovox app over wifi. You can also choose one of nine languages for the commands to be issued in so the Diract Voice is able to be used by skiers in several countries. It's also waterproof, there is a built-in Recco Rescue System reflector in the chest harness. The list of features and innovations goes on and on and one of the biggest for me is the fact that there are no replaceable batteries in the Diract Voice, instead, it uses a rechargeable Lithium-Ion battery. Some will love this feature as it means you no longer have to buy and dispose of hazardous batteries but, I can also see some people not wanting to rely on a non-removable rechargeable battery. Ortovox assures that it can be used in very cold temperatures without issue and if you are worried about longevity then you can always take along a battery pack if you are off the grid and away from an electricity source for an extended period of time.

On the downside, while I like the simple nature of the Diract Voice design I would like to see a status light incorporated into it so that I can tell it is powered on and transmitting while in the chest harness. Also, the screen flashes when in send mode and 'send' is not continually displayed which is not ideal when you want to know instantly whether or not the unit is on and transmitting. The screen however is backlit by four bright LEDs when in search mode and this makes searching in sunshine or darkness super easy.

Initially, I didn’t like the search switch on the top of the transceiver that you simply flip up to activate as I thought it could easily be bumped back into send mode, but after using it I see that Ortovox thought of this and ensures the design of it makes this virtually impossible. The big plus of this switch design is that everyone in your group can easily see that you are in search mode from a distance given the large orange switch protrudes from the Diract Voice. Another huge usability win!

If you are in the market for a new transceiver and like most backcountry skiers don’t practice as much as you should then the Diract Voice can help keep you sharp, efficient and on target but also,…. Please practice more no matter what transceiver you have, your friends will thank you.