New for the 20/21 ski season is Faction’s Agent 3.0 and 4.0 skis which get added to the existing Agent line of skis that were introduced last year. These skis are designed to be a lightweight touring option and build upon Faction's Prime skis which are more mountain touring focused. For the Agent Skis, Faction has used a lightweight Karuba wood core with a high-tech carbon weave and wrapped it all up in a progressive shape with a balanced flex and an engineered rocker design. The Agents are designed to be a versatile ski that as Faction says, are “Super-light for the up. Absolutely bomber on the down”. As with all Faction skis the Agents are designed in Verbier, Switzerland and handmade in Austria. 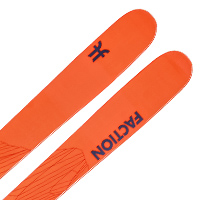 In this review we’ll focus on the Agent 3.0  which come with a stunning orange top sheet design that is both minimalist and graphic in nature.

The new Agent 3.0 Ski shape is heavily influenced by the current Faction Dictator Skis as the two share the same 134/106/124 dimensions and 21m turn radius. Where the Agent 3.0 differs is in weight as it is 720g lighter and therefore better suited for ski touring. 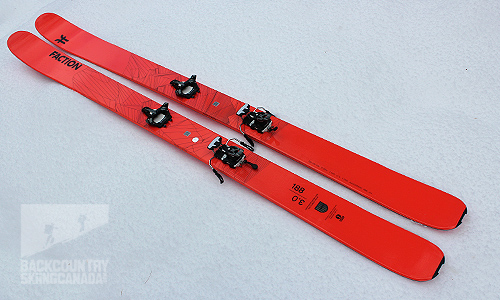 There is a generous amount of tip rocker on the Agent 103 skis so you know they’ll float with ease in deep snow. The sidecut on the shovels is almost straight which provides more surface area and helps improve the ski’s surfability and limits hooking. 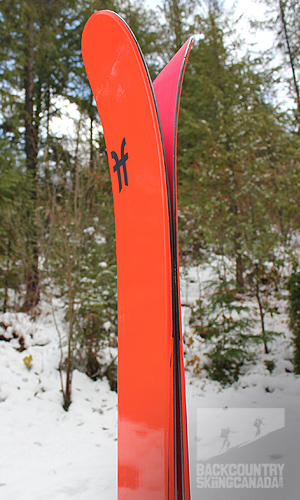 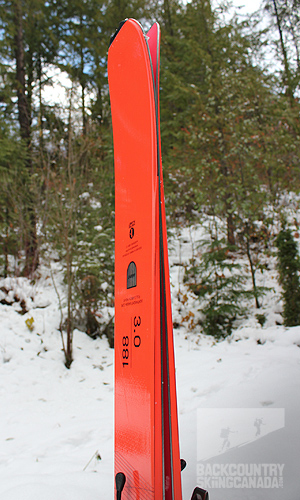 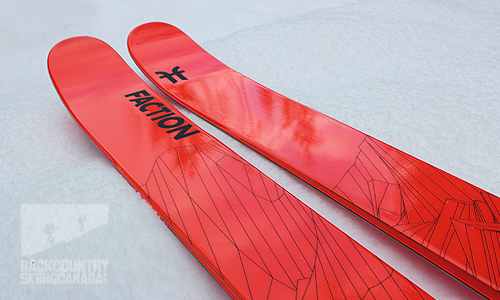 On the tails, you’ll find a progressive flare which allows for slarving turns but not so much that kick turns on the skin track are hampered. There is also a built-in durable tail cap with an integrated skin clip so that you can be assured your skins will never walk themselves off. The tails provide much more stiffness than the tips to improve stability and help finish off turns. 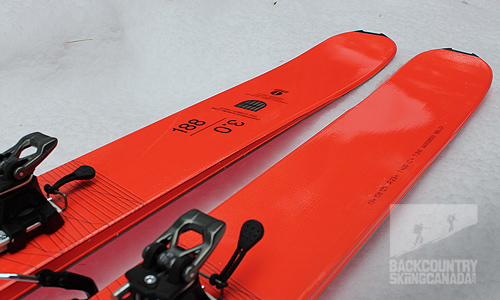 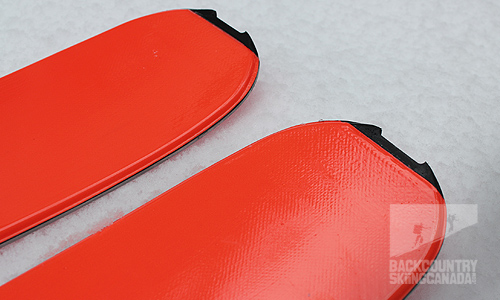 Underfoot you’ll find 4mm of traditional camber to help the ski rebound from one turn to another and increase the effective edge when the ski is laid over on edge. Directly underfoot in the middle of the ski Faction has embedded a Titanal Plate Underfoot to ensure that the bindings screws have something solid to bite into and maximize their retention. 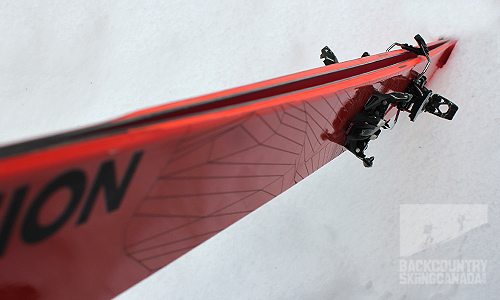 The 180cm length Agent 3.0 Skis have an average sidecut radius of 21m, with a longer radius underfoot and shorter radii in the tips and tails. This is meant to provide the benefits of both shorter and longer radii in a single ski, allowing for both hard-charging turns and speed dumping slashes.
The Full Carbon Weave found in the Agent 3.0’s construction keeps the ski lightweight yet torsionally stiff. Although the goal of the Agent 3.0 Skis was to be light, Faction used a thicker base and top sheet materials and also oversized 2.5mm-thick edges (which is more than the industry norm) to ensured that they were built to withstand some abuse. 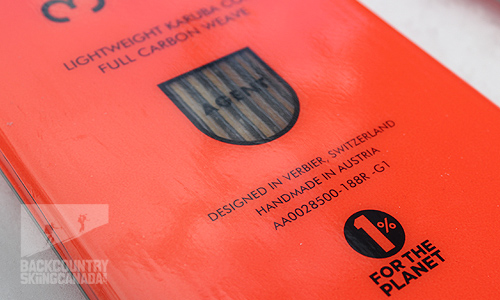 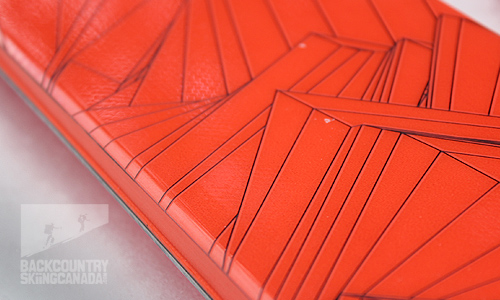 The Agent skis are best suited to Intermediate or Advanced and Expert skiers and as Sam Anthamatten (Freeride World Tour competitor and certified mountain guide) says, these are the "do-everything ski”.

The Agent 3.0 is a super fun ski, there is no getting around that. While it is more at home touring in deep soft snow, carving and slashing big wide turns it can also rail relatively well on groomers. As long as the snow is not super hard you are generally rewarded with a very stable ride—even at speed. You can feel the confident ride of the Agent 3.0’s at speed, just be sure to stay on them and be on the lookout for crud or other variable snow surfaces as these will challenge you to remain on course. Given how light the Agent 3.0’s are they do tend to deflect when faced with more aggressive snow conditions such as re-frozen groomers, chunder and chop. If you want something that can tame all conditions then the Faction Prime skis may be more to your liking—but remember, the Agent skis are designed to be light for touring efficiency.

In my testing, I found the Agent 3.0’s extremely fun in any kind of soft snow as they were very floaty and easy to turn. Slashing pow turns is effortless thanks to the tail rocker and the camber underfoot makes them come to life and rebounded nicely. While they were equally easy to carve on fresh groomers and provided a solid ride on consistent snow I did find them to be a little less controllable in bumps and hard crud. Their light weight means that they get pushed around more than I would like, but I wouldn’t buy these skis to lap bump runs or snake through the trees. These are a touring ski first and foremost. Having said that, however, I thoroughly enjoyed ripping fresh groomers and letting the skis open up and redline. The edge hold was impressive although they were not the snappiest when trying to lay down tight back to back short radius turns. Given how stiff the Agent 3.0’s are underfoot and in the tails I felt very confident driving them hard when the snow was consistent even if it wasn’t deep. The tips, even though they are softer than the rest of the skis were still fairly stiff and therefore tended to chatter a little on hardback and this vibration could be felt through the ski at speed, meaning you had to stay on them and ensure you were skiing them with authority.

The Agent 3.0’s traditional shape (134/106/124) and rocker profile means that it is very adept at conditions you’ll typically find in the backcountry. With a flex pattern that is similar to the Atomic Backland 107 or the Blizzard Zero G 105 skis, the Agent 3.0’s can similarly handle in-bounds terrain but that is definitely not what they were primarily designed for. This is a fun energetic ski that likes to roam the backcountry and once you let it outside to play you’ll see why.